Cool up the Coast Thursday 12 March

We were both up at 7am, and it was cold – below 10 degrees inside! There was some sun, but it took ages to warm up. We headed north west from Marton, towards Wanganui. On the way, we caught glimpses of Mt Ruepehu to the north, looking snowier than usual for March. We used the dump station at Waverley, and the Shell truckstop at Hawera. It took a while to realise that the pump was saying diesel was $0.989 – below a dollar. Who would have thought we’d see that again! As my old father used to say “Never confuse the impossible with the improbable”!

We found a park around the back of Stratford, and stopped for lunch. Wyn had a nap while I read up on the sights. It turned out that the Glockenspiel clock did its thing at 3pm, so we headed over to the main street. 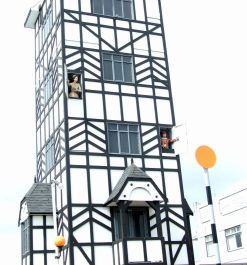 Sure enough, on the dot, Romeo and Juliet and some other dude popped out from different parts of the tower and recited bits of the Shakespearian play. 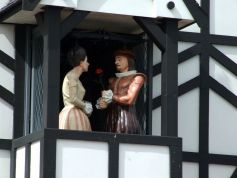 Lovely and wierd in the midst of all that cow country. We collected some pamphlets on things to do in Taranaki – it turns out they have a lot more than a mountain inside a cloud and grass.

It was windy again for the last bit to New Plymouth, where we arrived at the Belt Road camping ground at about 4:45pm. Our site had a great view of the port and the coast and the sea, and was even sheltered a bit from the strong wind. We had a great view of 5 lads busy collecting shellfish (pauau) from the rocks at low tide. And then of the Fisheries Officers arrive in numbers to bust them, presumably for undersize. There was lots of discussion, and someone with a big TV camera, all very interesting.