Once upon a time this was the most important hut in my universe. It was called Green Hut because it was green. This avoided confusion with Red Hut or Yellow Hut. Imaginative lot weren’t we? Green Hut is in the Silverpeaks, a hilly collection of ridges near Dunedin. Most tramping trips went past Green Hut one way or the other or both. At a hurtle, it was two hours from the edge of Dunedin and only another hour home. Some people had cars at Double Hill (it had two lumps!) but the rest of us walked home. Our parents had no idea where we disappeared to on Friday nights but we always returned home by Sunday evening. We flirted with hypothermia and beer and girls.

Sometimes we stayed in Green Hut. Sometimes we helped at working parties helping to keep Green Hut standing. It got more and more damaged. Some people wrote their initials with burnt sticks on the walls. I think the biggest initials said “RD”. Possums used to run over the roof. We used to run out and hit them with sticks and they’d run away. Then they’d come back and run over the roof. We’d hit them with sticks. Possums are very slow to learn.

Eventually what remained was demolished. It was probably a kindness. Now the place is known as the Green Hut site. The Place-Formerly-Known-As-Green-Hut. I’m glad I knew it and slept in it and sheltered in it from the storms. And I’m glad they didn’t replace it. There will only ever be one Green Hut.

Any guesses on who’s who in the photo? Any guesses as to the year it was taken? 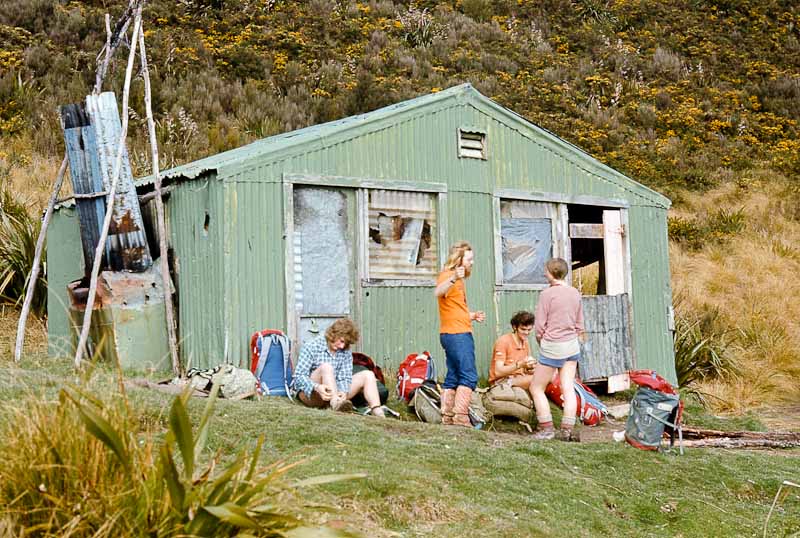 Green Hut in the Silverpeaks near Dunedin