So here we are, blobbing out in Blenheim. Having finished our first spell of motel minding, we’re trying to catch up on a few things plus get some exercise. Some time back I had fun resurrecting some of my old scanned transparencies. (If I called them ‘slides’ anyone under about 40 years old would have no idea what I was talking about. In the olden days transparencies/slides were viewed by projecting them onto a screen. The projectors had a sliding mechanism so that while one was in front of the bulb, another could be loaded before itself being slid in front of the bulb. Hence ‘slides’ I presume.)

Anyway, having dug some of my old tramping photos out for the Otago Tramping and Mountaineering Club 90th anniversary last month, I’m keen to share some more of them here.

Today’s photo is of The Mighty Mini. It’d be early 1970s so about 40 years ago! Mike Doig’s Mini was a mighty little machine. It was a bit like Dr Who’s Tardis. It could swallow people and packs like magic. I remember one daytrip which ended at Brighton in the days when there were boats for hire on the creek there and big icecreams at the shop and the Mini disgorged nine of us.

Plus it could go anywhere. I remember Mike getting it to the skidder site above Ben Rudds on the back of Flagstaff. And over Dunedin’s Northern Motorway when it was virtually impassable. We zoomed past where cars had stopped to put tyre chains on well below the big dip and still without chains crested Leith Saddle in a full-on blizzard with two of us perched on the bonnet for the extra bit of traction needed. This was after stranding the Mini in a snowdrift somewhere behind Middlemarch while searching for a way home with SH87 closed. All we had to do was lift the front of the mini out of the drift and around 180 degrees and we lived to try another route.

I have another memory of the Mini on SH87 one moonlit night zooming towards Middlemarch and the Rock and Pillars. It must have been a good winter for snow as the road was single lane in higher parts, with cleared snow banked up on either side of the road as high as the Mini. It was one of those times when you wondered if headlights were necessary, so we tried it; they weren’t. 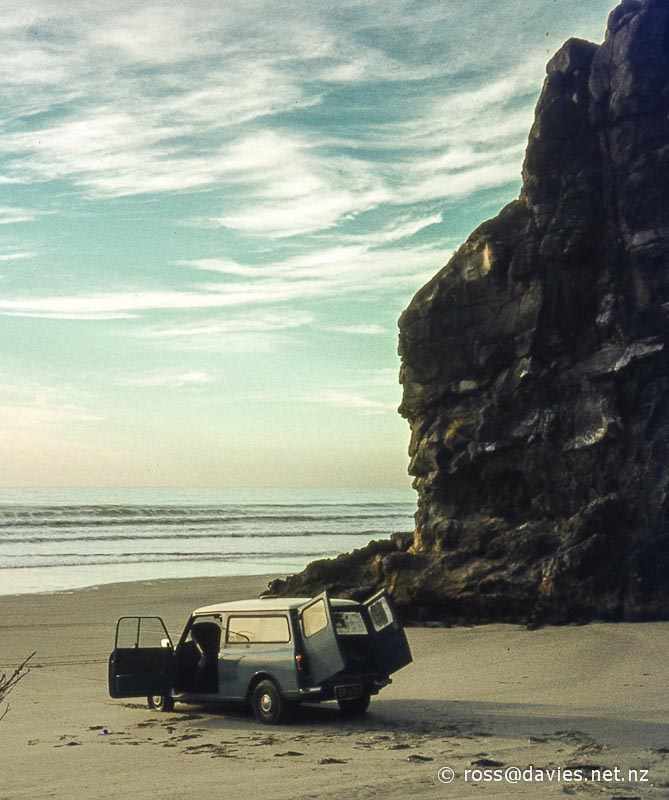 The photo of the Mini is at Long Beach, beside the rock climbing rock that juts out across the beach. We were there for the rock climbing and it was a very frosty Sunday morning. The sand was sort of frozen and the soft sand was hard. It was sort of a challenge to Mike and the Mini, and both were up to it. We drove down the sandy track to the beach and zoomed along the beach. At the south-eastern end of the beach we parked by a rock and posed for photos on the rock. When we went to drive off, the Mini bogged to the front axles. So we jumped out and lifted it out and took off slowly and safely.

After another photo op beside the rock climbing rock (Pinnacle) the Mini was returned to the proper car park while the sand was still solid. I don’t remember the days climbing but I sure remember the car. Mike’s Mighty Mini was a magnificent machine.

This entry was posted in Photo of the Day, Tramping and Climbing in 1970s and tagged 1970s, Long Beach, Mini, Otago, Tramping & Mountaineering. Bookmark the permalink.