Early last week the weather gods granted us a couple of good days for our planned walk to Cape Brett, out from the Bay of Islands. This walk had been on Wyn’s radar for over a decade and she gradually introduced the possibility to me this winter. And I gradually warmed to it although I wasn’t so sure about the “advanced” level for the track and the warnings about big cliffs. With the walk firmly in mind we launched into a three-week effort to get fit enough; good reason to get out and explore Northland.

Being flexible with time we kept examining the long-range weather forecasts and eventually settled on Monday and Tuesday of last week. It has been a windy, changeable spring but the forecast was for calmer weather for those two days so we locked them in and waited. And did we do well! We got  two of the better days for quite some time in a part of the country that gets some huge extremes; it does stick well out into the Pacific Ocean.

There is a lot of information available on the  Cape Brett walk including from the Department of Conservation and this did help us get prepared even if the warnings worried us. We decided from some reading up that a bit of cheating would be a good idea; that we could get a boat ride in to Deep Water Cove to reduce the length of the first day. Instead of 8 hours walking we could could get to the Cape in less than 3 hours. The suggestion somewhere was that this would put us in a better position to walk the whole track out to Rawhiti on the second day. It was an excellent idea which gave us a much better chance of enjoying the whole experience. We ordered up ourselves a water taxi and were waiting with eager anticipation at the beach at Kaingahoa Bay at 9am. 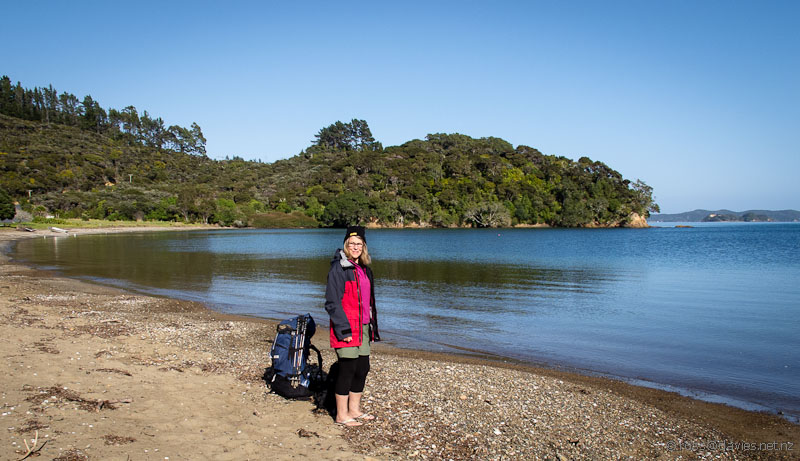 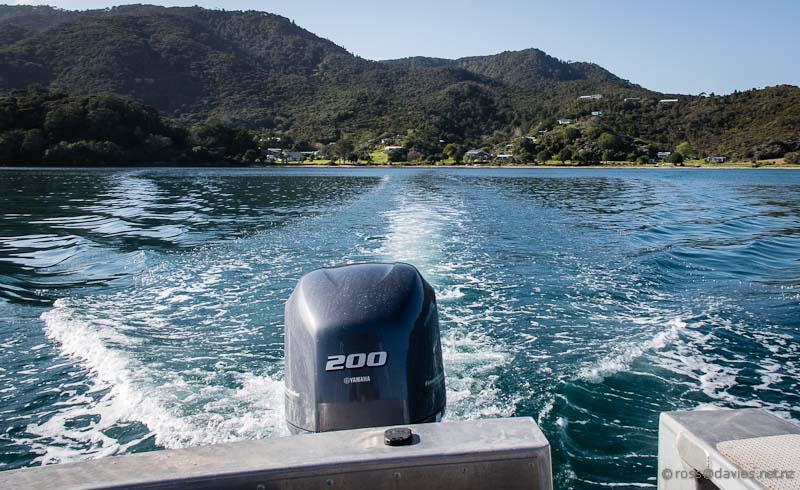 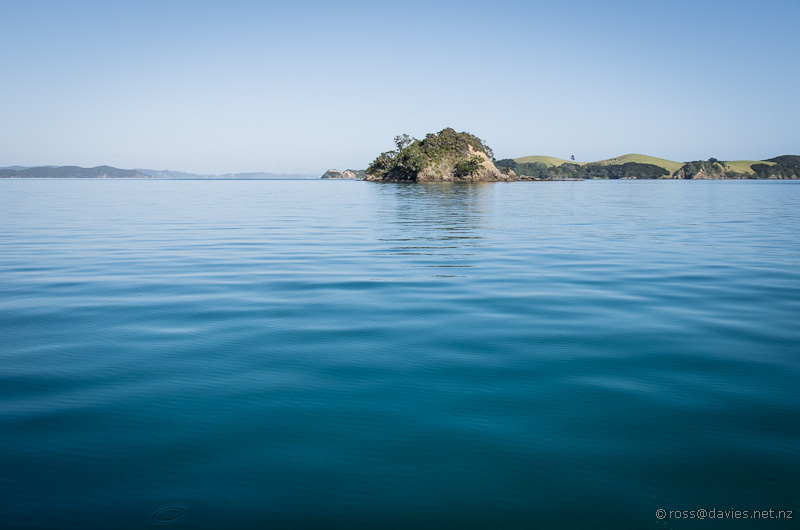 Never mind the effort we were saving, the boat ride to Deep Water Cove was worth it for the ride alone with stunning views of the Bay of Islands from the water. 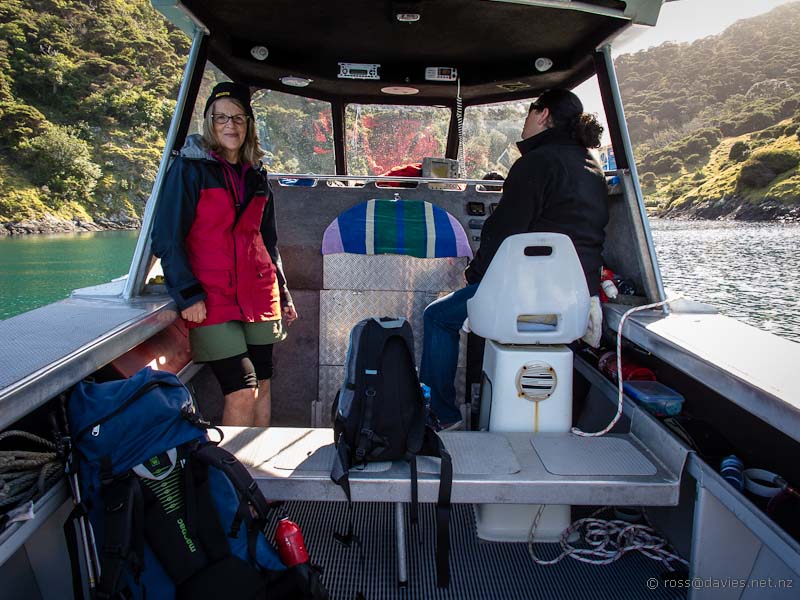 Wyn on the water taxi coming in to Deep Water Cove

We were dropped off and the boat zoomed off; leaving us in the quiet of Deep Water Cove, effectively with the Cape to ourselves. We were starting from sea level, and the only way from there was up. 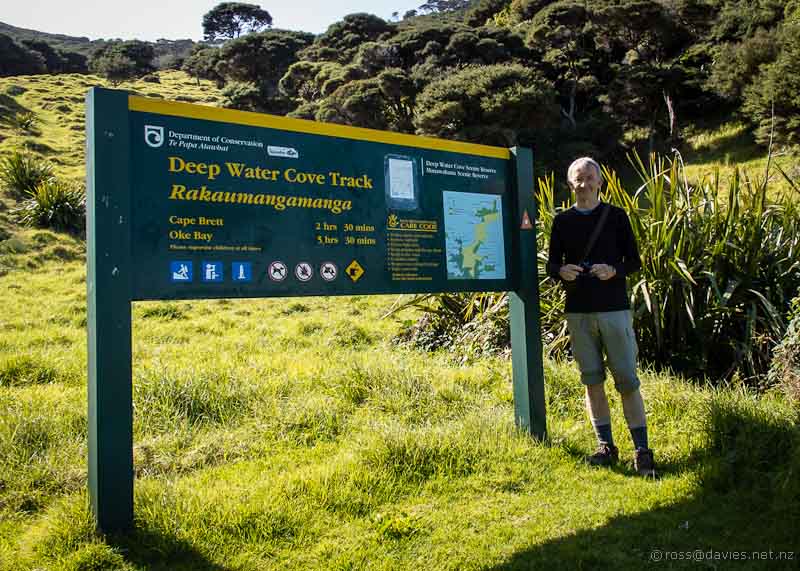 Start of the walk to Cape Brett at Deep Water Cove – a big sign for a big walk? [Note that I had developed one leg longer than the other hoping to cope better with walking around steep cliffs.] 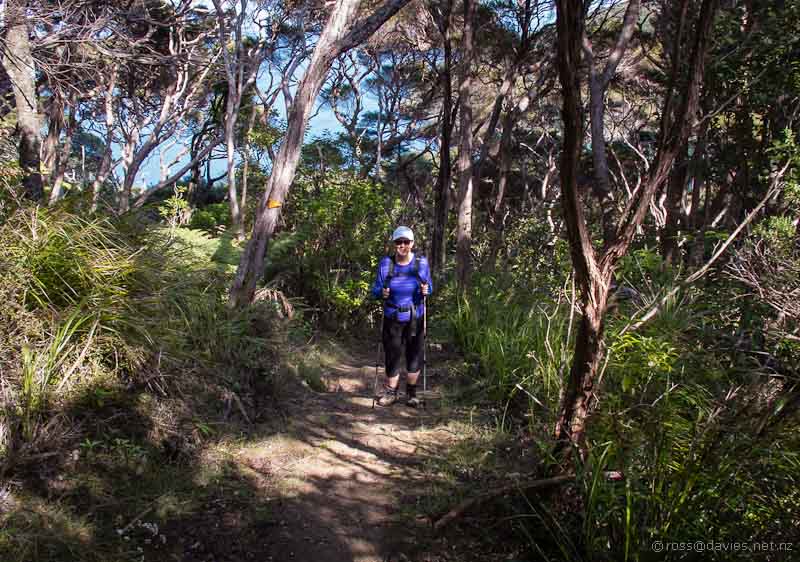 Wyn on the track climbing out of Deep Water Cove

Eventually we got higher and gained our first views of Cape Brett and where we were heading for. The views of the sea from the track are stunning; the clarity of the water is extraordinary. 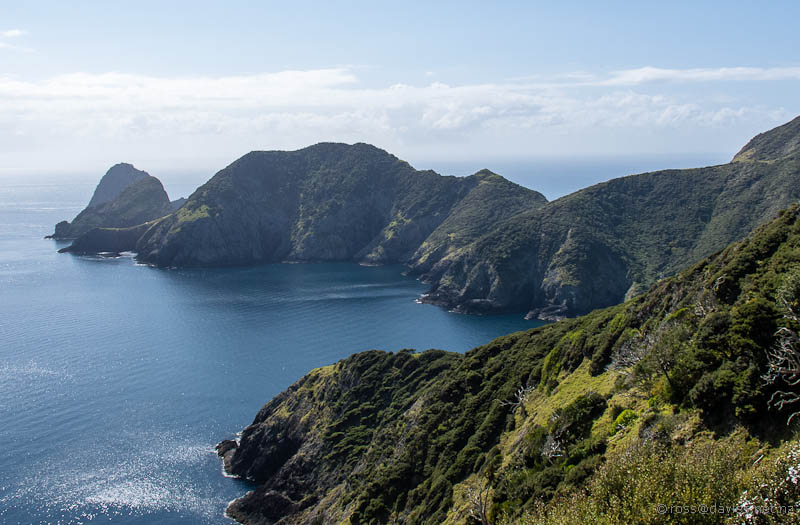 Cape Brett from the track – the track sidles around to the ridge in the distance and then follows the crest. 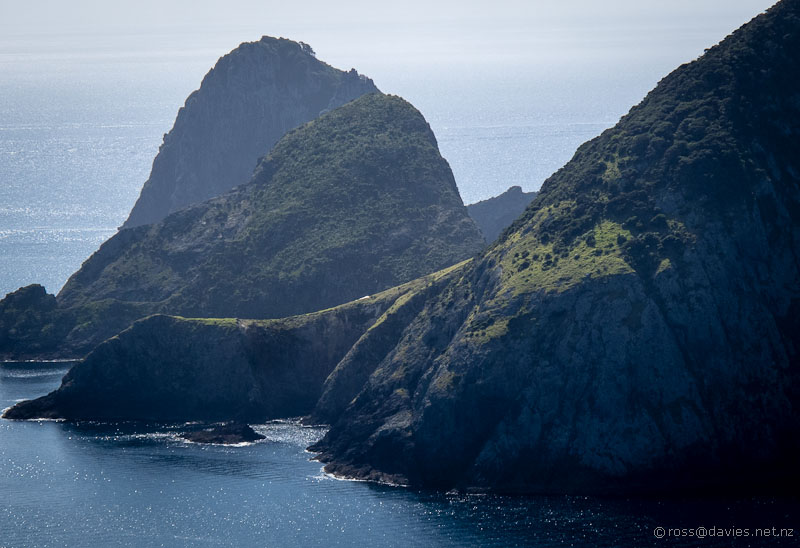 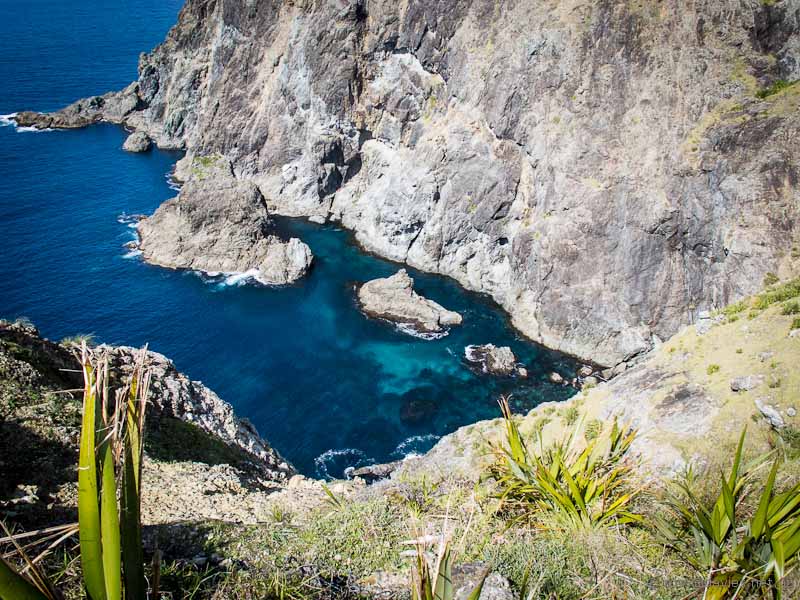 Soon enough we came to the ridge crest where it became clear that the east (far) side was the steeper one. I’ve become worse and worse with heights as the years have gone on, and hadn’t been looking forward to this part. But apprehension is good, so that when it turns out to not be so bad there is a lovely feeling of relief. So long as I didn’t get too close to the edge and get sucked over by the forces of Gravity then I was OK and I don’t think I squealed once. 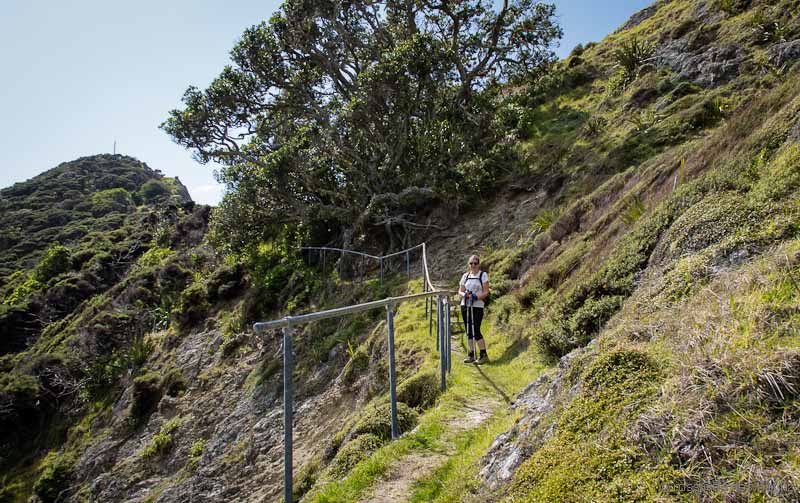 Track to Cape Brett on the west side of the ridge – the drop-offs from this section were not too scary.

Track to Cape Brett along the ridge crest. That’s the Hole In The Rock island out to sea. 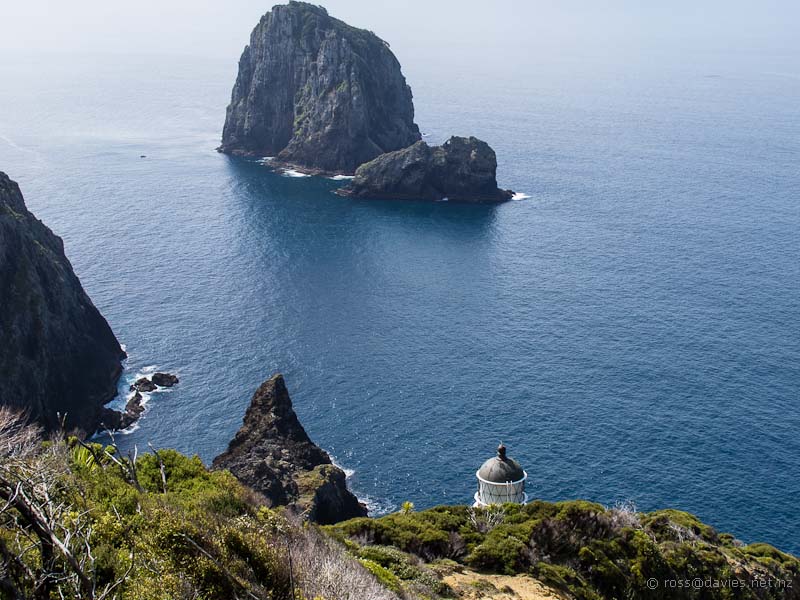 Cape Brett lighthouse from the track above – our first view of it.

The good thing about getting the boat to skip two thirds of the track was that it gave us plenty of time to enjoy the situation of the hut and the bay below. The hut had some great reading on the history of the lighthouse and the keepers and their families – there were three houses there when it was manned. This gave us a better appreciation of their isolation and how they lived and survived. When we arrived there was a dive boat in the bay below with divers out swimming with the seals and exploring the depths. Eventually they left and we had the place to ourselves.

It is a magical place and it was a magical day. Beside the sea was more like being beside a calm lake. 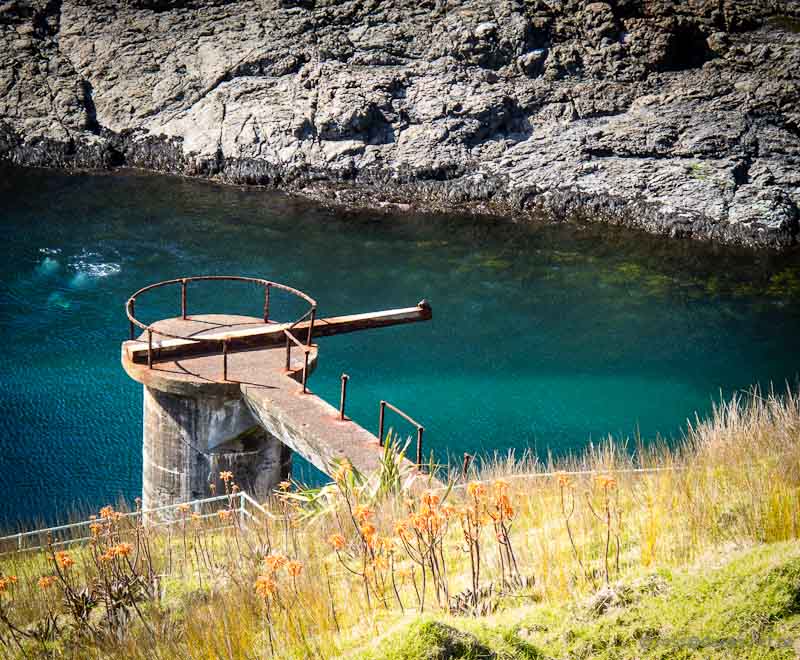 View of the bay and the old landing from below the Cape Brett hut. The bubbles on the top left are from a couple of the divers down below. 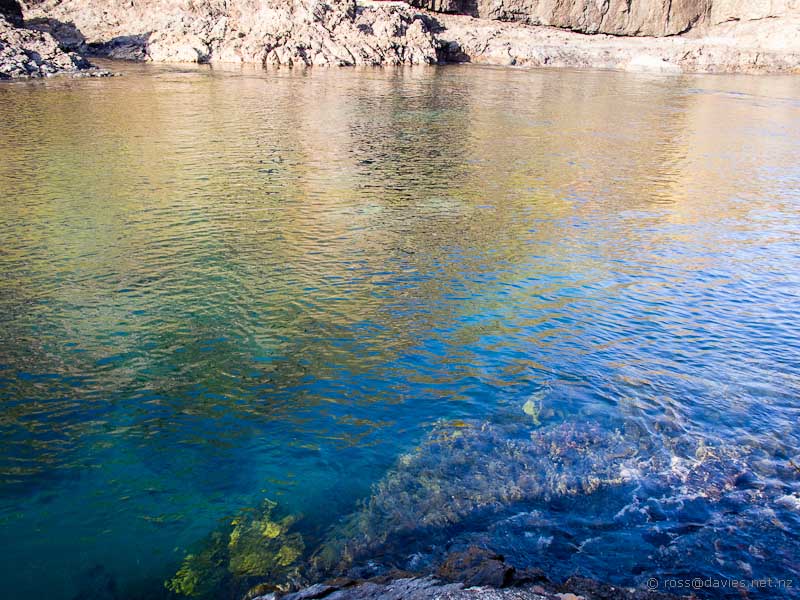 The bay below the Cape Brett Hut. At one stage a big stingray thing cruised by and we could see fish down in the depths. 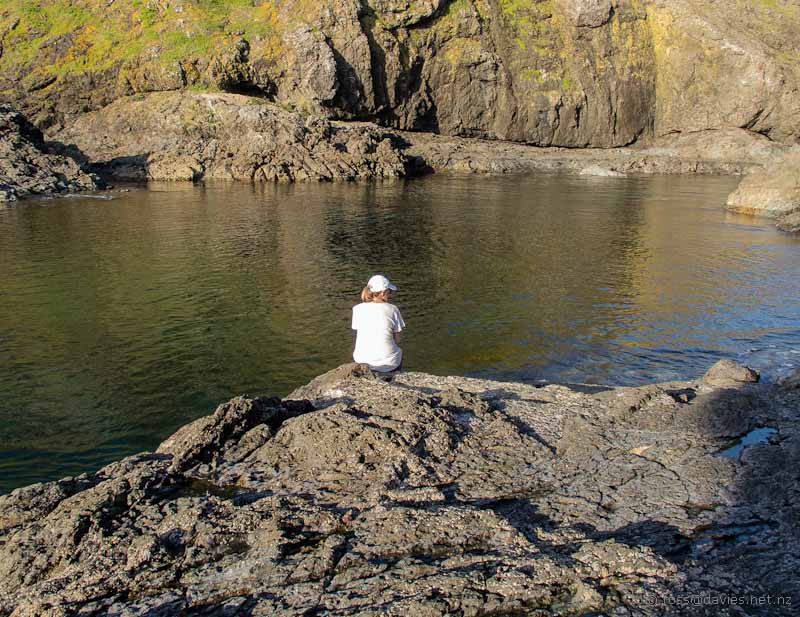 Wyn enjoying the afternoon below Cape Brett Hut. The most the sea could manage was a lazy lapping. 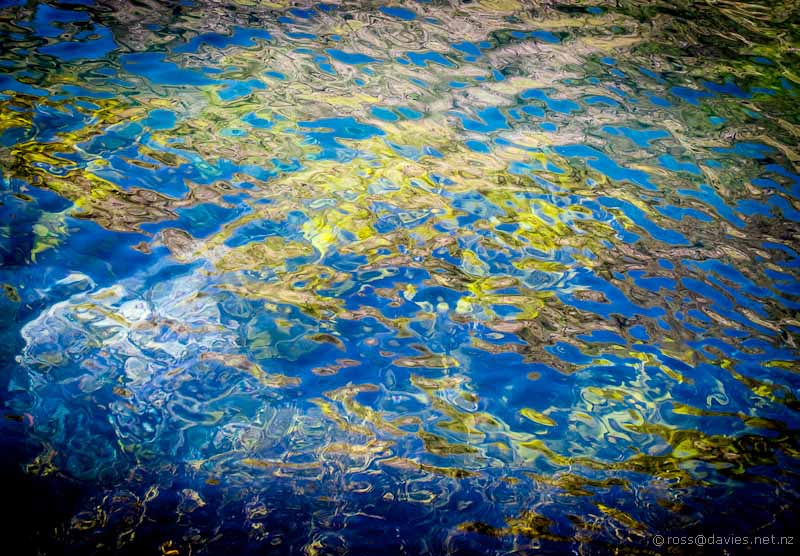 Abstract photo of the sea below Cape Brett Hut 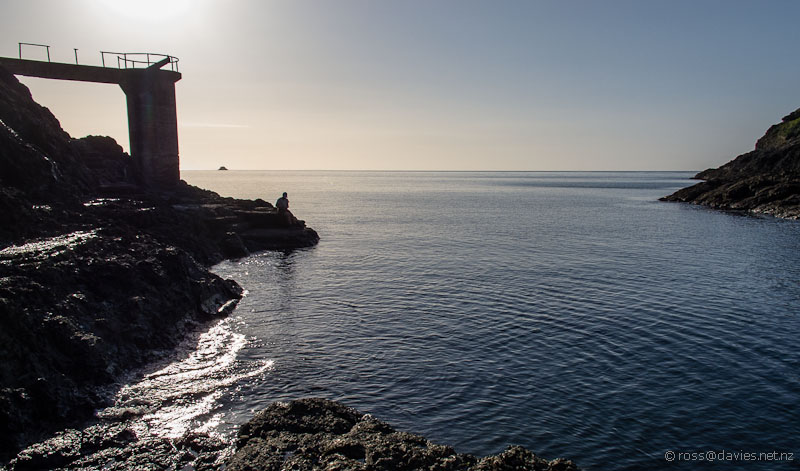 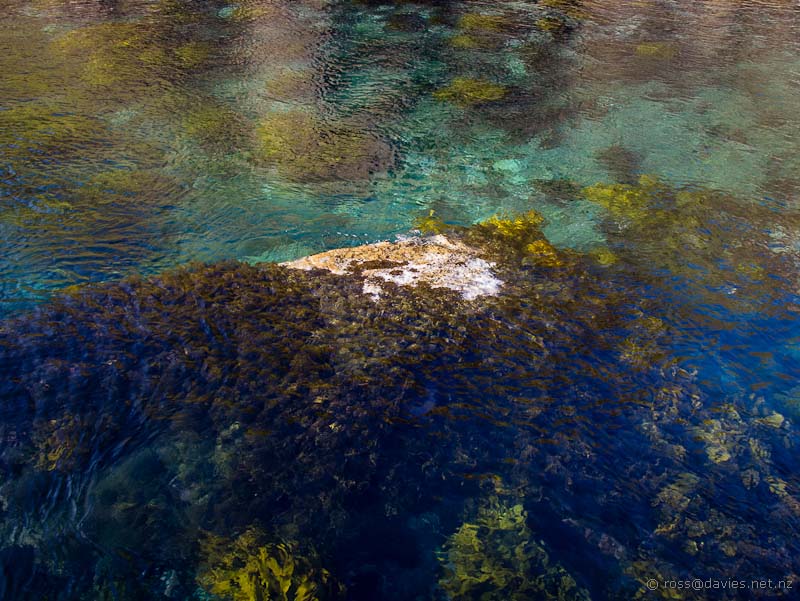 The sea below Cape Brett Hut 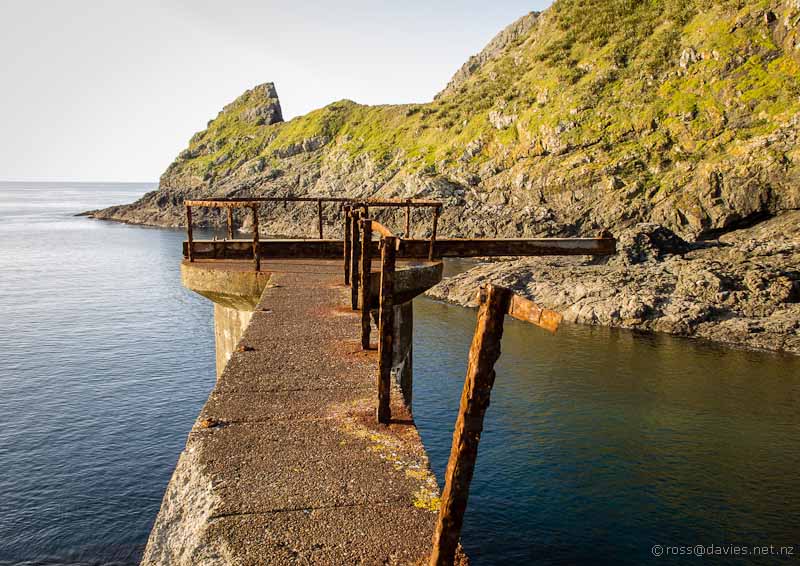 The old Cape Brett lighthouse landing. This would have had a crane and here everything for the lighthouse and the three houses and three families would have been landed from boats usually tossing in the sea. Periodically storm seas destroyed the superstructure on the landing.

Just as the sun was setting a couple of young French guys arrived to share the hut, having walked the full length of the track. We didn’t feel too too much like we’d cheated doing the shorter version, and we were grateful for having had the afternoon to enjoy the wonderful location. It is a day we’ll never forget. 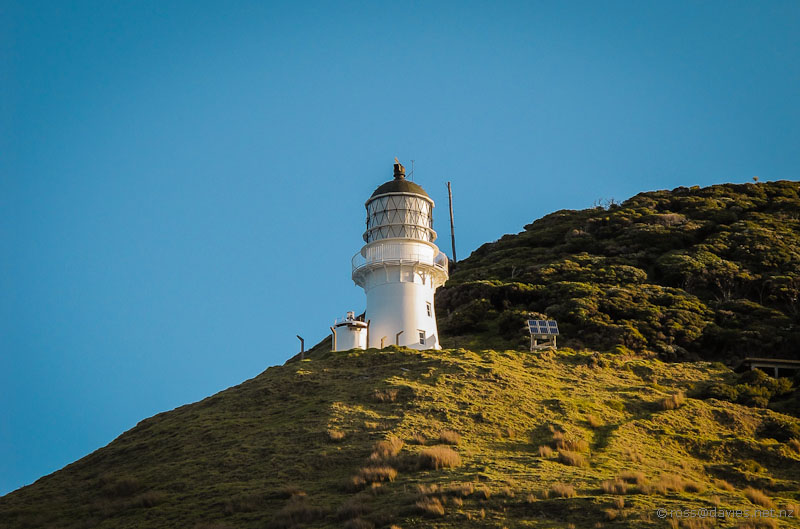 6 Responses to A Little Big Walk To Cape Brett

Leave a Reply to Robin and Jenny Benton Cancel reply