While we were in Penzance, we wanted to visit St Ives. It’s an interesting town not far north of Penzance. It used to be a fishing port but is now more of an art community and seaside town. But we’d had a big morning getting around St Michael’s Mount, and were running out of steam. We were also running out of time; this was our last day and opportunity. We were getting wary of parking and narrow streets and big crowds – it was England, Cornwall and Half Term respectively. We decided to drive to St Ives to see what we could see. As we were going to St Ives, we met … a lot of traffic leaving St Ives; and a lot of people going to St Ives. It was a bit of a nightmare and we were getting frazzled. For lack of any real idea where we wanted to be, we ended up driving straight through the town in a random (and frazzled) fashion.

We regrouped and drove back again, trying to decipher the Park-And-Ride signs while discussing what we wanted to see and whether we wanted to park anywhere. Somehow we ended up in a small car park beside a big beach near the Tate Gallery. It was predictably full, and I thought our chances of a park freeing up were five-eighths of not very much at all. Wyn thought we should wait a while but that proved unnecessary as a group immediately turned up to their car to leave. We had a bit of a sign/wave conversation with them and the park was ours. Except another hopeful car turned up and immediately thought they’d been lucky.

I was starting to think this wasn’t going so well but the departing folk had a sign conversation with the other lot explaining that we were at the head of the queue. In England that’s the end of the discussion, because generally English people are such a wonderfully polite and considerate lot. The interlopers drove off, probably to cruise St Ives for the reminder of the day in their quest for the Holy Grail, a vacant car park.

Meanwhile we passed by the Tate Gallery and cruised along the beach without actually venturing on the sand. The sand was mostly occupied, but again by very orderly groups all seeming to respect everyone else’s piece of beach. We stopped for a coffee with a nice view over the beach. 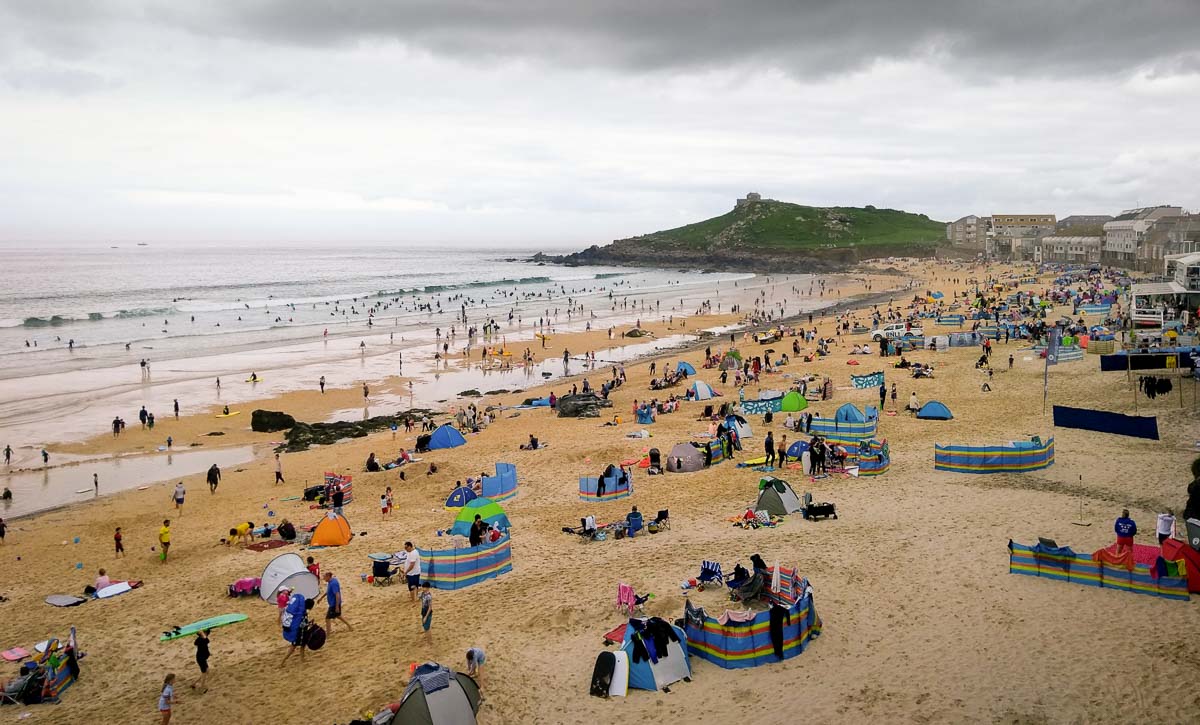 Half-Term holiday crowds enjoying one of the St Ives’ beaches

Google likes making my photos into panoramas, like this one of the beach at St Ives. Click on it for an enlarged view. Where’s Wally?

The beach pictures look a bit gloomy. But it was actually a very pleasant afternoon, and the clouds were more thundery than stormy. It was warm and calm and everyone was making the  most of it.

We walked on into the town centre, with lots of seaside resort shops and galleries. Come for a wander with us along some of the lovely little lanes of St Ives … 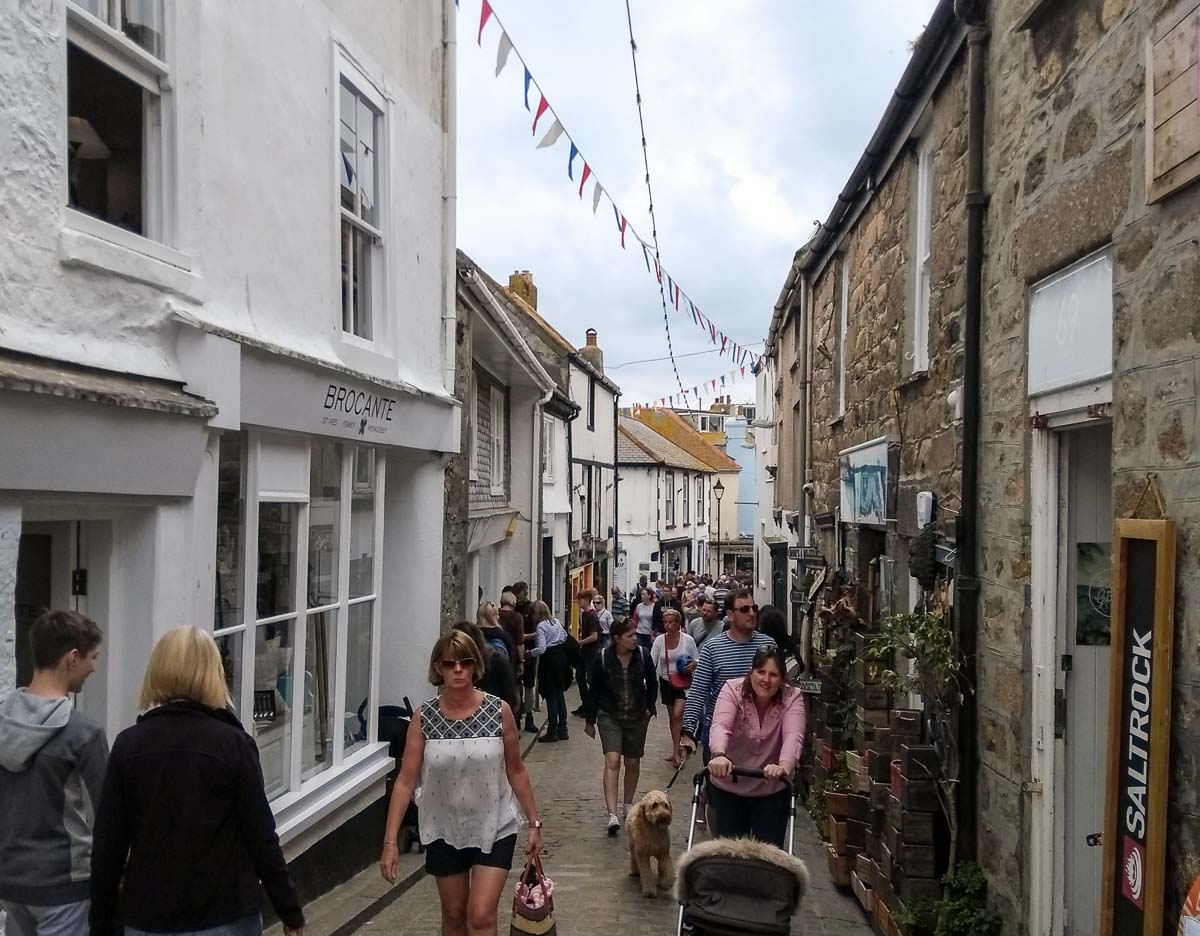 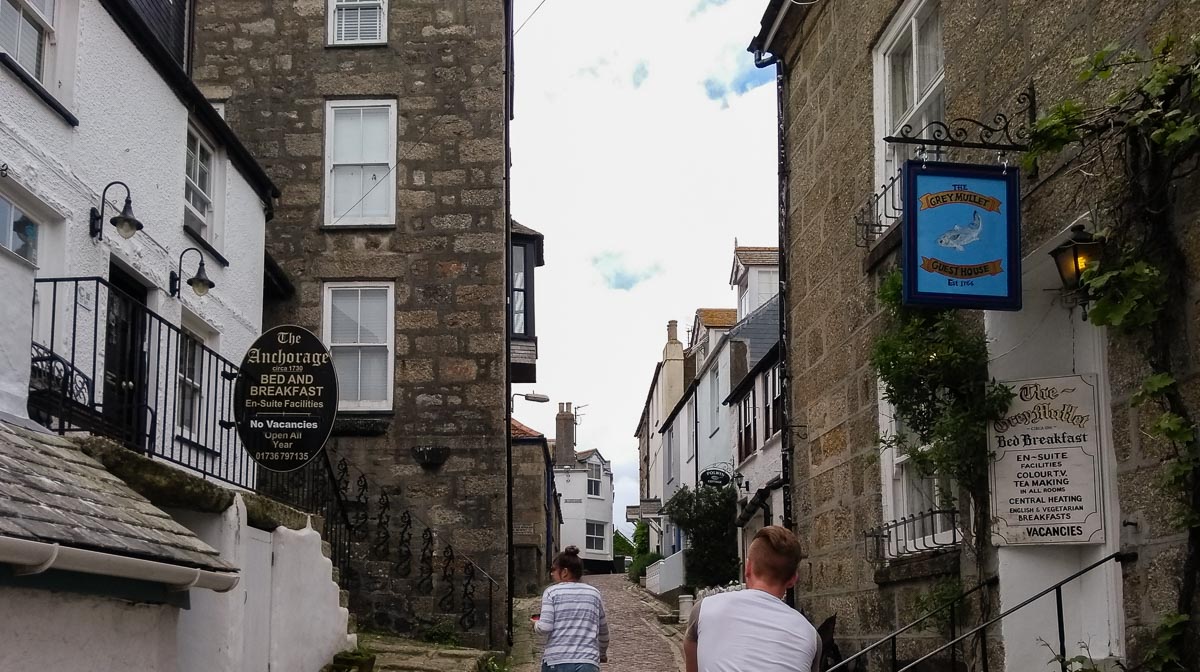 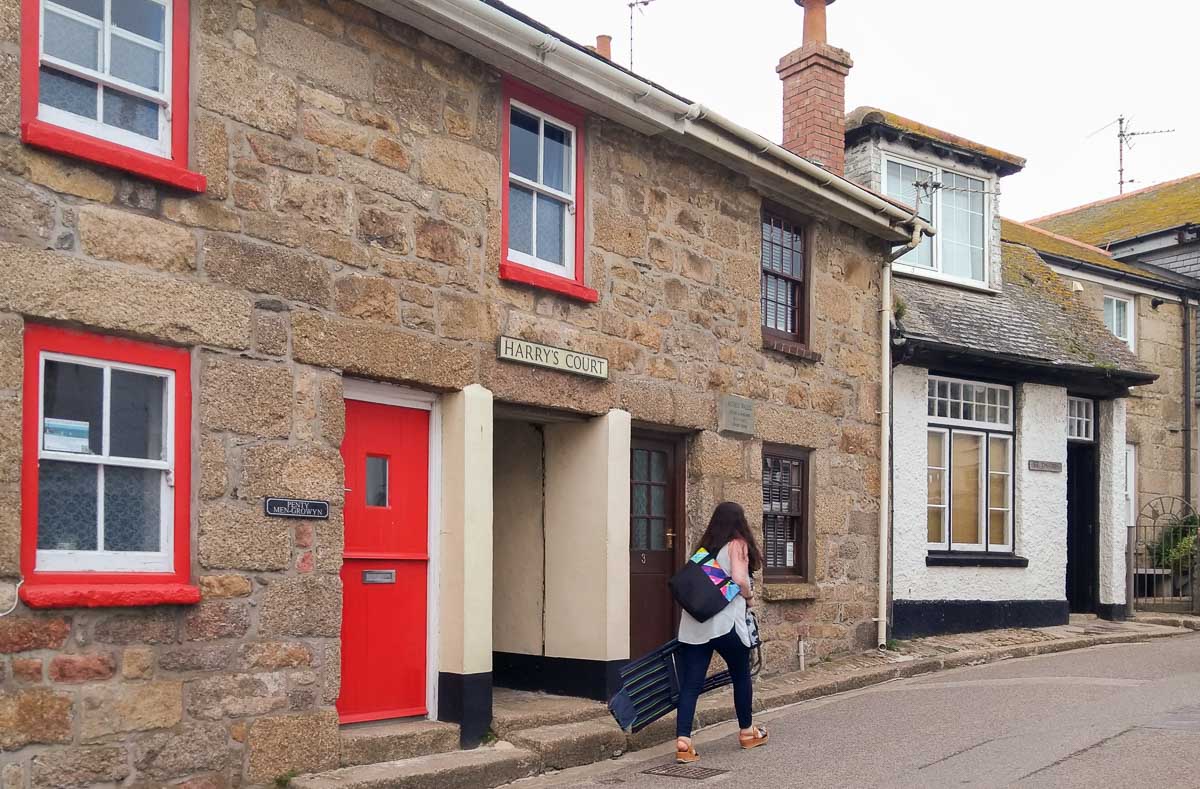 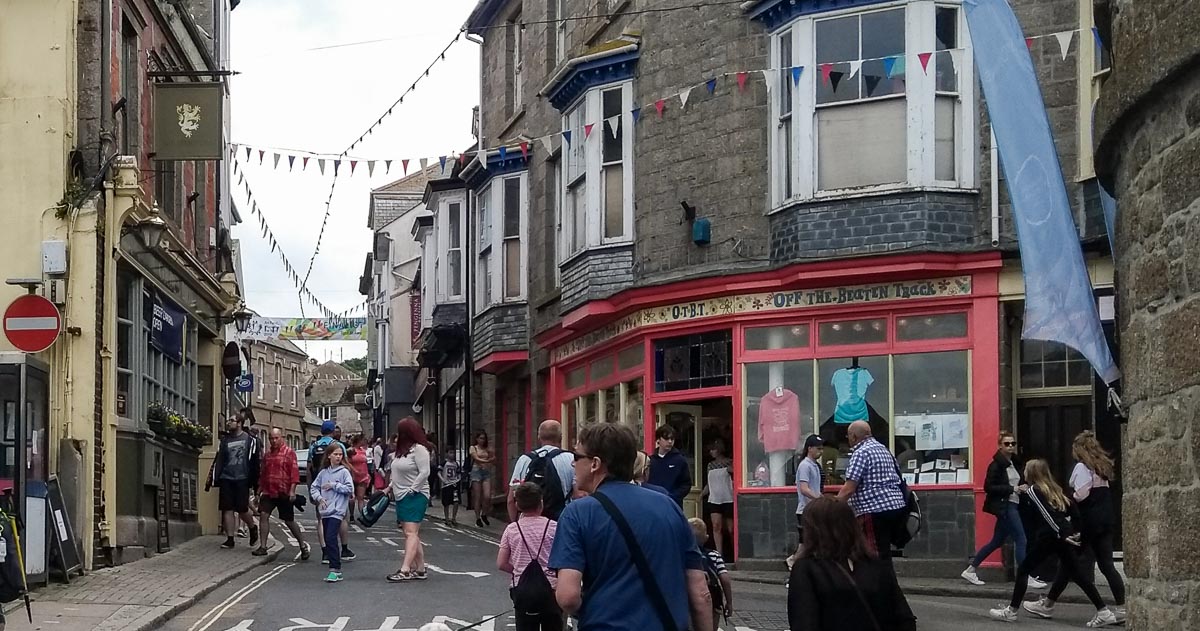 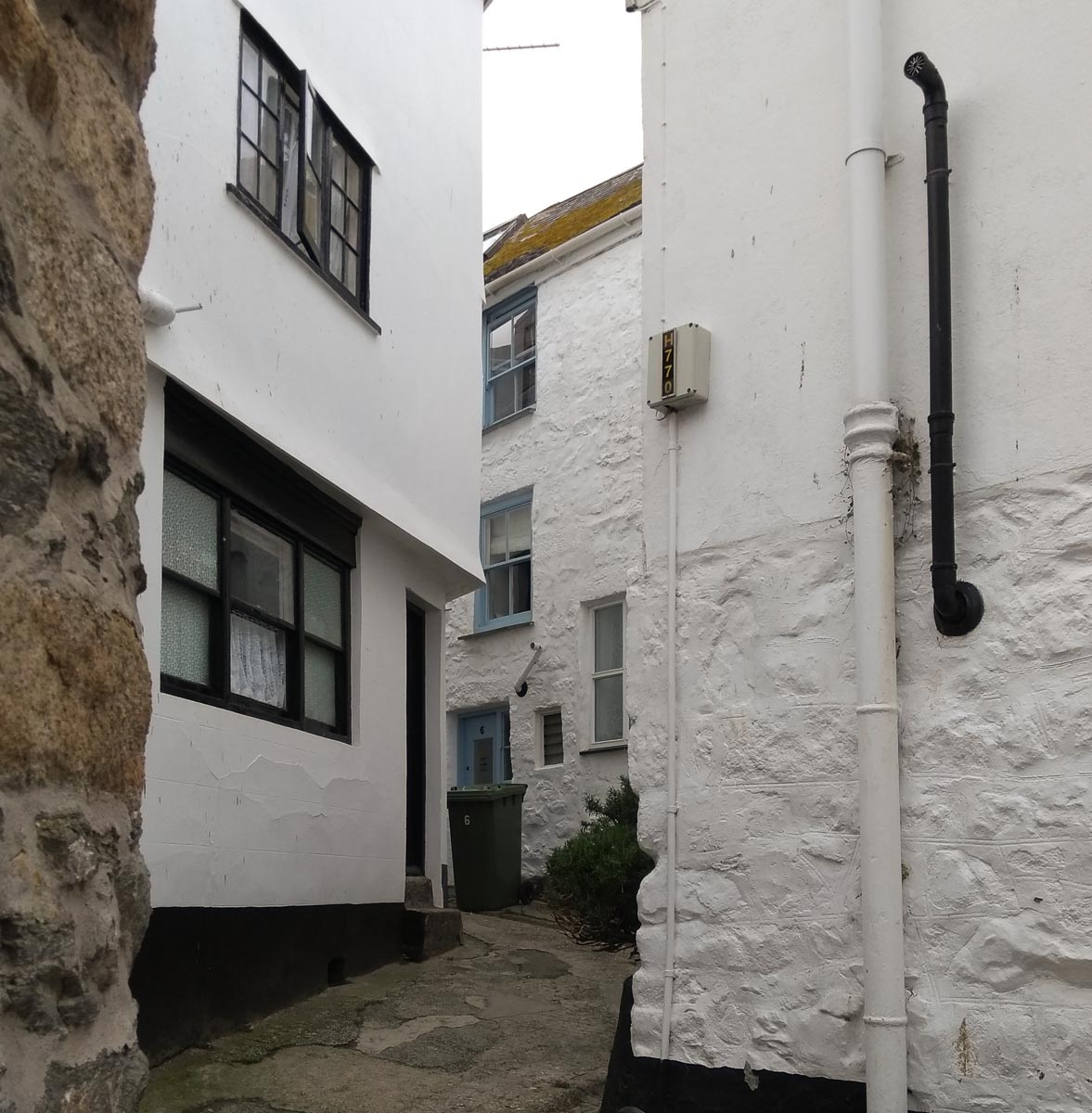 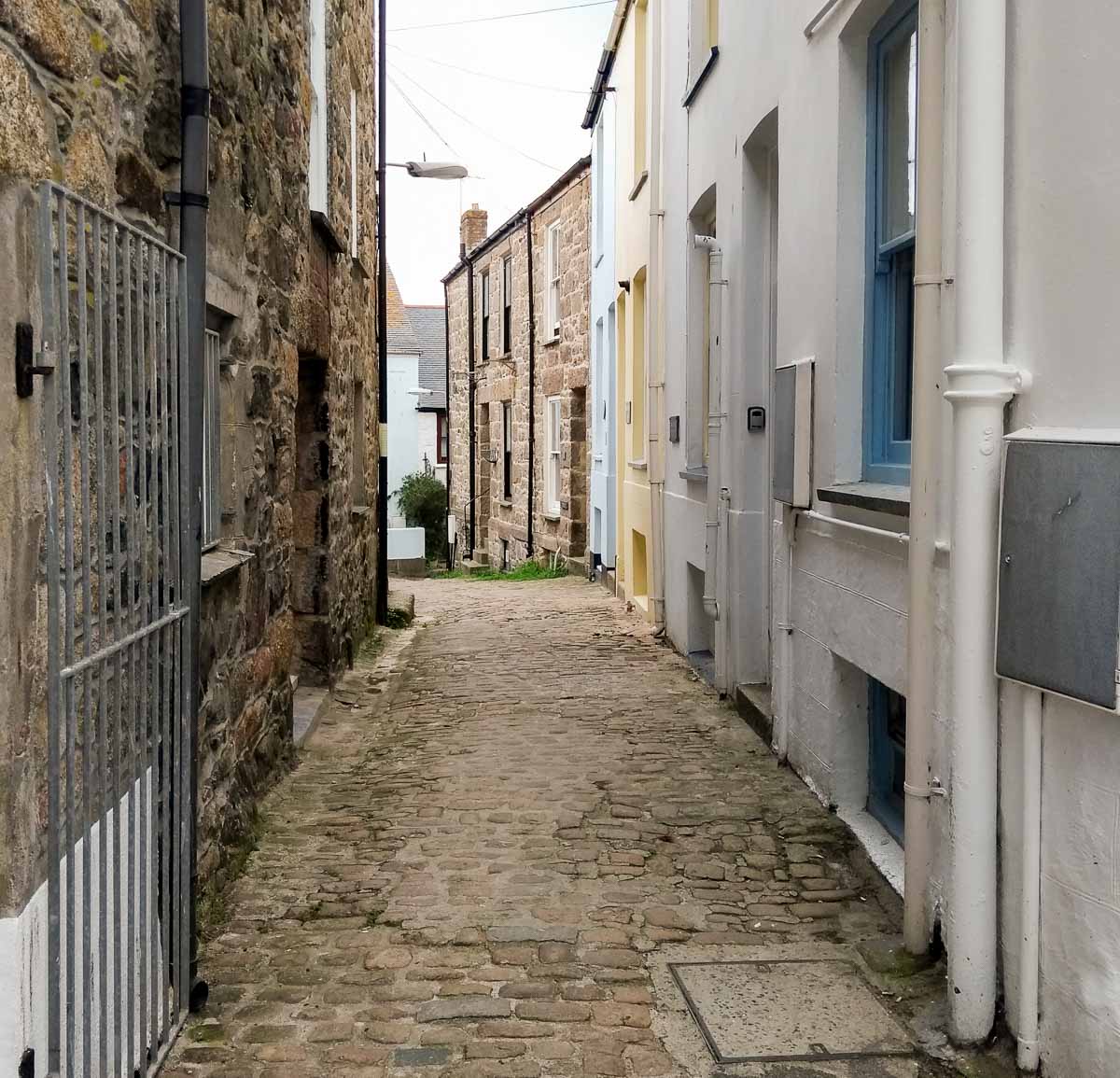 St Ives is a delightful place and is worth more time than we’d allowed ourselves. However, we were pleased to have persisted and at least gained a glimpse.