At last we were off to Auckland, on our way north – on Wednesday 24 June. From Waikete Hot Pools we went via back roads, through lovely countryside, to SH30. There was a final bit of heading south, to Upper Atamuri, then north, through Tokoroa to Cambridge. Nev the Nav directed us onto SH1B before we realised it, so we stuck with it. SH1B seems intended as a bypass of Hamilton. It is a torturous bypass, with lots of right-angle bends and intersections and turns. It was not a real route, just a jumble of secondary roads linked together with SH1B signs. It made the old Christchurch bypass from Templeton look direct. We finally rejoined SH1 at Taupiri, and pulled over beside the Waikato River for late lunch. We were opposite their hillside cemetery, and were intrigued by the number of cars going by that tooted. We couldn’t see a reason and wondered if it was people saying “hello” to Auntie up in the cemetery. It wasn’t long from there on to the Bombay Hills and our exit just beyond there to Pukekohe. It had been six months since we’d been there, but enough memory cells were rebooted to find our way to the Cosmopolitan Club without Nev’s help. We’re allowed to use the rear of their carpark, and were soon set up there for the night.
Next morning we woke to another frost, the 10th in a row. Some were mild, and several were hard ones. It was a rare run of them, and this was the last of them. We went around to Traillite to get a few things checked out. It was great to meet the team there again. We had lunch at the cafe along the road – we’d been there a few times as well. Traillite were busy, but managed to find some time for our things. It was going to take more than the day and they offered us use of their yard to stay the night.
So on Friday 26 June we woke in their yard almost 7 months to the day since our first night there in our brand new motorhome. We took the opportunity to shout morning tea for the staff – recognising that a big team made Suzi, and we’ve appreciated the workmanship and advice of them all. Suzi was ready to go mid-morning. We headed off to the shops continuing the search for a vase. It was raining heavily by then. From Pukekohe we headed up the motorway briefly, exiting at Manurewa and parking up at the Weymouth Cosmopolitan Club beside the Manukau Harbour. We took the car to call into the NZ Motor Caravan Association (NZMCA) to drop off more envelopes and pick up our mail. After struggling through the traffic we found the office, only to find it locked at 2.45pm. About then we remembered seeing something about it always being closed on Friday afternoons at 2pm. There is probably a reason, but it escaped me in the sheer frustration of missing our mail. It does seem weird closing an office for every Friday afternoon. We headed back out into the traffic and visited my uncle and aunt across Manurewa. Then it was back to the Cosmopolitan Club and Suzi for the night. 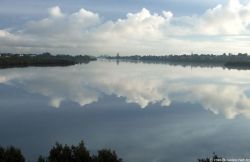 Saturday morning was foggy and calm, and it turned out the airport was closed for the morning. We could tell because we were on a flight path, and could also hear the big jets putting the foot down to take off. After lunch we took the car shopping at the Manukau Supercentre or whatever it is called. It was a big shop centre, with the likes of Harvey Normans and K-Mart and Briscoes all huddled together. After wandering around there and then drove on to the Manukau Westfield mall. This was a biggie, and eventually we found a vase. Then it was back to the Cosmopolitan Club; we packed up Suzi and headed back out onto the motorway. We weren’t going far so travelled separately – not hooking the car up. We exited at Spaghetti Junction and found our way down to the “Tank Farm” by the harbour where all the fuel storage tanks are. There were signs up saying No Parking, just for that night because of some event the next morning. It seemed bad luck; it was a lovely evening just 1km from the centre of the city. We ended up down a side street next to another motorhome. We were opposite the fish market, and wary of smells. It was a windy and wet night.
And Sunday morning was even windier and wetter. There were runners and cyclists zooming past the end of the street, but the weather was miserable so we didn’t go to find out what it was all about. After lunch we went in the car to visit Wyn’s uncle over on the North Shore. Since we were almost at the bridge, it didn’t take long to get over there, and back later in the afternoon. We moved Suzi round to the waterfront.

The weather wasn’t much good, but it is a great spot. We were fascinated to watch the river of car lights pouring onto the harbour bridge from the other side – presumably people coming from the North Shore for events in the city. Later in the evening there was a spectacular lightning storm. Some of the thunder indicated it was very close, and we learned later that the Sky Tower was hit by one – just a km out the back.