We were up early again on Thursday 2 July, keen to be on the road. It was a fine clear morning, and I was waiting for the sun to see if the solar panels were going to work. It was time to hitch up the car again, at last. We were on the road by 9am; we were heading north. We were soon past Waiwera where we stayed at the hot pools back in December last year. North of there neither of us had ventured for decades. We turned off to stop at Puhoi. It was a fabulous morning, lovely for wandering around sleepy towns. A check of the solar panels showed we were making 11Ah, enough to confirm they were working and working well. An hour later at 11am I saw the figure 14.9Ah, and I was happy with the improvements. Ecstatic was probably a better description. We’ve only seen figures as high as 6 or 7Ah in the middle of good days lately, and have never seen anything over 14Ah in the middle of summer. At this time of year we would expect about half our summer output, that’s why we have struggled in these winter months. Doubling the solar generation has more than doubled our generation – it looks like the clever new controller is at work already. 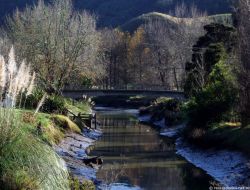 Puhoi is a lovely little town, just off SH1. Apparently settled by Bohemians from Bohemia in the Czech Republic. We’ll have to go back when the museum is open, it is an incredible story. 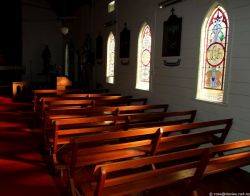 There is a lovely little church, and a pub we’ll have to go back to as well – the bar looks very interesting. 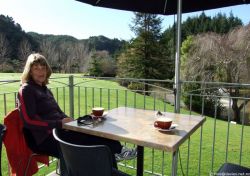 We drove on up to the cheese factory for a nice coffee in very peaceful surroundings. And we came away with a supply of their Bohemian Blue which is great. The cheese is great, and it’s great we’ve got enough to last us for a couple of weeks.
We drove on up SH1; it wasn’t long before we were at Warkworth, where we found a park and walked around the town for a while. They’re developing their river front, and doing a nice job of it. Eventually we headed towards Sandspit and a NZMCA member’s parkover place. This was a lovely rural property, where the noisiest noise in the mornings was the birds. The weather was OK (the best part of the day was the first part) and the forecast was uncertain, so we figured we’d go for a drive in the car while we could. We headed out to Leigh and the Goat Island marine reserve. It was windy, and the tide was almost full and the rocks were almost covered, so the fish watching was not the best. 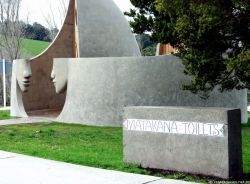 We had a quick walk around Matakana, and admired their new public toilets; we’ll have to post a photo (done). Meanwhile, if you can imagine the Sydney Opera House shape for a couple of outside toilets, you’ll have an idea. It was getting dark by the time we got back to Suzi; it had been a good day of discovery.
Friday dawned clear and sunny; it was time to find the shorts and sandals – Yahooo! We packed up lunch and headed off in the car for a day out. Just past Matakana is the Morris and James pottery place; fabulously glazed big garden planters and lots of other stuff. They have a free tour at 11.30am, and with no other takers we had our own guided tour of the whole process – very interesting. We then headed back out to the Goat Island marine reserve. 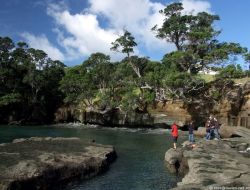 This time the tide was more favourable, and we spent ages watching the fish from the rocks. 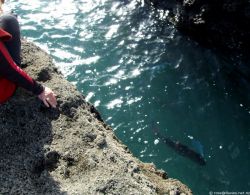 There were several colourful blue Maomao and lots of Snapper, some big. It is so impressive being able to just watch them in the sea. There were a few divers, but no snorkelers; someone said the water temperature is 13 degrees. 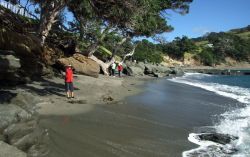 From there we went a short way along the road to Cape Rodney – a great viewpoint over the sea; from Bream Head at Whangareri in the north, around to Cape Colville at the top of the Coromandel to the east. In between were lots of islands; the Hen and Chickens to the north, Great Barrier Island to the East, and closer in Little Barrier Island. 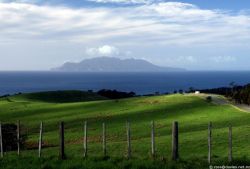 It may be called little, but it is an impressive island, rising steeply out of the sea to 722m.
Then we drove out to the Tawharanui Regional Park. 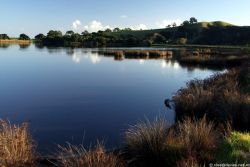 This is an Auckland Regional Council Park, a coastal farm park. 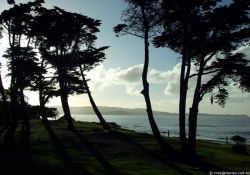 The headland is guarded by a predator-free fence, and driving in involves driving through the fence. We took our (late) lunch onto the beach at Anchor Bay and sat and watched some surfers. 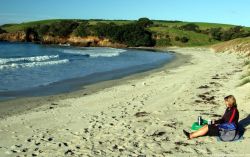 Picnicking on the beach in early July was a novelty for us; at last it was a bit warmer – somewhere around 16 degrees was the maximum for the day. 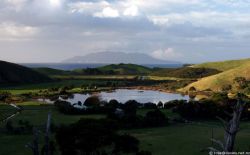 On the way back to Suzi, we drove down to Sandspit just as the sun set.

We spent a while watching the comings and goings on the wharf; it was a lovely calm evening. I made some mushroom and bacon pasta for tea and later Wyn whipped up a chocolate spongy pud in the microwave – we were on power at the parkover. It was a good way to end a great day.