We woke yesterday to blue skies and sunshine. It was cold for a start at 10 degrees, but it was going to be a better day. I was up early and found a spot under the bed/stairs to work on catching up the blog. Laura was asleep in the lounge – it had been a long day on Wednesday. The weather forecast ahead is not good for the weekend, so we decided to make the most of the day. We wanted a nice day to walk around Russell and figured this was our chance. We had a leisurely breakfast and it was closer to the middle of the day by the time we drove the couple of kilometres into Paihia. We found the car park up the street, and were a bit surprised to find it was Pay and Display and $1 per hour. Out in the street was P60, but a check of the fine print showed that this is only for October to April. It is nice to have some advantage for being here in the middle of winter. We parked in the street.
We headed for the wharf to find a ferry across to Russell. There were three to choose from, and we went for the cheapest which was also the quickest – it was $1 cheaper than the one with the smiley face – not sure what that says. It was less than 10 minutes across. The day was cloudier by the time we got there, with good spells of sunshine.

We started with a walk along the beach to Pompallier House. We baulked at the $7 admission cost, and went along the street to the Department of Conservation for information on walks and what to see. Except they were closed. The sign on the door said Closed for Lunch. What is it about DOC that the staff all has to have lunch together? Why do they expect their customers to not want their services in the middle of the day? How does every other business and service manage to avoid staff starvation yet DOC has to close? Maybe a better name for them would be Department Often Closed. This was dumb but still short of the most ridiculous DOC closure I ever saw. Some years ago I called into the DOC office in the middle of the Totaranui Camp in the early part of January. The camp was packed with probably something like a thousand people. The only services for miles around were provided by the DOC office, and there must have been a number of staff. I cannot be sure because on the door was the Closed For Lunch sign. Then there was the time at the DOC office in Te Anau at 4.30pm one April…. but I digress ….
It was a nice day so we left the staff to their lunch, and managed to get a leaflet on walks around Russell from the Museum. 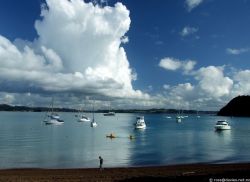 We wandered back to the other end of the beach and found our way up to the flagstaff. This was the one chopped down 4 times by Hone Heke or his mates – the story seemed to vary a bit. One said he’d specifically promised to not chop it down so one of his allies did. And this wasn’t the one he chopped down all the time. After the fourth lowering they’d given up on it for a decade or so. Finally a big bunch of the local Maoris put up a new one in 1857 as a friendly gesture. It hasn’t been chopped down since. I think there might be a moral in that tale…
Just along from the flagpole is a mosaic sun-dial viewing spot, and it is a great viewpoint with 360 degrees of outlook. It was sheltered from the breeze and we sat enjoying our lunch and the views and the sunshine. Finally we headed down again to Russell, and wandered around more of the town. The Church of Christ was lovely – the oldest church still standing in the country. And cool with holes from musket balls in the battle of 1845.
The DOC office advertised an audio-visual presentation on the history of Russell, and we were tired from all our walking around, so we headed there at 3.30pm. This time there was a sign on the door saying Closed for the Day. It turned out that they were only open from 10am – 3pm in winter. And their lunch closure meant they were closed for 20% of those limited hours. Truly, they are the Department Often Closed. We were better off anyway as we found a nice seat in the sun by the beach and enjoyed the last of our biscuits and soaked up the rays. It was a gorgeous afternoon, sheltered in the bay. We could take any of the ferries back with our return ticket, so took the one with the smiley face for a happy way to end the day. There was a chill wind back at Paihia – we’d been in the best spot for the day. Russell is a lovely place, peaceful and not over-developed. It must be different in summer, but certainly at this time of year it feels more like a busy village.

2 Responses to Rambling Round Russell