Elaine Bay Gets a 10

Meanwhile, back in April, Wyn and me and Laura are still parked up at the DoC camping reserve at Elaine Bay in Marlborough Sounds. Elaine Bay is just off the road north to French Pass and near to Tennyson Inlet. It is in the northern part of the sounds. The previous day we’d driven to see the wonder that is French Pass and we decided to have another day to sit around and enjoy Elaine Bay. It’s the sort of place that encourages that. There’s not a lot to do that doesn’t involve relaxation. It gets a bit busy when a mussel boat comes in to the wharf and unloads, and sometimes a truck rumbles through to collect the mussels. Occasionally someone launches a boat and zooms off somewhere. There is a kayak hire place – someone wheels some kayaks out of their basement. When evening comes around they put them away again. A few motorhomes and vans come to the DoC camp and the occasional day-trippers come and go – maybe curious to see what’s at the end of the road. And that’s about it for Elaine Bay. It’s not wilderness. There’s nothing there but the view of the sound and peace and quiet. It’s perfect. 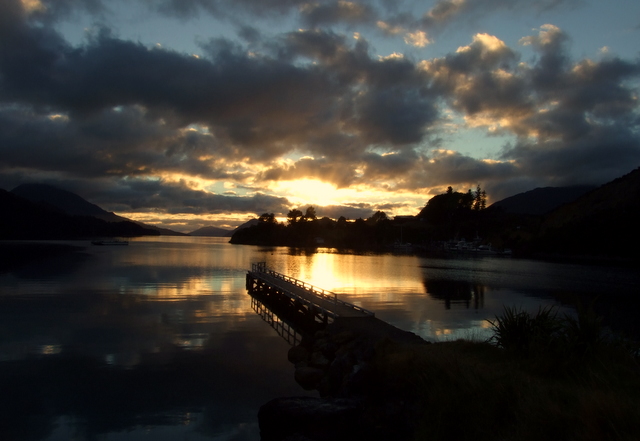 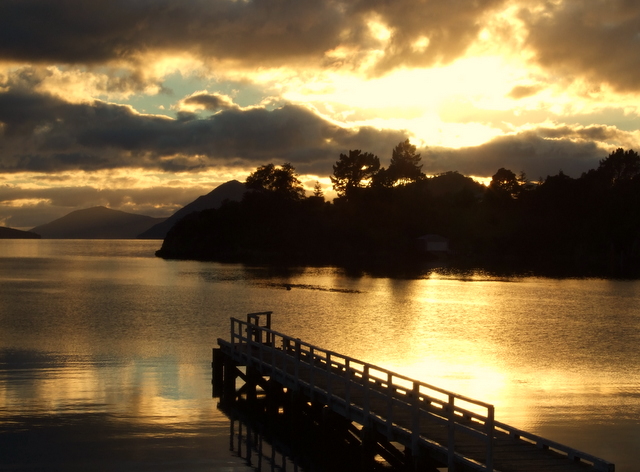 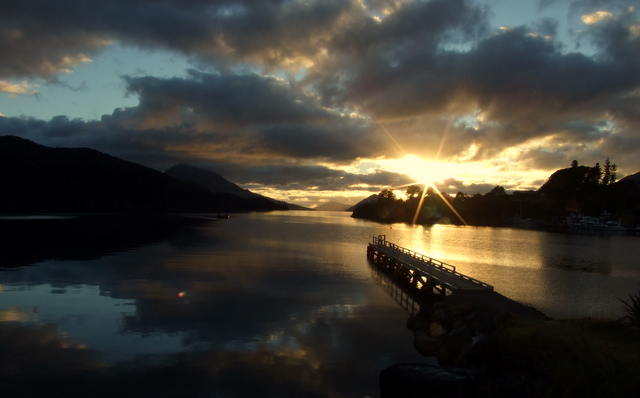 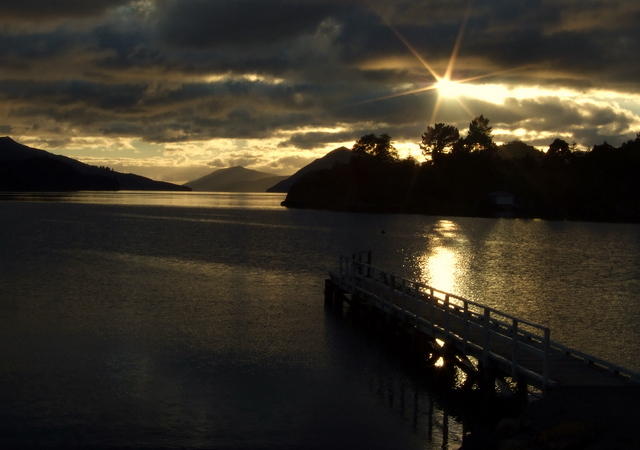 As is my habit, I was first to stir. Having missed the sunrise the previous day, I stuck my head outside at about 7am to see what was what. The sun was nearly up but was struggling to get through the clouds. It looked wonderful. I put on some warm clothes and grabbed my camera and my lightweight travel tripod and stumbled the couple of metres to the view out over the jetty and the sound. I hurriedly fitted the camera to the tripod and sorted myself out and took a couple of pictures. The lighting was amazing. I took some more. I’d been reading up my camera manual and had learned a bit about bracketing exposures so I started taking photos three at a time. The clouds had holes in them and the light kept changing. So I took some more. I love digital photography. The only limits are card capacity and battery life. Neither were an issue this morning. I was in heaven. For almost an hour the lighting kept changing, like a model that keeps changing poses and each one is interesting. Generally the idea is that light is fleeting and the best light is momentary. This went on and on, for about 30 minutes. I went on and on, for about 150 photos. I was in heaven. 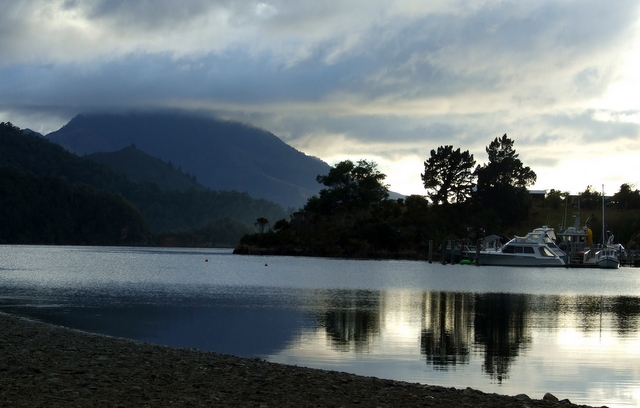 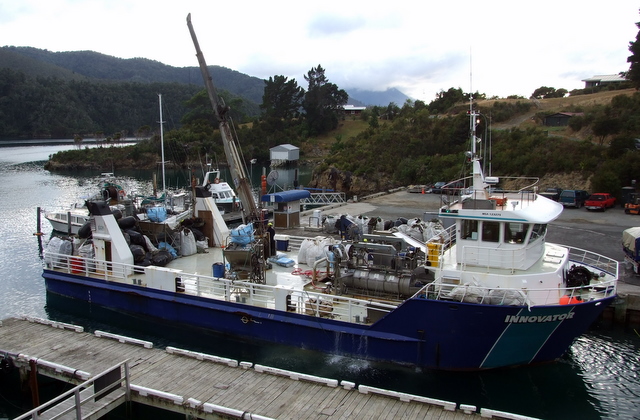 The sunrise show came to an end and still nobody else stirred in the bay. There was a lot of banging and crashing coming from the wharf around the corner and I wandered along the road to watch the unloading of a mussel boat. This is one of those time-is-money jobs by the looks. There were load of bales of mussels and cranes and trucks and men and hoses washing and then they were finished and untied and gone in a puff of diesel smoke. Silence slowly returned to Elaine Bay and still nobody else stirred. 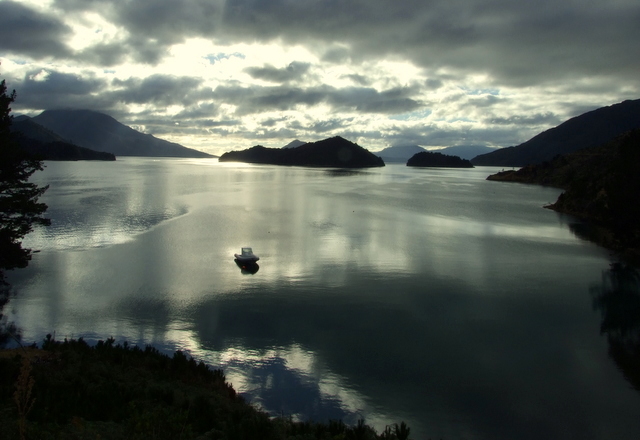 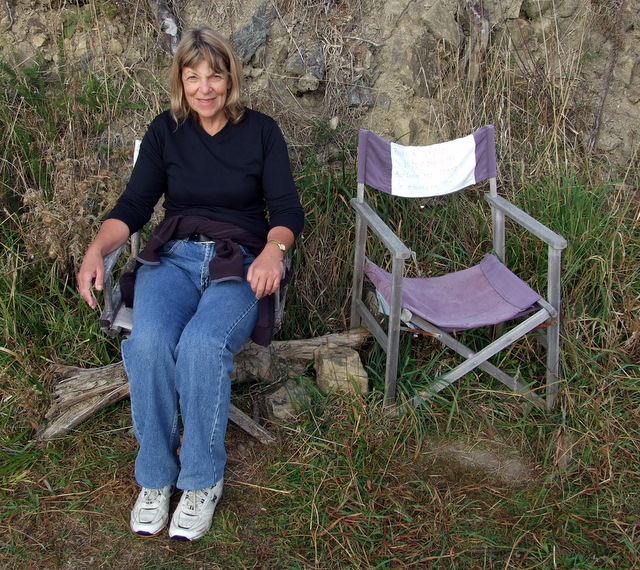 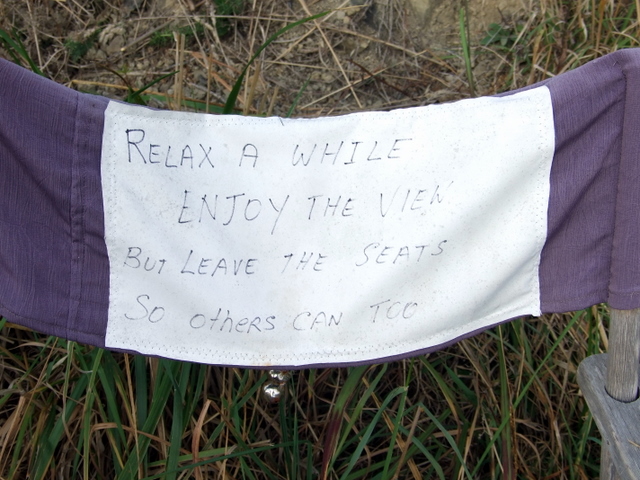 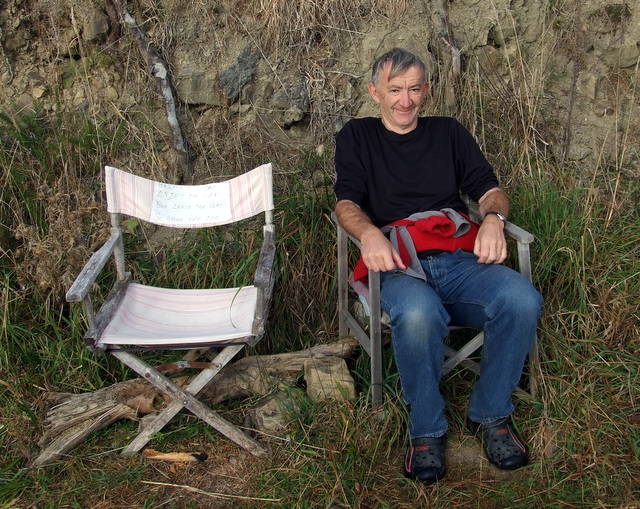 Except Wyn. I met her on the road back to the DoC camp. She was out for a bit of a walk. At least she had walking shoes on. I only had my sloppy croc things that I’d slipped on my feet when I slipped out the door. But we wouldn’t be going far – would we? I’d seen along by the wharf where a walking track headed off around the bay. It was called the Archer Track which is a very nondescript name for what turned out to be maybe the most spectacular track in the sounds. We decided on a brief explore as it was still early and still chilly and we were not geared up for going far at all. 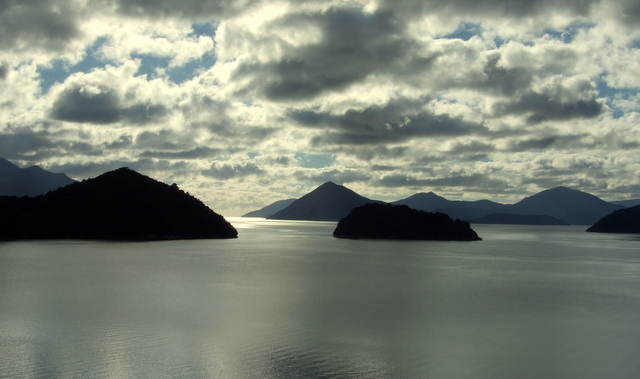 Towards the open sea - and Maud Island 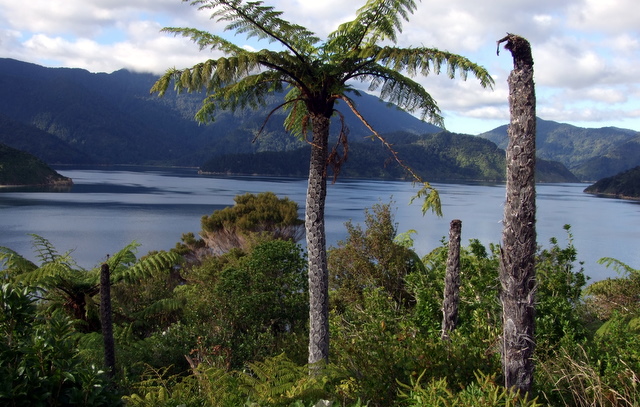 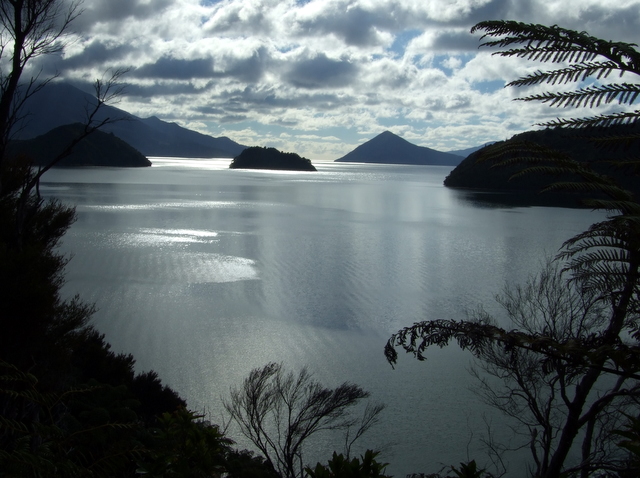 The silvery sea of the Sounds

That side of Elaine Bay has been logged recently – pine plantation removed. So the hillside was a bit barren. The track was a good one, traversing around the hillside some distance above the bay/sound/sea. The track is one that can be mountain biked, and would be very suitable for this. Although walking was good too. The morning cloud was clearing and the sun was warming up. And we came to see that the barren hillsides gave uninterrupted vistas. As we got further away from the bay we rounded a headland and turned up what we later discovered is Tennyson Inlet. The views down the sound towards the far-distant open sea were breath-taking. The morning was calm and the sea silvery – like mercury. About half an hour along the track we were surprised to come across a couple of directors chairs. They were old and weathered, and each has a message – “Relax a while, enjoy the view; But leave the seats, so others can too.” We did, we did, and we did. There is a lot to like about Elaine Bay. 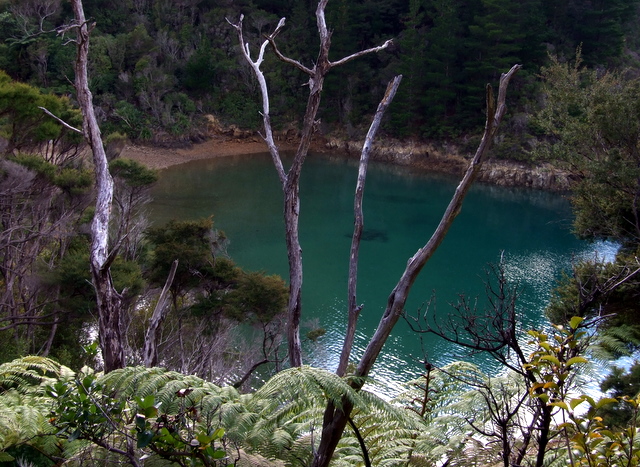 A bay on the way ... Tennyson Inlet

The track turned the corner into Tennyson Inlet and eventually entered native bush. The views were still stunning. For me one of the biggest surprises was the ruggedness of Marlborough Sounds. I think I was expecting hills like you see from the ferries. But these were more like big hills rising steeply out of the sea. It looked like a lot of Fiordland and that surprised me. These views are spectacular. Our short walk kept getting longer. A track sign had mentioned a hut (Little Deep Bay?) about an hour from the start and we decided to make that our turn-around point. What with photos and chairs it was probably an hour and a half before we got there, at almost 10am. I’d stepped outside 3 hours before to take a few photos in my slip-on shoes and we were a long way from there. Neither of us had had any breakfast and we had no water or food or anything really apart from a camera that could tell us the time and a lightweight travel tripod. We wondered what Laura might be thinking and decided it was time to head back. We had had a wonderful morning and resolved to return one day to explore further – maybe with mountain bikes. 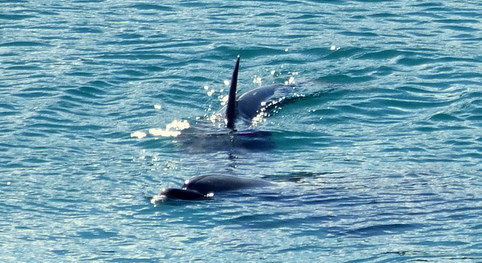 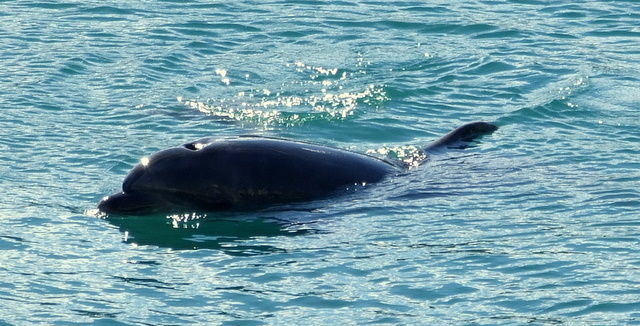 It was well after 11am by the time we got back to Laura and Suzi. We were relieved to find Laura relaxed about our absence.  And pleased to get breakfast at last. While sitting in the sun we became aware of people interested in something out in the bay. Someone had spotted a couple of dolphins swimming around. They caused a lot of interest. They were mostly over near the wharf and that was some distance away. We jumped in the car and drove over to see if we could see them. They seemed to be exploring around the moored boats. It was a mother and her baby and it was like she was showing it around. They were interested in the comings and goings of the boats and I assumed they’d head away with one of them. But they kept returning and we kept watching them for ages.  We tired of looking at them eventually and drove back to the camp. They hung around in the bay for the rest of the day and we got quite used to them. It was that sort of day.

Later in the afternoon Wyn and I walked a track on the other side of the bay. This was a more typical Marlborough Sounds walk – lovely bush and glimpses of the sounds.  It was a nice way to conclude our wonderful day. It was a day set aside for doing nothing that turned out to be special. It is interesting that I can still recall the details so easily four months later. We’ve seen lots of great places in our travels around New Zealand in the last 18 months. Lots of places that have amazed us and surprised us and that we’d like to go back to. And some places where it’s the coincidence of lots of things which come together to make them magical. This day at Elaine Bay was one of them. Out of 10, it gets a 10.

3 Responses to Elaine Bay Gets a 10