We made it to Asia. And it was warmer than Christchurch. Warmer than anything we’ve experienced for a while. We were taken out to the Christchurch Airport on Sunday evening by kind Peter. He had ice on his windscreen when he came over to pick us up at 8.30pm. It was freezing. We checked in straight away and hung around passing the time until boarding. We took a couple of old tops to keep warm which was a good idea. Boarding was before midnight and we left about 10 minutes early. 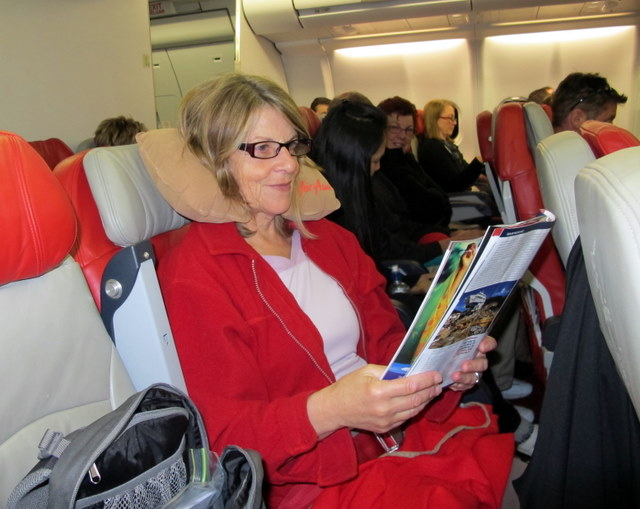 We were not best pleased to discover that our seats were middle of a row and the window seat beside it. But the woman had put us well forward so it was quiet. And then the man beside us got himself shifted to a seat with more room and so it all worked out. Having three seats for the two of us was brilliant. We took it in turns lying in a sort of foetal position and sleeping.So what was a long (11 hour) flight passed soon enough. We saw lots of lights passing over what must have been some part of Australia and later some islands somewhere.It seemed like a very long night though we were flying with the dark. Including before we left, we had about 17 hours of night.

We arrived in Kuala Lumpur just on dawn. It was already warm and humid. Our polar fleeces got dumped in a bin on the way out of the airport. We caught a bus into the city – it was about 70kms away. The bus went to the KL railway station, which is where our night train left from later that day. We were able to put our pack into a locker and go exploring for the day. Did I mention that we have only the one travel pack – so far. A man in the queue in Christchurch indicated his approval. And so far it has been a blessing.

We paid for a Hop-On-Hop-Off bus to show us around KL. We went round as far as the Petronas Towers for a start – hoping to get a (free) ticket to the viewing area. Except it was closed on Mondays. Doh! Crikey though, the towers tower over a big mother of a mall. We weren’t keen on shopping there though – it all looked expensive. Instead we caught the bus on to Chinatown for some food. And some shopping. Lots of little stalls in packed alleys. I paid too much for a pair of rip-off sunglasses but was happy. They didn’t cost more than my limit of $10 for sunglasses, and they are comfy.

We had arrived on the first day of Ramadan and so closing times were changing for all sorts of things. The bus was knocking off early so we ended up catching the LRT train back to the Sentral station. We did well with that – mastering the ticket system. After a hot and sticky day we were looking forward to showers back at the station, except they were closed early for Ramadan. And there are no comfy chairs in the station that we could find. In the end we lay down on hard floors to rest – oh for a karimat! We both managed a bit of sleep before we had to board our train north at 11pm.

It had been a long day with not much sleep. We were in the 2nd class sleeper carriage. It looked like it might have been one of the ones on my train 35 years ago. But no matter. Wyn got the bottom bunk and I the top one. We slept like sleepy things. The train rocked and it rolled and I only woke when it stopped in the middle of the night. We were bound for Butterworth on the north west coast of Malaysia. Butterworth is opposite Georgetown on Penang Island. That was where we’d wake up in the morning.