The day after our day of to Piha we did nothing more strenuous than move north. Over the big Auckland Harbour bridge and up to the top end of the North Shore. Long Bay is the location of the Long Bay Regional Park and we’re allowed to park up in their car park for a night – being self-contained in all things needing containment. The day was mostly over by the time we got there, so there was just time for a walk up to the far end of the beach and back. This is a very popular activity for many people and many dogs. It is even more popular in summer with tales of traffic jams and queues of cars waiting to get into the car park. So it’s nice to be allowed access in the quieter winter months. 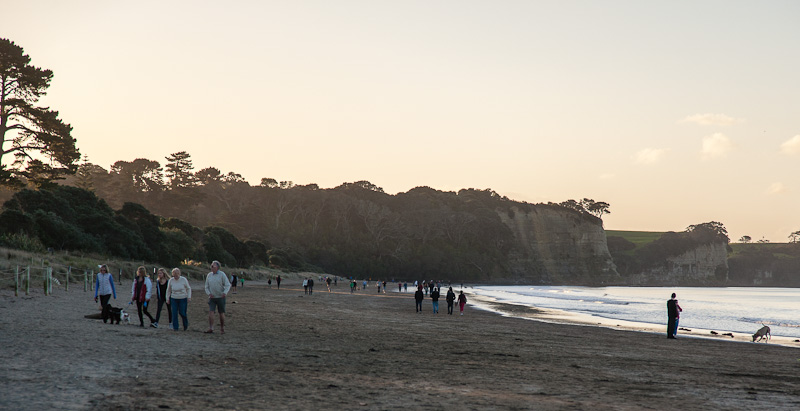 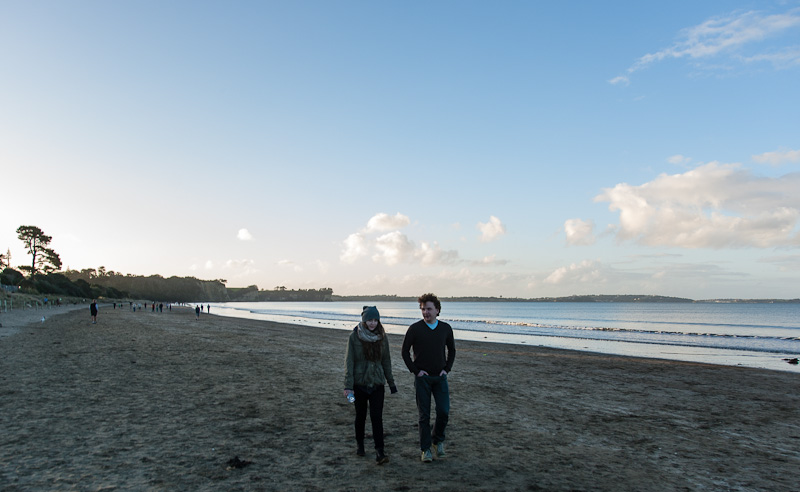 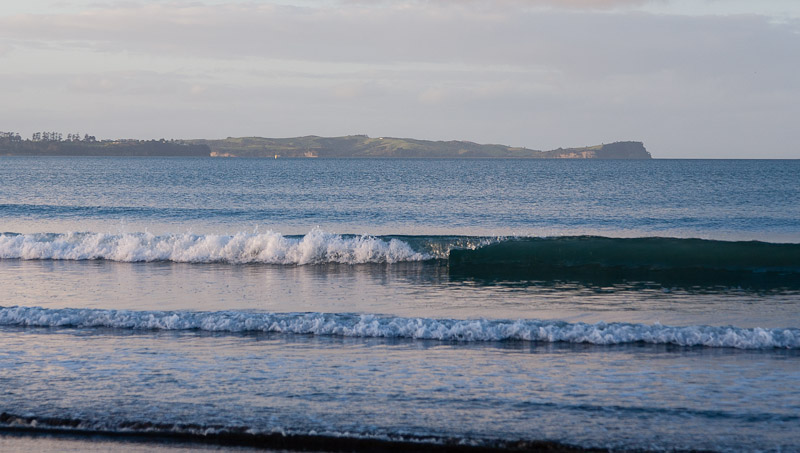 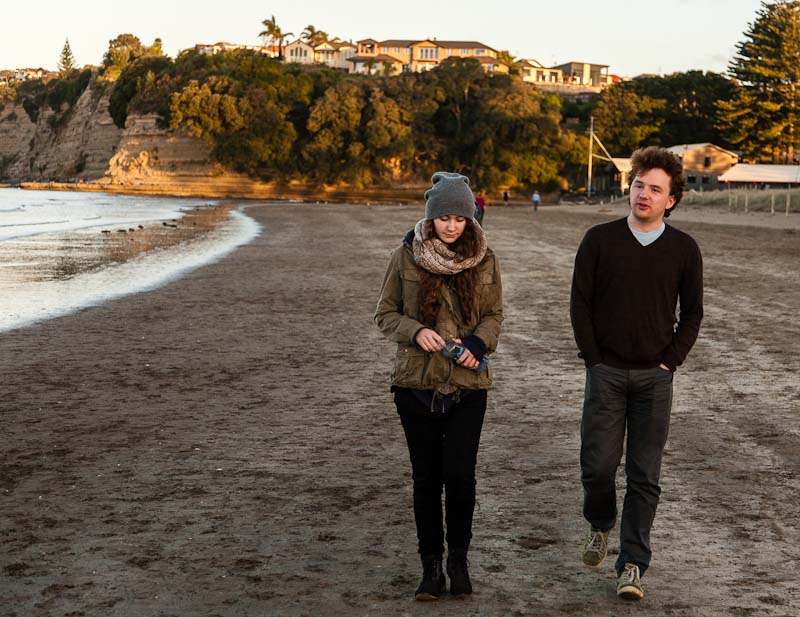 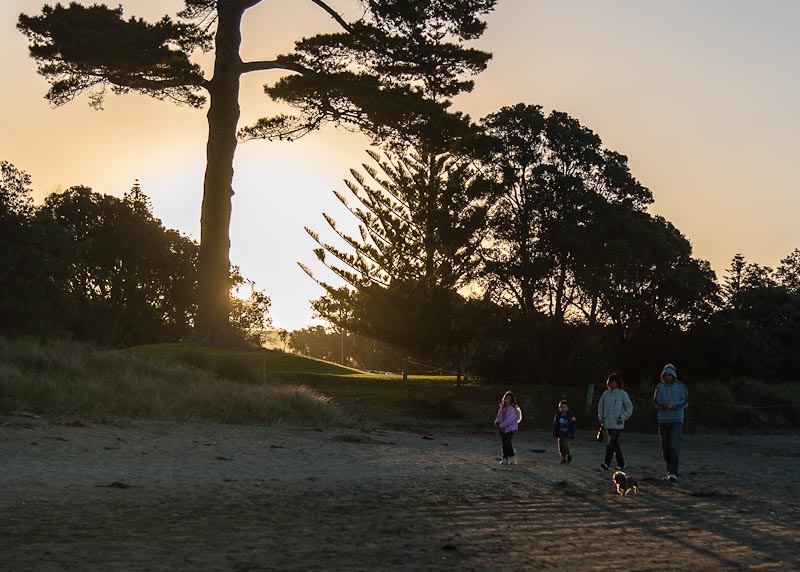 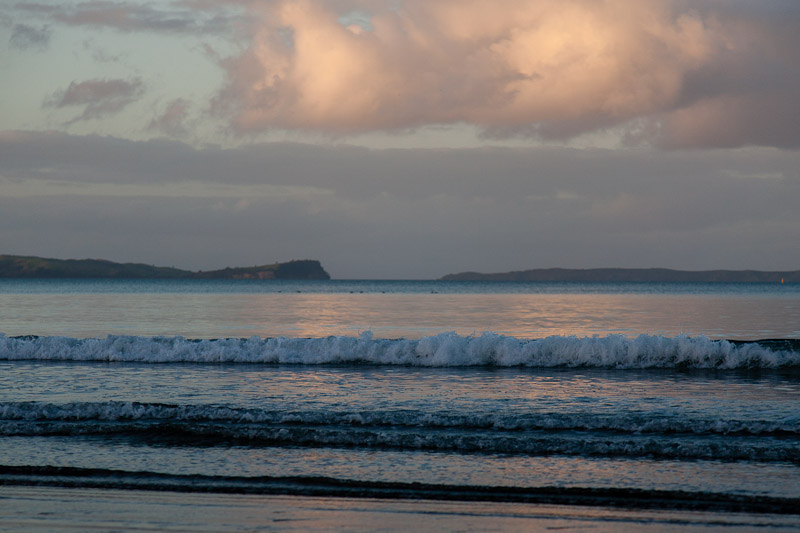 After overnight rain, the next day dawned sunny and fine. Wyn and I managed another walk along the beach after breakfast.It wasn’t as busy as the previous evening but there were still many out getting some exercise. 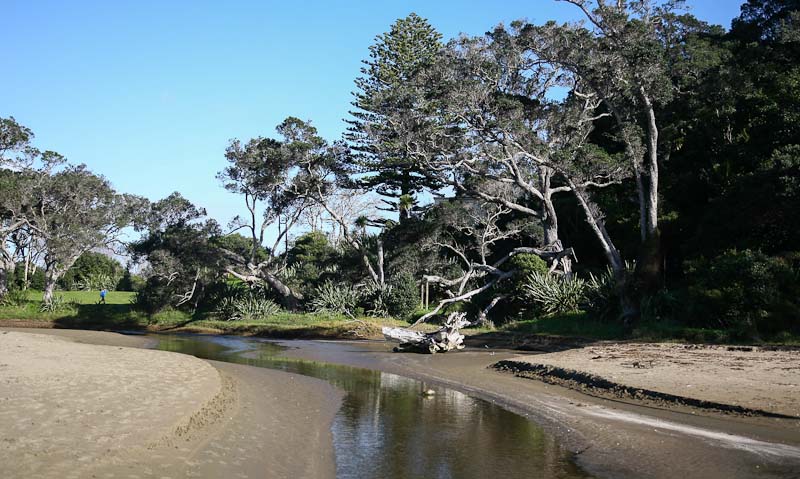 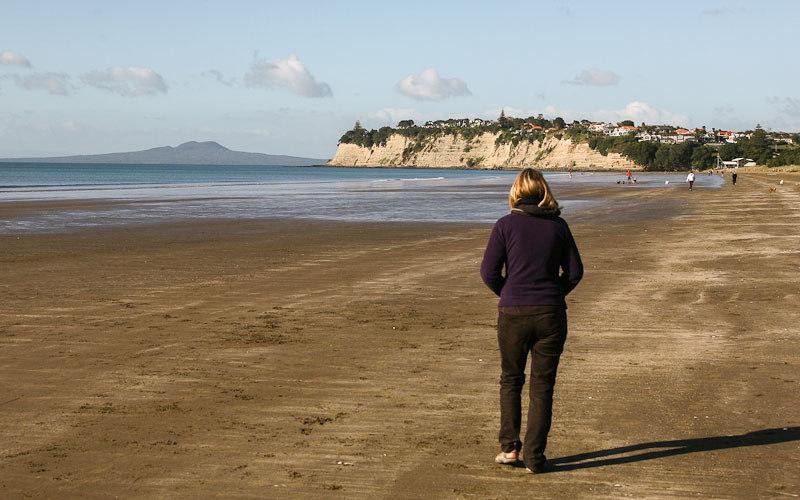 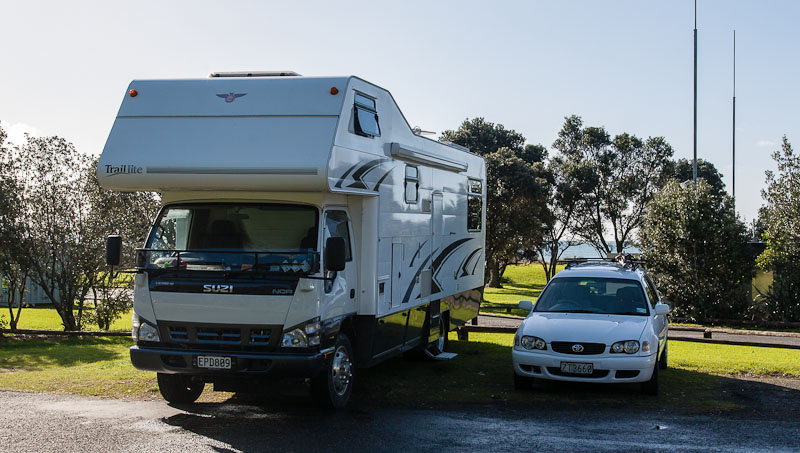 Eventually we headed off in the car to explore down the North Shore, intending to pick up the motorhome later and move on. We drove down to Takapuna for a look at the beach and then on to Devonport and up Mt Victoria. This is an other wonderful volcanic panoramic viewing platform.By this stage the day was windy and cold and changeable. The views back across the Waitemata Harbour to the Auckland CBD are extraordinary. 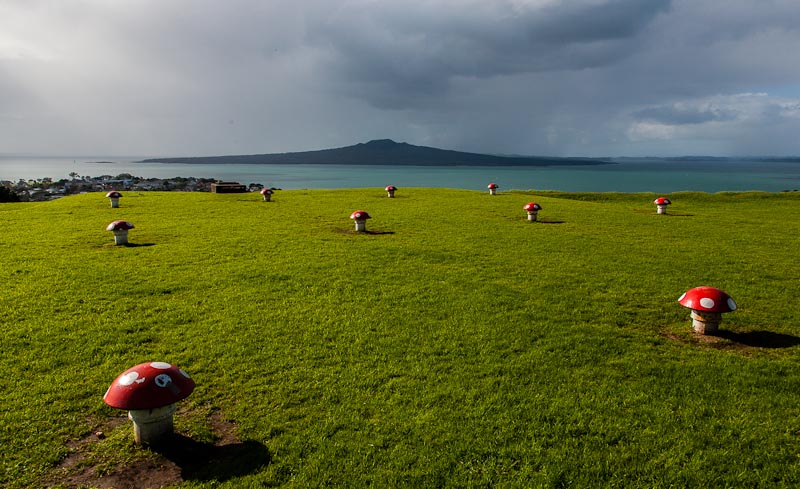 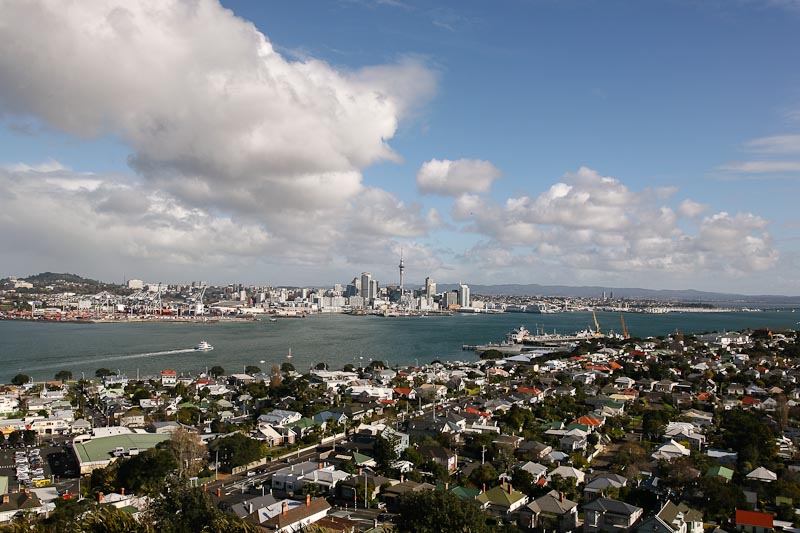 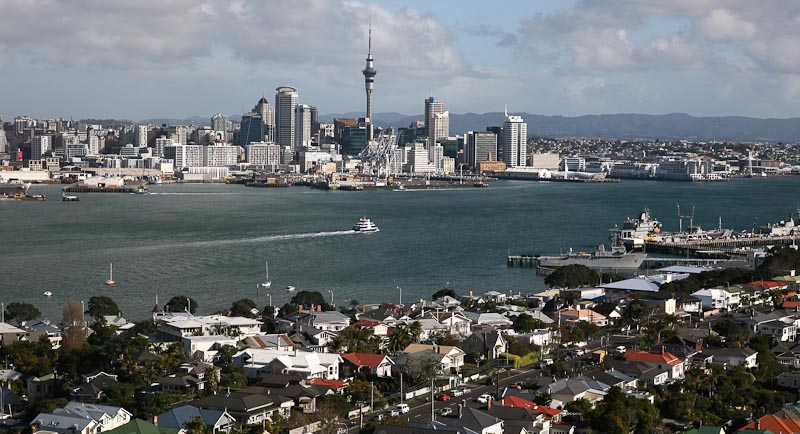 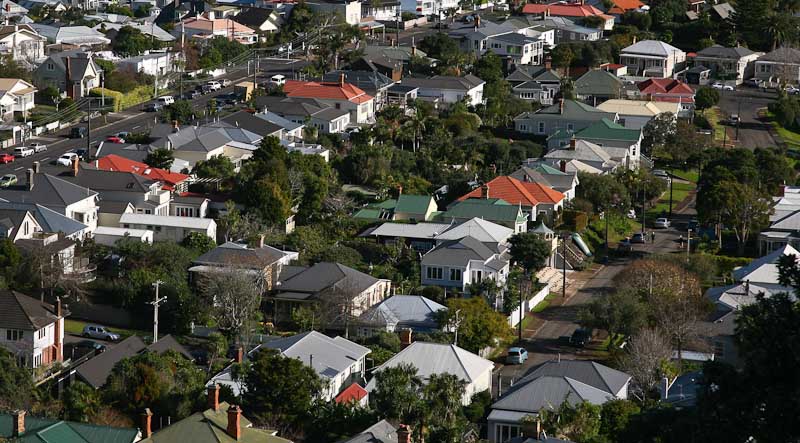 We were looking for somewhere sheltered for a picnic lunch and drove on to North Head and found Cheltenham Beach. This is a lovely wee beach with its back to the wind and its face to Rangitoto. Just the place for a picnic lunch. Slightly marred by a band of lawn-mowing weed-eating leaf-blowing maintenance men. I think we were sitting in a patch of grass they wanted to mow and blow but we were ignoring their nearby uproar so they had to retreat. Leaving us in peace to enjoy the day. 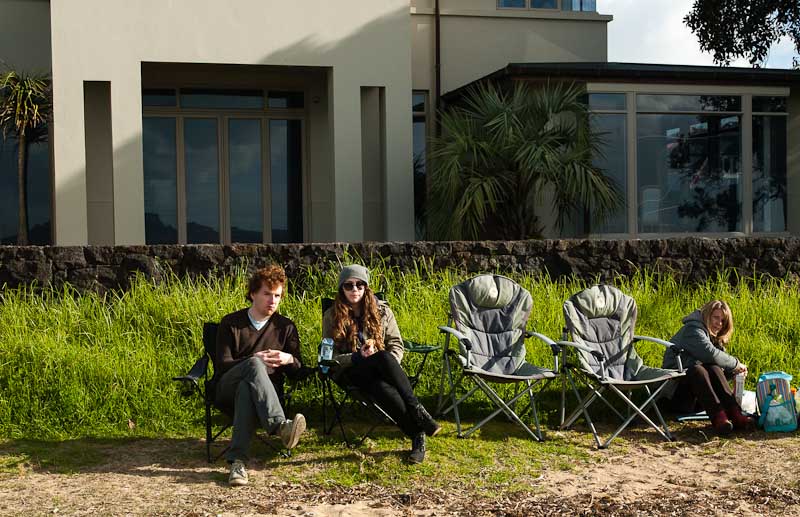 Pretending we were rich and famous at Cheltenham Beach Devonport Auckland 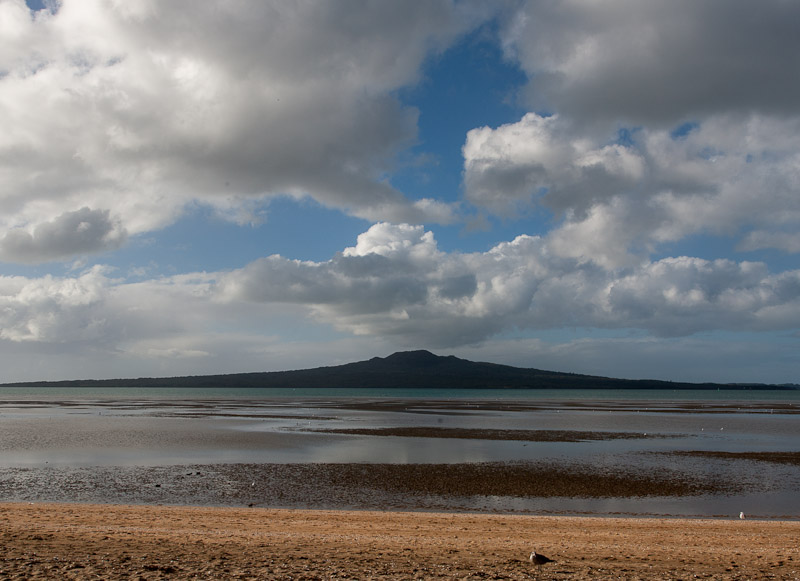 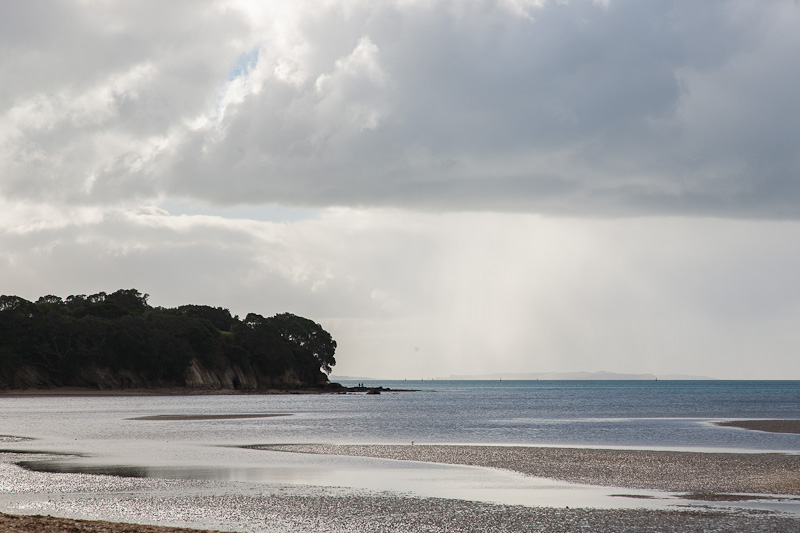 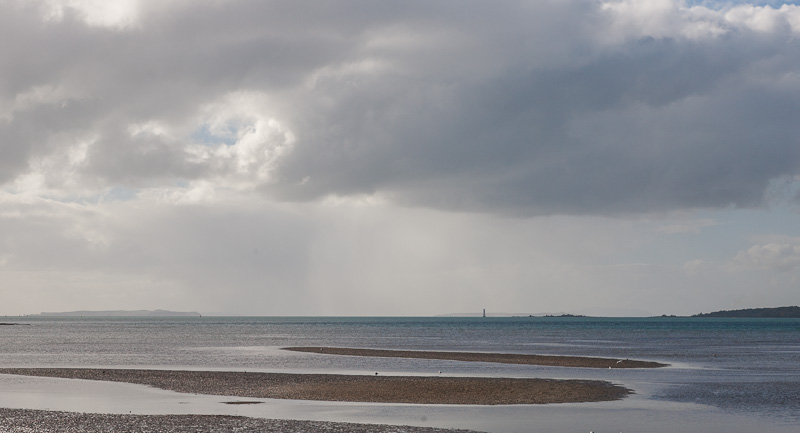 Storm out in the gulf, from Cheltenham Beach Devonport Auckland

We’d been regaling our visitors from way down south with tales of Auckland traffic and the terrors therein. After a wander around the shops of Devonport and a very nice coffee at a great cafe, we set off back to Long Bay via the motorway. I was sure it’d be a more reliable way than using the non-motorway roads. It was about 3.30pm when we joined the motorway and almost immediately we realised it wasn’t a happening thing. Soon we were down to a crawl. Stop-start in 1st gear. All three lanes. I put it down to normal bad Auckland traffic. But had to think that even Aucklanders wouldn’t put up with this every day.

It turned out that the north-bound lanes had been blocked for over 12 hours already at that stage. Someone on the run from Police had been shot dead early that morning under one of the overpasses. So the entire north-bound traffic was being detoured off on the off-ramp, across the road using the overpass, and then back on via the on-ramp. All day. Which would have worked badly for the whole day. Until the afternoon exit from the city when it didn’t work much at all.

Just as we reached the closed section of motorway things suddenly started to move. We reached 2nd gear, then 3rd. In no time we were zooming under the overpass and there was clear road in front. They’d reopened it just before we reached the spot. We turned on the radio and started to hear the news of home invasion in Opotiki ending in armed confrontation on the Auckland northern motorway. We were so late back to Long Bay that we asked to stay an extra night and were relieved when we were allowed.

The next morning was another lovely one and Wyn and I made the most of it with another walk along the beach. To the far end and back like everyone else. I can see why the locals don’t get sick of it. 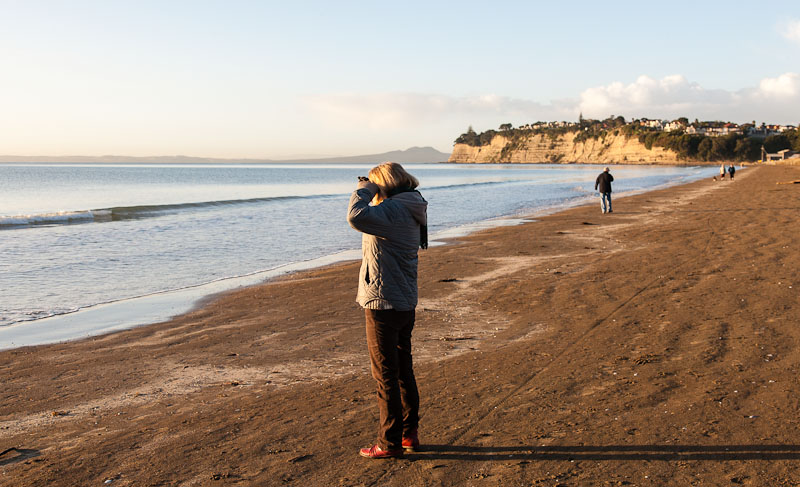 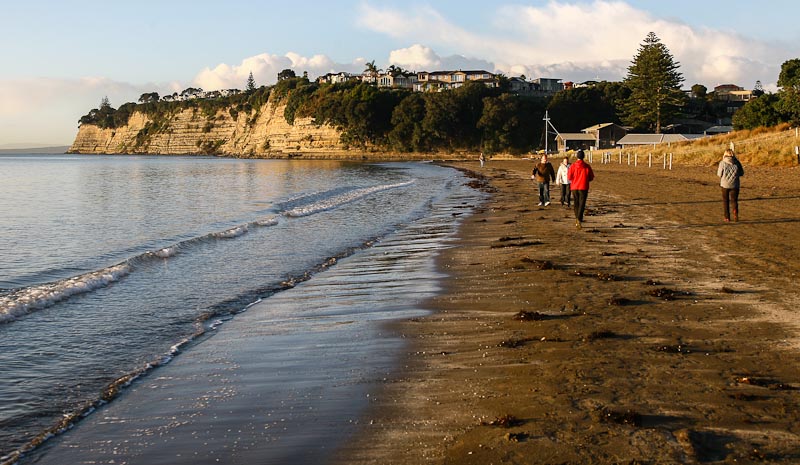 Soon enough we headed out. Back onto the motorway south heading for Mangere Bridge and Ambury Farm Park again. Via Sylvia Park, an enormous shopping mall. Which seemed like two large shopping malls joined together. With a motorhome out in the carpark, we could retreat when the shopping overwhelmed us. And then refreshed, return to the fray. Soon enough we’d all had enough so we headed back to the motorway and on south and west to Ambury Farm Park.