Photo of the Day #21 – Rockclimbing Day at Long Beach

The rockclimbing place near Dunedin in the 1970s was Long Beach. That’s where the Mighty Mini (Photo of the Day #20) was seen. Beside the rock that we climbed all over. This photo was taken one busy day in the early 1970s. By the looks it would have been an organised Otago Tramping and Mountaineering Club outing. It may have even been the same day the Mini visited.

I hated the rock. Dreaded it. Well I sort of hated any rockclimbing. Feared it. I wasn’t any good, for multiple reasons. I was scared of falling. I had no arm strength – couldn’t ever manage one single pull-up. My knees would shake – the old sewing-machine knees. Whenever I was climbing, I’d look down at people sitting in the sun on the beach and wonder why I wasn’t sitting in the sun on the beach. Even once you had climbed to the top, you still had to climb back down again. You couldn’t relax. You could climb down without a rope and everyone did but I always wished it was a lot easier. 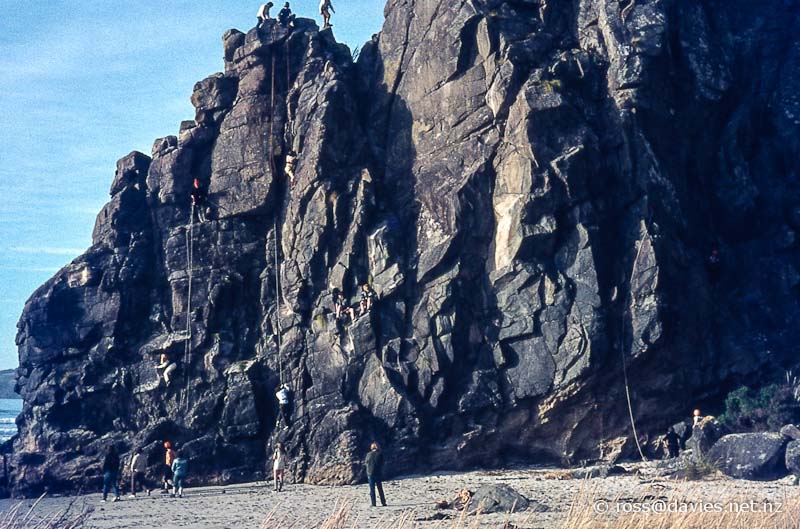 It’s hard to identify people in the picture. I reckon that’s Ellen Dick about 3 metres above the beach with her right leg out to the left of her left leg. And Eugenie Ombler on the beach in the blue jersey. Any help with identification is welcome. I do like the casual look of the two lads sitting in the sun about 8 metres up the middle gully.

Long Beach was a place where boys became men. I didn’t.

This entry was posted in Photo of the Day, Tramping and Climbing in 1970s and tagged Long Beach, Otago, rockclimbing, Tramping & Mountaineering. Bookmark the permalink.