Q. What do you call a photographer without a camera?

A. Nobody calls a photographer without a camera…

We still had a bit more exploring to do on this side of Kenepuru Sound while we were staying at Ohauparuparu Bay. After our big day before to Raetihi and Crail Bay, we had a leisurely start to this day, including watching a herd of cattle being moved along the road. We didn’t think much more of the cattle until we headed back west in the car. The road was a mess of cattleshit, first on the sealed part and then onto the unsealed rest. Some bits we could dodge and some we couldn’t. The stuff isn’t like dirt and mud. This stuff sticks and dries/bakes on. So I knew I was in for a cleaning job when we got back.

We headed back to Waitaria Bay and then took the side road north; up the short valley and then up and over the saddle to Clova Bay. The weather was cloudy and we weren’t tempted to stop at the bay. It was at about this stage that I realised I’d forgotten my camera. It was an unusual feeling. It’s not like I’m joined to my camera at my hip or eyebrow or anything. But I’ve gotten very used to having one nearby. It’s a bit sad really. What was I supposed to do if I came across a scene I wanted to “capture”? Am I suppose to remember it? Or just enjoy the moment and move on? Before I got myself too anxious, I worked out I had a sort-of camera on my phone and then I worked out Wyn had a significantly better camera on her phone. I took some deep breaths and calmed down and carried on.

We followed the road around the bay to the end at Waimaru Bay where this is a DoC camp. The camp is some way back from the beach but it’s in a lovely little glade of old trees. It was time for another of our late lunches with the MSR stove to boil the billy again. Plus there was a fireplace so I had fun playing Manly Jack getting a fire going. 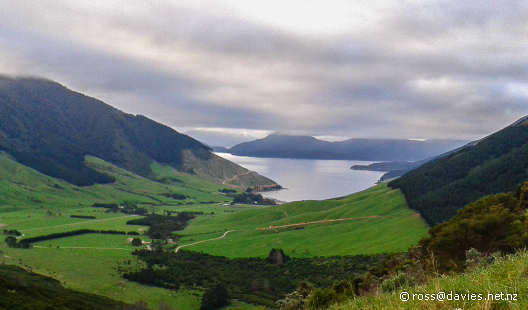 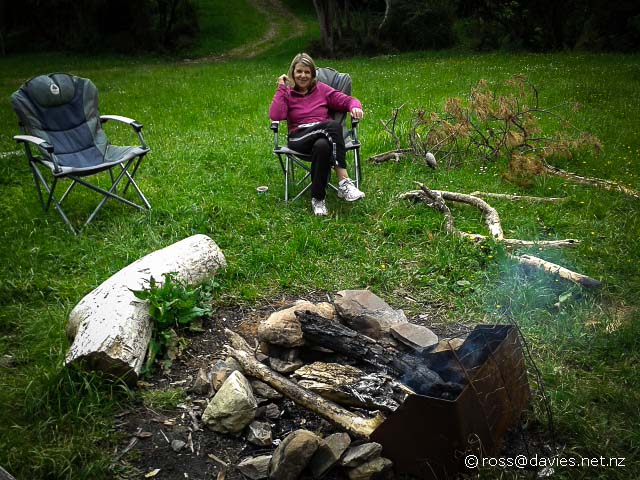 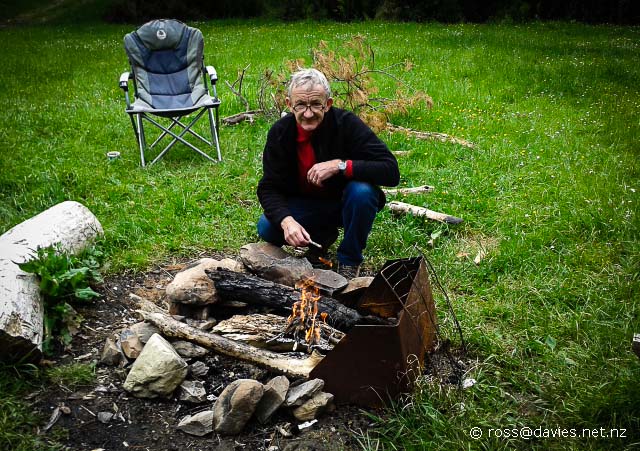 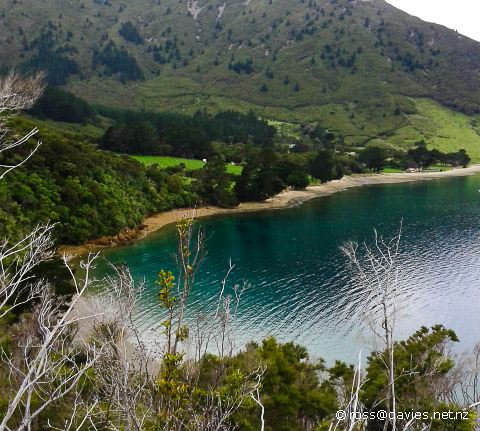 The day was getting on and we decided a short walk would be a good idea before we headed back. This became one of our longer short walks as we headed north trying to get a view around the ridges. Eventually after an hour we were overlooking Te Puraka Point and could see north across Beatrix Bay and over to the Tawhitinui Reach of Pelorous Sound. 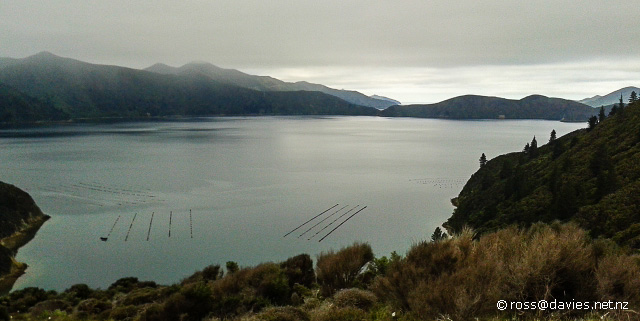 Tawhitinui Reach of Pelorous Sound in centre, Beatrix Bay on right, Marlborough Sounds. (Click on the photo to view as a wider panorama.)

We’d forgotten the map and had a difficult job working out what was bay and what was sound. You can only admire Lieutenant Chetwode who explored the whole length of Pelorous Sound in 10 days back in 1838. Our day was coming to an end so at 5.45pm we headed back to the car and then back around Clova Bay and over the saddle to Waitaria Bay and Kenepuru Sound, and finally back to Suzi motorhome at Ohauparuparu Bay. (And a smelly job getting the cattle muck off the lower parts of the car!) 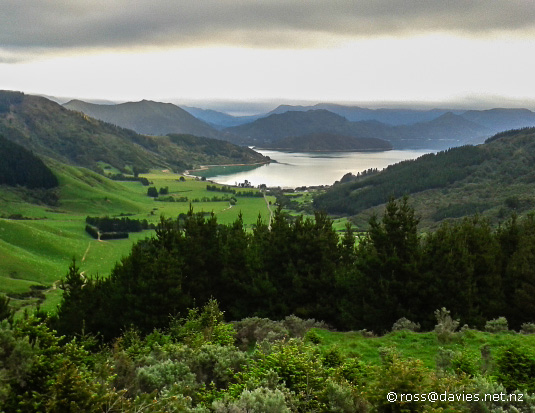