The day after our cycling expedition we went in search of some mountain temples to the north of Sideng village in Shaxi. As with most of our outings in China, we didn’t know much about it before we started; most tourist destinations are not geared up to provide helpful information to FIT’s (Free Independent Travelers) like us. It was only after we’d visited places that we had much idea of what was where.

Cato’s Inn organised transport, a little van just for us. The driver would drop us off at the entrance to something and we’d wander off to see what it was. There might be information boards with diagrams which we’d photograph to use as a guide as we went. Any maps were somewhat stylised and cryptic. But when we got back we could usually see what they were trying to tell us. 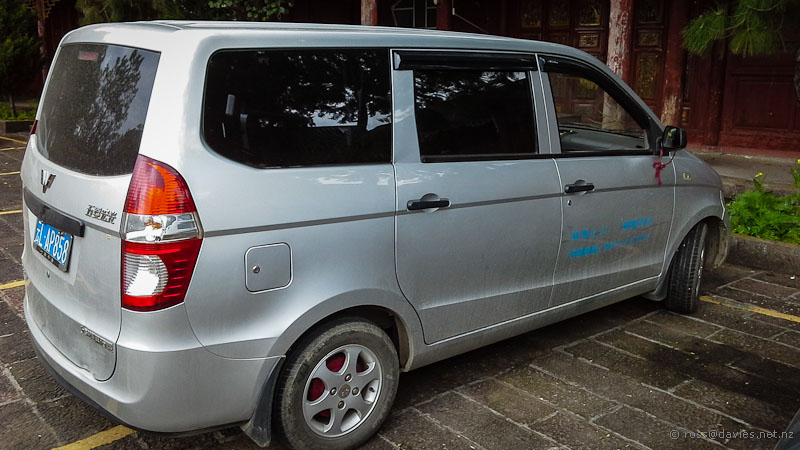 Also fun were lots of the signs. Many lost quite a lot in the translation. We appreciated the effort and it was a good game trying to work out what some of them meant.

Information board at temple Shiboa Mountain

The first temple was a nice temple. There’s a lot to like about Chinese temples. 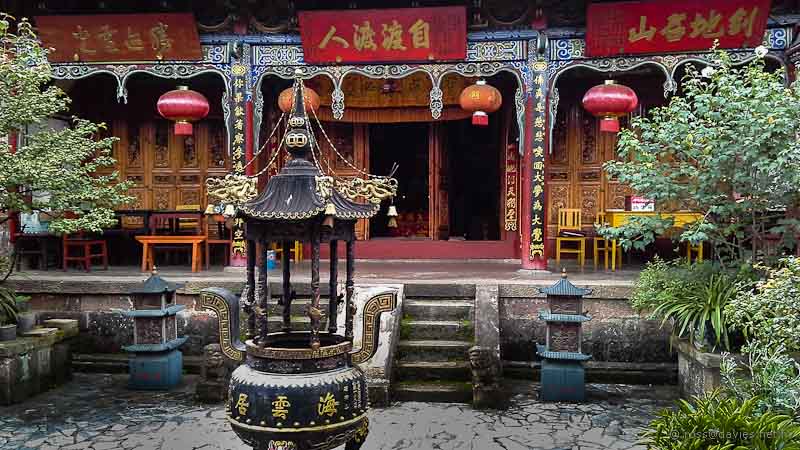 I liked the wall panels. 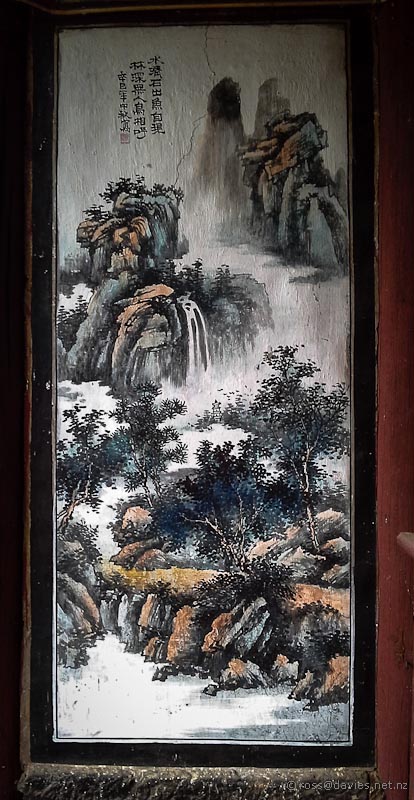 The second place we stopped had a gang on monkeys sitting in the middle of the road. And another bunch hanging out on a giant waterwheel. 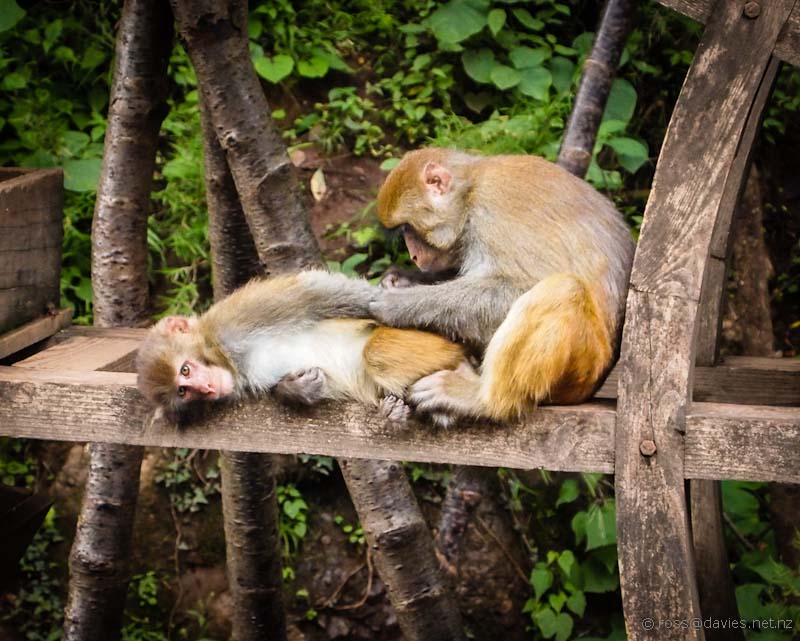 The second temple was more of a complex. We had a climb up a zillion steps to come out on the scene below. Much of it was built into the cliff. Maybe it was a defensive position. Like no bad people could sneek up behind them. 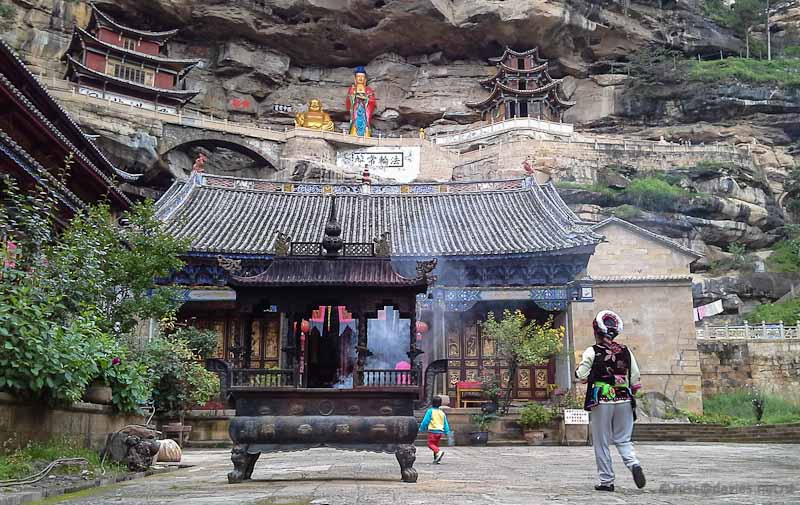 The statue things there would double as works of art. In an extraordinary outdoor gallery. 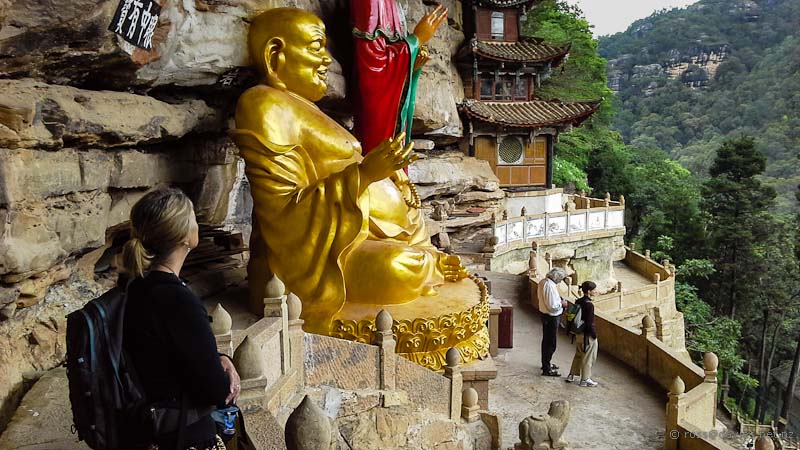 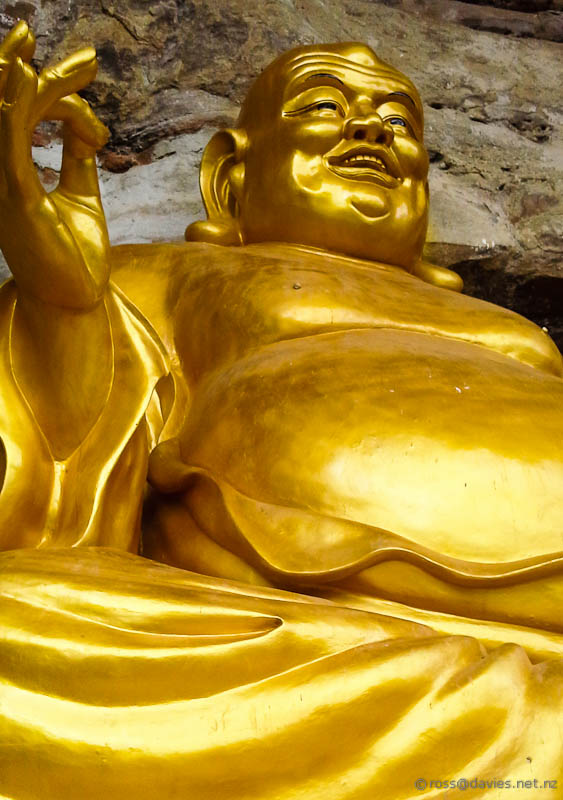 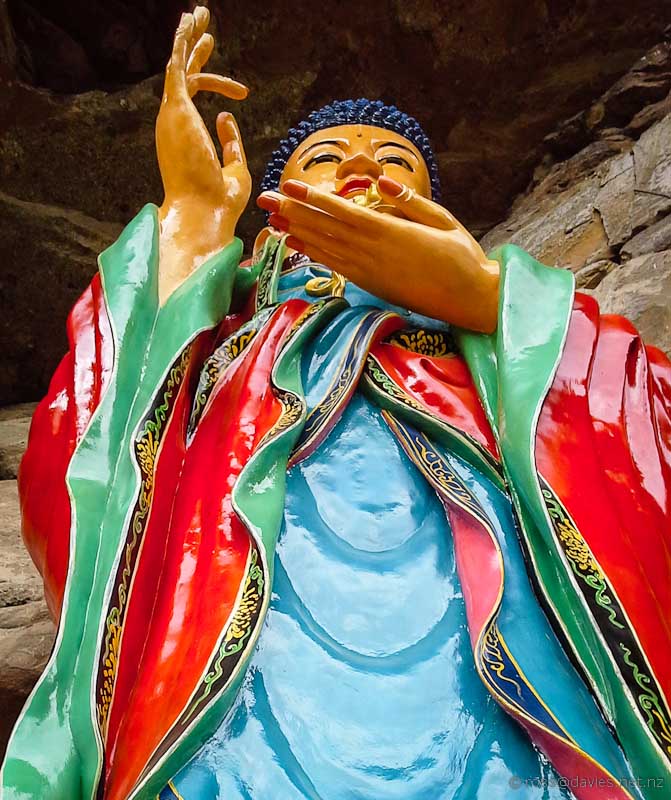 It was all a crazy path sort of place, all hacked out of or stuck onto the cliff. Wonderful! 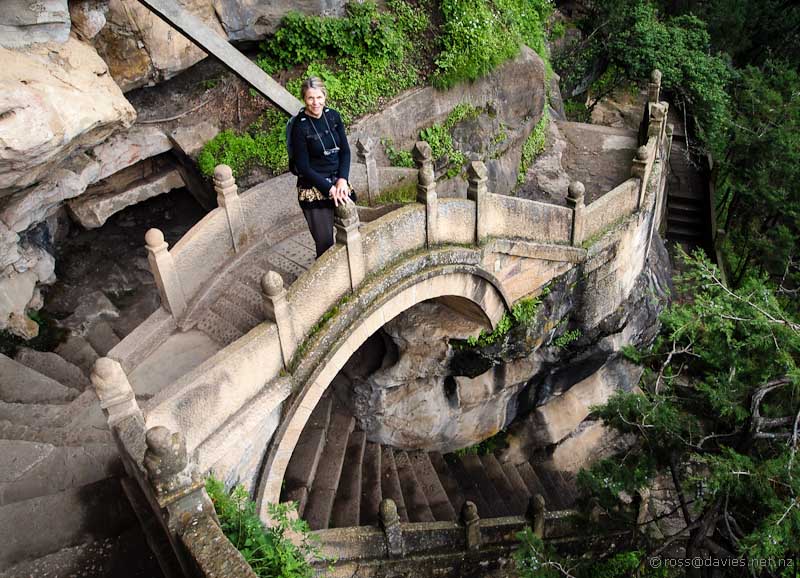 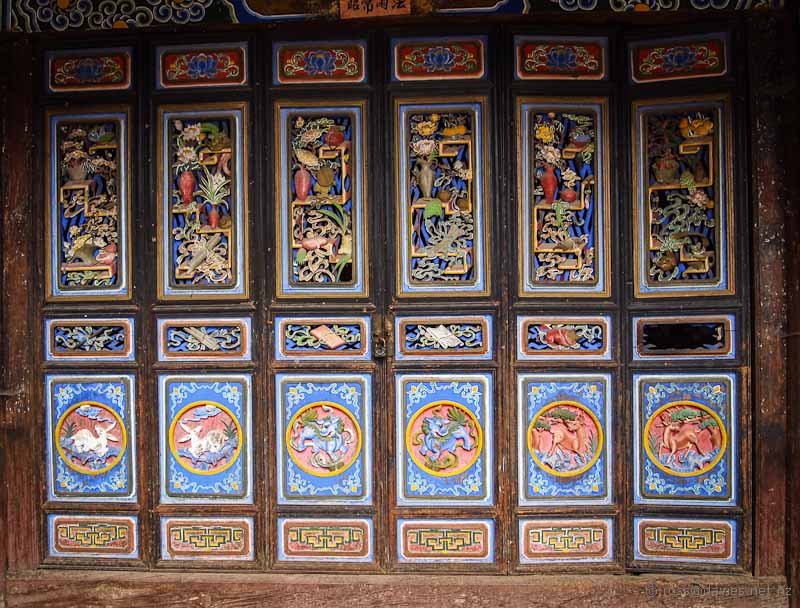 The door panels above and below helped to fuel my fascination with door decorations. They make our doors look very plain. 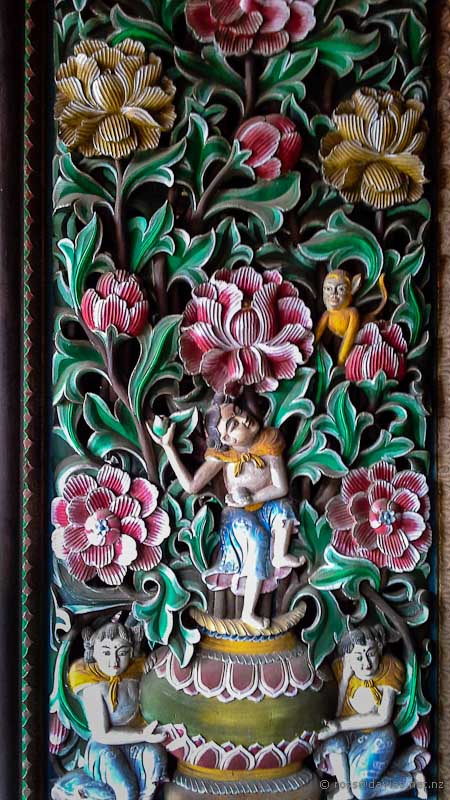 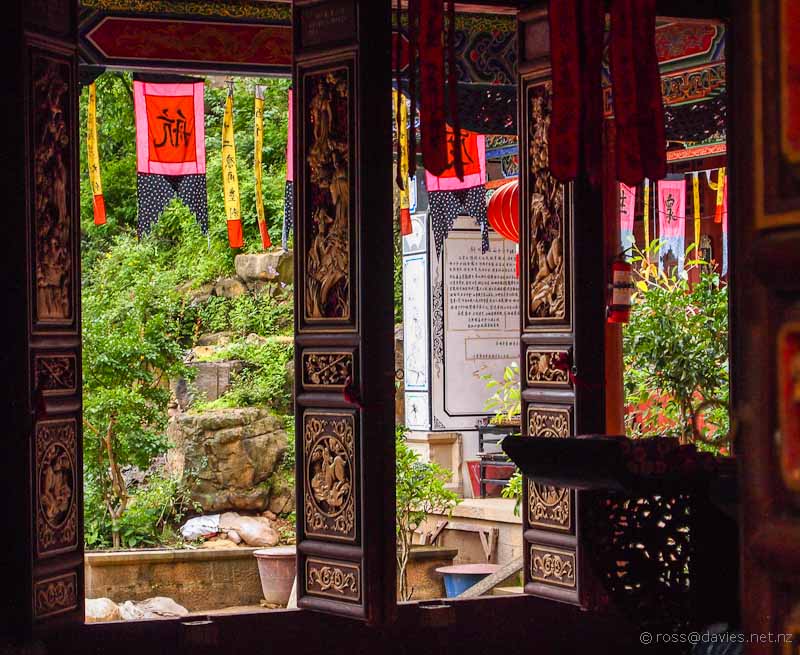 And then there were the long-term temple inhabitants. 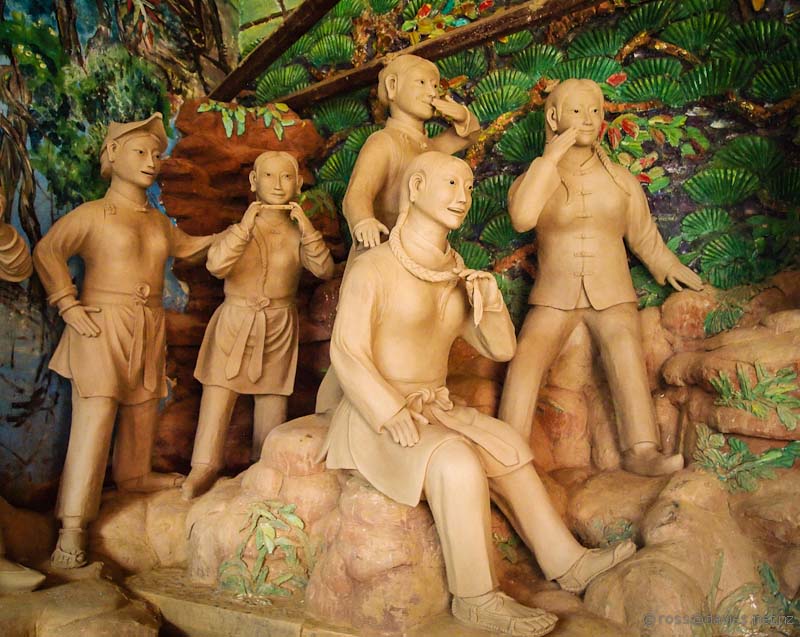 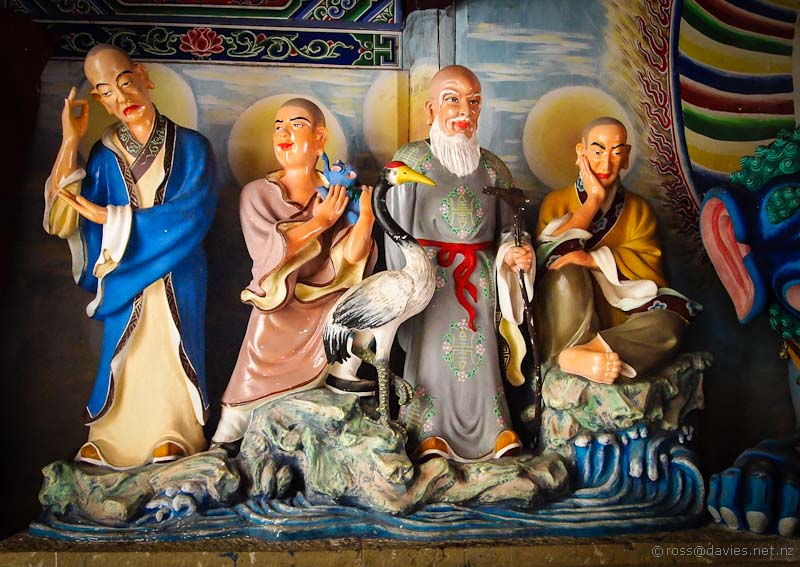 I wondered if the guys above were the Four Wise Men? And with the collection below, I just wondered. 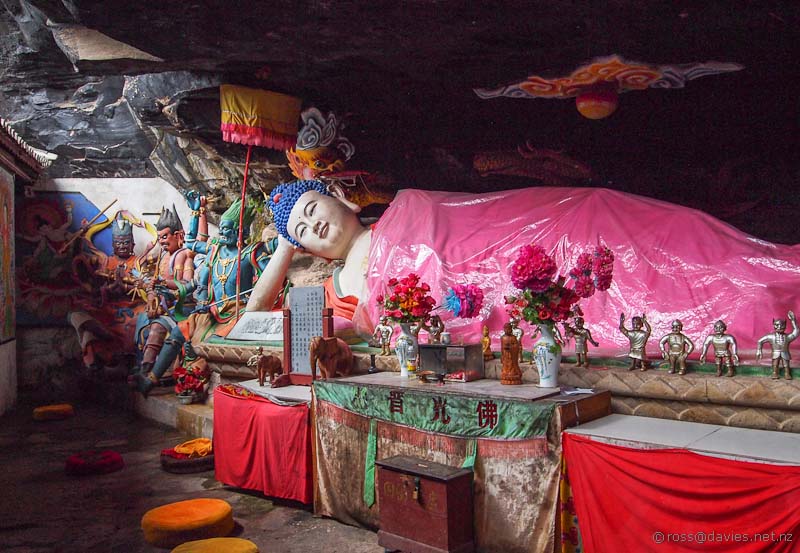 We drove on to another temple group, high on a ridge. There was some very old relics in some of the temples, with strict rules about no photographs.

From there we descended into a valley and climbed the other side. Up some very steep steps and climbs which would give OSH people nightmares. 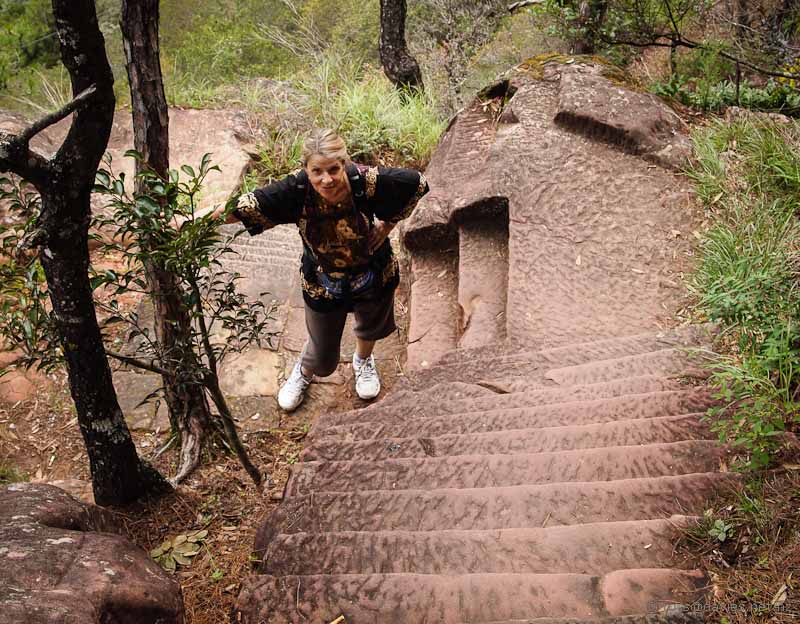 We found our way back to where we started and it had a great view back down the valley to Sideng village. And that was it for our day. Our nice driver drove us back without any drama on uncrowded roads to our our lovely laid-back village. Perhaps the biggest worry was the huge carpark under construction at the entrance to the temple area. There is obviously a big increase in vehicles expected. And we thought probably not little mini buses. More like bigger tour ones. And so it begins …

Shaxi from Shibao Mountain. Sideng village is the group farthest down the valley to the right.