The Interesting Surprises of Travel – Jianchuan

Some of the best things about travel are surprises. Some days are unknowns, especially for we who organise ourselves. Some days are travel days, getting from somewhere to somewhere else; maybe with transfers and changes along the way. Our day getting from Sideng village in Shaxi to Lijiang further north was all of these things. Lijiang is one of the major tourist destinations in Yunnan province.  We just wanted to get there and with no travel booked we were a bit anxious about it all.

We walked the short distance from our lovely guest house Cato’s Inn to where the minibuses come and go. They only go to one place, Jianchuan over the hills to the north; about 40-50 minutes. We stood around waiting and noticed a few more turning up looking like they were waiting as well. So when a likely vehicle pulled up we made sure we were in the front of the queue/scrum. There were only a limited number of buses onwards from Jianchuan and we needed to be on one.

Eventually our tiny bus/van pulled out and we had seats and lots of fellow travellers. We were surprised when the van stopped and picked up one more. He got a 200mm-high stool in the back/boot to sit on, just behind us. Almost immediately he lit up his cigarette. Despite all we’d read and heard and feared about smokers in China, this was one of the very few occasions we encountered smoking at close range in public places. He probably thought me inconsiderate when I opened the window. Eventually he needed both hands for hanging on when we went over the hill so smoking became impractical anyway.

As soon as we arrived at the  bus station in Jianchuan we zoomed in hoping to get a ticket on the next bus at 1.30pm – perhaps the second last for the day. We established that that was impossible and had to settle for the next (and last?)  at 3.30pm. This meant a wait of almost three hours but at least we had tickets – which proved to be virtually the last couple of seats on that bus.

While we were standing there contemplating what to do next a Belgium couple came up to us to check on our success with tickets. They were surprised to have to wait for so long and not sure what to do for the next three hours. Jianchuan is the sort of town you pass through and can’t wait to get out of. It doesn’t rate any mention in any tourist guides other than as somewhere you pass through. Luckily the hosts we had left had made some mention of an older shopping street and a temple. And our map showed a temple a couple of blocks to the north west. The Belgians were happy to join us and we put all our luggage in the left luggage office and headed off in search of something or anything.

Soon enough we found a lovely little area with pedestrian shopping streets. It was relaxed and uncrowded and nice and normal and local and friendly. 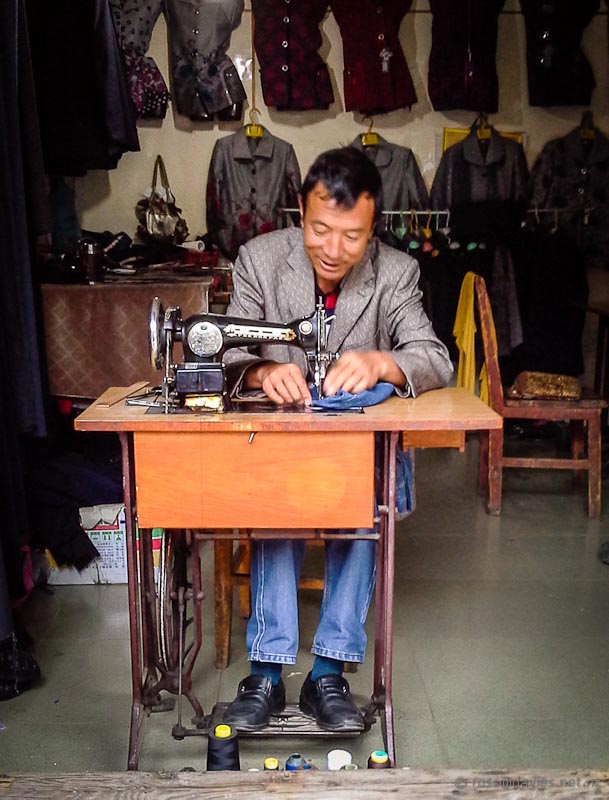 I was too busy looking at the shops to notice that the buildings were all on a big lean. 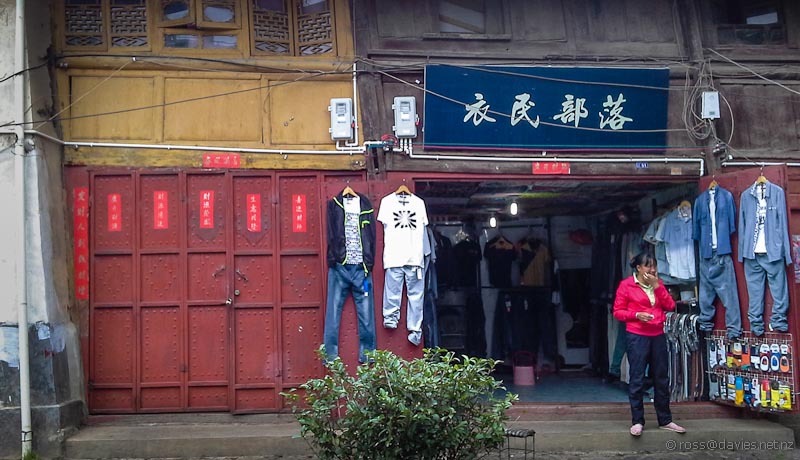 There was a lot of construction, of older style shops. These ones won’t be on a lean and won’t actually be old. 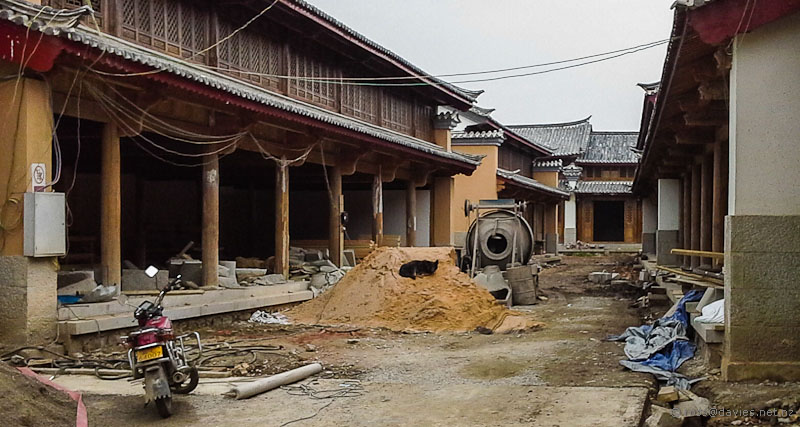 The temple was closed but we weren’t disappointed – that was just a destination. The point was to fill in the time. And we did this pleasurably, chatting with our new companions and eating our respective lunches.

Hanging out on a Jianchuan street

Across the square was a billboard which appeared to foretell of a massive hotel complex, presumably at that location. Now that will change the character of the town! 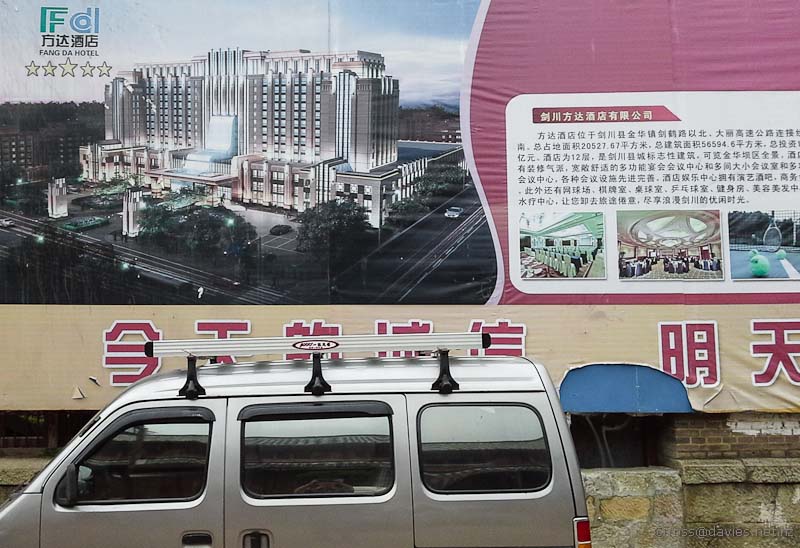 As we ambled back towards the bus station the leaning nature of the shops dawned on us. Not just individual shops but the whole block. There was no obvious concern. I guess so long as you keep on adjusting your doors then you can carry on. 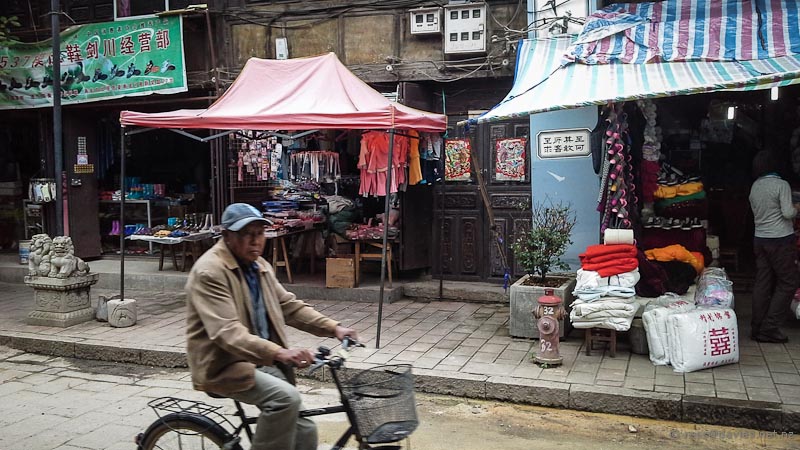 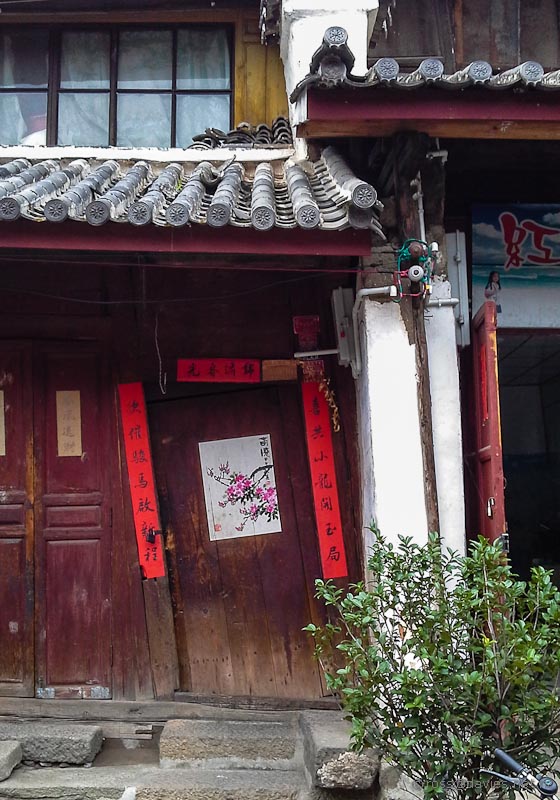 We eventually made it back to the bus station and found our bus. It was a typical inter-city bus, small and modern-ish. Our route soon had us back on the motorway with wide open uncrowded roads. Our bus turned out to be sluggish and struggled to pull 70 kmph. Eventually we all worked out there was a lot of fumes entering the bus. The other couple thought they’d seen the driver almost dozing off, which was hardly surprising. It was a wonder the whole busload didn’t doze off; permanently. 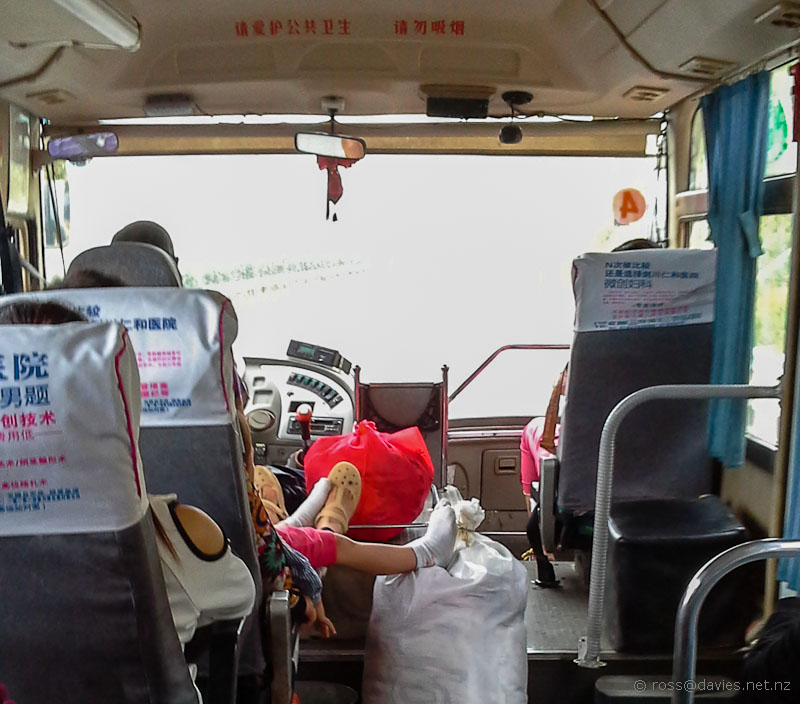 Finally we reached the Lijiang bus station and farewelled our Belgian companions. We set off to get a taxi driver who could understand our instructions for finding our guesthouse. A day we had been contemplating as lost to tedious travel turned out to be interesting and enjoyable – a nice surprise.

1 Response to The Interesting Surprises of Travel – Jianchuan