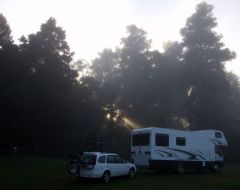 Thursday 19 March
Dawn after overnight rain in Taumaranui was warm and misty, with the sun eventually breaking through the trees we were beside. The route to Katikati was a real jumble of highways, so I tried to programme Nev the Nav with some waypoints to make sure we were on the same wavelength. We started at 9.30am on SH4, soon were on SH41, before turning onto SH32 [that’s a total of SHs of SH77 and all in the first hour!] to go up the west side of Lake Taupo – not that we saw it much. Traffic was light, apart from a few trucks – some driven with a bit less care than we liked. Soon we were on to Tokoroa and the truckstop for fuel. Here we got stuck behind someone filling a 1000 litre tank on a trailer, with a slow-speed hose. Well actually it was a 2000 litre tank, but luckily he was only allowed to spend $1000 on fuel. Then he ambled in to pay (this was a truck lane in a service station) and queued for coffee and an ample lunch.
Eventually we got away, on SH1, before turning onto SH28. We stopped at a lovely rest area by a stream for lunch. Back on the road, we changed to SH29 to climb over the Kaimais to Tauranga. It is a big climb, but is well roaded with passing lanes most of the way. We kind of bypassed Tauranga to take SH2 to Katikati. That was our 7th state highway for the day. Nev coped with it all quite well except for when we bypassed Tirau – then he was quite desperate for us to U-turn or somehow get back. It took a bit to change his mind but somehow we refocused him.
At Katikati we checked in to the packhouse where we will be working, and sorted out our spot out the back with the other motorhomers. It is a great set-up, room to park, and a bit of an outlook. There were lots already in residence, with more to come. The news was that work wouldn’t start until Tuesday, although there was an induction/orientation at 9am on the Monday. The weather forecast was good for the weekend, and we hatched a plan to get away before we started – to explore up the Coromandel.

This entry was posted in Motorhome General. Bookmark the permalink.