Wednesday 18 March
We woke this day with a feeling of excitement. We were back on the road, heading north, but also, heading via the Forgotten world Highway. Corrr, there’s a highway name with a bit of romance. Much better than “Pacific” or SH43, or “The Pigroot”! The Forgotten World highway goes from Stratford to Taumaranui, about 150kms of mostly corners and hills. It goes through an area of the country that is mostly forgotten, parts developed and then left behind.
So, we were up and away from the camping gound by 9:30am – that’s early for us. We found a park opposite the Pak and Save supermarket that was long enough for us – we’re about 13m long with the car on the back. Then it was on to Inglewood and the truckstop there for fuel for Suzi. We turned off at Stratford at 11:10am, and started on the Forgotten World Highway. For a start it was typical Taranaki dairy county, except with a narrower road.

Then we climbed up to the first of the four saddles on the road, and what was considered the border with the “back country”. This was on a steep ridge, and from either side at the top there was a steep drop down to the valley below. The information board at the top said there had been hopes early on that a tunnel would be built to go under the saddle. It was clearly an excellent candidate for one, it was a very short distance through the ridge. From here on became progressivly more remote, and the road became more winding. Bend after bend we headed on – still on good sealed road – nominally two way. 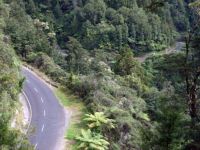 We stopped on another saddle covered in lovely native bush. There was a track leading off this one, and we walked 100m or so along it. There is really only one town along the entire highway, Whangamomona. It used to have a population of something like 300, and now has more like 30 people living there. And a famous pub. And a famous independant state – they declared themselves independant back in 1989 over the way the regional council were arbitrarily drawn in the local government reorganisation. They have passports and Presidents and independance days. A goat was President for a while a few years back – rather a lovely gesture. 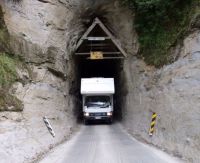 There was 12 kms of unsealed road, starting with the only tunnel on the “main” road, the Moki tunnel. This is a single-lane tunnel, high and narrow – but wide enough, and maybe 150m long. A fun feature of an interesting road.

The unsealed bit was through a dramatic gorge – one of the scenic highlights of the day. It was getting later in the day, so maybe traffic was thinning out. But on this 12 km section we met only one vehicle coming the other way, and nothing caught up with us going the same way. It was almost deserted. Which was good – there were some narrow bits. We finally reached Taumaranui at 7.15pm, and drove on to the Holiday Park – a pleasant spot just south of the town. We’d driven only 190kms from New Plymouth – it seemed to take all day. We’d made lots of stops along the way. And our average speed for the whole day was only 40 kmph – reflecting the narrow winding nature of most of the road.
It was certainly an interesting day along a challenging road through fascinating country. There is still adventure  along state highways in NZ.