It was around midday when we finally left Tauranga bound for Rotorua on Thursday 18 June. We’d been in the Bay of Plenty for 3 months. We enjoyed our stay and were also looking forward to moving on. It wasn’t long over to Rotorua, and we were soon at a private Park Over Property at Holden’s Bay. They are very helpful and friendly hosts, and they are well set-up for visiting motorhomes. We got our bikes off and had a brief ride along the lake which is only a block from where we were staying. The day was still sunny, but there was a cool breeze. We headed off in the car to tea and a lovely catch-up with Peter and Ann McKellar, friends from way back in the tramping club in Dunedin. Peter and I sampled the last bottle of stout I was carrying made by mutual friend Richard in Dunedin – it was a good way to exhaust my supplies. 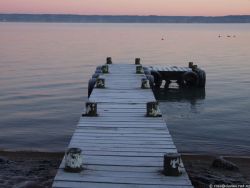 We woke on Friday morning to a very heavy frost – an outdoor thermometer showed -3 degrees off the ground. It promised a clear sunny day and that’s how it turned out. We’d planned a bike ride and ride we did. We headed off into town about 9.30am by which time most of the frost was disappearing. We called in at Mark and Kathy’s place – Mark is the creator of the wonderful www.nzmotorhome.co.nz forum. He came with us and showed up some great trails in the huge Whakarewarewa Forest. 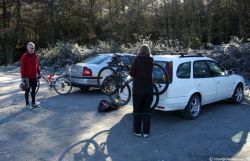 Mark said there were about 130kms of bike trails. We rode in on a frozen road, and in some corners the frost had been building up for days. Mark found some good easier tracks for us, it was the first time we’d been on our bikes for months (except briefly the day before) and the first ride on single tracks for a very long time. What a fabulous asset they have in this forest – surely the best in the country. 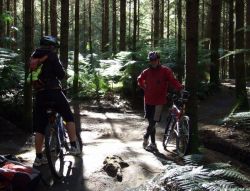 We warmed up, sort of. But were happy to head back to Mark’s place after a couple of hours. Mark showed me how to oil up Wyn’s gear cables – well he did it actually. But I did learn because the next day I was able to do the same thing for mine. Wyn’s had virtually seized after 3 months out in the rain. Kathy had made some lovely pumpkin soup for lunch and it was good to catch up with them. We’d met them in Alexandra back in February and they’d inspired our burst of activity – they are such an active couple.
We had a bit of a catch-up morning ourselves on Saturday. It was another frosty start to a clear and sunny day. We got some washing done, and then there is cleaning and topping up the water supplies, and a bit of a wash for Suzi. In the afternoon Peter and his son took us for a walk up the Jubilee Track on Mt Ngongataha, which overlooks Rotorua. 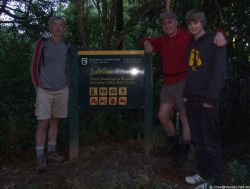 Peter is very active with the trust that manages a large native forest on the mountain. So we had a great guide for the walk. We made it to the top which has no view – the trees have grown up around it. It is great to see tracks made and maintained without gravel and boardwalks. It seems the soil here is so well drained that those sorts of things are not needed much.
Sunday was another clear and sunny day, after a bit of a frost. We headed in to the information centre and had a good walk around the lakefront and through the gardens. Everywhere seemed to have steaming and bubbling holes. 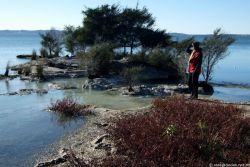 Monday was another clear and sunny day, after a bit of a frost.

We’d decided to head off north, via south in search of hot pools. It wasn’t that Rotorua lacked for hot pools – we just liked the idea of a retreat to somewhere rural. So we packed up, hitched the car up again, and headed off.