Checking the Coast to Cape Campbell

We were keen to explore further around the coastline to the east on Sunday. We’d seen some people further around on the Saturday and it looked like low tide was the best time. We knew that Cape Campbell was further around but didn’t know how far or whether we could get right round the shore to get there. There was the possibility of going overland but there were locked gates and he hadn’t been able to get any information. We’d anticipated a walkway but there was nothing. (It turns out that there is a walkway over the hills but it is private.)

We looked up the tide times and worked out that the afternoon would be best. After another leisurely morning and a bit of lunch we set off at about 1.45pm. There was a bit not far from the beach where we had to scramble around some rocks to stay dry but by this stage we realised that a couple of groups on quad motorbikes were coming around the same way so we figured there wasn’t going to be anything to block the way. 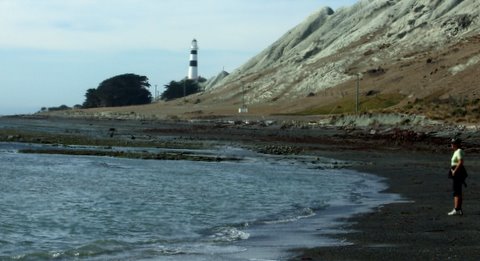 Approaching the lighthouse at Cape Campbell 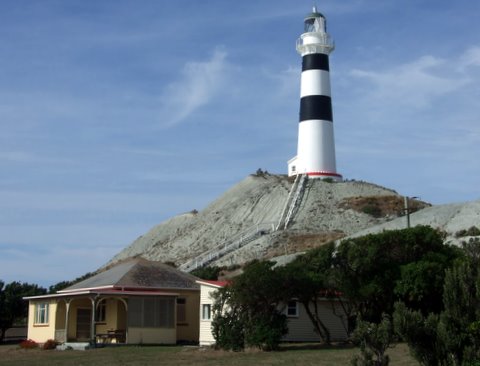 Lighthouse and house at Cape Campbell 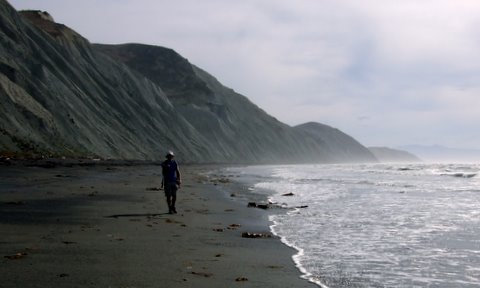 It wasn’t far to the first point (Mussel Point) and from here we could see the expanse of beach and cliffs right round to Cape Campbell and the lighthouse. It didn’t look far and the bikes had already disappeared so there was not going to be anything to stop us. We knew the tide was still going out and worked out that so long as we turned back by 4pm we’d not have any trouble. Our short outing was turning into a major expedition – not unusual for us. At least we had water bottles and a handful of muesli bars. We trudged along the beach under the cliffs. It was further than we thought. We could see why as we got closer; it’s quite a big lighthouse. It’s not one of your squat little ones on top of some cliff. This one isn’t far above the sea so needs to be taller to be seen. Once we reached the lighthouse we could see that there are a couple of houses in the small patch of trees that survive there. Presumably these were for the people manning the lighthouse and are now in private ownership. We climbed the steps to the lighthouse and enjoyed the view. It was much windier there; Cape Campbell is at the southern end of Cook Strait and is also more or less where the South Island turns the corner and goes south towards Kaikoura.

We headed back the same way and were a bit ahead of the tide so got more of the beach to walk on which was firmer. It was still a long haul back but we were happy with our outing. It was our first walk for a while and a 4-hour one at that. We subsequently found some information which said to allow a full day for the walk and that it can be blocked by spring tides. There were a couple of points that I’d have thought would have been interesting at any high tide. In any case, we judged the tides well, and it was definitely a full afternoon’s walk. We retired tired and happy campers that night.