Back from the Beach to Blenheim

Monday 22 March was going to be back-to-Blenheim day but it started out windy and got windier. There were high wind warnings out and we didn’t need to be going anywhere. Plus Wyn was trying to fight off a cold. So neither of us took much convincing that there were worse places to be on a Monday than Marfells Beach in Marlborough. We passed the day catching up with things and keeping an eye on the sea and watching the birds. We noticed that the sea gulls were passing the day huddled in groups on the beach, heads into the wind. Like them we hunkered down for the morning. 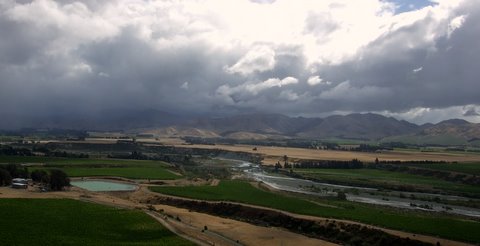 Storm coming down the Awatere Valley from near Seddon

We decided on a bit of an explore in the afternoon. We thought a look at the salt works would be interesting but a phone call revealed that they only did tours for big groups. There was a visitor centre marked on our Hema atlas map but this proved to be non-existent as well. It was interesting to see how many cars and campervans were driving around looking to see what there was to see. We headed back through Seddon and out to the Yealands winery to taste some of their nice wines in their amazing winery. It was all eco this and environmental that and sustainable the other. It just shows what can be done with some flair and determination (and money?). We were told where to go to a good lookout point towards the coast; and it was. There was a great view out over Cook Strait and south east to Marfells Beach and on around to Cape Campbell and the lighthouse. Something unusual happened on the way back to Marfells Beach; it rained. Not a lot but there was definitely precipitation. If there is one thing they could do with in those parts it is rain. It mightn’t please the grape growers but the rest of the place could do with a good wetting.

By Tuesday we’d run out of excuses so packed up and headed back to Blenheim. We headed to the POP at Rita’s and found a spot there. We had good mobile coverage and started to catch up on a few things. We popped round to visit the motels in the afternoon and that was about it for the day.

Wednesday promised rain and delivered by the bucket load. There was lightning and thunder; one clap must have been almost overhead! We needed to get Suzi to the dump station but everything was so wet we delayed that. The morning was so overcast that we struggled to make any power at all from the panels. We had a walk around town in the afternoon when it cleared a bit. The river front part is a nice stroll. At about 6pm we took Suzi off to the dump station. There’s only one public one in Blenheim and it’s at the Mobil petrol station right on a busy SH1 roundabout. Getting in and out at some times of the day is a mission in the car and not a good idea in an 8 metre truck. Anyway it was easy in the evening and while out we visited the Shell truckstop along the road and topped up with fuel. Back at Rita’s we weren’t so successful getting Suzi levelled up on our blocks; the ground was so slippery and I need to improve the shape of my blocks. We got her level enough and that was it for the day. This was the first evening for a long time that we started without our batteries fully restored.

Yesterday (Thursday) was a better looking day, albeit with a keen southerly wind in the morning. I managed to get the blog caught up to last week and tried an easier way of uploading photos which proved much easier. So now we have blog posts with photos – more or less. Yahooooo…

We made up lists of things we needed to do in town and had a very successful afternoon catching up with most of them. Yahooooo… yahooo. We called in to visit Wendy and John at the motels for coffee and hot cross buns before retiring back to Suzi. I made Thai green curry chicken stuff for tea, which I’m so excited about. It was one of sister Ju’s staples which always impressed me. We passed the evening learning more about Kiwisaver – how much fun can you have?

4 Responses to Back from the Beach to Blenheim