Sunday. Well it certainly was an uneventful day compared to ‘Shakedown on the Blenheim Bridge’ anyway but hear goes. The day dawned cold at White’s Bay and was quite a shock compared to the warm weather we have been really enjoying up here.   I wasn’t in any hurry to be going anywhere, it was Sunday after all.   I was still suffering with my sinus cold and had also managed to pass it on to Ross so we were both happy to keep warm inside.  I was ploughing my way through a Kathy Kelly book , ‘Lessons in Heartbreak’ that Ross’s sister had given me.  It’s a new author for me and I am enjoying it – and still marvel at the fact that I have time to read books.  I sometimes still feel like I should be doing something. “Yeah right” I hear you say. 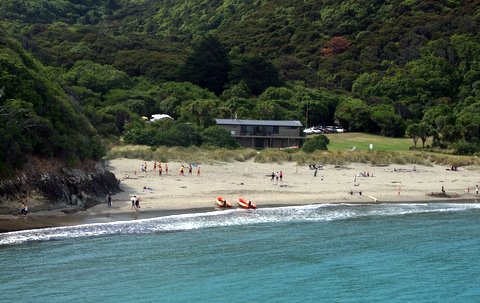 White's Bay the day before 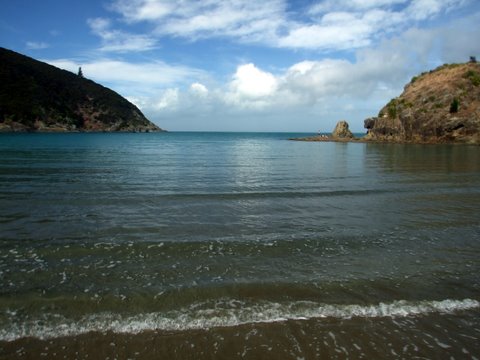 The lovely White's Bay also the day before

There were a lot of people arriving at the carpark and heading off to the beach.  Mid morning I decided to check out what was happening at the beach.  Small people in wet suits and surf lifesaving caps were gathered everywhere with their parents and the instructors were endeavouring to get them warmed up before their training and to stop them getting hyperthermia I reckon.  The poor little Nippers.   I soon retreated back to Suzi albeit a little guiltily.  The morning passed lazily as it had started but by mid afternoon I was feeling a bit restless and talked Ross into going for a ‘short’walk.

We had seen one called Pukatea Walk that was a short 10 minute loop that meandered from the uppermost camping area down alongside the Pukatea stream through regenerating forest down to the cable station. That sounded like us as we didn’t have much energy.  On the way we checked out all the signs leading to other walks, 8-9 hr tramp to Mt Robertson sounded like a real slog but after emerging out at the beach I spied the 1 hour one way track to Rarangi.  I suggested we just walk a wee way up.  Up we started and it occurred to us that it had probably been an access road at some stage as it was well formed.  Then we literally zigzagged our way up through pine forest and kept on thinking we will just do one more zig or zag and turn back.  The reward was a chocolate muesli bar and water which we had carried with us which we enjoyed just before we reached where the track emerged out onto the road for about 500m before descending to Rarangi.  Happy to have reached the top, we came down the way we had come up.

We hadn’t made a lot of power from the solar panels due to the overcast cold day so watching TV or spending time on the computer wasn’t going to be a happening thing.  After a leisurely tea, Ross was feeling miserable and took to his bed early as did I, reading till late.