Showdown on the Blenheim Bridge (and Whites Bay)

Saturday 27 March was an auspicious day – we’ve been on the road for 15 months living in Suzi. It was also a fine and warm day so we decided to go to the beach for the weekend. Blenheim was hosting a bike event called the Graperide where 2,500 cyclists on road bikes race/ride for 105kms from Renwick to Picton to Havelock to Renwick. It seemed like a good idea to be somewhere else. We had been told that Whites Bay was a lovely beach so that seemed like a good place to aim for. And it was Wyn’s name so that seemed auspicious. We arranged to leave the car at the motels – the road in to Whites Bay is a winding one and we had no need for the car anyway. Eventually we headed north out of Blenheim on SH1.

Only just in time we saw the bridge. It’s a bridge over some river I suppose but I’ve never ever managed to look out from the bridge. It’s the bridge from hell. It has concrete arches on either side that are high and very very thick. There is a sign that says something like “Caution Wide Vehicles” or something equally understated. In any sensible society it would be a one-way bridge but Blenheim just puts up a sign suggesting caution. What is really scarry are the scars. Every arch and pillar and part of the sides of the bridge is deeply scarred where some solid part of some innocent wide vehicle has made heavy contact. It’s clearly a bridge that knows impact and that has left its mark on many wide vehicles that are perhaps slightly less wide after the experience. It is truly a frightening sight and we remembered just in time that we had resolved previously to always stop in future and put Suzi’s mirrors in in the hope of keeping her safe. We managed to turn round the block at the last minute which gave us the chance to pull the mirrors in. So far so good. About then I discovered that pulling back out into the traffic without the mirror was  not a very good idea and it was a long way to stick my head out to check for traffic behind.

Eventually we got back out onto SH1 and the approach to the bridge; which by the way is curved at both ends. It’s already the bridge from hell and to that they add the worst possible access with no visibility until the last moment. There was a car on our side ahead of us most of the way across and a truck at the other end about to cross. We headed across, slowly, happy that we’d remembered to pull the mirrors in. At about this point we remembered someone had told us about a local rule for this bridge where trucks treated it as one-way and gave way to other trucks. Oops, we’d ignored the rule, albeit innocently. So this truck driver got annoyed or something and decided to start across as well. We were already committed anyway, and he was a truck and trailer unit that wasn’t going to back very well so he was soon committed as well. Given that our mirrors were pulled in we weren’t going to be very good backing either and there was probably a line of traffic behind as well. It was rapidly getting stupid. The truck driver flashed his lights at us and he probably wasn’t saying “hello”.  So I flashed Suzi’s lights back at him to show that we had lights as well. He was driving across the centre line, probably to intimidate us but also because that was where he’d normally need to drive. As we got closer he managed to squeeze most of his truck and trailer back onto his side of the road and then he came to a stop.

His was a bigger truck so I pulled up alongside his cab and looked up and said something about not realising it was a one-way bridge that was meant to be sarcastic but I think it was lost on him. Then I asked what we were supposed to do. He said he supposed we should have a go at getting past him. This was now very very stupid. We don’t know how many cars we were both now holding up and we probably ran a reasonable chance of getting wedged and blocking SH1 for quite a while. As luck would have it we already had our mirrors in which meant we were quite a few centimetres narrower and in the end we squeezed past with a few centimetres on either side. Greatly relieved we stopped once we were over the rest of the bridge and around the corner and restored our mirrors and our nerves. It really is a very dumb bit of road. It is a narrow bridge that is regulated by a local rule that trucks treat it as one way. This is sensible, except that the locals don’t warn non-locals, other than with a sign that says “Caution wide vehicles”.

The rest of our journey to the coast was uneventful after that and we were soon at Rarangi Beach where there is a DoC camp at the far end. The beach is a stony sort of a beach and the whole thing doesn’t have a lot of ambience. The road from there on to Whites Bay is only another 7 kms or so, but it is an interesting trip; up and over the hill. It is sealed all the way and mostly two-way. 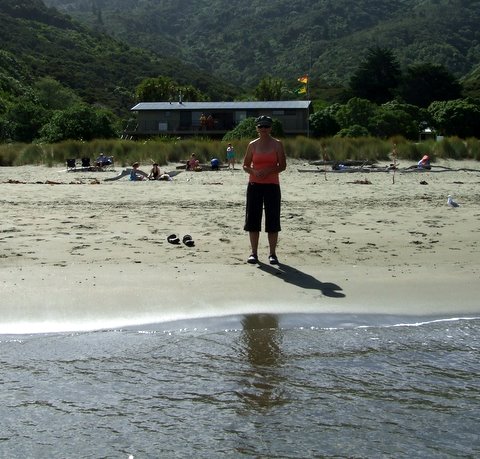 Whites Bay from the rock outcrop 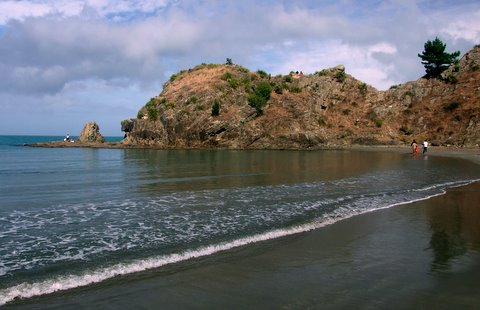 Whites Bay is a gem of a bay. It has another DoC camp that is the only thing there apart from the surf club building which is a joint venture with DoC. Oh and also the historic cable house/building that housed the first cable station where the first telegraph cable came across Cook Strait a very long time ago. We found a spot to park up and were soon settled in. We enjoyed a walk on the beach before the wind sprang up which sort of ended the nice day. Later after dark we heard a morepork and we realised it was a long time since we’d camped in proper bush. We liked Whites Bay.

1 Response to Showdown on the Blenheim Bridge (and Whites Bay)