Thursday morning was a lovely one. The weather forecast had been promising good weather for several days but somehow the sounds had been missing out. The forecast was good for several days ahead as well, it looked like being good for the rest of the week. Whatamango is noisy in the morning. There’s the bellbirds (and tuis?) for a start. They are prolific. Plus there’s pukekos and wekas and paradise ducks. And heaven knows what else out by the water. Wyn and I had a wander around the water’s edge before packing up to leave. Most of the DoC camps have someone who keeps an eye on things – if not someone in residence. The guy at Whatamango was particularly helpful and hospitable. 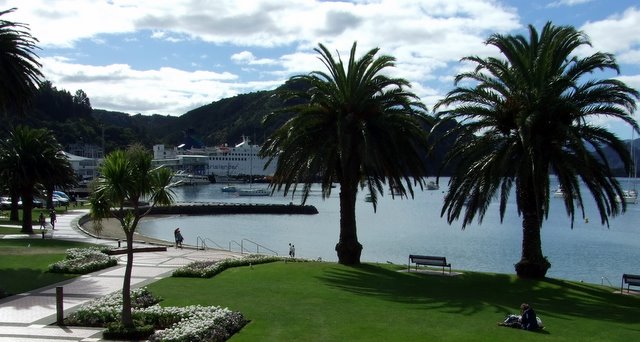 Detail of hotel on Picton waterfront 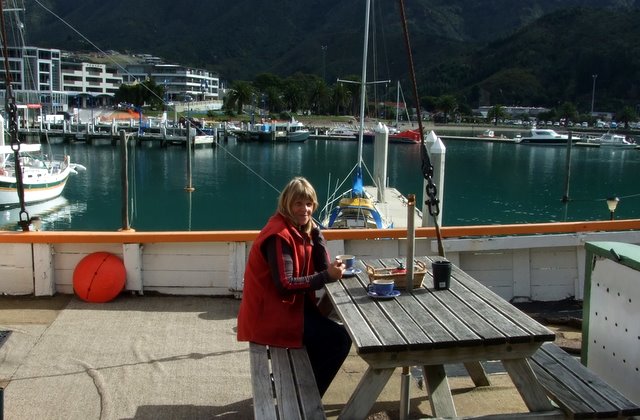 Coffee at the cafe on the boat at Picton 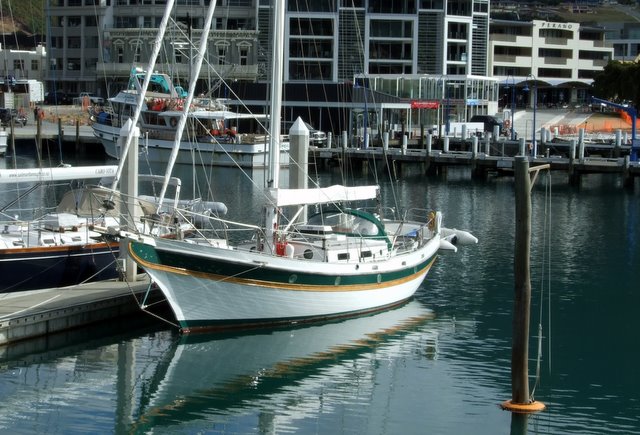 Yacht moored in the marina at Picton

Picton from the lookout on Queen Charlotte Drive

A bay we visited on Queen Charlotte Sound

Wyn and Laura headed off to Picton in the car to get a few things in the shops while I followed eventually in Suzi.

I managed to get the same park by the iSite which was good because I wanted to visit the iSite for information on the sounds. The place was fairly busy, with a big slow-moving queue of people waiting for help. I wonder if these iSites haven’t lost the plot a bit. They spend most of their time booking accommodation and tours for people and if you just want some free information on free things to do you have to use a lot of your free time waiting to ask. They get a sizeable commission for booking people – a couple of nights accommodation booking could earn them $20 – $30. They are not there to help people with information – they are there to generate revenue for the local council. While I was loitering one person appeared to be making a booking for tourists for the interisland ferry. The iSite is about 3 minutes walk from the ferry terminal and I’m sure they could have been directed to the terminal to make the booking there direct. Instead the iSite made the booking to get their cut and held up everyone else in the queue for 5 minutes in the process. We’d previously called into the Blenheim iSite to pick up the latest booklet on DoC campsites. There were none on the stand so I waited and asked, only to get one of those “if it’s not on the stand then we haven’t got it” sort of answers that are so infuriating. So I asked when they might get some more and the answer was “When DoC drops some more around”. So I enquired whether they would let them know that more were needed and the answer was that it wasn’t there job to do that. Blenheim iSite 1 – Visitors 0.

Wyn and Laura arrived at Suzi and we had lunch and had fun watching the kids having fun sailing hire model yachts on a little lake in a little park. There were also little trains circling the little park providing much pleasure for little kids and adults alike. It was something I might have expected to see a few decades ago and it still works in Picton. Picton is a bit like that. It doesn’t seem to change much, despite (or because of?) the enormous number of people who pass through. We had good mobile coverage so Laura was catching up on the internet. Wyn and I took some time to wander around the waterfront and stop for a coffee on the funny/lovely old sailing boat hulk that is a cafe. We were starting to figure out where some of Picton’s walks are. We’ll go back some time to try them out.

Eventually we made a move to move on. We didn’t hitch up the car as we weren’t planning on going far and the road around the Queen Charlotte drive is particularly twisty. We stopped at a few lookouts and one bay along the drive. It was a glorious afternoon and a beautiful drive even if my main focus was on safely negotiating the corners. There is a DoC campground along the way that is a full camp ground in a lovely bay. We’d have to pay full rates for that and being cheapskates elected to drive on a few more kilometres to Aussie Bay where there is a basic DoC campsite where we can use our pass. It is small and a bit cramped and right beside Queen Charlotte Sound and was a lovely place for the night. We could see a settlement across the Sound which we worked out was Anakiwa. We were on our way to explore the Marlborough Sounds.