At Whatamango Bay – near Picton

Wednesday 7th April started early – the boys were going home. Michael and Andrew had a long drive home to Dunedin – approximately 750kms. So we were up before 7am and they were away by about 8am. It had rained in the night so it was wonderful to have their camping gear already dry in the car. Suzi seemed a bit empty after they had gone. The morning was not very inviting so we sat and lay around reading. I am reading the Lonely Planet ‘Travel Photography’ book and it is inspiring me to rediscover my camera. I’ve used the Fuji Finepix 6500 for about 4 years now and am still getting to grips with the features. This morning I was reading about the continuous shooting options and the exposure bracketing feature so there was a lot of clicking and looking.

Cabin fever developed after lunch so we went for a drive. I wanted to explore over the hill to Port Underwood. It looked like the road was sealed to the top so that was a good start. At crest of the hill there was a great view out over Port Underwood and I got out to record it on my camera. At this point I discovered that the camera card was in the laptop back in Suzi. “Darn!” I said. The road down the other side was also sealed all the way. It was more direct and steeper. We were surprised to see the size of the small settlement at Port Underwood, maybe a couple of dozen houses. We had a look around and drove on to the next bay – in search of the ‘whaling relics’ noted on our map. There was an old whaling pot monument but that was about all that we found. At this stage we weren’t far north of Ocean Bay that we’d reached with Michael from the south a couple of days before. But we weren’t bothered about joining up our dots and we headed back to Whatamango. 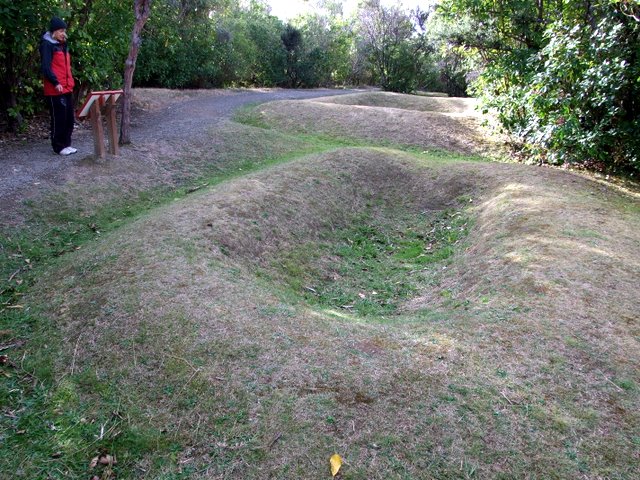 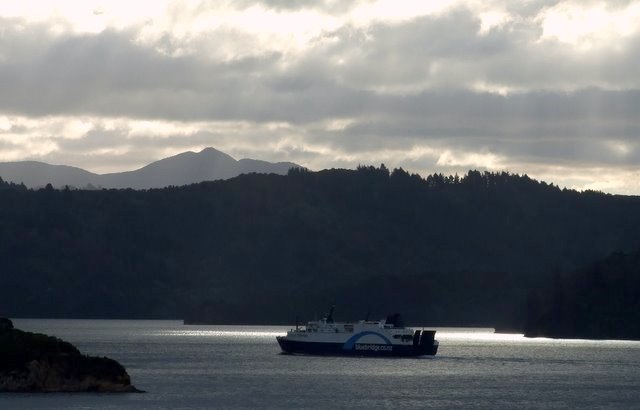 We were also keen to explore Karaka Point on the road back towards Picton so picked up the camera card and carried on the few kilometres to the point. It is the site of a Maori pa which is well explained and interpreted. It is a great viewpoint out over Queen Charlotte Sound – which is why it was such a good pa site. It was only a couple of minutes walk down from the road and is well worth a visit. The food pits are still very evident. There was a keen wind but there was shelter down by the water. There were dramatic views out over the sound as the sun and clouds came and went and it was a good spot to watch one of the interisland ferries pass by.

We were soon back in Suzi warming up and it wasn’t much later before the boys reported that they were safely back home in Dunedin.