The Short History of Nearly Everything About Scrabblee

Now that we are Scrabblee World Champions it might be time to reveal the history of this new board game. New and exclusive that is; it is only played by us since there is only one board in existence. It is a long story so make a cup of tea, get comfortable, and read on. It all started with bubbles. I’d given Andrew a huge bubble wand thing for Christmas which sort of worked and the only trouble was we used up most of the bubble mixture. So come Boxing Day when the rest of Dunedin was queuing in Harvey Normans for $288 netbooks and $36 DVD players we were in town looking for cheap bubble mixture. That and large soft flying discs which is why we ended up in the Happy Coin shop next to Kathmandu. While looking for bubble stuff there I came across some cheap copies of board games. I figured Scrabble would be a good addition to Suzi’s games repertoire, and the price was right so I handed over some cash and Scrabble was mine. The board looked the part except it didn’t like to lie perfectly flat. And there was a nice cloth bag to keep all the tiles in which seemed like a good idea.

Later, in January sometime, Wyn and I decided we’d better have a game of Scrabble to get the hang of it. We realised we needed a dictionary of some sort to settle arguements/discussions and acquired an Oxford Gem dictionary which was cheap in Paper Plus in Alexandra; almost as cheap as our cheap game of Scrabble. It claims to have 150,000 words but still fails to have the ones we expect/hope. But it is the official dictionary for our purposes which is useful. We struggled with our first game. We only managed short words and ended up cramped over one side of the board with the other side unused. We were a bit discouraged, thinking it must be us.

In February when Andrew came up for a weekend conversation turned to Scrabble; Andrew had been keen for a game since back at the Happy Coin shop. He’d been impressed about how shamelessly a copyright game could be copied. So we got out the game with the lovely little cloth bag for the tiles, and had a game with the three of us. Again we struggled to make much headway; our words were short and didn’t give much opportunity for expansion. Towards the end of the game one of us noticed the coincidence that not one word on the board had used the letter ‘E’. A quick check of what we held on our holder thingies confirmed that we didn’t hold any ‘E’s either. The board had a list of how many of each letter we should have and it claimed that we had 12 ‘E’s to play with. A hurried rifle through the lovely little cloth bag of unused letters confirmed the awful truth. Our game of Scrabble did not have one single letter ‘E’. It was not in fact Scrabble at all. It was a hobbled version that actually should have been called Scrabbl. We’d just played the second ever game of Scrabbl which was interesting. That it took us almost two complete games to realise the fact is tragic.

We laughed for a bit. Then we laughed some more. We had a go at composing a letter of complaint to the Happy Coin shop that didn’t use any ‘E’s and that was funny. It was all quite funny, except for the bit where it took us two games to get the joke.

I am someone who keeps all my receipts, but do you think I could find that one from the Happy Coin shop. Later when we were back in Dunedin I went back to the shop and discovered that they didn’t have any more board games; not Scrabble or Scrabbl or anything. I realised that I didn’t have a hope trying to explain about our game with no ‘E’s; Scrabbl was mine for keeps.

Somehow a world with no ‘E’s didn’t seem like a fun place. So we started to think of ways we could improve Scrabbl, preferably something that involved ‘E’s. We debated making some wooden tiles with the same sort of shape but realised that they’d feel different in the lovely little cloth bag. In the end I decided to use some of the existing tiles, starting with the two blank ones. What is it with jokers and blank letter tiles? Why do people always expect an easy option? Anyway, blank tiles look blank on the board. So I got out the felt pen and made them into our first two ‘E’s. So far so good. 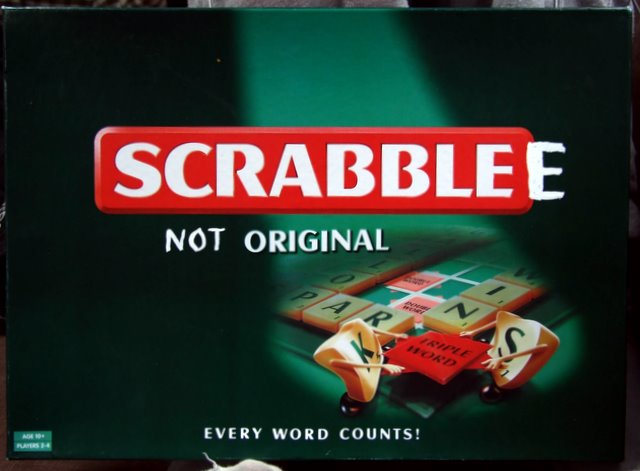 Then there were the ‘Z’ and ‘Q’ tiles. I’ve never liked them and have never dreamed of spelling QUIZ on a triple word space. They are just unhappy letters. So out came the felt pen and we had two more ‘E’s. It was only four so far, but that’s a lot better than none – trust me. I’d always been suspicious of the ‘X’ as well; seriously – how many words can you spell with an ‘X’? It seemed a waste of a good tile and soon wasn’t when it became our fifth ‘E’. I was dissuaded from plundering any more letters but I felt we needed more than 5 ‘E’s. So I came up with the concept of cardboard ones. I cut out 8 bits of cardboard and made them honorary ‘E’s as well. Clearly they’d be dumb in the lovely cloth bag. Anyone could tell they were ‘E’s and pick them out. So the rule became that any ‘E’ played got replaced with a cardboard replica and the ‘E’ tile got put back in the bag to be reused. The cardboard cutouts look a bit thin on the board – we might have to work on something as thick as a tile. But meantime we have a game with ‘E’s.

That was all very well but with only 5 initial ‘E’s it seemed we needed a bit of an incentive to encourage the use of them. In Scrabble ‘E’s only score one point. But this was now our game so we could score it whatever we wanted. We might have doubled it to two points but I went giddy and made it three. What the heck. Each ‘E’ played in Scrablee is worth three points. Scrabbl was a game devoid of ‘E’s. Scrabblee was to be a game that worships ‘E’s. The ‘E’ was no longer common – it is celebrated and encouraged. Thus was conceived the game of Scrabblee. When Andrew came up at Easter he was keen to try it out. The rules were set and that game was declared to be the first game in the history of the world. It proved to be a much better game than Scrabbl and we soon had the board covered in words, many of them using ‘E’s and scoring better than ever. The rules got a bit tenuous when we started running out of tiles in the bag and the ‘E’s got replaced and put back in the bag so came straight back to the player – sort of like a never-ending cup of coffee that always gets topped up. But by the second game we’d figured out the implications on ending the game and the rules are now robust.

I guess a proper game of Scrabble would have been fun. But to be honest we’ve had a lot more fun with our version that came incomplete. Scrabblee is our game and any game can be a world championship. If you want a crack at the world title, you’ll have to come visit. We’re ready.

1 Response to The Short History of Nearly Everything About Scrabblee