We’d had a good relaxing Easter at Whites Bay but by Tuesday 6 April we figured it was time to move on. Michael and Andrew had to drive back to Dunedin and put off leaving until Wednesday. In the meantime we came up with a plan to shift further north, past Picton. It proved to be a good plan as it meant we got mostly packed up on the Tuesday. It was still cloudy and overcast and it had even rained a bit in the night. Not only had all the campers left but all the motorhomers had moved on as well. We started packing up the tents which involved a bit of drying as well. We also cleaned Michael’s car; or more accurately I got him the hose and brush. Everyone pitched in unpitching everything and it still took until 1pm by the time we were ready to go. 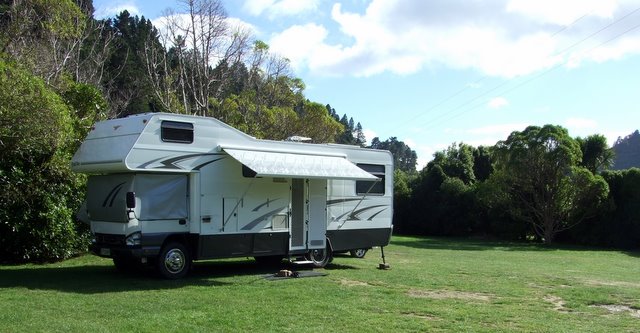 Suzi at the DoC camp at Whatamango

Michael needed 98 fuel for his Subaru so headed off to Blenheim with Andrew and Laura. We needed more food supplies so Wyn headed off in the car to the supermarket in Blenheim. Suzi needed more diesel and needed to empty her grey-waste tanks so I took her off to Blenheim as well. We all met up again in Picton and found some hot chips for late lunch.

We headed out past Waikawa Bay to the DoC camp at Whatamango.  This is on the road over to Port Underwood. It gets narrow and winding towards Whatamango and it was a bit of a surprise to meet a logging truck. The surprising bit was that he was using part of my side of the road as well. I was able to stop fairly quickly and left him the job of driving past Suzi. He inched past, getting mostly back onto his side of the road. The entrance to the camp at Whatamango is a bit of a trick; over a narrow bridge and then an immediate right-angle turn left. The camp was exposed to the down-valley wind so we looked for a sheltered spot. I asked some fellow-NZMCA motorhomers if it’d be OK if we parked near them but they were quite rude. We eventually found a reasonably sheltered spot and set up for the night. Michael put up our small tent for himself for the night and Andrew and Laura slept in Suzi. This meant Michael and Andrew could get away early the next morning without having to pack up anything much. Which was lucky because it started to rain in the evening so it proved to be a very good plan. This was our last evening together and we passed it with the third game of Scrablee ever played in the entire history of the world – all five of us this time with Wyn and I playing as a team. We did well but there was a suggestion that since we were two we should divide our score in half which relegated us to third.