If Elaine Bay had made an impression on us when we arrived the previous evening, then next morning was something else again. The morning was sunny and calm. I got up quietly and grabbed my camera and my tripod and made the most of it. As I was photographing the jetty I realised that this view was one used in many Marlborough promotions. It annoys me when tourist promotions show stunning photos with no information. It’s as if we’re supposed to be satisfied with the brochure. Or maybe we’re supposed to spend years criss-crossing the area looking for the scene. Anyway, it was fun to realise that we’d parked in the middle of one of the iconic Sound’s landscapes. 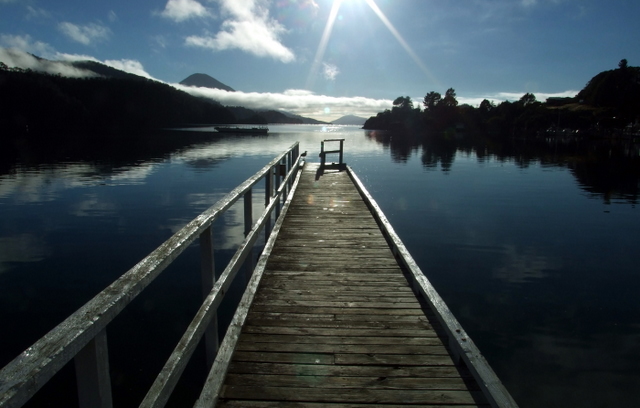 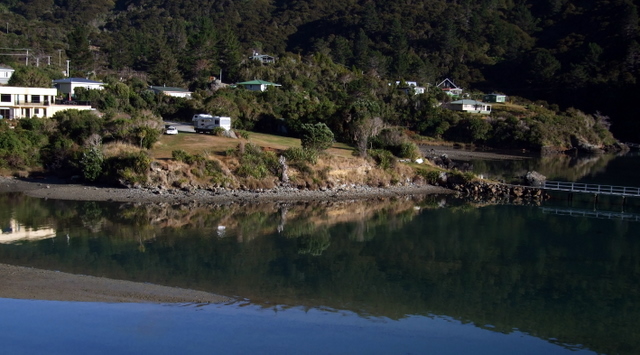 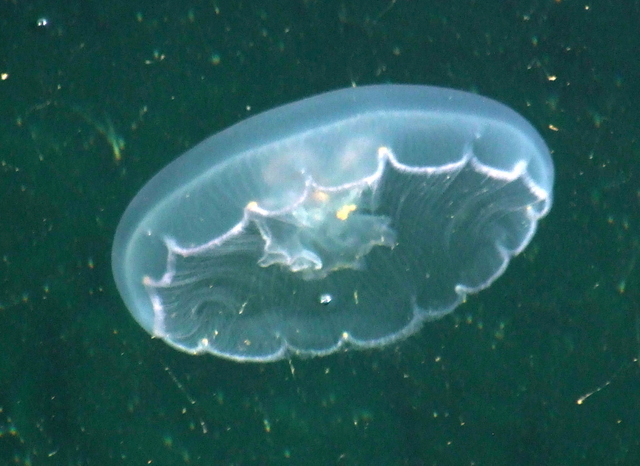 Elaine Bay is a peaceful little settlement at the end of a road with no services other than peace and quiet and views to live for. It did turn out to have a busier side as well; there is a wharf at the end of the road where the mussel farming/harvesting boats come in to unload onto trucks and trailers. My photo exploration took me as far as the wharf where I saw lots of jellyfish close to the surface. Back at Suzi the other two had surfaced and I mentioned the abundant jellyfish at the wharf. Laura headed of down to the jetty to see for herself. I followed to explain that I meant a wharf some distance away but by then she’d discovered that they were even more abundant at the jetty. There was something hypnotic about watching them; they move with grace and beauty through the water. 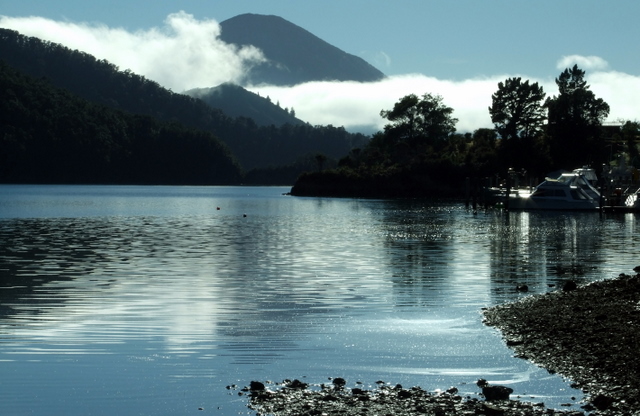 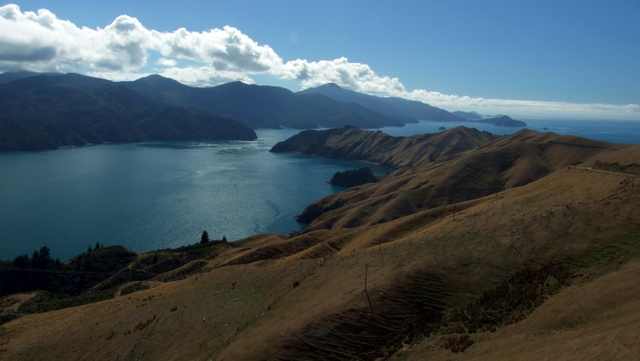 Towards D'Urville Island and French Pass 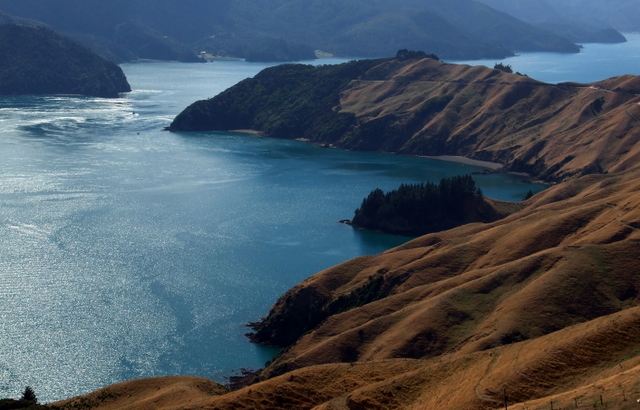 This was our day for driving in the car to French Pass. This is a sea channel between the mainland and D’urville Island with very strong tides. I’d heard a little about it and it was something I’d always wanted to see. The road traverses along a ridge to the north before finally dropping down to French Pass itself. The gap between the mainland and the island is narrow and the tidal flows are extreme. From a long way away it is easy to pick out the gap and we could see the tidal flow and the turbulence created. There is a walk to a viewpoint which is well worth the few minutes. As much as seeing the tidal flow you hear it. There is a roar from the tide passing over rock outcrops. It is like a massive river; like the Clutha times ten. There was information there explaining it. I’ve included photos of some of the story in the next post. The pass was a big shortcut for the ships moving between Wellington and Nelson and it must have made for some exciting times. They put markers and beacons on rocky outcrops but early ones got smashed by boats running into them. The story about the construction of a concrete base for a later one fascinated me. And impressed me. 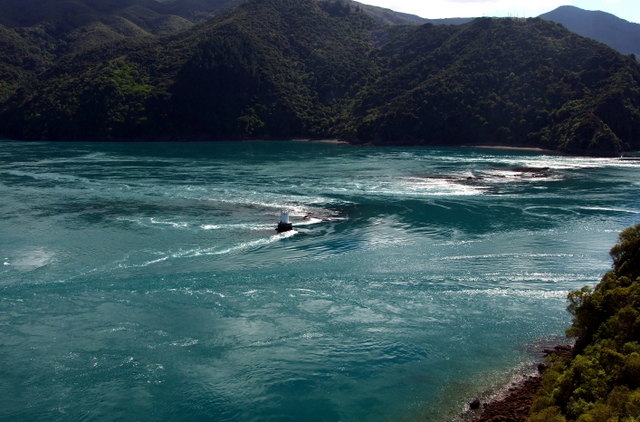 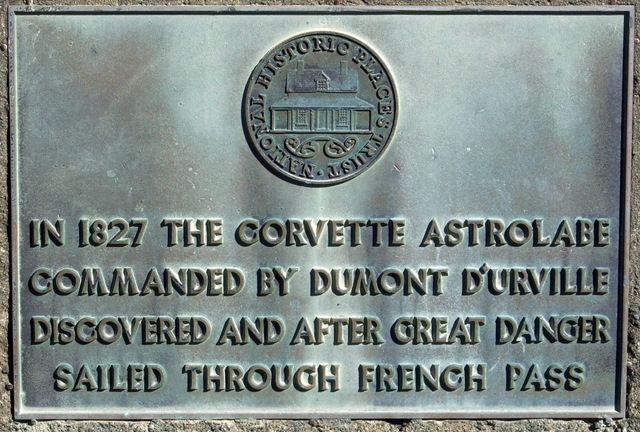 I was the last one to leave and no sooner had I started back up the track than I heard a fishing boat approaching the pass. I raced back to watch it pass through. It the current is doing 10-20kmph, it’s not enough for the boats to just ride the current. They would zoom through at 10-20 kmph but with no steering at all. Boats need speed relative to the water for steering/navigation. So this fishing boat put the pedal to the metal once it reached the pass at what was effectively the top of massive rapids. It was smoking, both literally and figuratively, shooting the rapids. French Pass is a fascinating natural phenomenon. I would be well up my list of 10 most awesome natural sights I’ve seen in New Zealand. 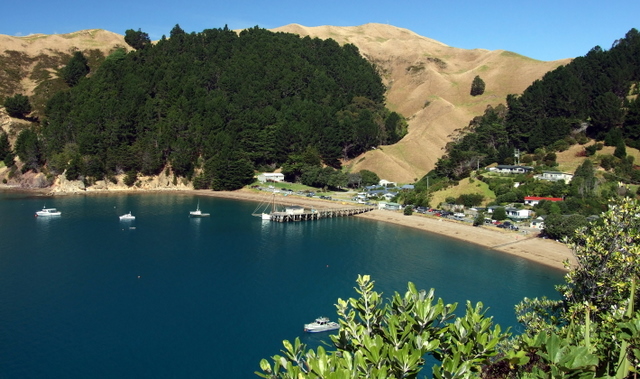 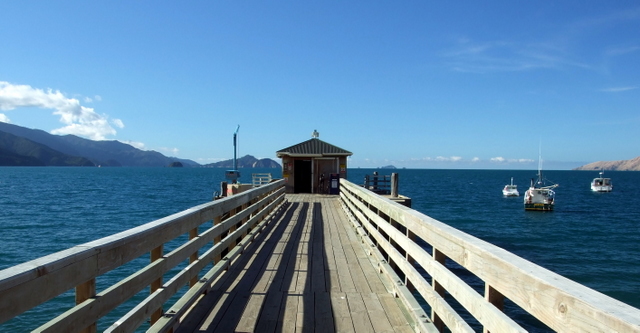 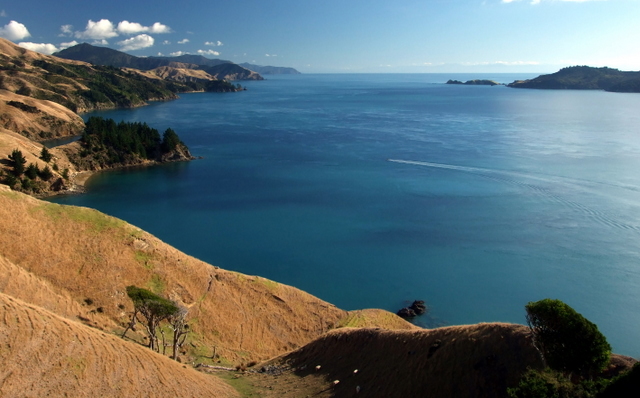 We had lunch around the corner at the French Pass settlement and passed the afternoon looking around and watching the boats coming and going at the boat ramp. Mostly it was launching and retrieving speed boats for recreational fishermen. It seems they can fish for Blue Cod from there whereas they cannot in the Sounds. Which would explain why they dragged their boats so far over such a road. 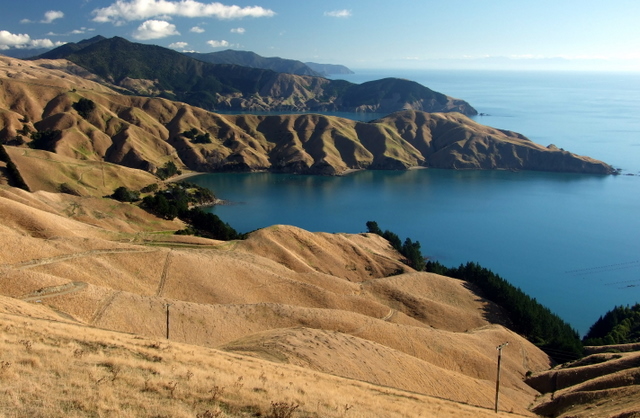 From the French Pass Road

Another view from the French Pass Road

Eventually we dragged ourselves back over that road as well. It is unsealed between the turn-off to Elaine Bay and its end at French Pass. We turned off back down to Elaine Bay just as the sun was leaving the bay. It was a pleasant evening and we were able to watch a number of large manta rays swimming around close to the waters edge at the jetty. All that was missing were dolphins. Little did we know that a couple of them would turn up next day for a display.

The road back to Elaine Bay