Homeless in Our Home Town

Friday 3 September and we were parked up at the Wingatui Racecourse. Near Mosgiel, near Dunedin. When people ask where we come from and we can’t be bothered explaining that we come from nowhere in particular then we say we come from Dunedin. It is where we came from before we came from nowhere and we still have library cards and we still get a vote in Dunedin.  It seems like you have to have a vote somewhere. People want to know what you do and it can be a bit awkward when you’re not working. So then they want to know where you’re from and they can be a bit surprised if we say we’re from everywhere and nowhere.

So we’re from around here and it’s funny being back. Funny peculiar. It’s where we’re from but we understand it less and less. And it’s changing and evolving and we’re seeing it from further away. One thing about being in Dunedin less is that we have to defend the weather less. We were back on the first Friday in September and it was cold. It was wet and cold and raining and at a couple of stages there were snow flurries with the rain. Maybe that was the weather reminding us of what we’d been missing.

Wyn headed off into the city – shopping for wedding dresses. Or more correctly, shopping for a wedding dress. There’s a wedding coming up – ours. This much I know. Apparently she’ll wear a dress and that’s as much as I can find out. As to the rest, there’s a veil of secrecy. Whatever happened took much of the day and seemed to have a good outcome. Towards evening we headed off to Taieri Mouth. The local branch of the NZMCA was having a motorhome gathering.  We’ve been members for about 3 years and never been to a local rally. This one fitted in nicely so we decided to make the effort. 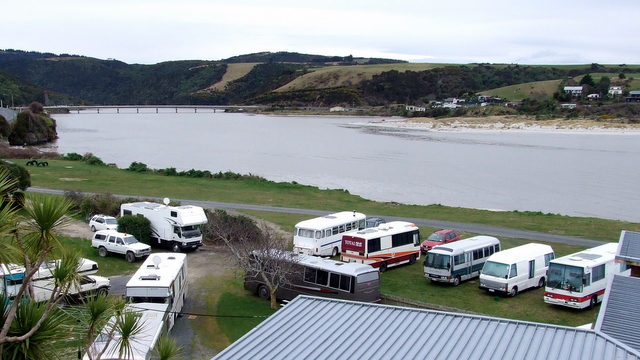 Motorhomes at Knarston Park at the Taieri River mouth

The rally was at Knarston Park beside the river. By the time we arrived most of the others were there already – about 19 motorhomes in all. We caught the last of Happy Hour in the basement nearby before retiring to Suzi for tea and for the night. We were happy to just relax after being on move for over a week – it always seems to take time for my brain to catch up with my body. I set up Suzi in a bit of a hurry – not wanting to miss at least part of Happy Hour. So I forgot to put down our stabilisers that take a lot of the rocking out of the springs. We use them most of the time and they work well. Except this night I forgot to deploy them.  This meant that wind gusts rocked Suzi more that normal. I woke in the early morning to find Suzi rocking – as if the wind was blowing except this was quicker. My brain got going enough to work out that the wind wasn’t blowing at that moment. My brain’s next suggestion was earthquake. I know it’s important to stay calm during disasters. Wyn didn’t stir. I went back to sleep.

We woke late-ish, and were slowly sorting ourselves out to get over to the basement HQ for morning tea at 10.30am. We were near the basement and at some stage started hearing stuff over outside speakers. It sounded like news about some big event so we turned the TV on. We were immediately greeted with live pictures and accounts of damage in Christchurch over a banner saying “Christchurch 7.1 Earthquake” or something like that. Disbelief was our first reaction. Christchurch was not the sort of place associated with earthquakes and faults. Plus having left there less than two days before made it even more surprising. It looked fine when we left. Maybe this was some sort of TV show to raise awareness. But no. It was real and the reality started to become clear. 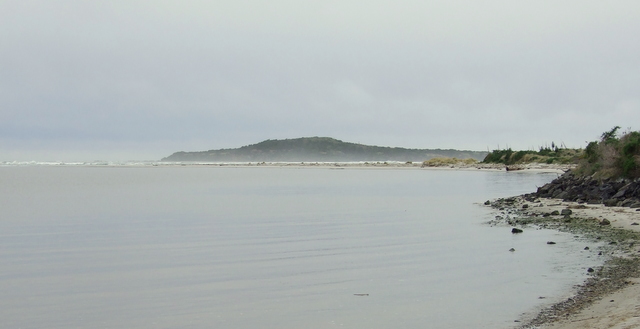 Looking down the Taieri River with Taieri Island in the distance

A Taieri Mouth fishing boat heading off out to sea

Like everyone, we know people in different parts of the city and wondered how they had fared. My brother lives in Rangiora and when the damage in Kaiapoi started getting mentioned I got more worried about Rangiora. I was relieved to find out by later in the morning that they were fine and virtually undamaged. The thing is though, damaged or undamaged, every one of say 400,000 people has been through a very traumatic violent and frightening event. Those of us who haven’t won’t know just how bad it was. Those who do will wish they didn’t. 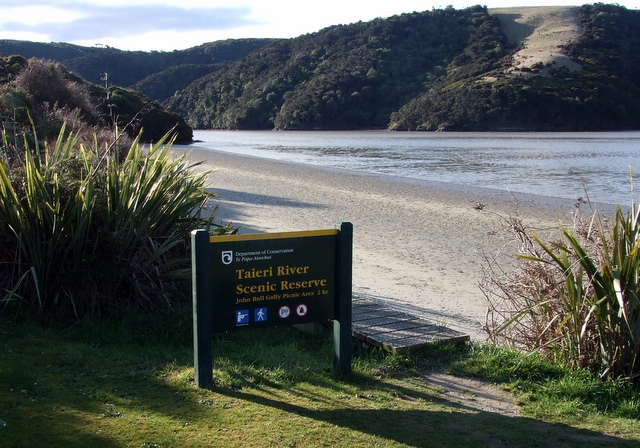 The start of the walking track up the Taieri River 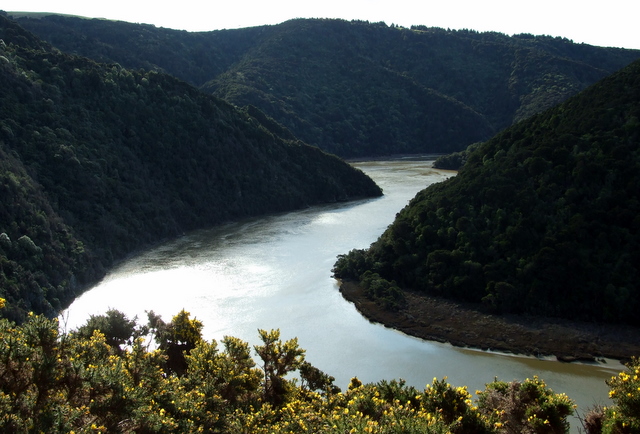 The earthquake news dominated morning tea at the motorhome rally. Some had been woken by it and some hadn’t. I realised that I had been – slightly. It seems that having a home on four big springs is very good earthquake-proofing. I guess if we’d been using our stabilisers we’d have felt it much more.

The afternoon activity was intended to be a beach clean-up but it turns out that the Taieri Mouth School already keeps the beach clean. Instead we wandered around the road-side and still collected a respectable and disappointing amount of rubbish.  Later Wyn was keen for a walk and it was a nice sunny afternoon so we made the most of it with a quick walk up the track up the Taieri River gorge. It used to be called the Millenium Track but doesn’t seem to be called that these days. Maybe it was a problem with Millenium Tracks all over the place. We were back in time for happy hour and after tea joined in with a sing-along with recycled instruments. I tried making a bugle thing out of a milk bottle without much success so we settled for a shaker and a thing for drumming.

Next morning was calm for a start but the forecast winds started to blow. We headed back to town early in the afternoon. Wyn went ahead in the car and I found her stopped up the road when her phone got back into a signal area and she got a number of messages asking where we were and were we still in Christchurch. We settled into the Leith Valley Camping Ground and got a few loads going through the washing machine. By mid-afternoon the wind was getting strong but we hung the clothes up anyway. Nothing ended up in the Leith and most of it got dry. Things did start flying around the camping ground and a passing plastic chair smashed itself and Suzi’s number plate surround. There was a lot of damage around Dunedin – mostly trees blown over. The winds that night exceeded 150 kmph on Swampy Summit at the head of Leigh Valley.

My three children came round for tea at the camping ground – it was Father’s Day and great to have with them. They bought me the DVD of John Clarke’s TV segments and we sampled a few of them.

Monday 6th was my Mum’s 91st birthday and the 2nd anniversary of the car accident which nearly derailed my son. Interestingly both passed largely unnoticed. Mind you, Mum is dead these days but my Dad never let that sort of detail stop him from remembering birthdays and I quite like the tradition. The year before we’d been driving with Andrew to Cape Reinga and the significance of the day was in all our minds even before we came upon a horrific car accident. Another year and it is just another day – almost. It’s another sign of Andrew’s progress and how life moves on. 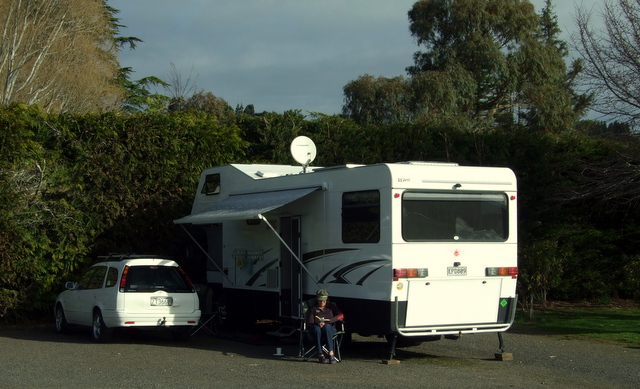 Wyn and Suzi at Wingatui 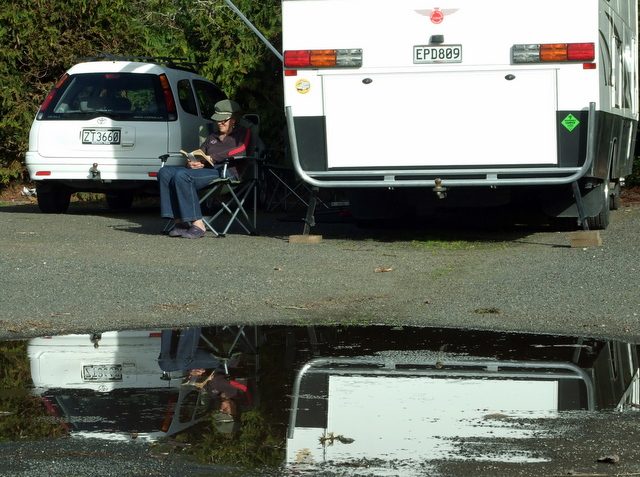 We moved out to Wingatui Racecourse where we’re allowed to park up. Tuesday was business and catch-ups in town and tea with friends. Wednesday we moved back into town back at the Leith Valley Camping Ground. We got started in the garden at Wyn’s place in Opoho on Thursday and again on Friday. Plus on Friday we moved back out to Wingatui. The cost of camping grounds adds up but we have to balance that against the cost and time travelling in and out from Wingatui. My daughter came out with us to stay for the weekend. We were back into town on Saturday morning to hang out at the Farmers Market and in the afternoon I tackled the task of transferring Wyn’s emails between laptops and from Outlook to Thunderbird. I thought it’d be a lot easier than it was.

The mission continued on Sunday. Transferring the email file wasn’t enough. Thunderbird could only get the emails out of the file if Outlook was installed on the new laptop. Which it wasn’t and if it was we’d probably still be using it. It wasn’t Thunderbird’s fault – they explained that Microsoft won’t tell anyone how Outlook stores emails presumably desperate top maintain their monopoly. Finally I installed Thunderbird onto the laptop that Outlook was on and then transferred the Thunderbird email files across to the new laptop. The address book was much simpler and by late in the night I’d even managed to install the calendar add-on for Thunderbird which looks quite nice.

Sunday was a nice warm day and Wyn was able to enjoy the day reading. She’s been engrossed in Denniston Rose and is now onto the sequel.  We took Laura home later in the afternoon and enjoyed a walk in the gathering gloom around the Ross Creek reservoir. It had been a busy week and it was nice to relax at the end of it.