Retreating from Whites Bay and the roadworkings, we occupied one of the orderly motorhome bays at the DoC camp at the north end of Rarangi Beach.  It doesn’t have a lot of ambience but it is level and it is close to the beach. The beach is a stony one, and so is the camp.  The weather for Labour Weekend was supposed to be good but somehow Saturday failed to clear so we didn’t see any sun. We managed to walk over to the beach in the morning. We got more adventurous in the afternoon and walked along the roadside to Bluegum Corner, checking out the houses and the beach on the way. 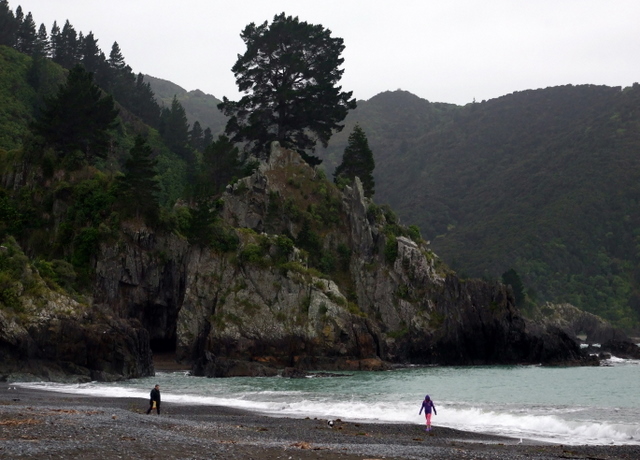 Bluegum Corner has a rock with two holes drilled through it. One is set to receive the sun at sunrise on 1 January each year. The other is set to view the summit of Mt Tapuae-o-Uenuku to the south in the Inland Kaikouras.  We couldn’t see it because the cloud was in the way. 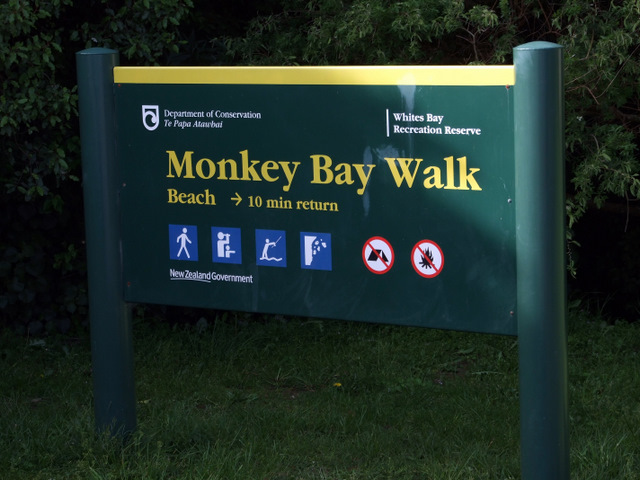 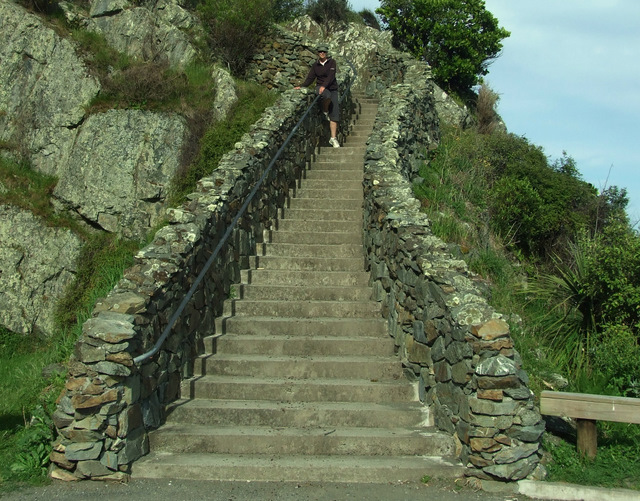 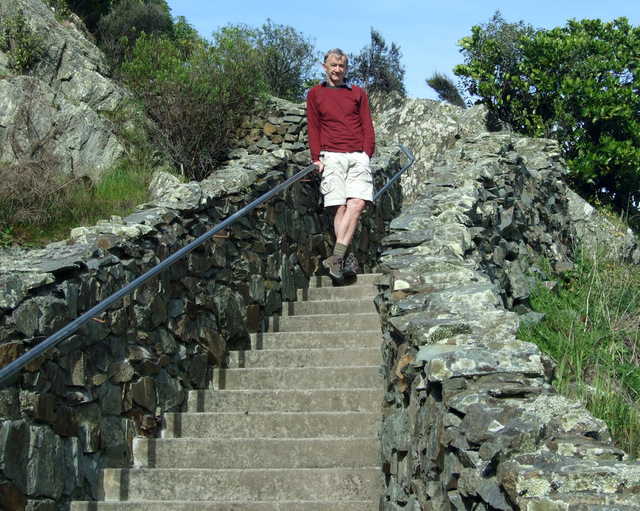 On Sunday we went back along the road to see what half a million dollars would buy on Rarangi Beach. The answer was “not a lot”. It is a good location and I guess that’s what one pays for at Rarangi Beach.  In the afternoon we walked to Monkey Beach which is a small beach just to the north of Rarangi. The track takes all of ten minutes. It is an interesting track for its massive stone stairway at the start. It looks like it’d be more at home as part of the Great Wall of China! 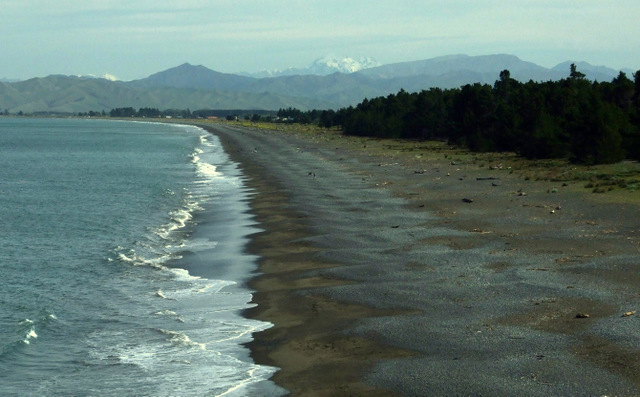 View along Rarangi Beach. The patterns in the shingle are a result of the tidal current.

On Saturday we’d discovered that Rarangi has a herd of mossies and had spent much of the evening seeking and destroying the ones that invaded our home. I thought mosquitos liked water and puddles. so, it’s hard to figure where they all come from at Rarangi. 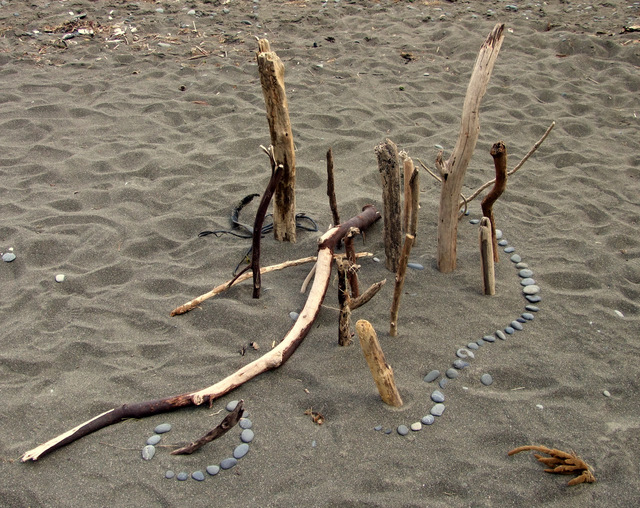 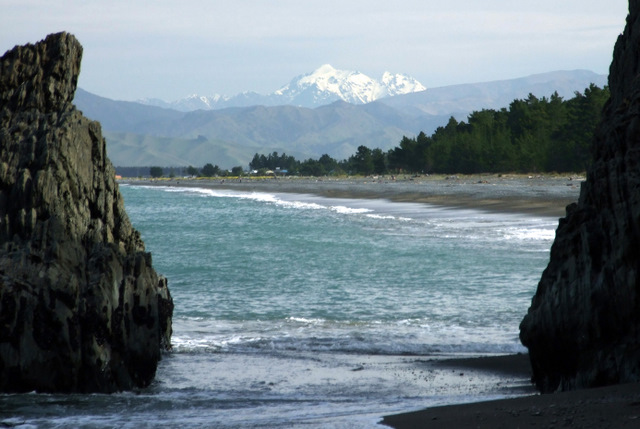 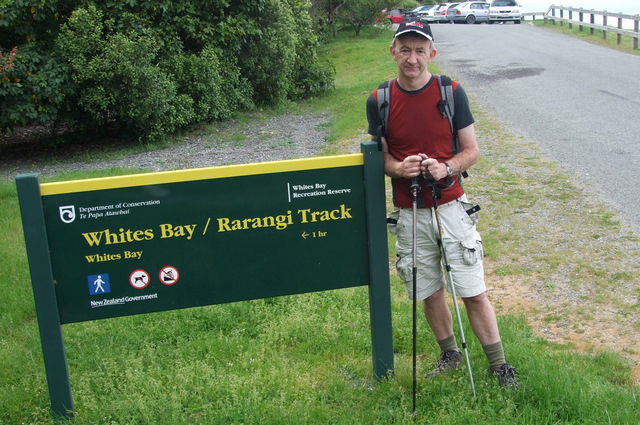 At least by Sunday the clouds cleared and we had a nice day. By Monday it was even better. It seemed that half of Blenheim was driving past heading over to Whites Bay so we decided to go look as well. There is a walking track from Rarangi that heads straight up, albeit zigging and zagging. Eventually it reaches the road which it follows past some high cliffs before dropping steeply down the Whites Bay. It’s only an hour over and if we’d driven we’d probably have had to spend an hour looking for somewhere to park. 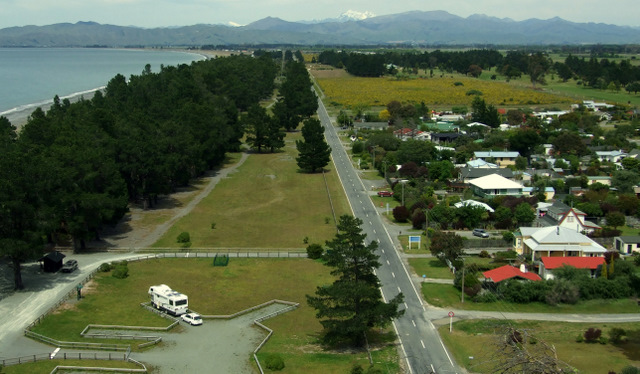 Looking over the DoC camp and along Rarangi Beach 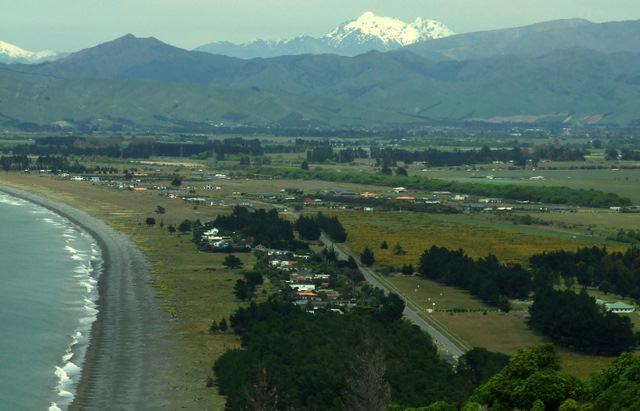 We had spectacular view south to Mt Tapuae-o-Uenuku in the inland Kaikouras. I remembered that it was 31 Labour Weekends ago that I’d climbed the mountain with the Hutt Valley Tramping Club. It had been a fine weekend that one too.  We could see another mountain to the south and I think that one was Mt Alarm. I remember traversing on to that one that morning as well, and maybe something in between. I made the traverse alone, and looking at them now I wonder what I was thinking about. It is funny to think of Mount Tapuae-o-Uenuku as also a mountain of Marlborough but it is highly visible from the area, and very prominent. 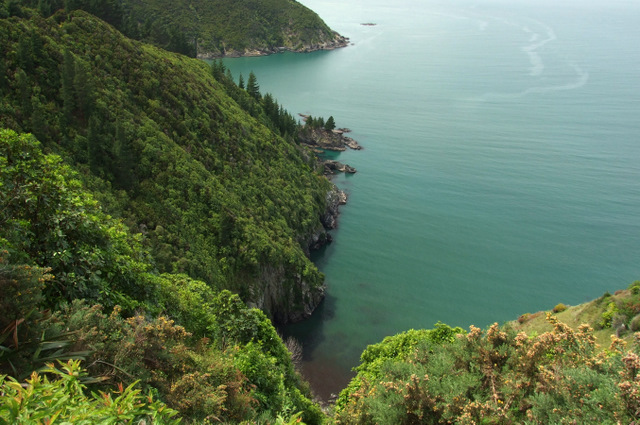 Coastline between Rarangi and Whites Bay 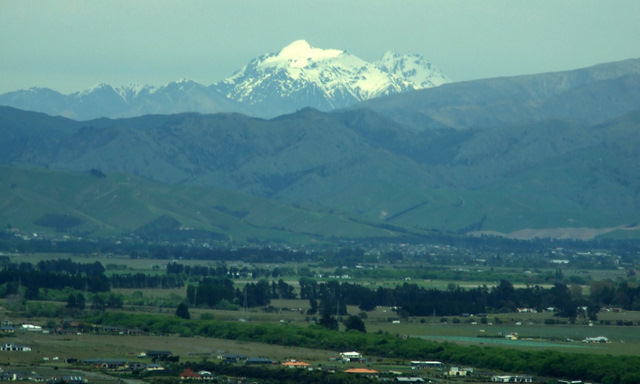 Mount Tapuae-o-Uenuku over lower Wairau Valley. I think it is Mt Alarm on the right.

Back from Whites Bay we rested up and then backed up and headed back to Blenheim, ready for some work the next day.