Sunday 21 November we woke to the sounds of the birds at Cowshed Bay near Portage on Kenepuru Sound. It looked like we’d come to the right place to relax. It was an overcast morning but warm enough. Well after breakfast we walked along the road to Portage. It is only about 400m away. There is no concession to walkers on the road – and there are frequently walkers coming to and from the Queen Charlotte Track. There is no shoulder in places and you have to be prepared to jump for your life if a vehicle comes along at the wrong places. 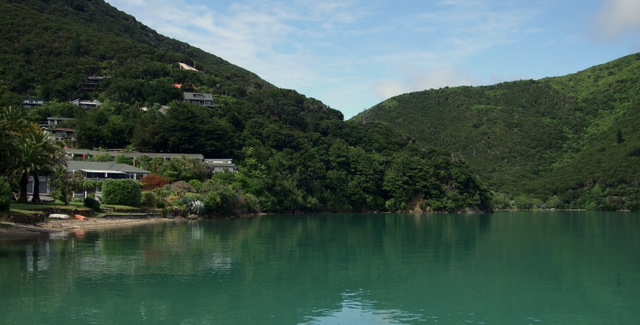 From the Portage wharf looking back into Cowshed Bay. Torea Saddle is in the dip on the skyline. 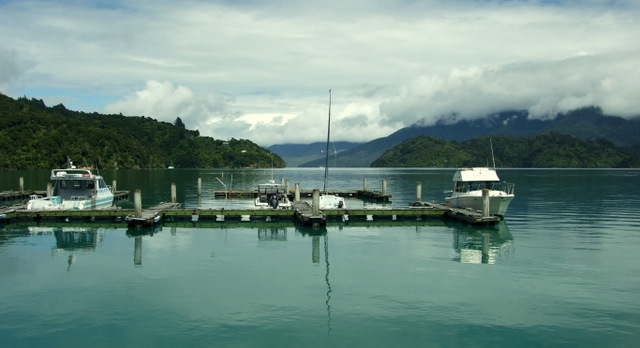 Portage is a big hotel/lodge place and a settlement of houses and cribs/baches. There is also a shop and a kayak and bike hire place. And a wharf. The cafe was closed so we explored the wharf. It was closed but open in an interesting sort of way.  By this stage the sun was shining and the water was calm and all was lovely. And the cafe opened so we enjoyed a leisurely coffee on the deck. It was fun playing tourists although I suppose we actually were tourists. All the hotel staff were very friendly and helpful which was nice. 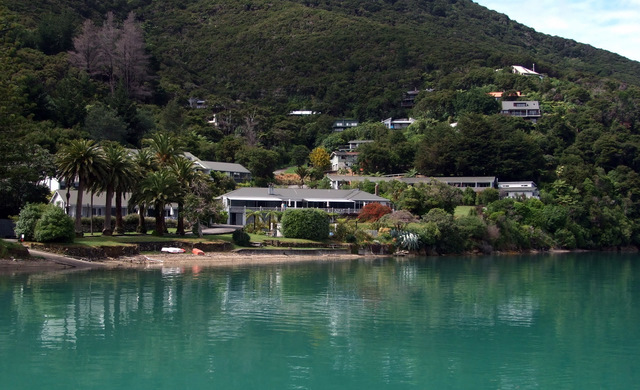 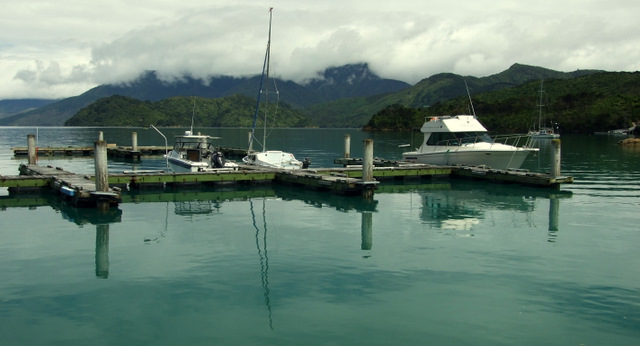 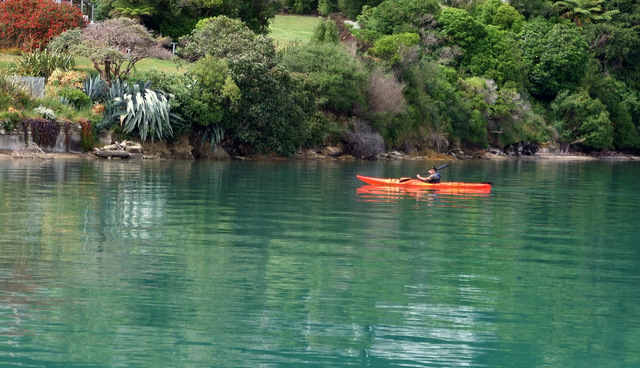 Boats moored at Portage. Private wharf in the background.

Eventually we made the Walk of Death back to Cowshed Bay for lunch. The weather clouded over in the afternoon but we headed out for a walk anyway. We took our parkas. Normally taking rain jackets would not be an unusual thing but it has been so long since we saw any proper rain that it did seem strange. We walked the Killer Road back to Portage and from there climbed the road that leads up from the hotel to Torea Saddle and thence down to Torea Bay. 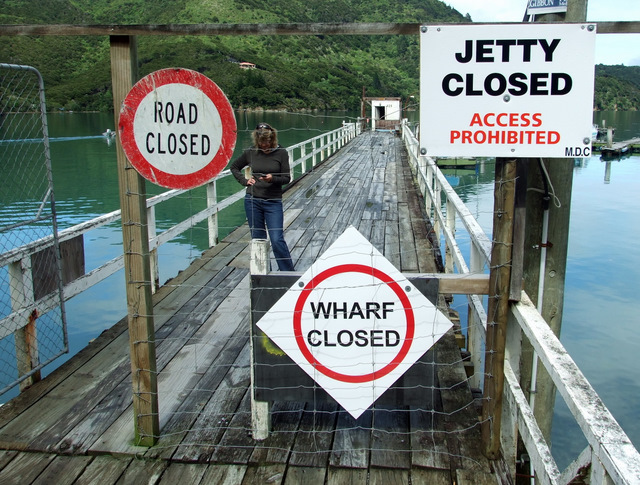 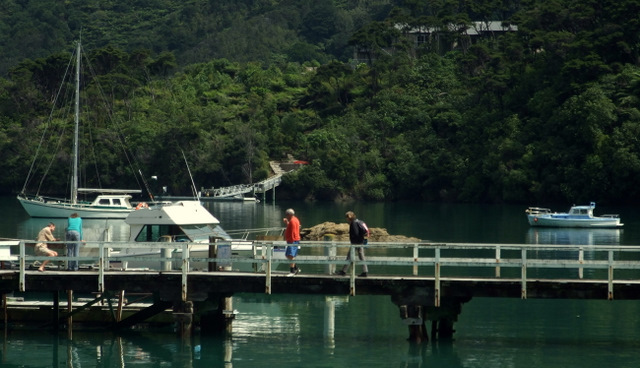 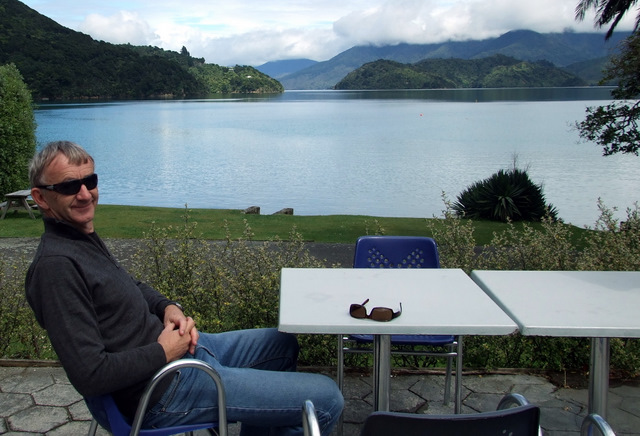 Ross waiting for his coffee at Portage Hotel 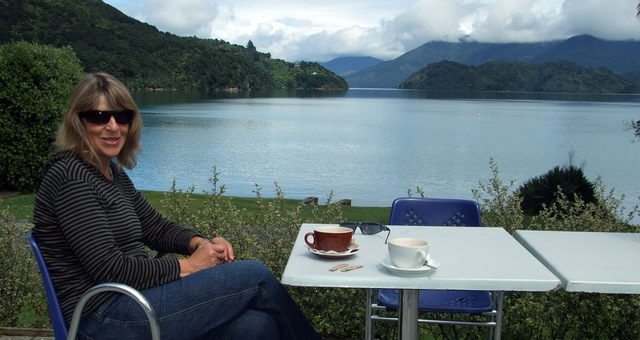 Torea Bay is in Queen Charlotte Sound and almost opposite Picton. The quickest access to some places across Kenepuru Sound from Portage is from Picton by water taxi to Torea Bay. They are then shuttled over the road/hill to Portage and then water taxied across Kenepuru Sound to their destination. I presume Portage is called Portage because in the old days some boats were carried over the saddle for use on the other sound. Or maybe it was just the people who were carried over? 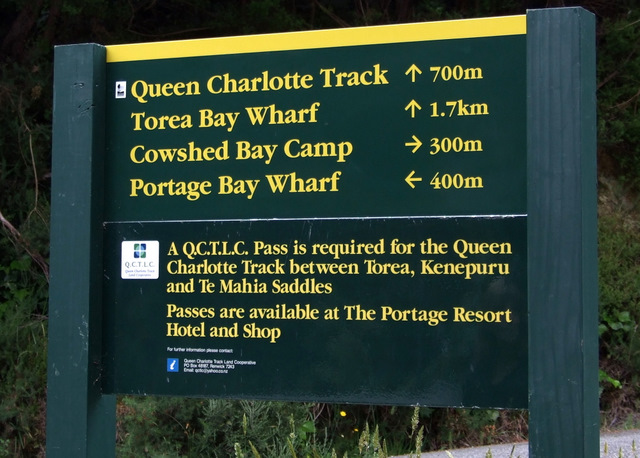 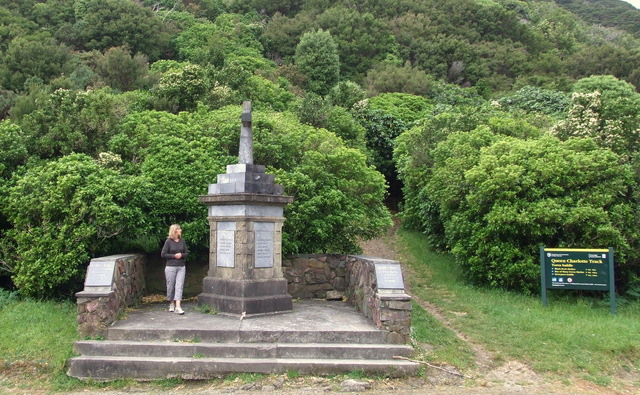 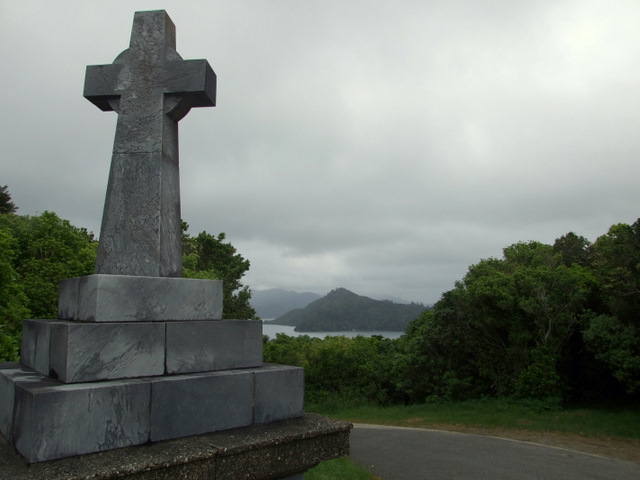 It was  only a ten minute climb to the saddle. The Queen Charlotte walking track follows the ridge between the two sounds and crosses the saddle and the road. There is also a striking war memorial there which probably shows some of the historical significance of the location. By the time we followed the road down to the wharf at Torea Bay the mist had turned to drizzle and the breeze had turned into a wind. We donned our parkas and huddled in the shelter of the wharf shed to watch the departure of a family headed off in their large boat. Heading back up the the hill we made up a family scenario for the people we’d seen. Am I the only person who does this sort of thing? 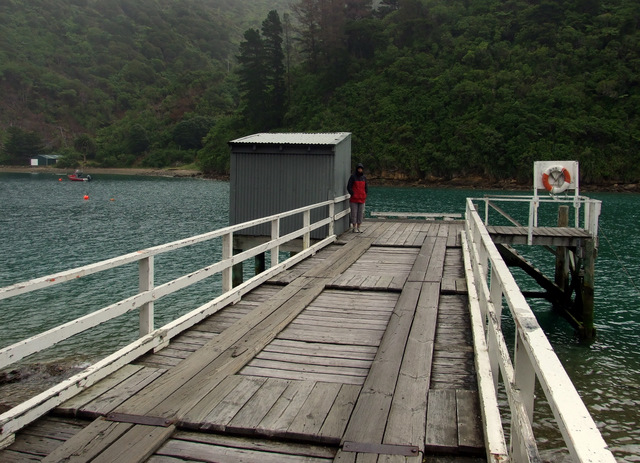 It was warmer and drier over the Kenepuru Sound side of the saddle. Once more we survived the road walk back to Cowshed Bay. There were several track walkers in residence for the night, one with a car. The camp had some resident ducks who quacked around displaying some of the terrible behaviour of ducks. Plus there was a bold weka who pecked around everywhere. There were a couple of flare-ups when the car owner discovered the weka inside his vehicle. At one stage he chased it out one door only for it to disappear in another.

2 Responses to Pottering Around Portage