We guessed we had another week “on the run” before work would start. So we headed north on Saturday 17 March to visit some of the Auckland Regional Parks on the coast. There are a couple of dozen of these parks, mostly by the sea in great locations. Auckland gets a lot of criticism from non-Aucklanders. But the chain of public parks around the region should be the envy of all of us. They are wonderful and we’re enjoying discovering more and more of them. Some have camping areas and at some we’re allowed to stay for a night or two in the carparks. As self-contained motorhomers we’re allowed to get an annual pass and we’re making good use of ours this year.

On the way north, we exited the motorway at Albany to find an awkward roadside dump station. Auckland has more regional parks than it has dump stations. Most people will think that this is good. But it does make it more difficult to get rid of our motorhome liquid waste.  And this one at Albany was tricky for us being on a busy roadside and downhill when our waste outlet is at the rear of our tanks. It’s hard to find the perfect city.

We continued north and used the toll road north of Orewa. We hadn’t hitched up the car so we had to pay for both, something like $2.20 for the car and $4.40 for the truck. It’s fun through – there’s a swoopy viaduct and tunnels at the far end. Motorway extensions are good as far as they go, literally. But then you’d dumped onto bad old SH1 at Puhoi so the congestion is just moved a bit further north. As luck would have it, we were turning off at about that point and we headed east to the sea at Mahurangi. The short road from SH1 traverses a ridge and finally descends to the coast. There are some expensive houses along the ridge with fabulous views. Not a bad place to live, only a few minutes off the end of the motorway.

We parked up in a grassed car park, a short chip shot back from the beach. It’s still Hauraki Gulf off here. The evening was windy and clear so we took the opportunity to walk up to a lookout, with views up the Mahurangi Harbour to Warkworth and across to Mahurangi East Regional Park which would be a long drive around through Warkworth and Snells Beach. 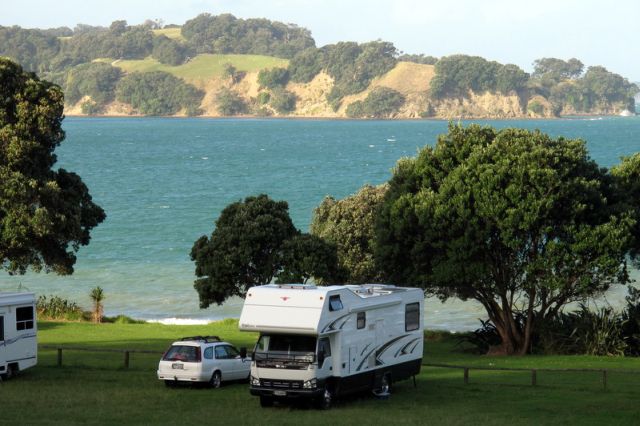 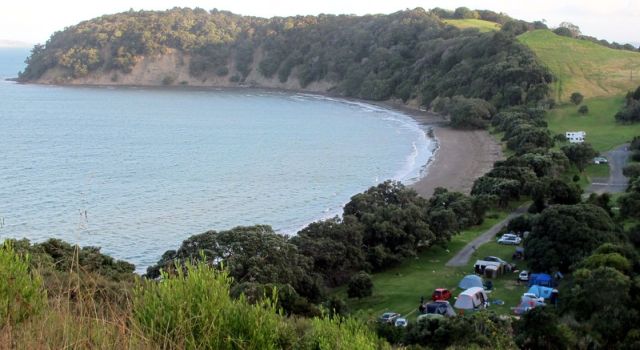 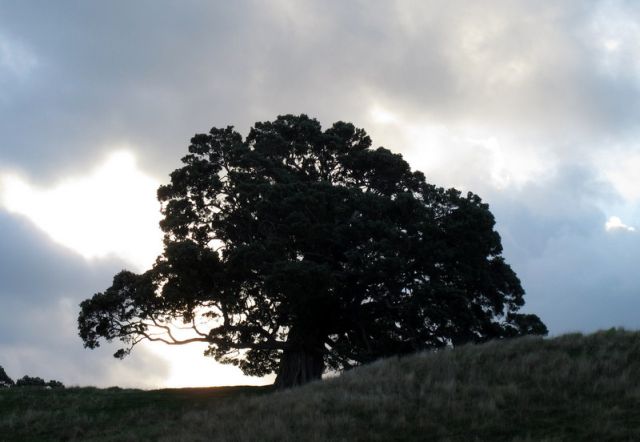 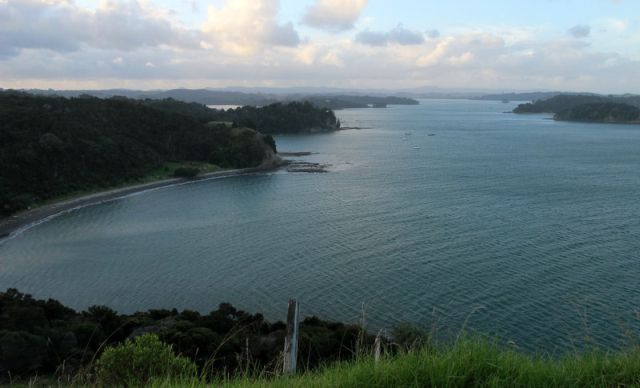 Sunday morning was still windy and the ranger called by with warnings of plagues and pestilences aka wind and rain aka Auckland’s summer. We took advantage of the absence of rain in the morning to walk to the bay to the south – Te Muri Beach – where there is a historic cemetery. Something said 130 people were buried there so it speaks of a different past. 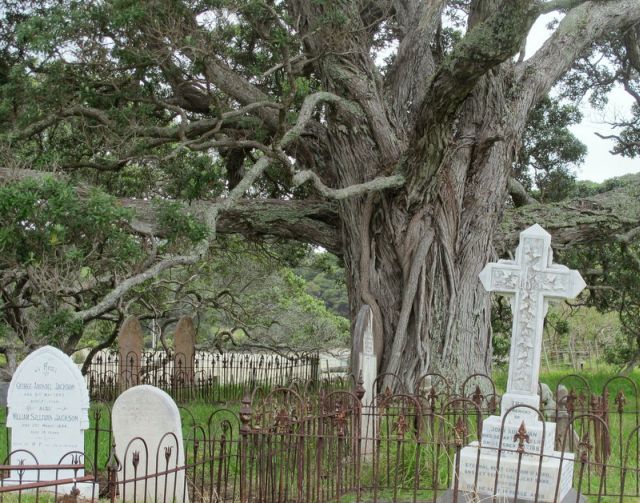 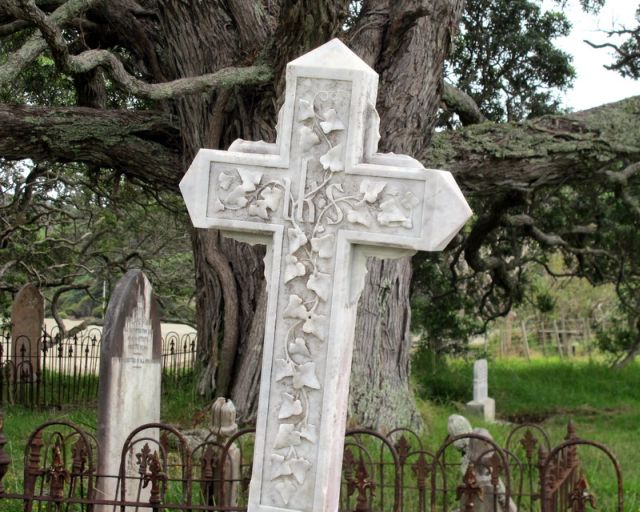 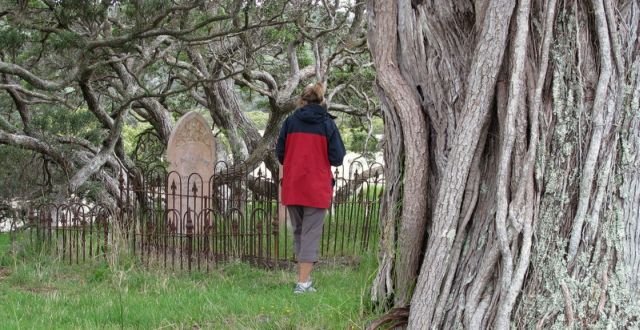 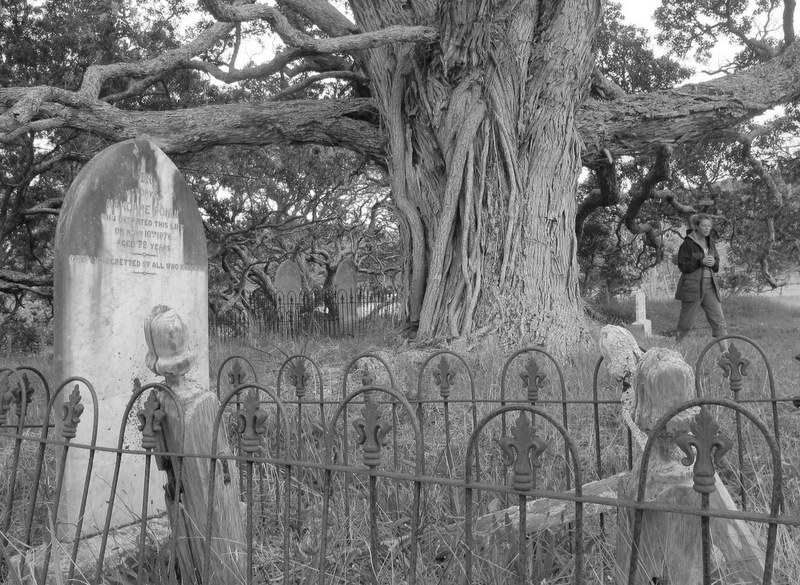 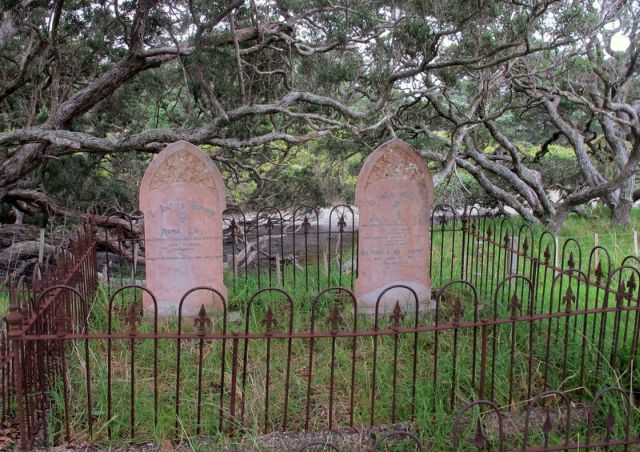 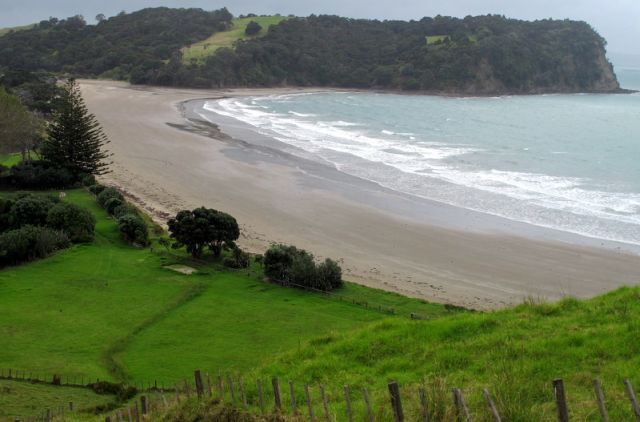 Once the campground emptied of the many family groups making the most of the weekend, we moved Suzi into the camping area – also beachside.  Wyn did our washing and I started a late spring clean of Suzi’s drawers. I made good progress on “my” drawer and moved on to the computer drawer aka The Snakepit with all its cords and entanglements. The rain finally arrived in the evening.

It rained all night and the park was sodden next morning. But being mostly sand underneath we had no trouble moving out. Wyn did comment that Suzi’s wheels pushed an impressive bow wave ahead as she squished the sodden ground. We headed south a short distance to Wenderholm Regional Park and parked up in the car park area – also sodden and mostly deserted. There was two bendy-busloads of school kids. Probably the kids should have been out roaming the park but also probably they shouldn’t have left the school with that sort of forecast. So their day was sped doing whatever on the huge buses. How much fun can teachers have?

It stopped raining in the afternoon so we went shopping in Orewa, not far south. But by the time we got back to Wenderholm it was wet and windy again although we were sheltered from a lot of the wind being well back from the beach. In the evening we took advantage of the Waiwera hot thermal pools, about 1km south from Wenderholm. The night was stormy but the water was hot. I was intrigued by “Lava Pool” which flowed into our pool. This was a quiet area off-limits to kids. Nevertheless the sign on the Lava Pool that advised caution with the 47 degree water intrigued me. What’s that all about? Why have a pool at 47 degrees? One person did manage to get in and sit in, apparently immune to the high temperature. But the rest dipped a toe and exclaimed. The information on the interweb suggests immersion in water above 41 degrees is not a good idea.

The rain finally let up next day and we headed back to Albany to visit Wyn’s cousin and that afternoon we parked up at Long Bay Regional Park just north of Torbay. It’s another great beach park. This one is the northern-most beach in the urban area of the North Shore. We enjoyed a walk along the beach and along the cliff-tops to the north. We were intrigued by massive earthworks. It might have been a new motorway or an open-cast mine. But it turned out it is a massive sub-division. 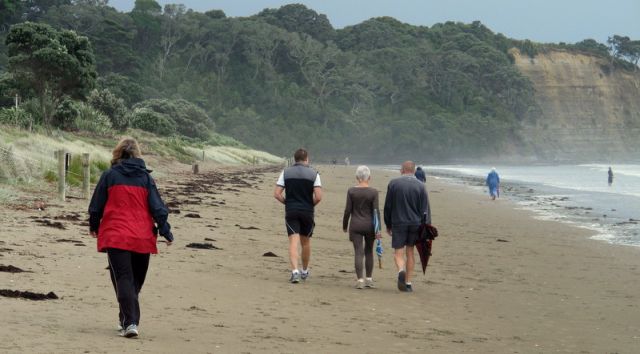 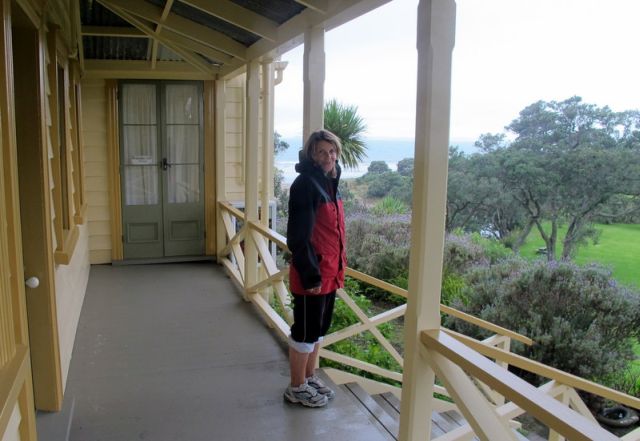 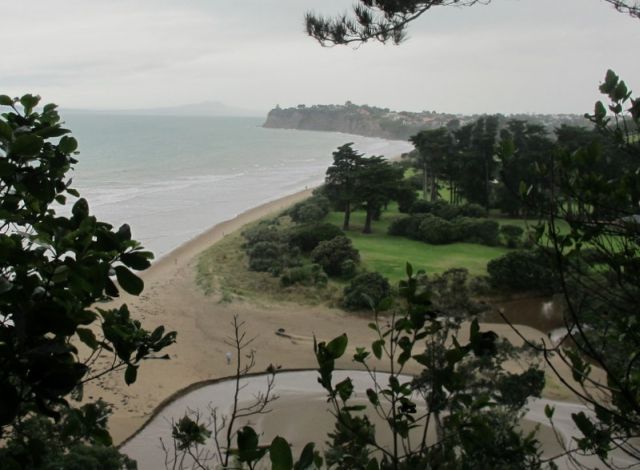 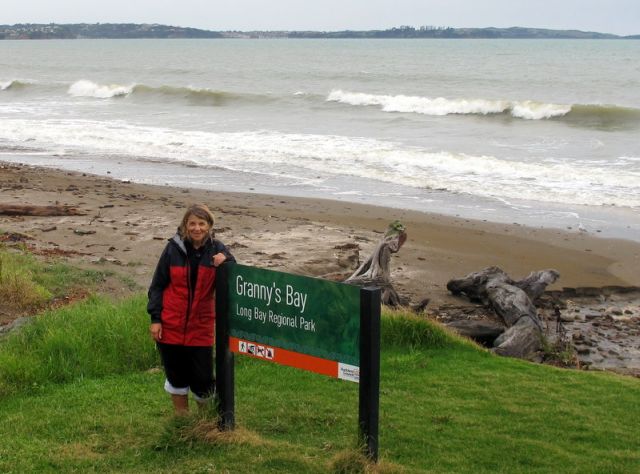 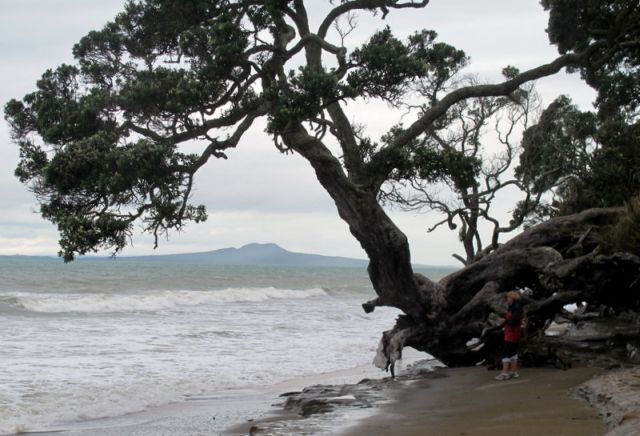 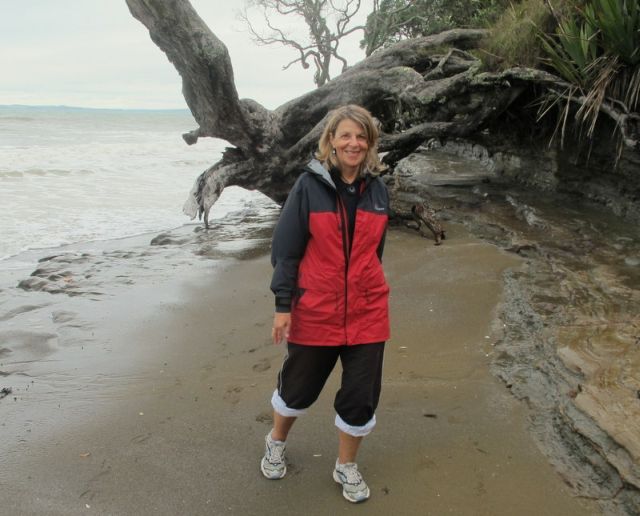 We were interested next morning with the school children using the windswept beach for a range of water activities. Wyn discovered the Sir Peter Blake Marine Education and Recreation Centre at the end of the beach, which explained the activity. Imagine being taught surfing in school! 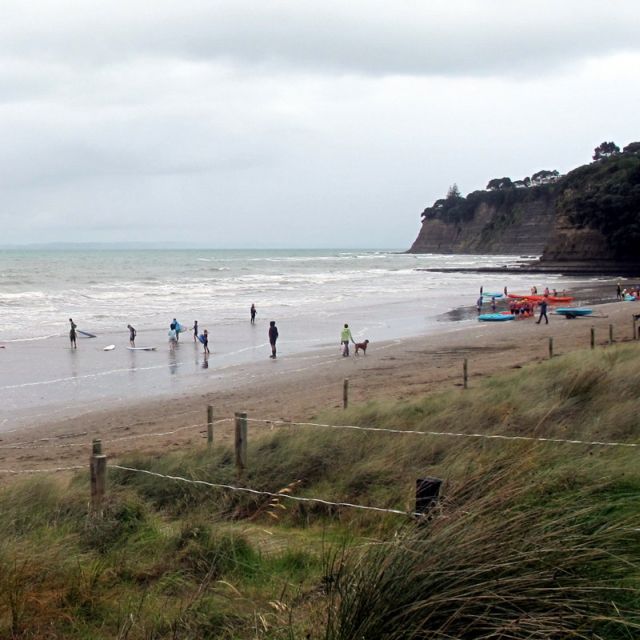 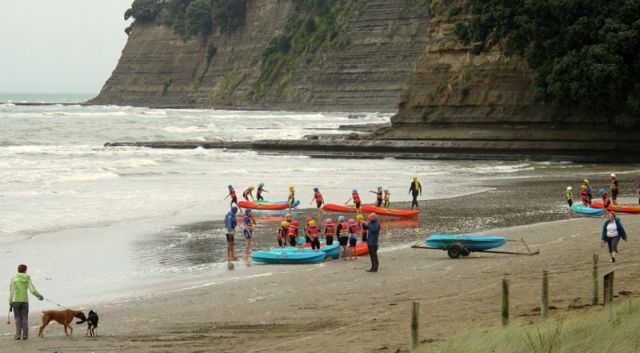 The rain started again late morning as we headed back south to our home-away-from-home Ambury Park. The rain got heavier through the afternoon and formed big pools in the camping area. It really had been a long storm. Thursday it finally stopped and we saw blue sky and sun. It seemed to have been a while.

This entry was posted in Daily log and tagged Auckland. Bookmark the permalink.