The main road from Tauranga to Auckland  heads north west around Tauranga Harbour before heading inland at Waihi. The Karangahake Gorge provides a stunning low-level gap between the Kaimai Range to the south west and the Coromandel Ranges to the north. Paeroa is the town on the other side, and from there it’s all flat farmland. Gold was mined at both ends of the Gorge, and very intensively. The gorge must have been a significant obstacle but roads and railways were carved out and mines were mined all over the place. At the Paeroa end there were numerous mines and stamping batteries, and a remnant provides the Windows Walk, a stunning hours long walk through some spectacular geography. At the Waihi end was the Victoria Battery where gold from Waihi was processed on a massive scale.

We had made the drive through the gorge several times over the last few years, and done the Windows Walk the first autumn we stayed in the Bay of Plenty. We were aware there was a track on the other side of the river for walking or cycling, and it was one of those things we never seemed to get around to. So this year we vowed that as soon as we got the chance, we’d get on our bikes. 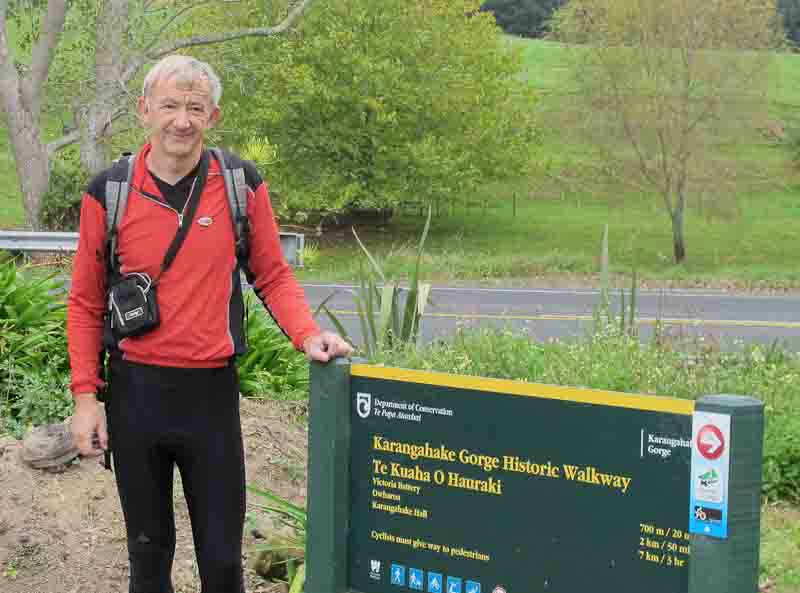 Ross at the start of the cycle/walk track

Knowing that we wouldn’t be working Anzac Day, we headed off on 24 April after a bit of a sleep after night shift finished at 3.30am. The trail starts at Waikino Station where the rail line from Waihi ends. There is a tourist train that still uses the line. From there the trail follows the old rail line – so it’s wide and mostly flat. It passes the old Victoria Battery site, and interpretation boards give some idea of the former scale of the operation. 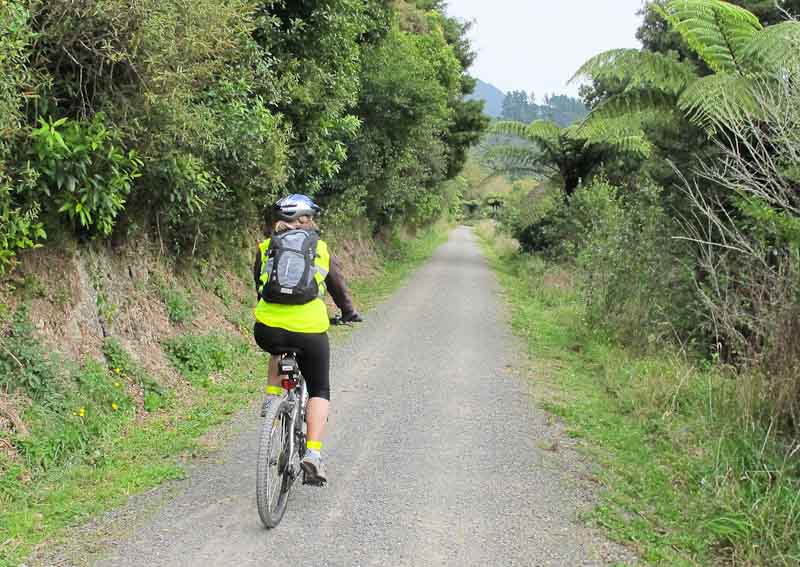 Wyn and the cycleway 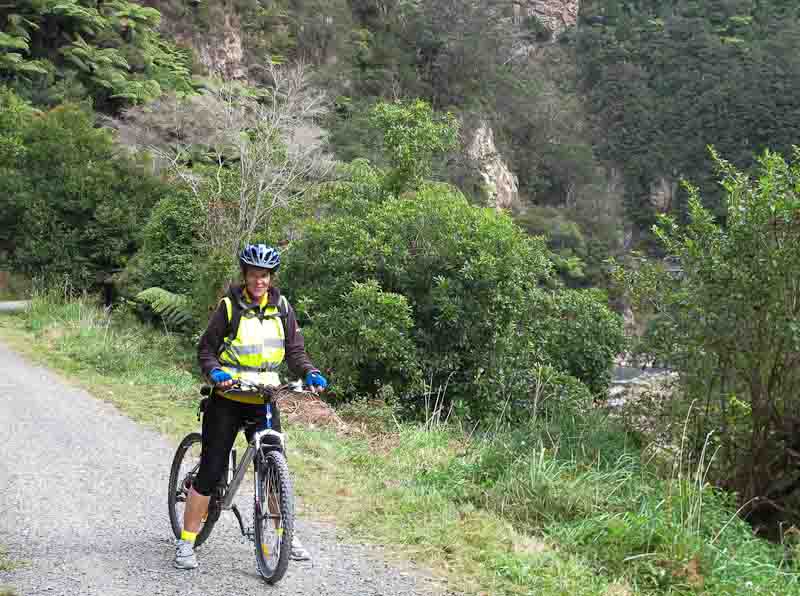 The trail then continues through the gorge, on the opposite side to the busy road.

Eventually it crosses the river and then tunnels under the road and over 1km straight through the hill to emerge at the top end of the gorge – only about 40 minutes after we started.

Across the river, under the road and through the hill – how much fun can you have on a bike? 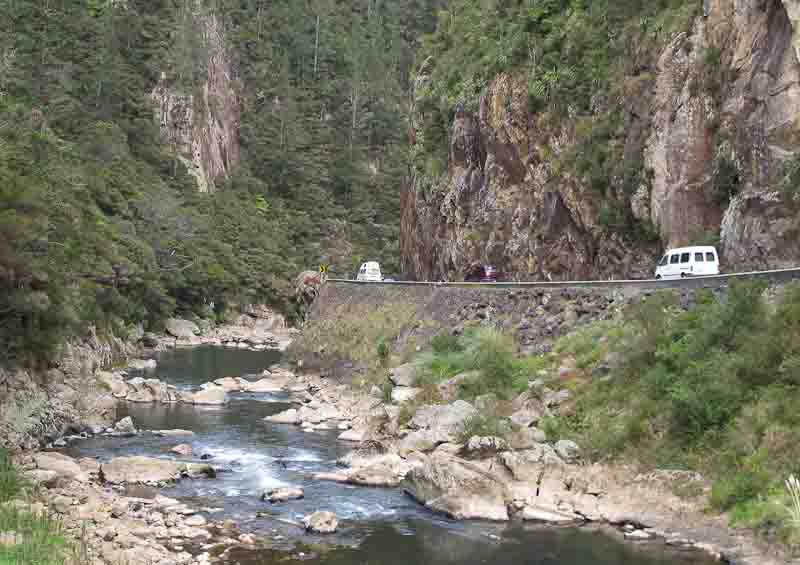 It’s an interesting drive through the Karangahake Gorge 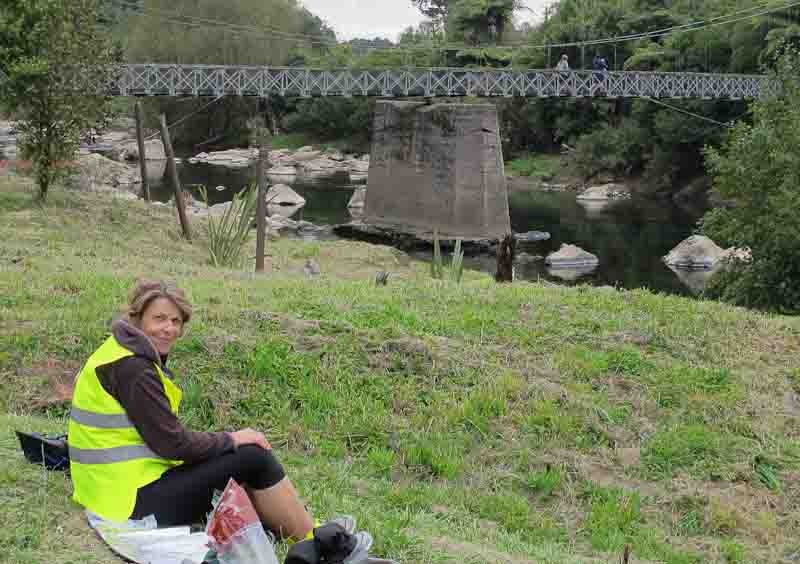 Lunch at the top (or bottom) of the Karangahake Gorge

We enjoyed lunch amidst the remains of some of the gold processing works before retracing our path. We explored a side track to an old quarry and waterfall. 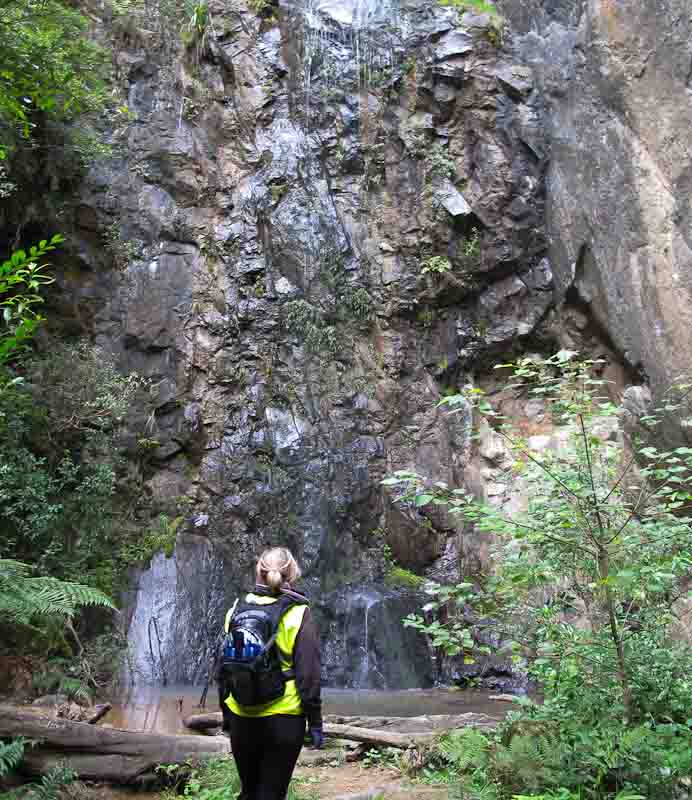 Waterfall with not much water – maybe a tricklefall?

There is a nice café at the Waikino Station but we were put off by the unfriendly nature of the signs all around e.g. there was one in the toilets at the station reminding train patrons that the toilets were provided for café patrons and they were expected to pay for their use.

So we took ourselves off to the lovely Banana Pepper cafe in Waihi – always a welcoming place with good food reasonably priced. On our way back to Te Puke we stopped off at the Onion Man vegetable road-side stall just out of Katikati. We used to patronise it heavily when we were working just along the road in 2009. It is still as good as ever – local food at local prices. It was a good way to end a good day.

This entry was posted in Biking - cycling, Daily log and tagged Bay of Plenty, biking. Bookmark the permalink.