Photo of the Day #3 (Margaret Burn)

This is a photo from a tramping trip many years ago, almost 40 years ago to be imprecise.  We were attempting to reach the Olivine Ice Plateau from the Dart Valley, via the Margaret Burn. The Margaret Burn drains the Barrier Range which isn’t called that for nothing. Having hauled ourselves up the side of the Dart Valley, we got bogged down by a lengthy Nor-West storm. After a night in a damp tent we discovered an overhanging rock which with improvement became home for several more nights.

During one semi-clearance, Ken Blackwood ventured out to erect a rock cairn on a nearby outcrop. I recorded the event from the comfort of my sleeping bag. Far below him is the Dart Valley and the Dart River.This photo is from a scanned transparency. It was probably taken with my old Paxette Braun Electromatic. It was a colour photo without much colour so I’ve made it into a black and white one.

Ken was a well-traveled man. He’d been to South America and had the hat to prove it. He was the most inventive man I’ve met. He’d built his own aluminium ice-axe. Which we’d buckled while using it to clear the aforementioned tent site, suggesting it needed more work. He’d built his own cooking stove, based on parts from the ubiquitous Optimus 8R. His rebuild addressed three of the major shortcomings of that stove but it also leaked flames from several joints. None of us went close to it. Five years later MSR brought out a stove very similar which didn’t leak flames which became the new standard.

These were the uncomfortable days before close-cell foam sleeping mats. Ken had invented a book sleeping mat. He’d glued strategically spaced paperbacks between two layers of heavy plastic. During the storm he’d slice out a book and read a chapter before tearing it off the book and passing it on to the next person in the tent/bivouac. Gradually we read the contents of his sleeping mat while the storm blew on.

We didn’t get through the Barrier Range or reach the Olivines that summer but it was a memorable failure. 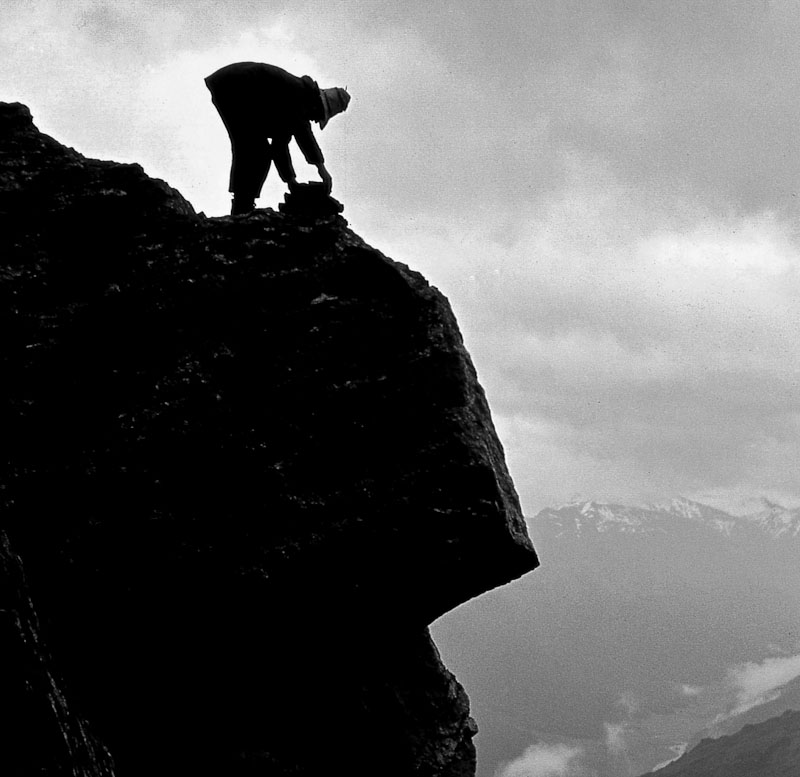