Photo of the Day #4a (Green Hut Revisited)

There was some doubt about my first picture of Green Hut in Photo of the Day #4 (Green Hut). Sister Wendy thought the chimney was on the other end. In denial, I suggested maybe the chimney got repositioned in the later stages of the decomposing hut. Wendy also wasn’t sure that it was her in the photo. Friend Richard was a little more sure. He was positive that it is Green Hut but the photo had been flipped. So I thought I better unflip it and repost it. So that Green Hut isn’t remembered the wrong way.

I guess this happened when the transparency got scanned. And when you look at it it is a kind of a push-me-pull-you kind of hut. Looks the same coming or going. Or that’s my defense anyway.

Richard agrees that it is Wendy in the picture. And he worries that I might have made Ralph’s hair a bit more ginger than he remembers it. Whatever happened to artistic license? And that maybe the hill behind the hut called Green Hill was named before the hut and that perhaps the hut was painted green so the hut could be called Green Hut to match the hill. Makes your head spin eh?

Sister Alaine has mentioned a hut somewhere in Central (Old Woman Range maybe) called Red Hut or Green Hut since that was the colour. And now they’ve changed the colour of it. She hasn’t said if they’ve changed the name accordingly. I wonder if it’s sillier to change a hut name because it got painted a different colour, or to leave it the same and have a hut called Red Hut that is green?

Richard thinks the photo was probably taken in 1976-77. I’d thought earlier but then I thought the hut was the other way around so there went my credibility.

Spot how many Karrimor Joe Brown packs there are there. Ahhh, the old Joe Browns were the height of sophistication and cool. They weren’t mountain Mules for one thing, and didn’t stuff your back for another. I finally let mine go a couple of years ago – it was a kindness. I’ve since inherited one that’s hardly been used. The other thing is, nobody these days understands how cool they are. and because it’s so pristine, I don’t look like some wise man of the mountains any more. Just another old codger with a weird pack – sort of an outdoor equivalent of a MG car owner.

Anyway I liked the photo the wrong way round. It worked better as a photo. Is it wrong to let truth get in the way of the right angle? 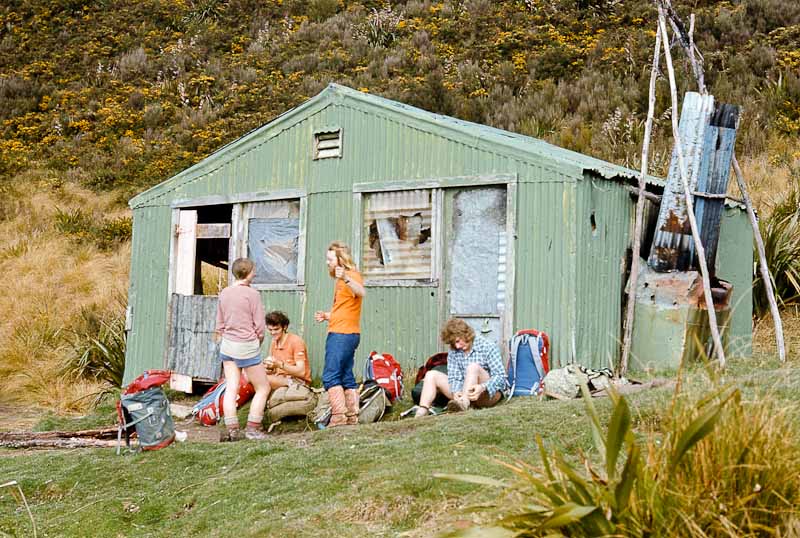 Green Hut in the Silverpeaks near Dunedin, flipped so that it is the right way around.

This entry was posted in Photo of the Day, Photography, Tramping and Climbing in 1970s and tagged Tramping & Mountaineering. Bookmark the permalink.