The Christmas after the Barrier Range stopped us getting to the Olivines (1973?), a more determined push via the Rockburn and Olivine rivers saw us at Forgotten River. Which is a river you don’t forget. [Once when the ODHB had a river theme for naming servers, I got an obscure back-room one named Forgotten. I wonder what became of it?]

Anyway a group of 8 of us made it to the Olivine Ice Plateau with more food than we could carry at once – we’d had a whole lot of stuff flown in. We’d spent a few days under a big rock in a big storm, before spending an afternoon ferrying a load of food up to the Olivine Ice Plateau. The ice plateau is a huge expanse of mostly flat snow and ice, ringed by mountains. One chink in the wall was called Forgotten River Col which is a big climb from the Forgotten River with no drop on the other side, just miles of ice plateau.

So we ferried loads up and stashed them somewhere, before heading back through the col and descending back to our bivy under the big rock. Next day we’d climb back up again and build a shelter in the snow near the col and live in it for the next 5 days. It’s how people survive storms on the Olivine Ice Plateau.

The Olivine Ice Plateau is about as far as your can get from anywhere in the alpine environment of the South Island. If you imagine the wilderness between Fiordland, Mt Aspiring and Westland National Parks, then that’s where it is. That summer was a golden one for the Otago Tramping and Mountaineering Club. At one stage there was over twenty of us on the ice plateau. I doubt there has been a club grouping like it before or since.

This photo is one taken while trudging back from the plateau, through Forgotten River Col – heading back down to the rock bivy. It was later in the afternoon and the snow was getting soft. The mountain ahead is something like Mt McClintock? The three in front of me are my sister Julia, Mike Doig and Russell George.

It was originally a black and white photo, taken on my old grandfather’s Zeiss Icon bellows camera. The light meter was bigger than most compact cameras these days. The negatives were 2 1/4″ X 3 1/4″, about 4 times the size of a 35mm negative. The bellows leaked light but usually I ended up with an area in the middle of the negative that was still bigger than a 35mm negative. At some stage (2002?) I must have digitised the negative and played with it. Whatever  I was using had a sepia toning which I’ve used lightly. And also an option to give a photo a watercolour appearance. I always liked the two effects on this photo – I think I managed to restrain myself to not overdo either. 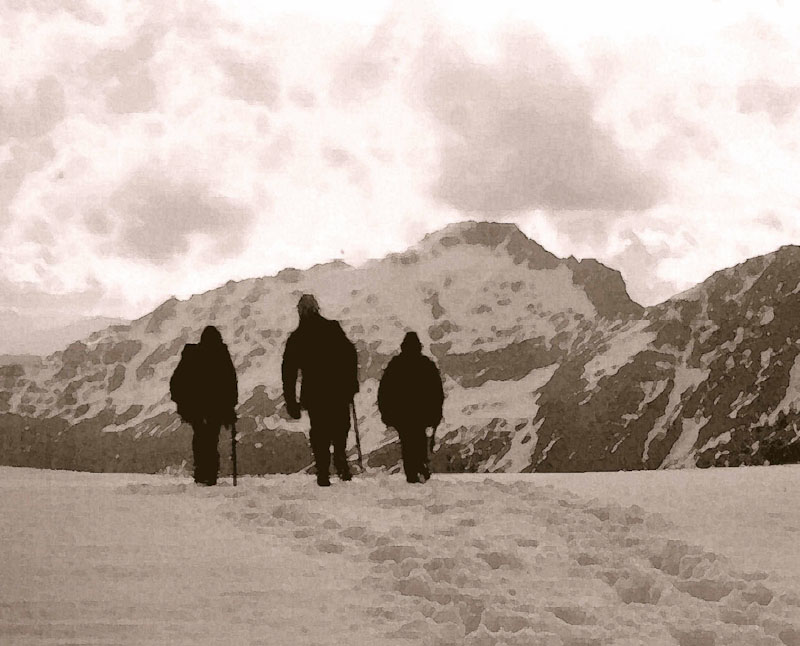 This entry was posted in Photo of the Day, Photography, Tramping and Climbing in 1970s and tagged Tramping & Mountaineering. Bookmark the permalink.

2 Responses to Photo of the Day #5 (Forgotten River Col)