I’ve always liked this photo. For me it somehow captures the time and place. Mid 1970s. Out back up north in West Australia. Specifically the Theiss Bros maintenance yard at Mt Tom Price, adjacent to the open-cast iron ore mine. Theiss Bros had a contract to move a large pile of ‘dirt’ to make way for something else. They had a dozen 75-tonne dump trucks and a couple of diggers, working around the clock, for several years. Like I said, it was a big pile.

The trucks were always blowing things or breaking down or wearing out. There was a team of fitters (diesel mechanics) also working around the clock trying to keep the vehicles on the road.  The boss offered to shout for the whole team if ever they got all 12 trucks on the job together. This was a low-risk offer. The most out of the yard and on the road was 9 trucks.

I took my camera to work one night and got some photos in the last light of the day. There was a big shed but this was mostly used for jobs that needed welding. (There didn’t seem to be much that couldn’t be fixed with a gas torch and/or a really big hammer.) Most of the work was out in the yard, in the dust and dirt. The photo shows a couple of the fitters in front of the prehistoric water tanker which should  have been out on the haul roads trying to keep the dust down. The puddles are not water, they will be diesel.

It was a life of diesel and dust. And fun. It was a good bunch of men to work with. Everyone was a long way from somewhere. We were an interesting assortment. I was green as green but nobody made anything of that. We were there to make money and try to keep our sanity so we could keep making money. It was a great group of men (and boys). 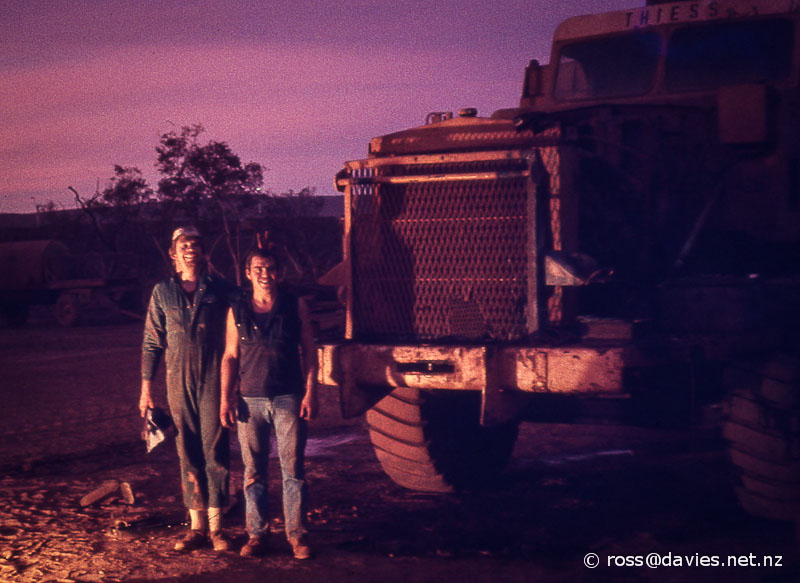 I loved the little film camera that I took this photo with – my Yashica MG-1. This was a great wee camera, although by today’s standards it would be seen as big. Leaving New Zealand I bought duty-free a nice Minolta Hi Matic which I promptly lost on the bus in from the airport at Sydney. On my way to the bus station leaving Sydney I walked past a camera shop and bought a second-hand Olympus Trip camera – not a lot to go wrong with them. In Melbourne’s lovely Botanical Gardens on an overcast morning at 10am the Olympus Trip refused to take a photo because it didn’t have enough light. It’s days were then numbered.

Once I’d made a bit of money at Tom Price, I marched in to the shop and bought a shiny black Yashica MG-1. I’d checked it out somehow – and I’m not sure how we did that before the interweb. I knew Yashica were world-leaders in electronic exposure control, and I was sure it would keep going in low-light conditions. And it did. It could time itself automatically to several seconds, and it did, brilliantly. The photo above was taken on Auto. Is it wrong to love cameras?

This entry was posted in Nostalgia 1970s and 80s, Photo of the Day, Photography and tagged Australia, cameras, Mt Tom Price. Bookmark the permalink.