This is the last part of my 1970s nostalgia saga of dust and diesel. I’d flown north from Perth to Tom Price and been impressed by how long it took the jet to get there. It was a long way north, that was obvious. I had a job working in the Wet Mess at the Single Man’s Camp. This was a big steel shed that dispensed beer as fast as possible at the end of each day. The boss was kind and tolerant of my ignorance, but eventually suggested my future wasn’t as a barman. He thought I didn’t drink enough to understand drinkers.

I started chatting up men in the bar, asking about possible work. Some of the Theiss Bros guys thought there might be something going at their yard, and introduced me to the boss. He looked me up and down, literally, and offered me a job as a TA – Trades Assistant. To the Fitters, so I guess I was a Fitter’s Assistant. If asked, I’d have confessed I had no idea what fitters do, and couldn’t even change the oil in my car. But it didn’t seem important. So I had a real job, and real money.

The photo shows a couple of the fitters doing what I mostly did. Swinging on tyre spanners to loosen the nuts and get the wheels off. There was a big spanner part. And then a huge length of pipe to put on the end to get much more leverage. Sometimes I’d climb up along the pipe and jump up and down to crack the nuts. When I succeeded the bar would crash to the ground, followed slightly later by me. And then the next. It was fun. It was my job. And that was why the boss had been eyeing me up and down. He was making sure I was big enough.

I jacked the trucks up with a simple big jack. And helped get the wheels off with the crane driver/tyre fitter. And back on again. And anything else the fitters  needed. I was their gopher. I cleaned engine parts and water blasted things that needed water blasting. I was happy and making lots of money. I got filthy every day. And every time for the rest of my life when I smell diesel I’m transported back to that maintenance yard. How does that work? 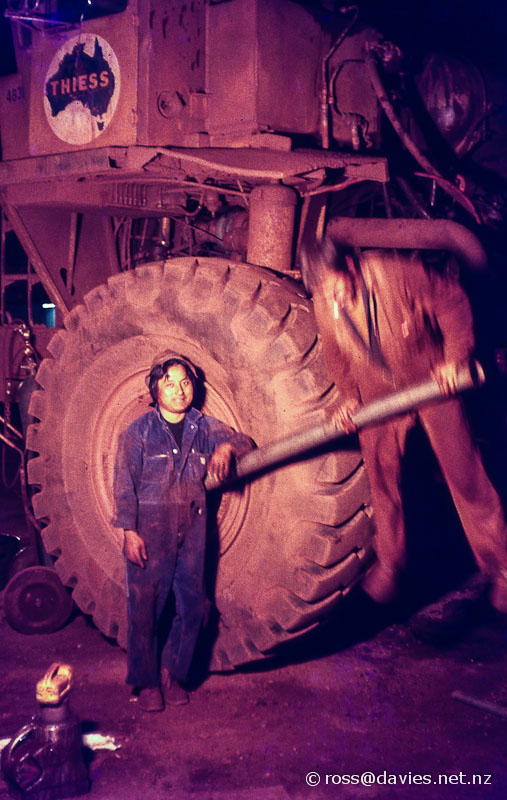 This entry was posted in Nostalgia 1970s and 80s, Photo of the Day and tagged Australia, Mt Tom Price. Bookmark the permalink.