A Big Day Out in Big Shanghai

Our first full day in China didn’t start so well, and then ended a little bizarrely. But mostly it was amazing; an eye-opener – Shanghai is a modern city with lots of surprises. We had a bit of a loose plan to see the Bund and the Pudong high-rise buildings. The forecast was for better weather than the following day so we wanted to make the most of it. We headed out early to the Metro and were soon “downtown” at East Nanjing Road.

We came up from the Metro and I navigated us towards the river and The Bund, one of the focal points of Shanghai. We were soon on a huge pedestrian street with not too many pedestrians at that time of the morning. The big shops don’t tend to open until 10am.

There were lots of groups of older women (and some men) doing their morning exercises. There was Tai Chi, martial arts, line dancing and even ballroom dancing. Down the far end of the street was a great landmark building. I called it the cattle prod but we’ve realised that it better resembles a taser. 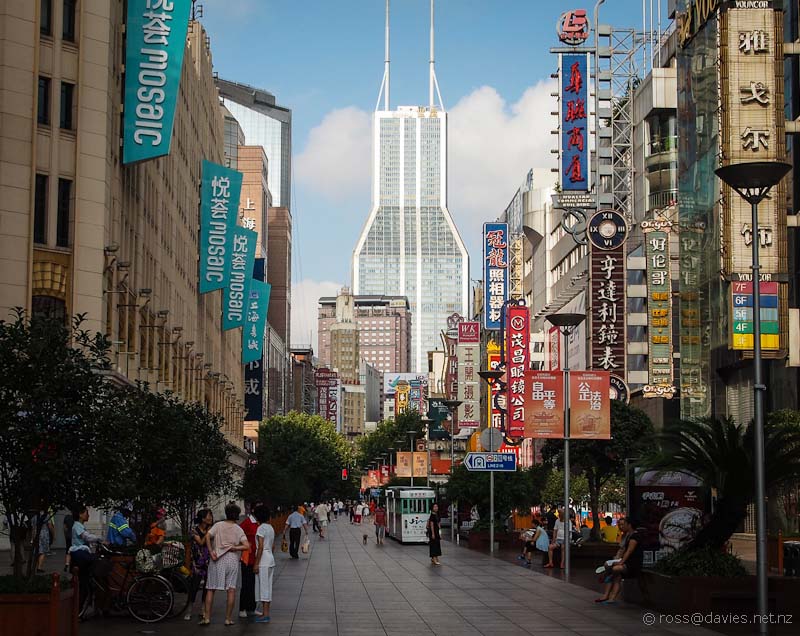 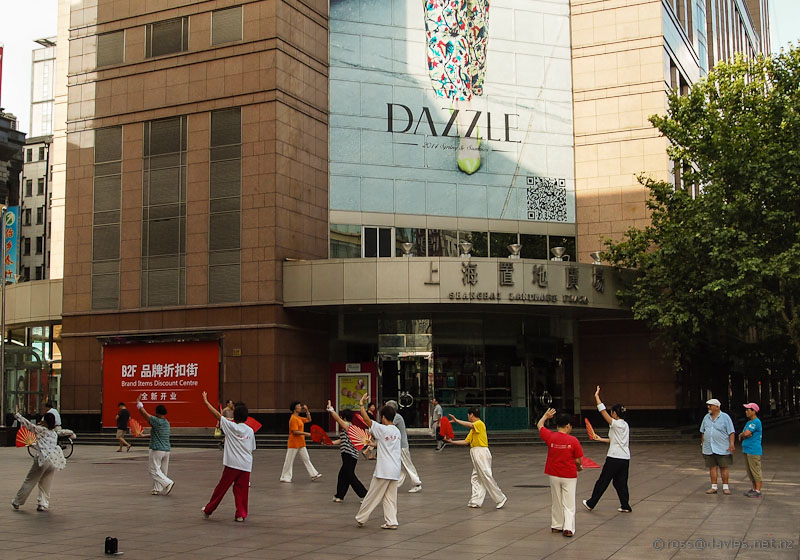 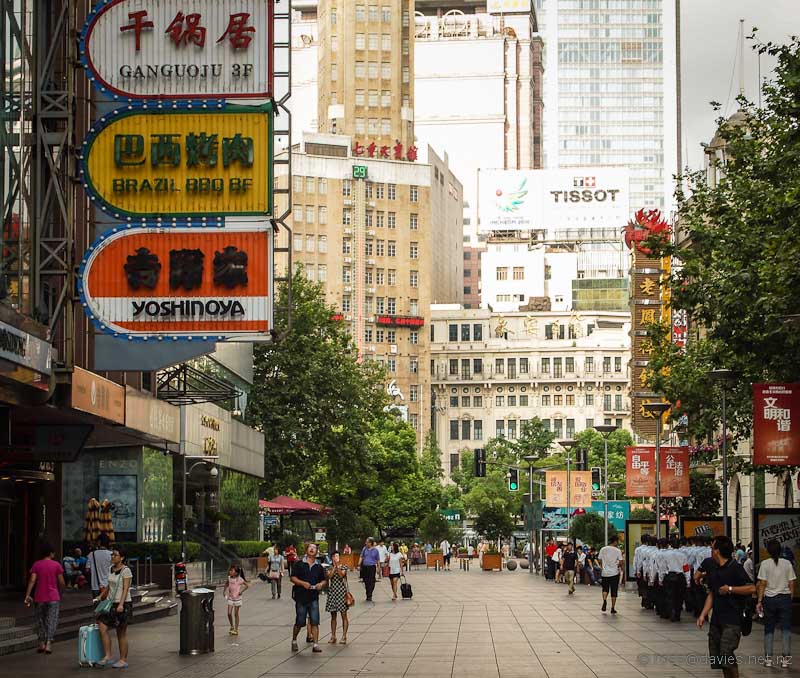 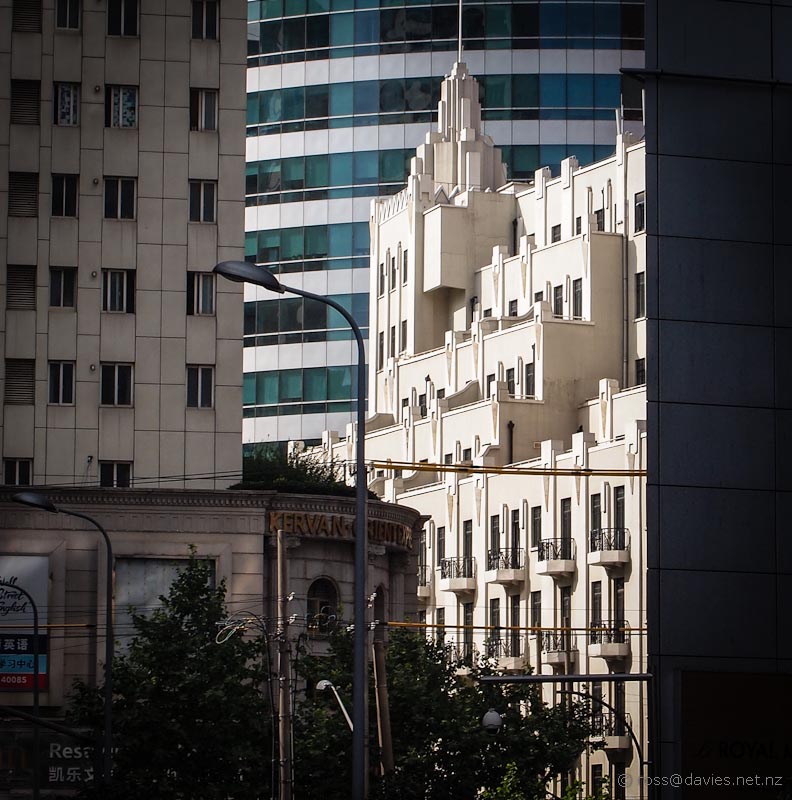 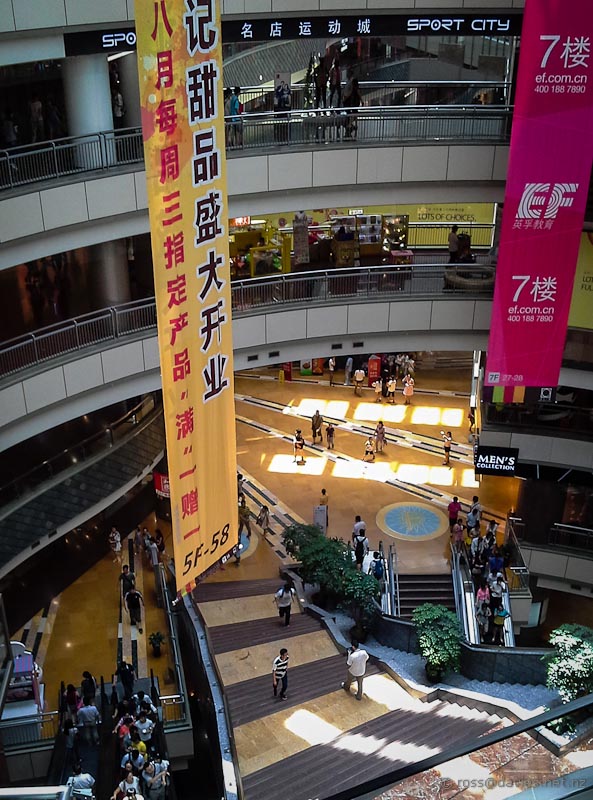 Eventually I had to concede that I’d lead us in the complete wrong direction and we were now slightly lost and a long way from the river. We stumbled upon a Hop-on bus stop and were soon persuaded that a bus ticket for a hop-on bus would be an excellent idea. The day was rapidly warming up and we needed some transport. We were soon enough hopping off the bus at The Bund for our first look at the iconic Shanghai vista. The Bund is a river frontage on the Huangpu River where the original financial institutions were located. Boom time was the late 1920s and most of the buildings from that period along the river have survived. Giving a wonderful architectural snapshot.

From The Bund there is a great panoramic view of the Pudong business district across the river. There is an extraordinary variety of high-rise buildings. I subsequently read Andre Agassi’s description of the vista as looking like it was designed by people on mushrooms. Which I think is a good observation. 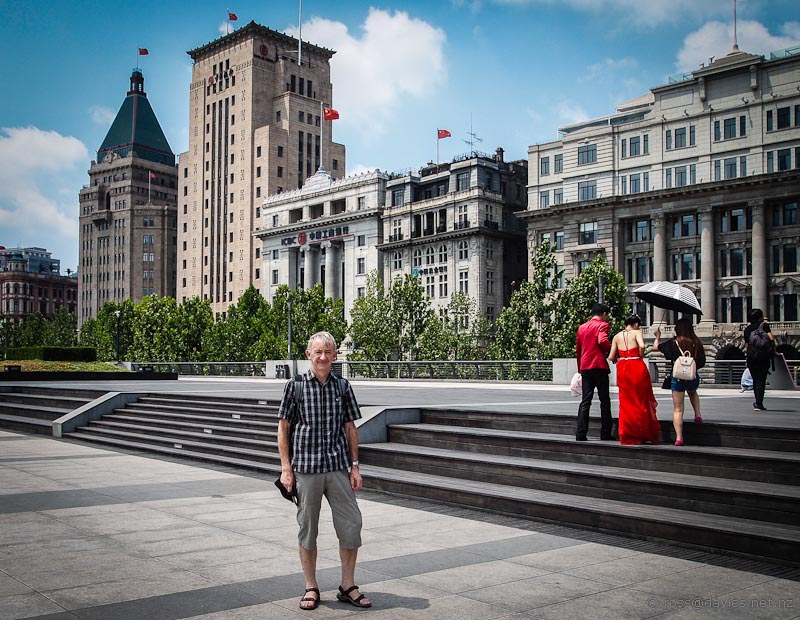 The Bund Shanghai. Behind Ross is a wedding party on a photo shoot

Panorama of Pudong District and Huangpu River and The Bund from the Bund. Click on it for a larger view. And spot the wedding photo shoot.

The Hop-on bus ticket we got was for 2 days, and came with admission to various places. We figured (rightly) that the day was going to be clearer than the next one so headed off across the Huangpu River Bridge to the Pudong Business District. This is an extraordinary collection of high-rise buildings that have sprung up over the last couple of decades. 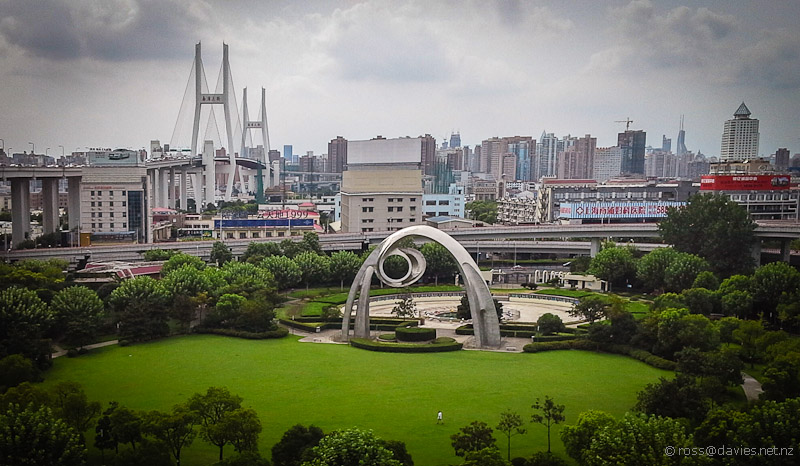 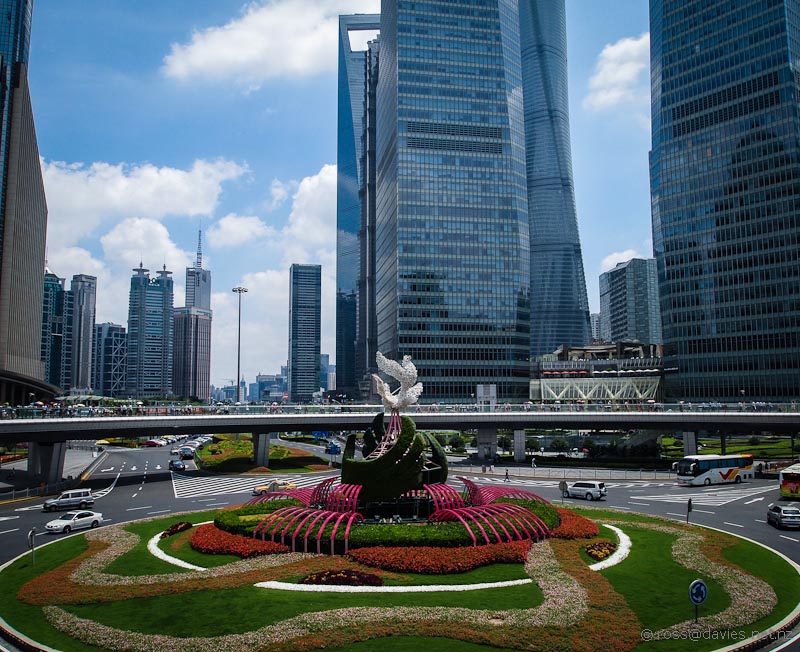 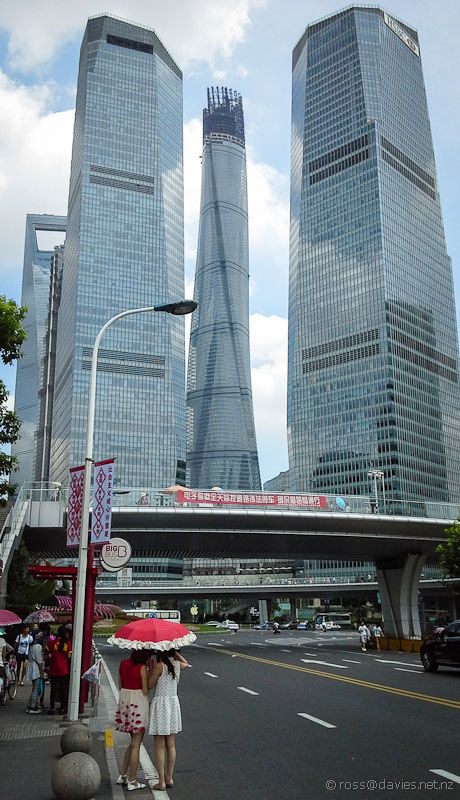 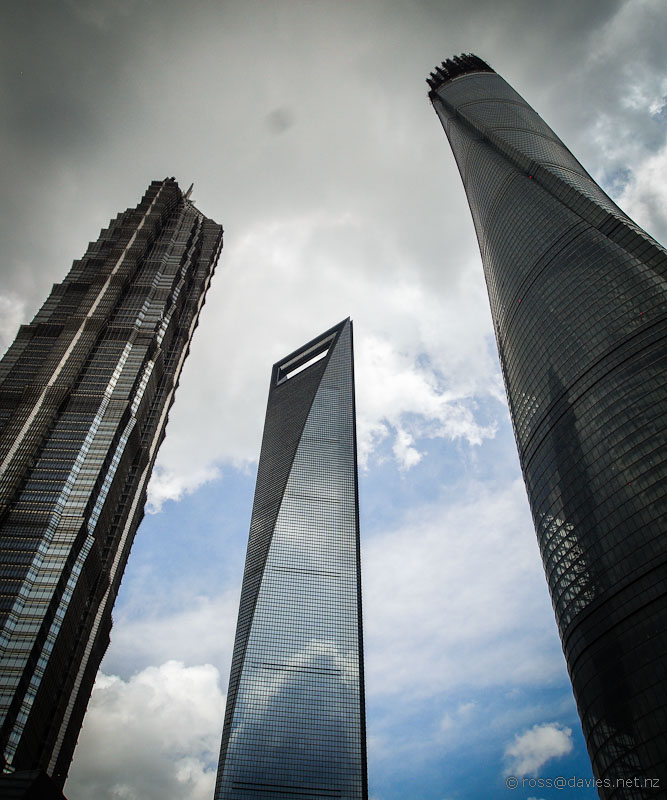 The Shanghai World Financial Centre is 492m high, with 101 floors with an observation deck on the 100th floor – currently the highest in the world.

The Shanghai Tower is still under construction. Early in August this year it was topped off at 632m high, with 121 floors. It is the 2nd highest building in the world. 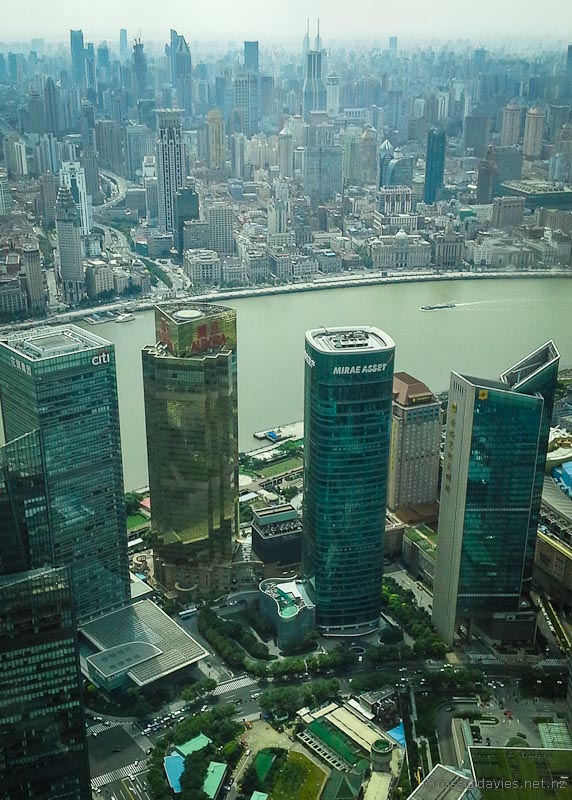 Shanghai, The Bund and Huangpu River from Jin Mao Tower 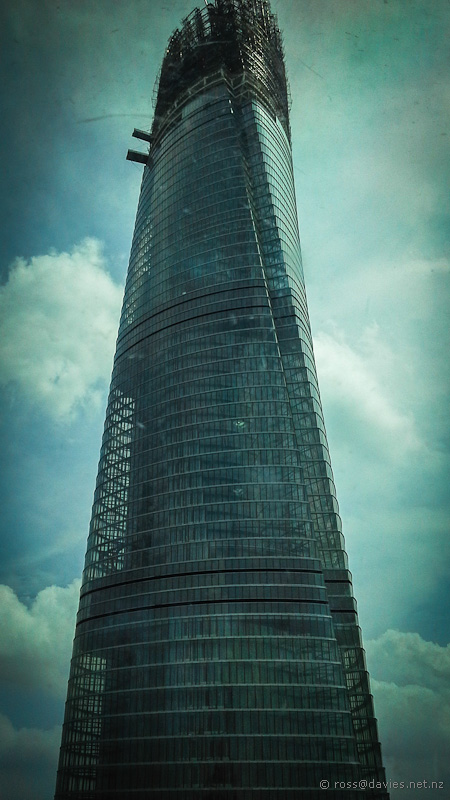 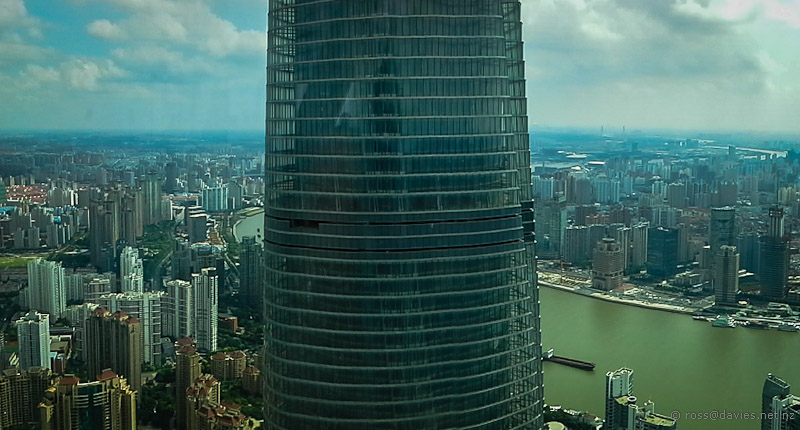 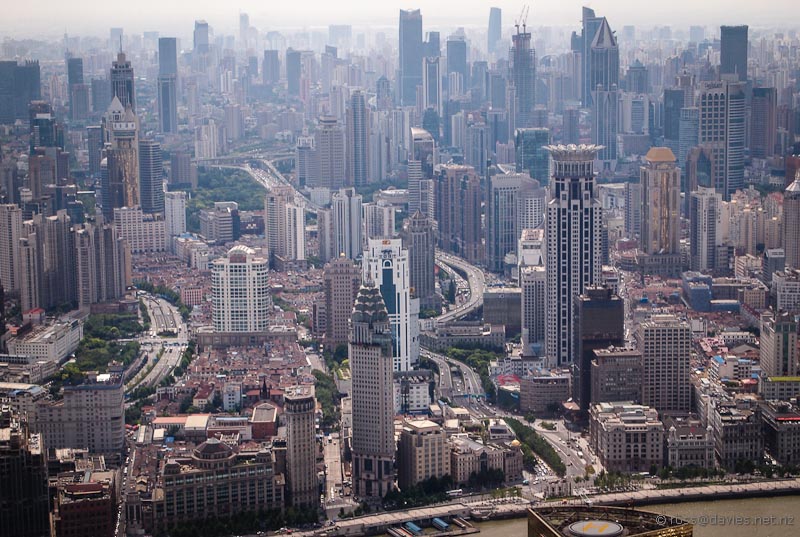 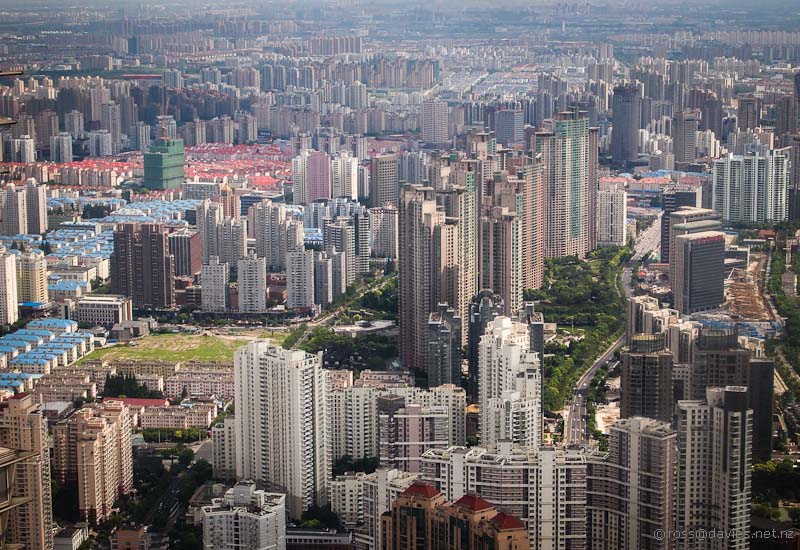 Huangpu River Shanghai – The Bund across the river. The Orient Pearl Tower on the right – 470m to the top of the tower. Click on the photo for a larger view. 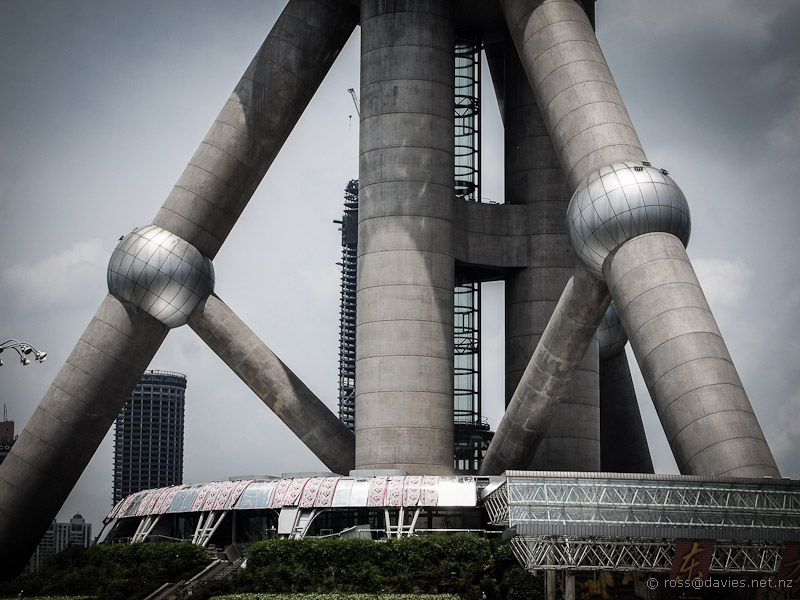 There were near-by shopping malls/plazas which scared me with the huge scale. And they scared us both with their huge prices. They were out of our range. There is a lot of money in Shanghai. 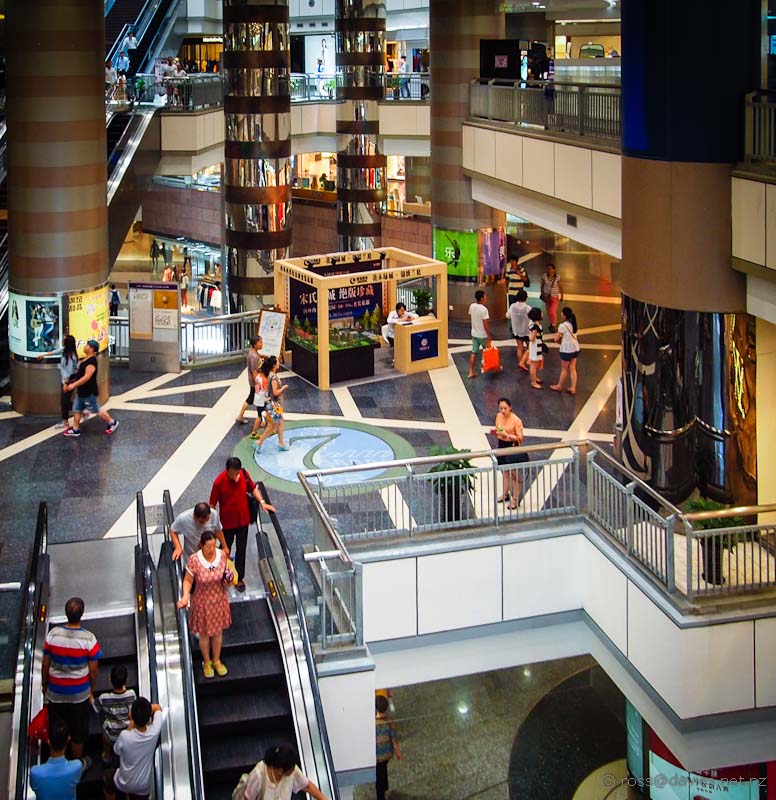 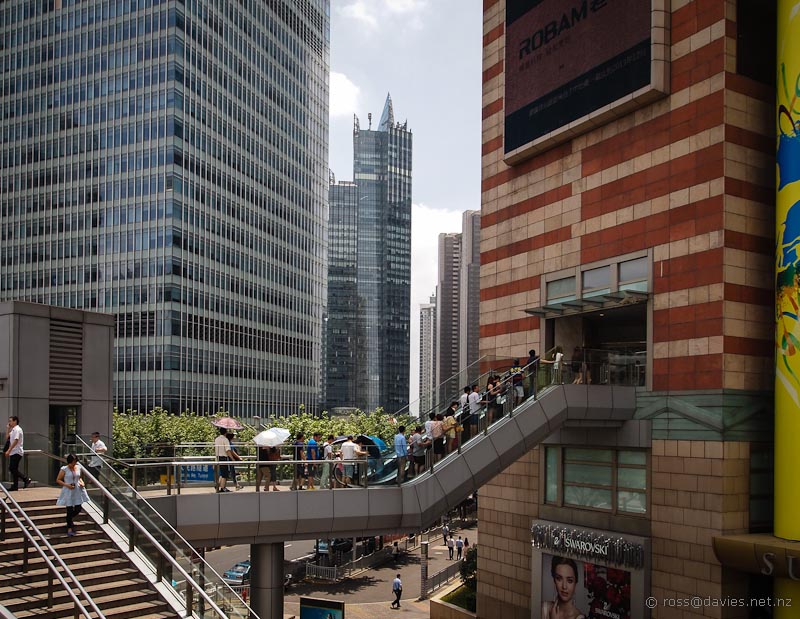 Entry to Super Brand Mall. This reminded me of the conveyor belts feeding fruit into the kiwifruit packhouses. This looks like feeding consumers into the cathedrals of consumerism.

Our bus ticket also came with an evening river cruise. We expected a cruise from the cruiseboat area further along the Bund. And were surprised to be put onto a different bus and driven miles away across and up/down the river. And then dropped off and pointed off to a ferry boat sort of terminal. The other passengers were almost entirely tourists from China. They seemed to be as much in the dark as us. After a lot of milling around we were let onto a cruising looking boat. We were rapidly learning that boarding anything in China usually resembled a rugby game with a hundred loose forwards trying to be first to the breakdown. With our rugby heritage we adapted quite quickly to the techniques and managed to get a seat in what looked like it might be a dining lounge.

It turned out there was a buffet dinner which was a surprise bonus. Cue another stampede. This passed the time as we chugged back to the Pudong/Bund area, until it was time to join the throng vying for elbow/camera room at the rails. It was an extraordinary sight. The skyscrapers were lit up. The Bund building were lit up. The boats were lit up. I like light shows and we loved this one. 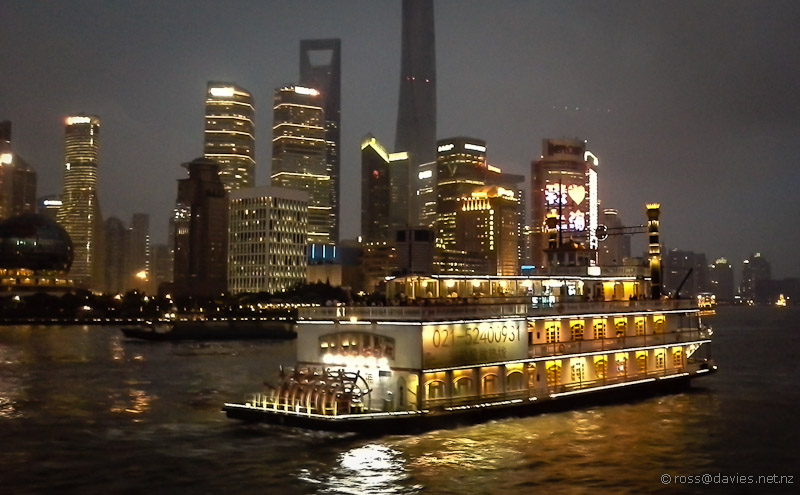 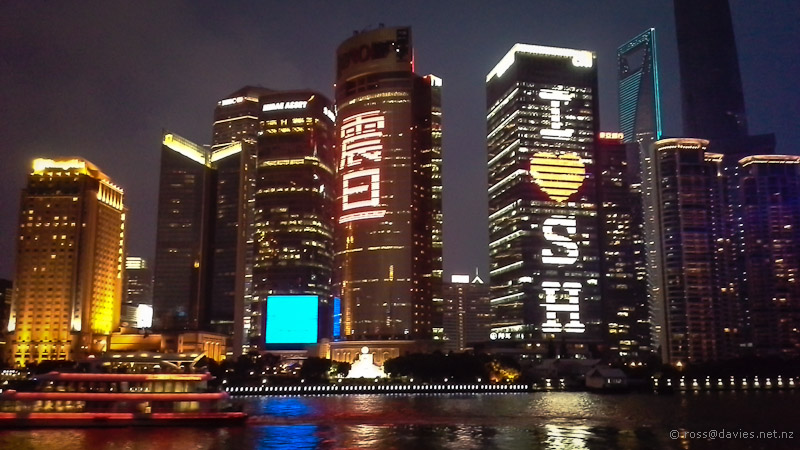 Pudong Shanghai by night. Shanghai Tower is the black shadow on the right, beside the subtle Shanghai World Financial Centre 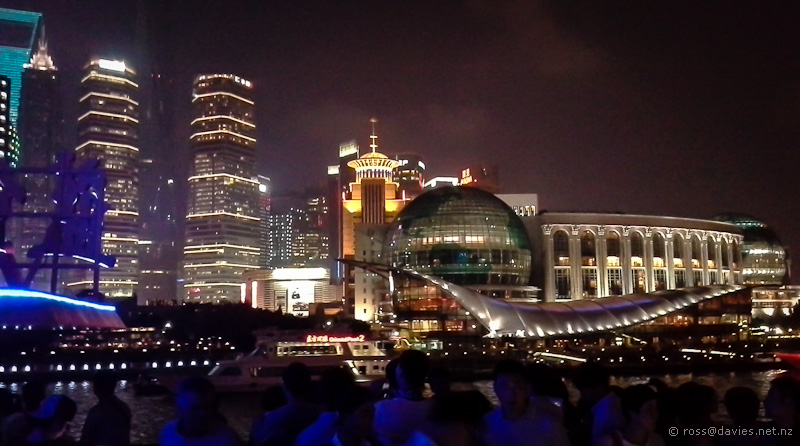 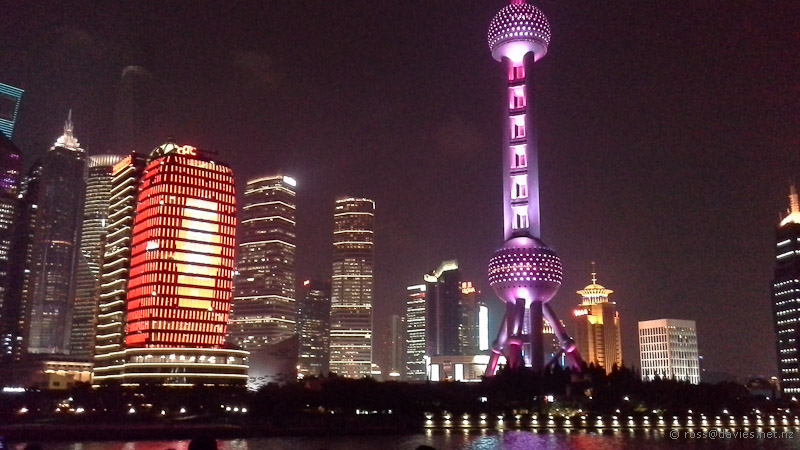 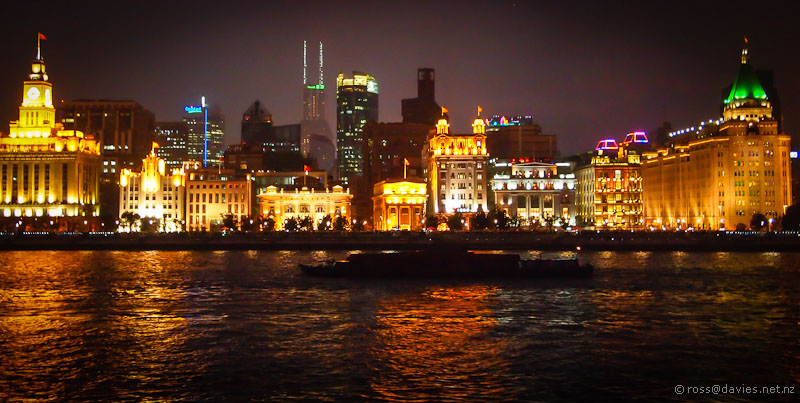 The Bund, Shanghai, by night. 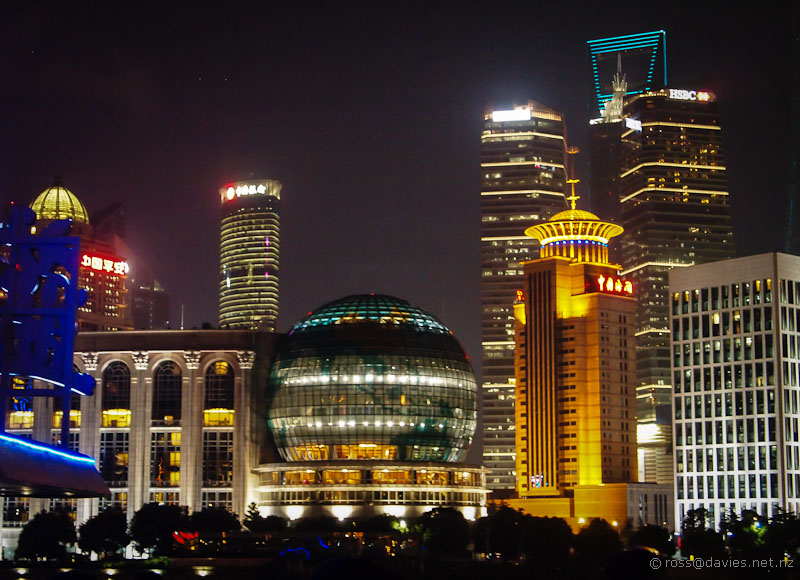 Pudong Shanghai by night. Shanghai World Trade Centre is the highest one, with the lovely blue lighting.

After a cruise up and down we headed back to our distant terminal. And chugged right past it. As the night got later and later. Eventually we got dropped back where we started. Cue another stampede back to buses with no idea where the buses were going. We did well, only being beaten by six older woman who stampeded like a well-disciplined forward pack. Eventually we were dropped off  somewhere. All we knew was that it wasn’t where we got on, but everyone else was getting off. Luckily with a map and GPS on my tablet we realised we were close to the East Nanjing Metro station where we started in the morning. So we were soon on a train heading back to our hotel, tired and satisfied and reflecting on a very interesting day.

1 Response to A Big Day Out in Big Shanghai