Heading Up The Highway – To Sideng Village Shaxi

Time to confess. We are travelers who follow Lonely Planet guidebooks. We realise that Real Travellers look down on us, faithfully following the words as writ, clutching our chunky little books as we try to navigate our foreign adventures. We don’t take every recommendation as gospel but we do turn up at places populated by other followers. We’re OK with that. We’re getting older and less tolerant of bad surprises so some help and advice is appreciated. We’ll never be a Winifred or Wilfred Thesiger.

Three years ago we traveled in South East Asia using a Lonely Planet guidebook themed around the Mekong River. It included a good chapter on Yunnan Province in China as that is where the Mekong River originates. We considered that time getting between Laos and Vietnam via Yunnan but in the end didn’t. Nevertheless our interest was piqued as they say and here we were now traveling in Yunnan with that chapter ripped out of that book. (I think Wilfred might approve of our weight saving if not of the Lonely Planet concept.)

That 2009 guidebook spoke well of the undiscovered Shaxi region of Yunnan province. And I know, that’s the kiss of death for any undisturbed locality. However, we included Shaxi on our itinerary, hoping it was not yet overrun. Back in 2009 travel arrangements from Dali to Shaxi were a little indirect and informal. I was sure there would be more direct options by 2014 but enquiries at our Dali guesthouse revealed that the transport was no more organised than 5 years ago. This disappointed me; stupidly. It was a good sign that I couldn’t read. Anyway, enough of this introduction. Time to hit the road. 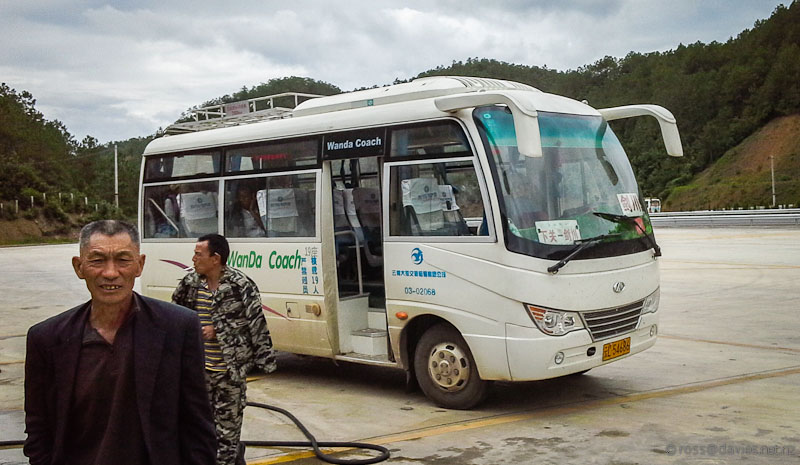 Our bus stopped for water on the Dali to Lijiang Highway

From Dali we had to backtrack to the Xiguan bus station by taxi, even though the bus came back past the Dali Old Town. Clutching our precious piece of paper from our guesthouse with our destination in Chinese characters we managed to get a ticket and a seat on a bus which we were fairly sure was going to where we needed to go – a small city where we would need to find a smaller bus to Shaxi. Once we set off I could follow our progress on my tablet which was certainly reassuring as the  bus took all sorts of deviations closer to our destination.

Mostly we traveled on a four-lane motorway. Which had materialised since our guidebook was written. Safe overtaking and no lumbering agricultural vehicles makes for more relaxation. They seem to have taken care of some of the hills by tunneling through them. We stopped once for what we thought was a toilet and refreshment stop but it was more about feeding water to the bus. I don’t know why a modern bus consumes water  and it wasn’t the only one we traveled on that was thirsty. 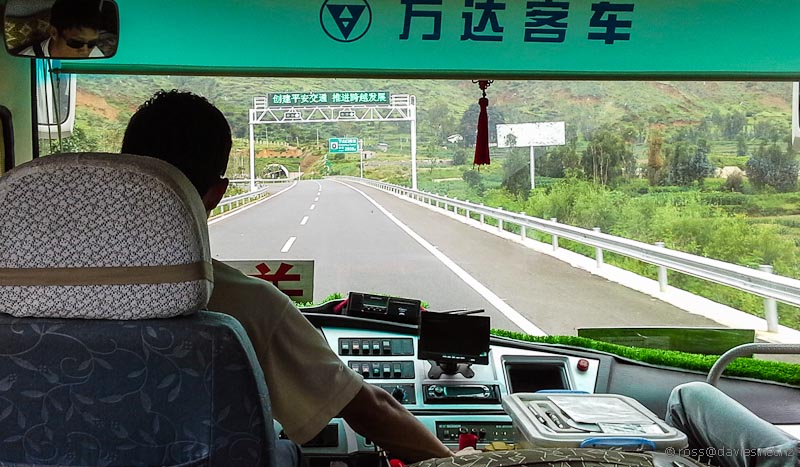 Further up the motorway we exited onto minor roads and in a roundabout way reached our destination. There we were directed to a bunch of small vans with seats, one of which was going in our direction. We stood around with a bunch of people who turned out to be fellow passengers. The little van chugged over a big hill and down into Shaxi, our destination, about 50 minutes later. Good value for $2 each.

We were never completely sure but think Shaxi is the name for the wider area and Sideng Village is the name for the central town we were staying in. The central part is closed off for most vehicles which is great. Our map suggested our guesthouse Cato’s Inn wasn’t far away so we set off down a lovely lane and walked into a lovely town square. 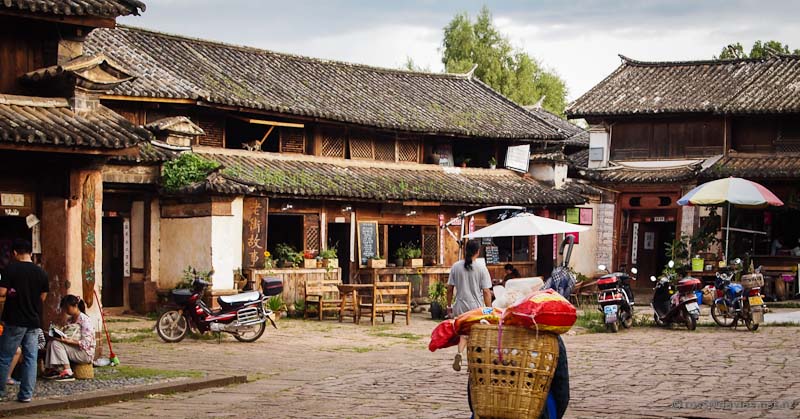 We guessed our place was along a lane and headed along the most likely one. Not far along we asked someone who pointed out that we were practically standing beside the door. And a lovely guesthouse it was too. 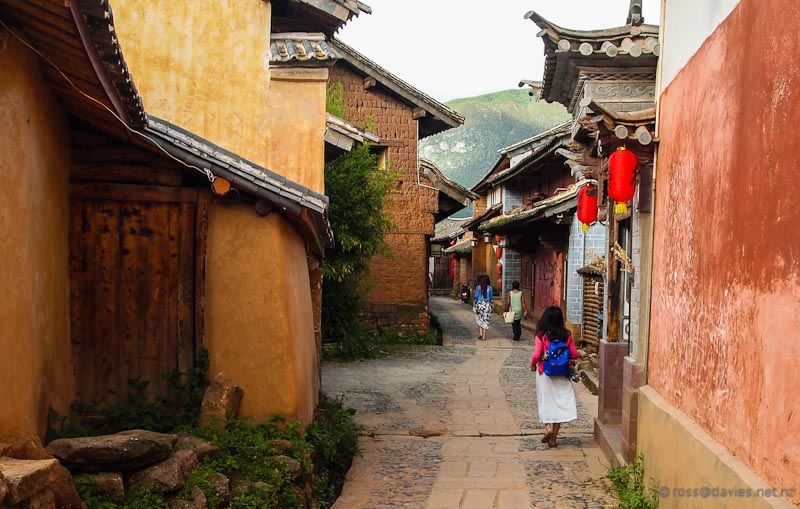 Alleyway near our guesthouse Sideng Shaxi 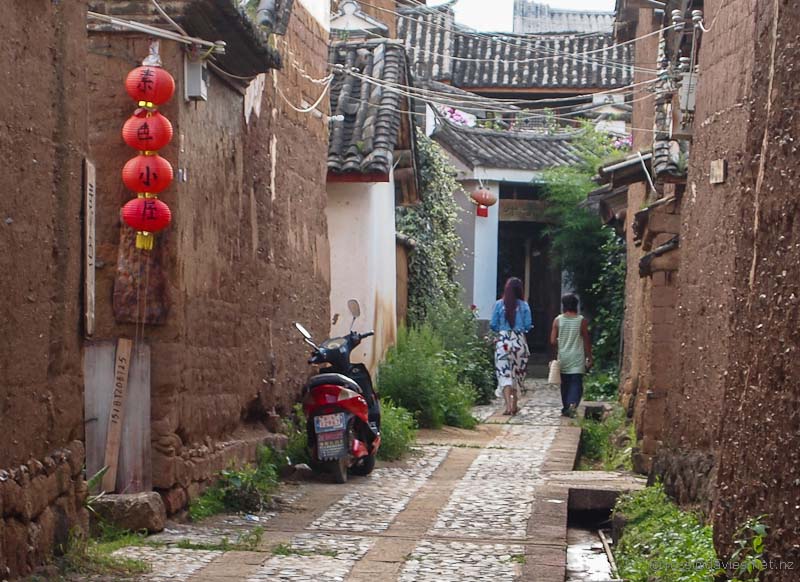 After a bit of freshening up, we ambled back to the market square to take it all in. And to enjoy a nice Dali beer. 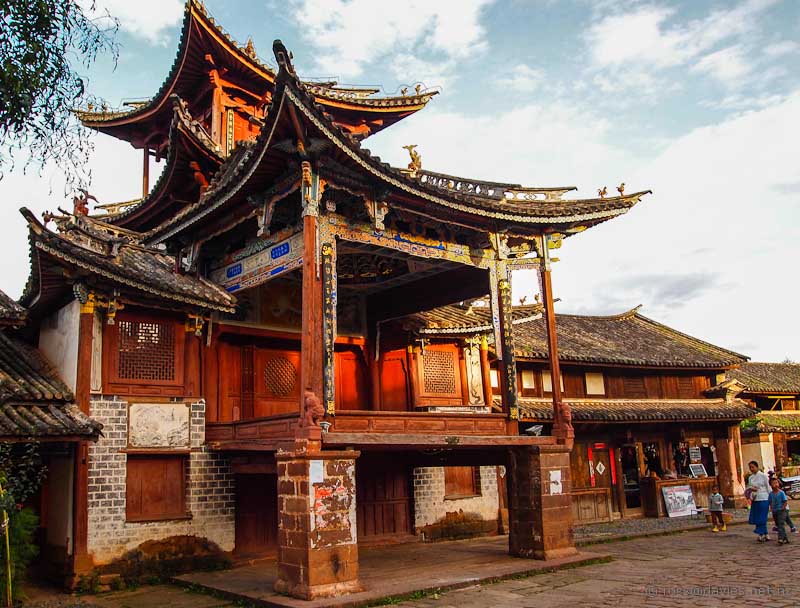 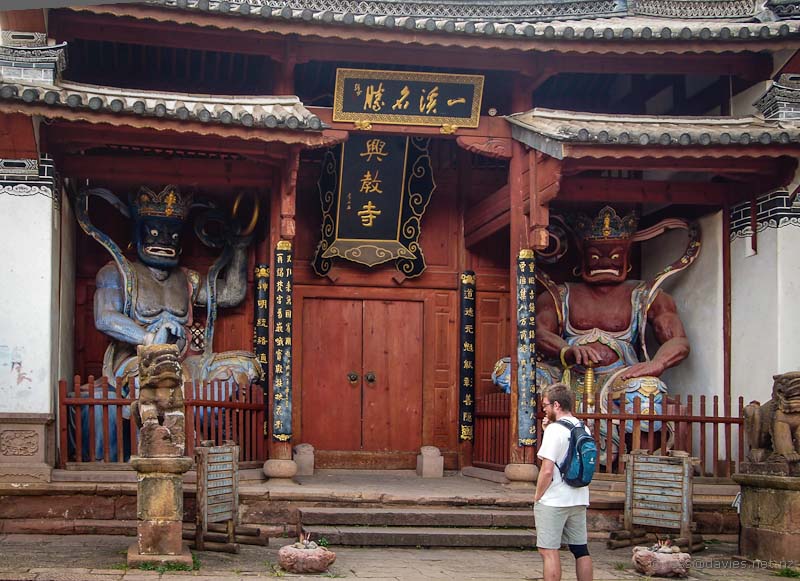 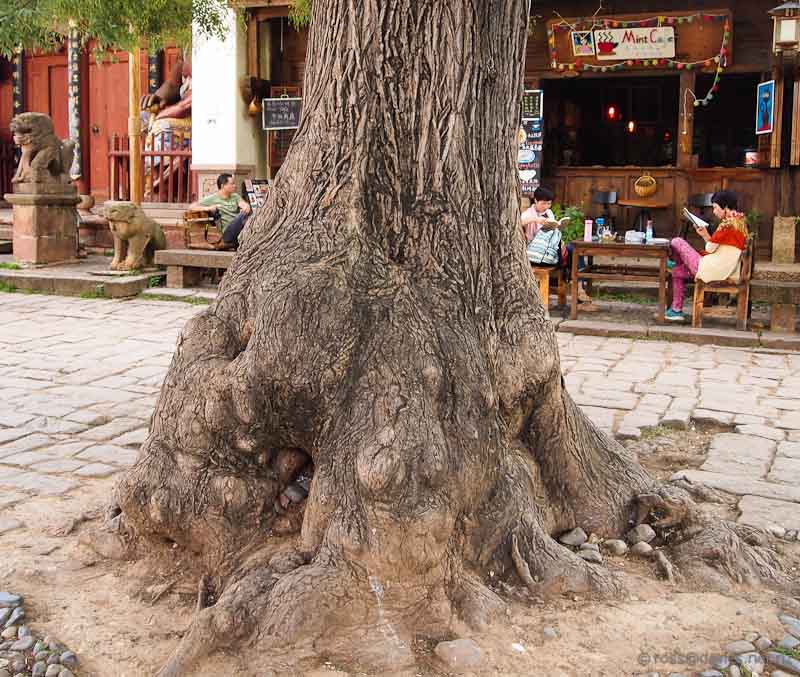 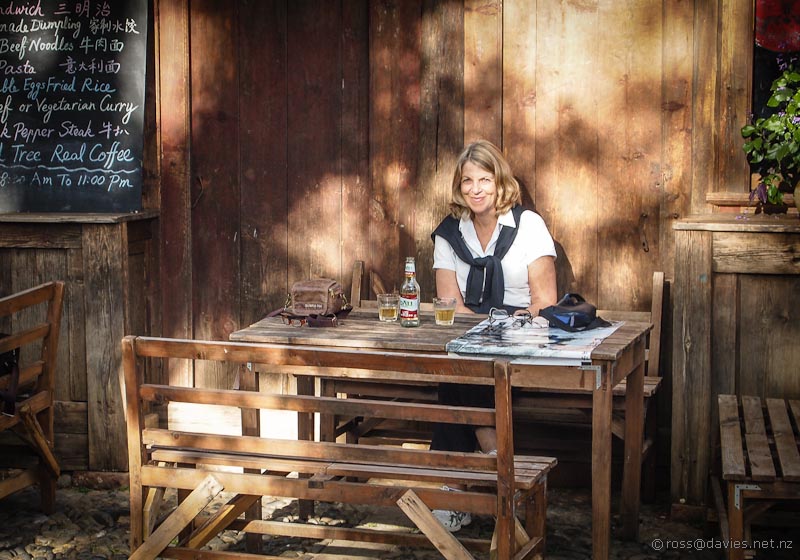 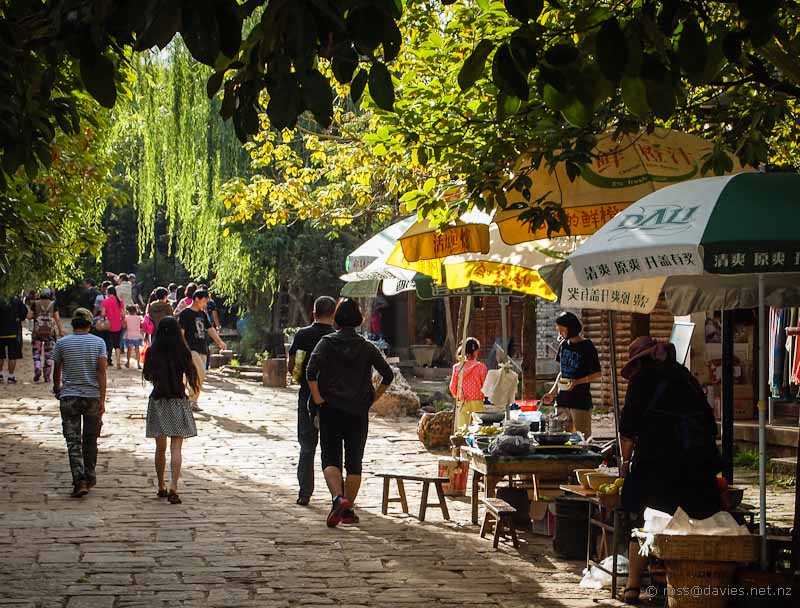 Later we went for a wander through some of the alleys of the town. It is a complete delight. I developed a bit of an attraction for some of the doorways. 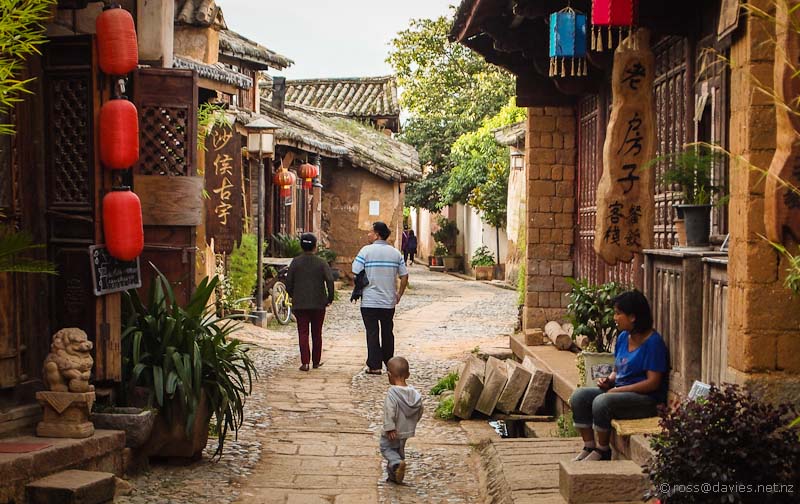 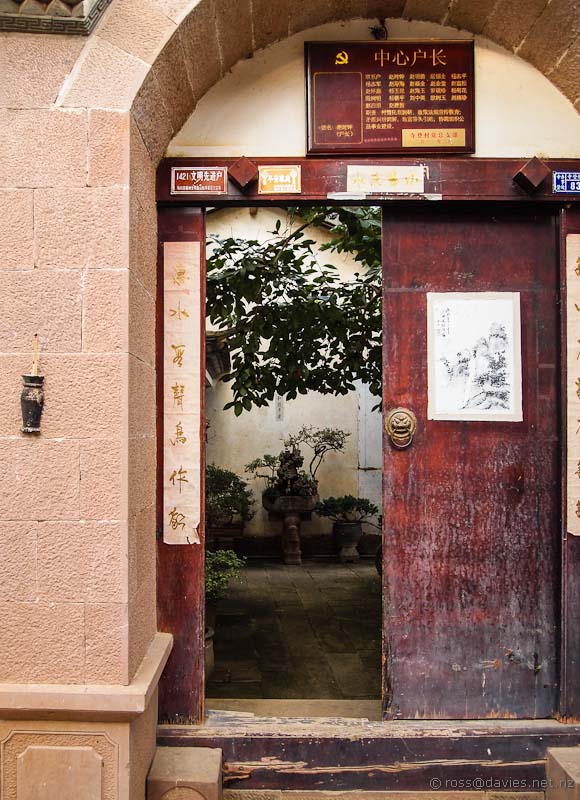 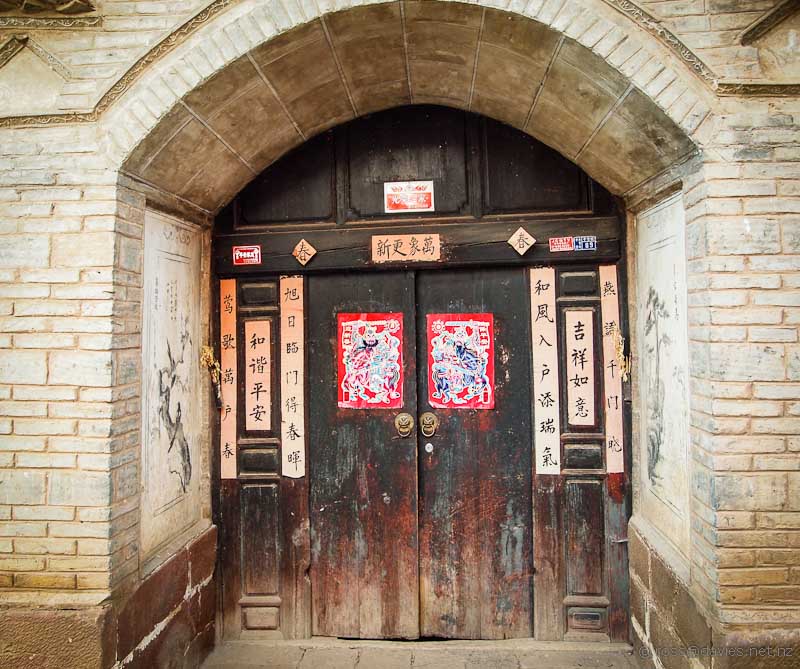 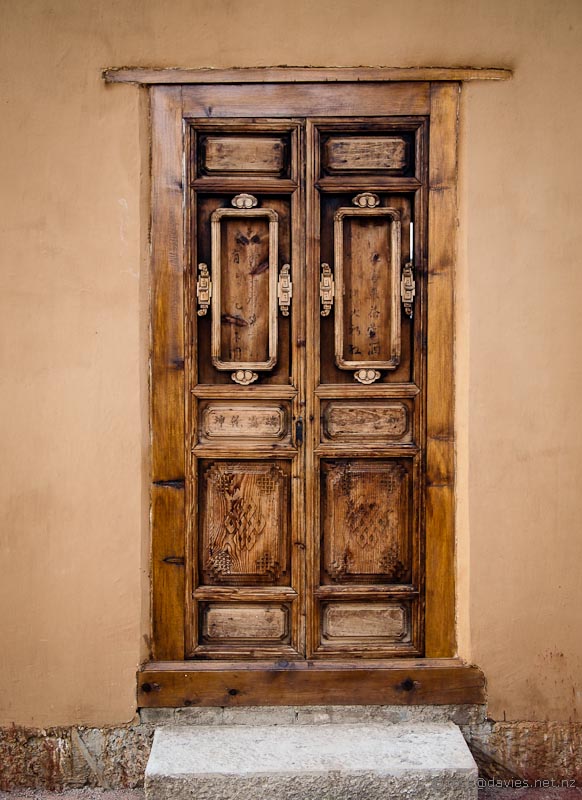 After our evening meal we went for a walk down to the river. There  is an interesting old bridge with very authentic-looking paving stones. 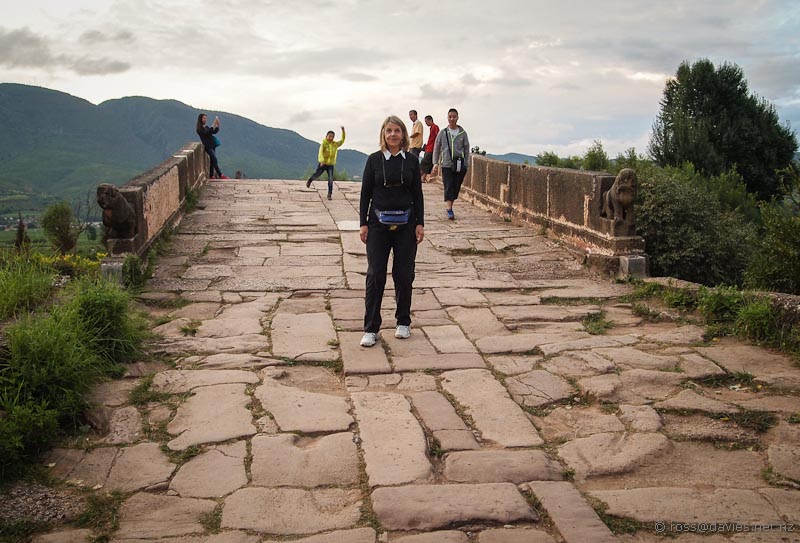 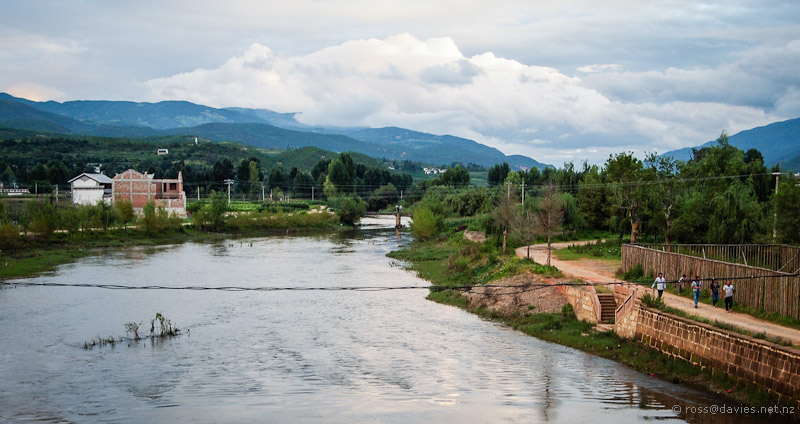 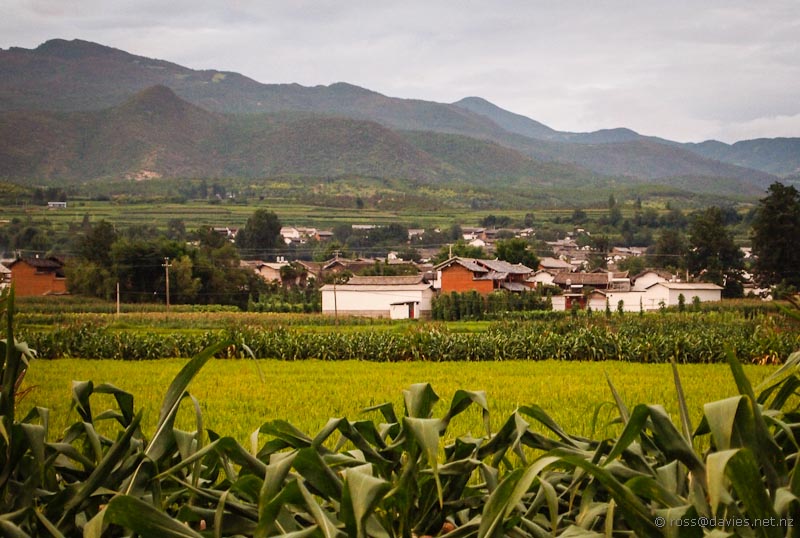 Near Sideng Shaxi. It’s not a big town and the fields are not far away.

On the way back I was stunned by the ceiling of the tower stage in the square. 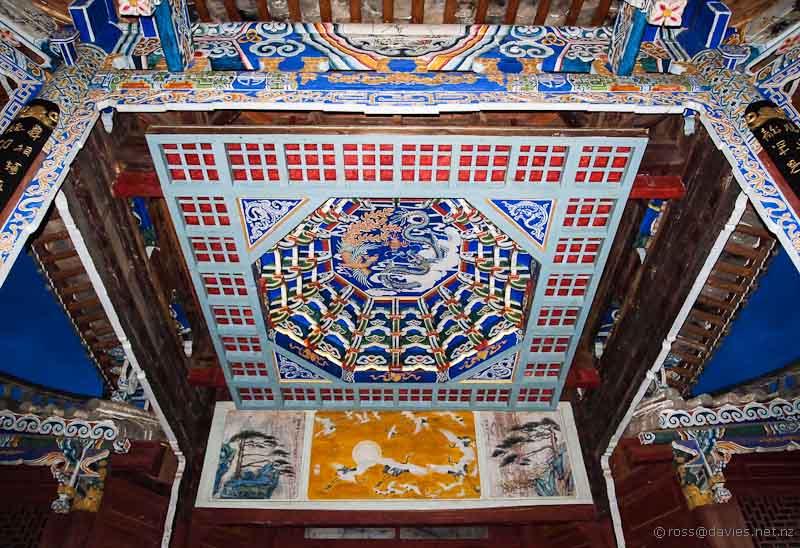 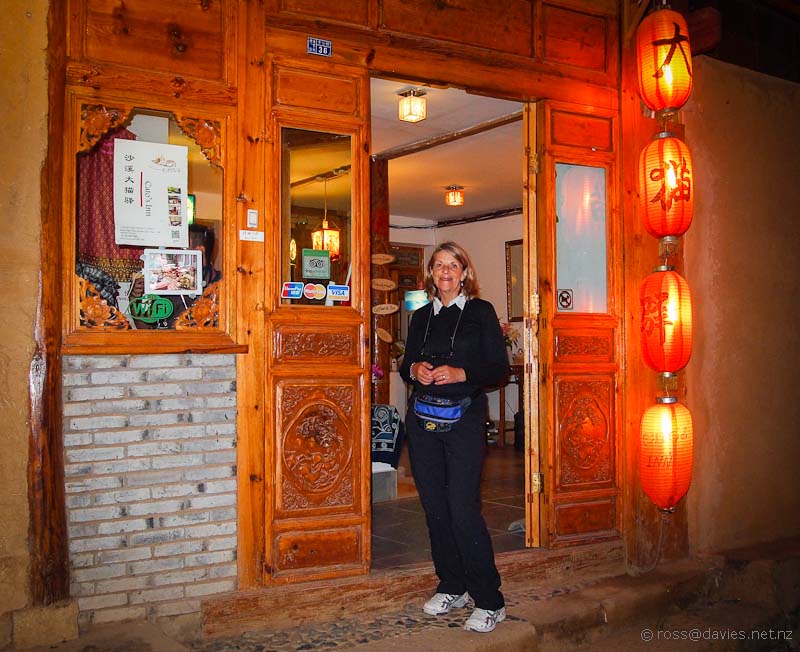 We had found a lovely guesthouse in a lovely village. The village is getting busier, and looked like it was gearing up for busier times. But it hasn’t happened yet. We felt like we were just in time. It still takes a bit more effort to get there. There was me wishing for more streamlined transportation. What was I thinking?

2 Responses to Heading Up The Highway – To Sideng Village Shaxi