We had known that Dali in Yunnan province in China was near a lake, Erhai Lake to be exact. But we hadn’t appreciated that it was underneath a sizeable mountain range called Mt Cangshan. Faced with a choice of lake or mountain sightseeing we decided a day in the hills would be good for us. We needed some exercise and acclimatisation . Dali is at 2,200m asl. and further north in Yunnan we were headed for over 3,000m asl.

One of the things we found with China was difficulty getting detailed information in English on tourist activities. As FITs (Free Independent Travelers) we were organising ourselves. We were happy with that but often our excursions were more of a magical mystery tour. We chose guesthouses and hotels on their reputations for tourist information in English, and were pleased we did. But often this was still vague on important detail.  This day was an example of that.

Mt Cangshan is more of a mountain range with a highest point over 4,000m. It is cut with about 18 rivers/streams on the eastern side which have created deep gorges. There is a trail part-way up that traverses the range for about 19kms. This trail has a couple of gondolas and a couple more chairlifts providing access up and/or down. Plus there are some trails up and down as well. You’d imagine a map showing the possibilities and options would be a good idea. We did. There wasn’t.

Our guesthouse gave us some help; and arranged for a taxi for the 15 minute trip to the gondola base at the southern end of the trails. We assumed we’d return the same way and set off up in the gondola. [I shouldn’t mention that years ago I used to rail against motorised access to mountains in New Zealand or hill-climbing in a gondola might seem hypocritical.] 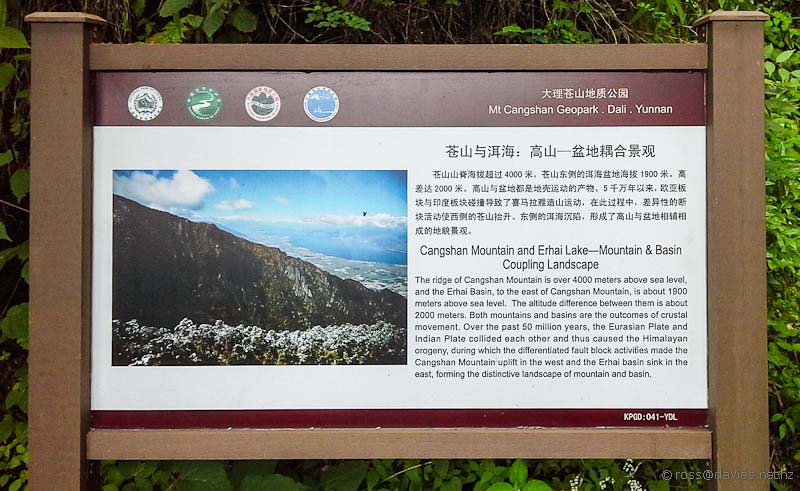 The gondola climbed up over a ridge before dropping down into a steep gorge and the Gantong Cableway Station. 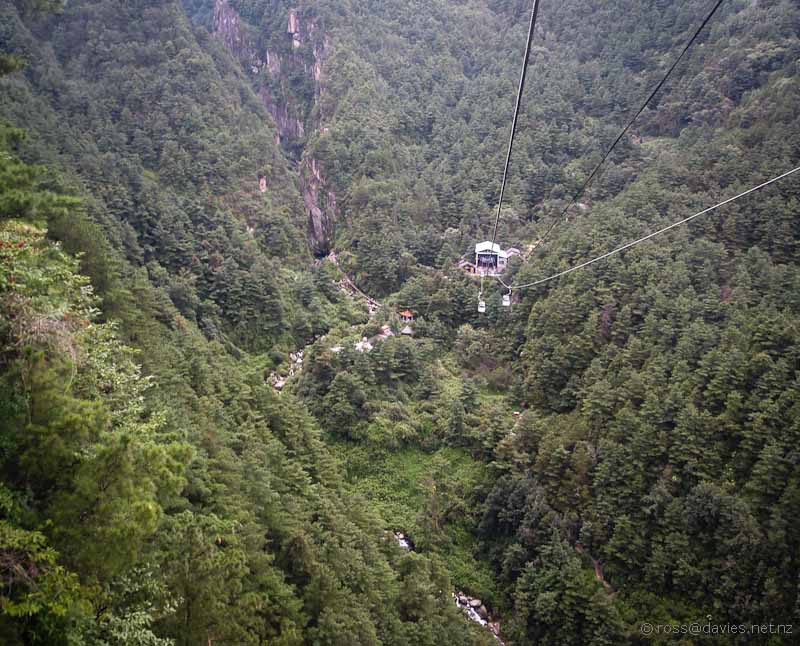 In many temples in Asia there are places where you can buy message ribbons and hang them from trees. It’s the message that keeps on asking – fluttering in the wind is more likely to attract the attention of the relevant god I guess. 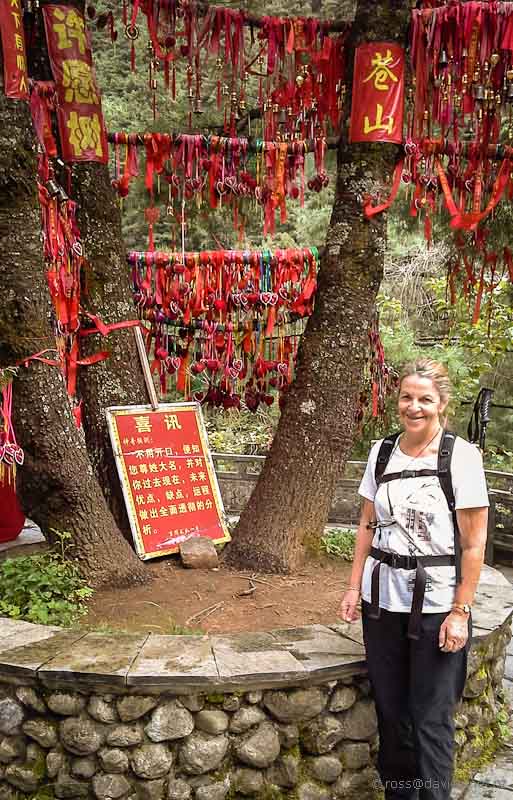 There was a maze of trails near the gondola terminal to parts of the stream. With lovely clear water. The scene below could be in New Zealand. Except for the man-made dam and stepping stones, and the shrine in the middle of the pool. 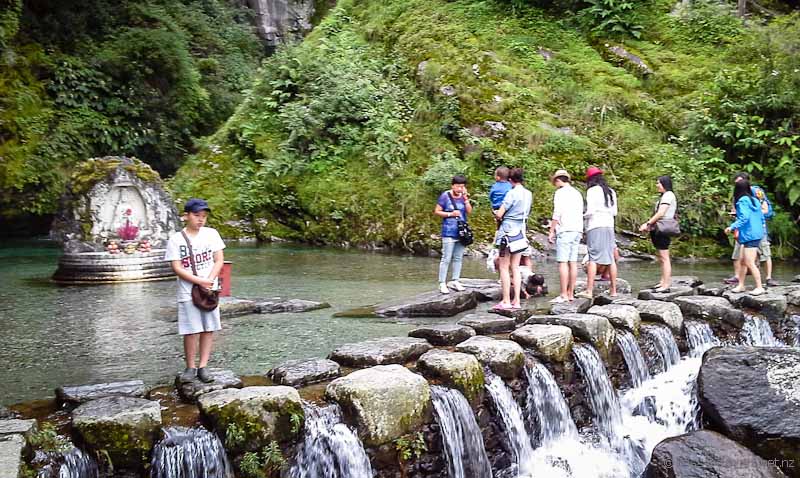 The gorges are definitely spectacular. Signage suggests that the gorges have been eroded/cut in the last 10,000 years. I’m no geologist but I’d have thought it’d take a lot longer than that. 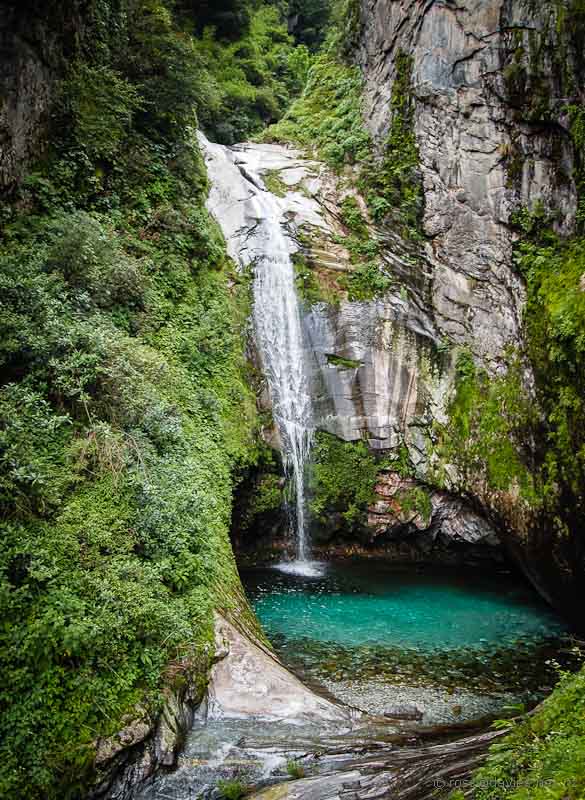 Children in China seem to require a lot of attention and entertainment. Water pistols seems popular in the outdoors. 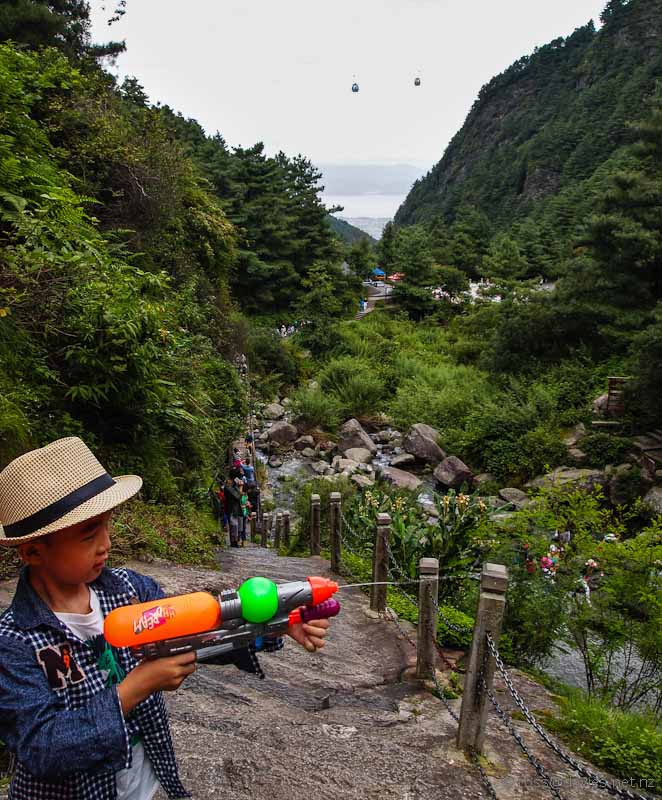 How to keep children amused in the outdoors, Mt Cangshan Dali. [Spot the gondolas.]

Information signs in public areas in China are often very detailed and informative. With interesting terminology because of translation. In New Zealand we tend to be brief and tell people it’s dangerous and they better know what they are doing. I like the Chinese approach which is more like a Mountain Safety Manual etched in stone. There are some really good tips here. 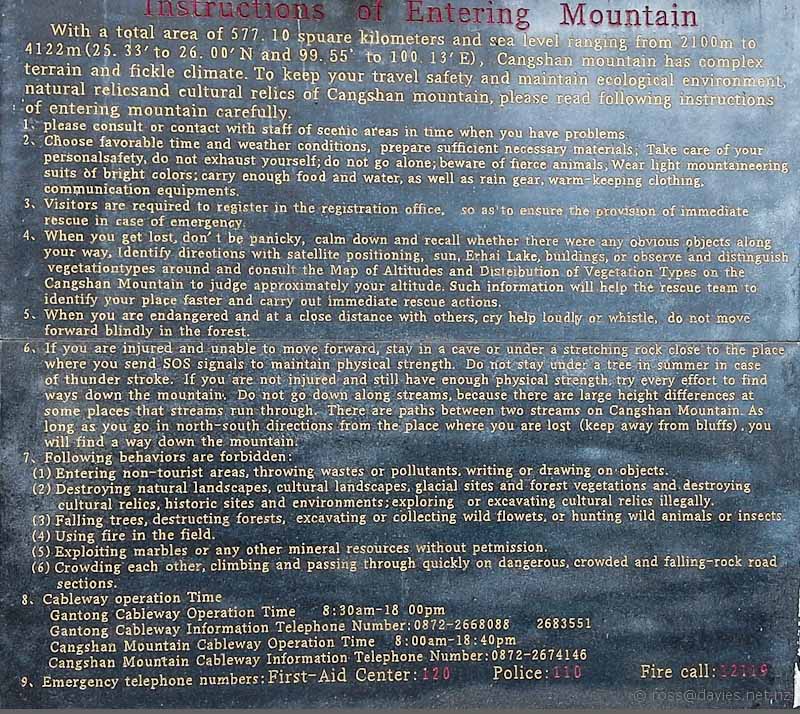 Opportunities for litter recycling are far more obvious throughout China than in New Zealand. These bins were particularly cute, being made of stone. 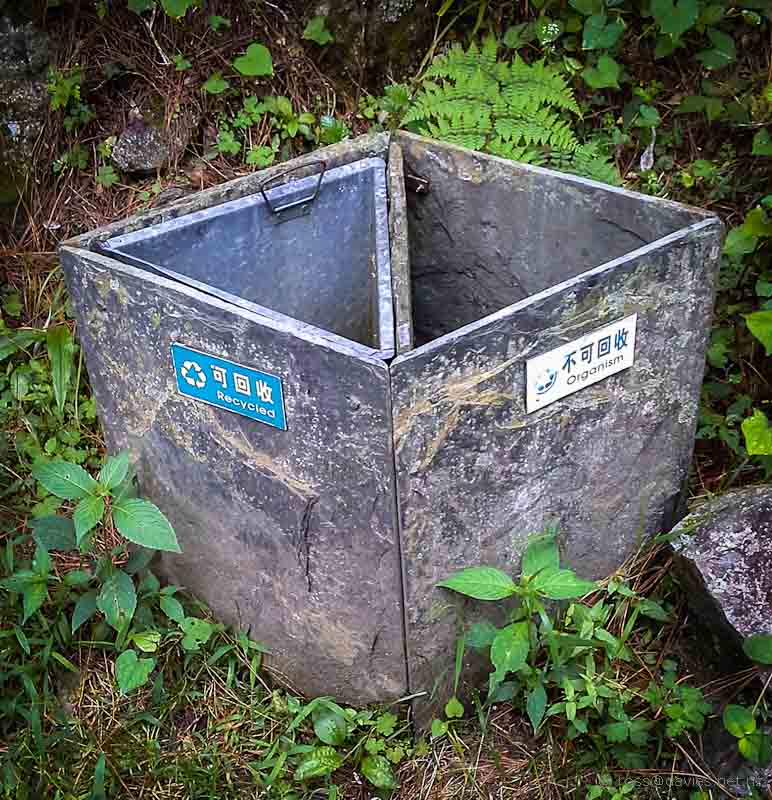 We thought we’d make a 4.5km walk to some named pools, and back again to return down the gondola. It started with a zillion steps and we rapidly lost heart, having no idea of how it all worked. Then, just as we were wondering how much longer before we went back, the steps came up to this lovely path called Jade Belt Road. All paved and nearly level. We had no excuse for not seeing how far it went so off we strode. 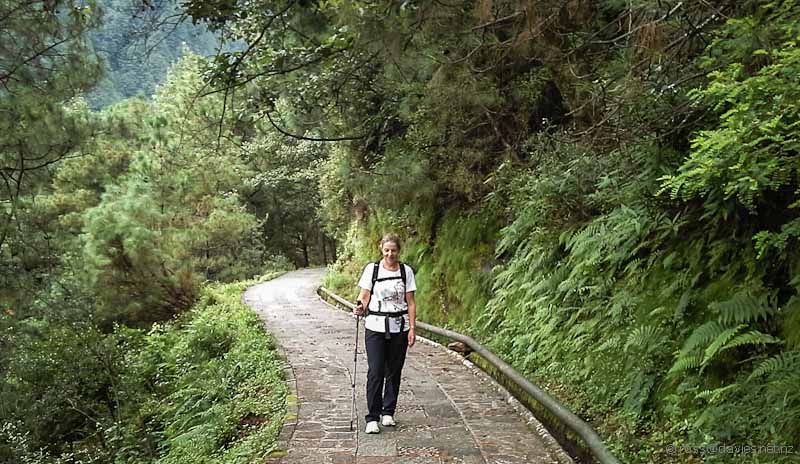 There were lots of interpretation signs about geology and botany. The Protected Animals sign showed us all the animals we would not see. We were happy to not meet a Black Bear but disappointed to miss a Clouded Leopard. They in particular will need protecting; who wouldn’t want to take one home? 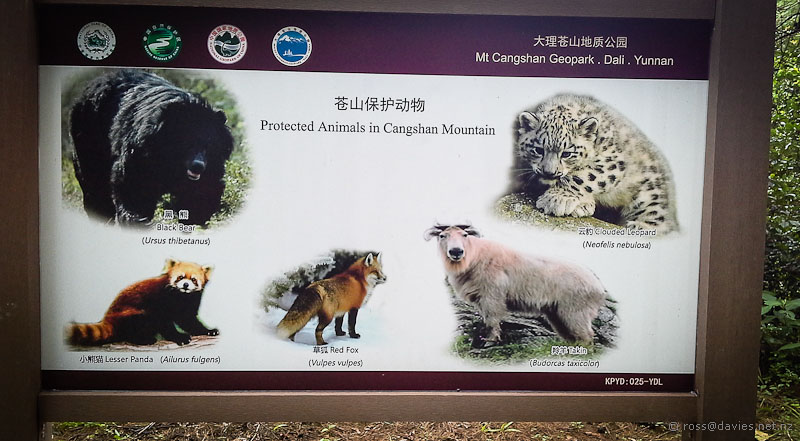 The Jade Belt Road trail kept on on the level. When it came to an obstacle like a bluff a way along had been blasted through. 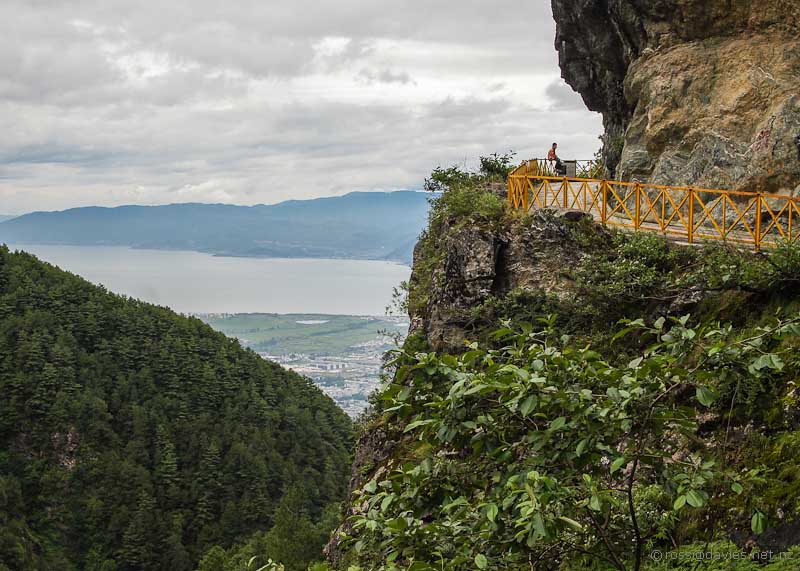 I wasn’t so good looking over the  edge of these bits. It was a long way down. 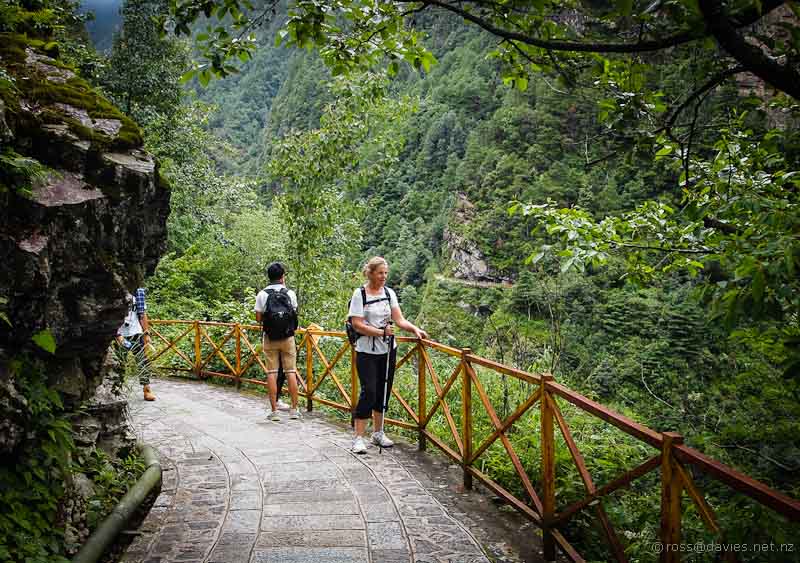 The path was heading into the next deep-cut gorge which included the Qilongnv Pond. We never got to see the pond but the stream below the pond was a lovely mountain-stream sort of stream. 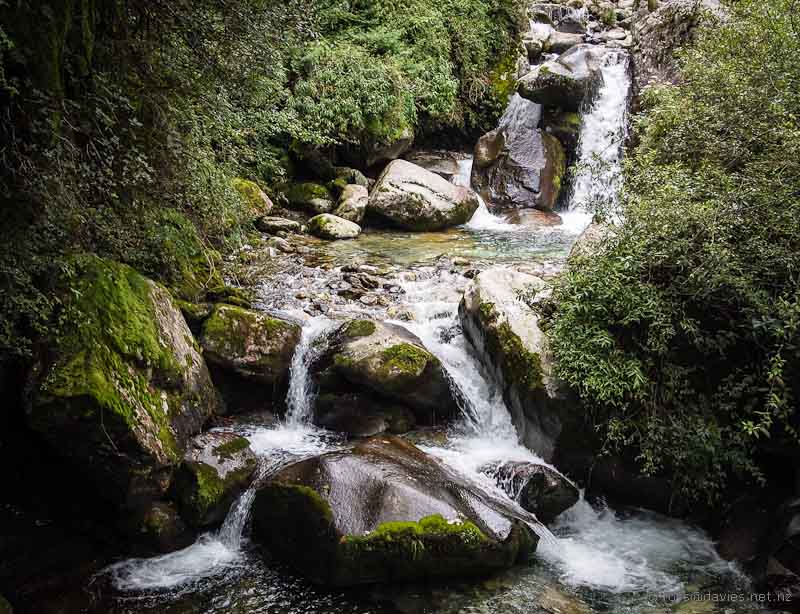 The stream could easily have been in a New Zealand landscape, except for the buildings just beyond the stream. And the people boiling corn cobs to sell to passing walkers for their lunch. 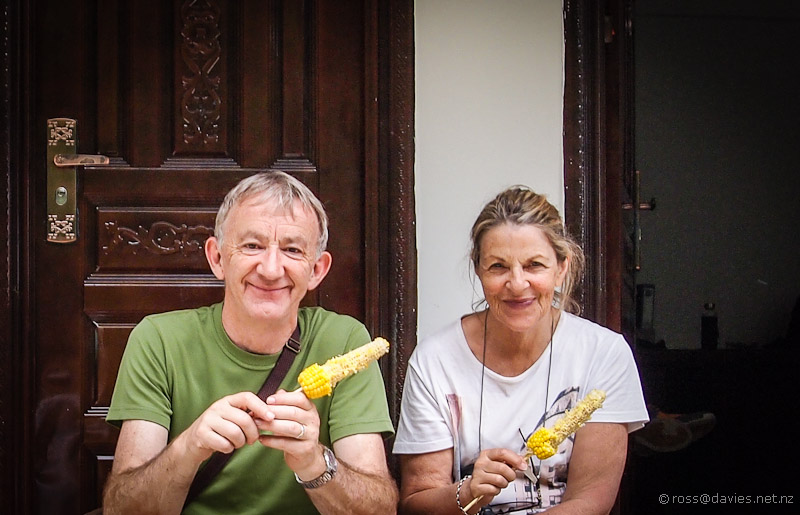 As we followed the trail into the side-valley we could see another cableway overhead, carrying gondolas to a half-way station high above our trail. We’d wondered about linking with this to get back down again but it was so much higher. Then as we got closer I could make out some sort of rail system between the two. I thought it might be a funicular railway but there had been no mention of any such link and it seemed too much to hope for. 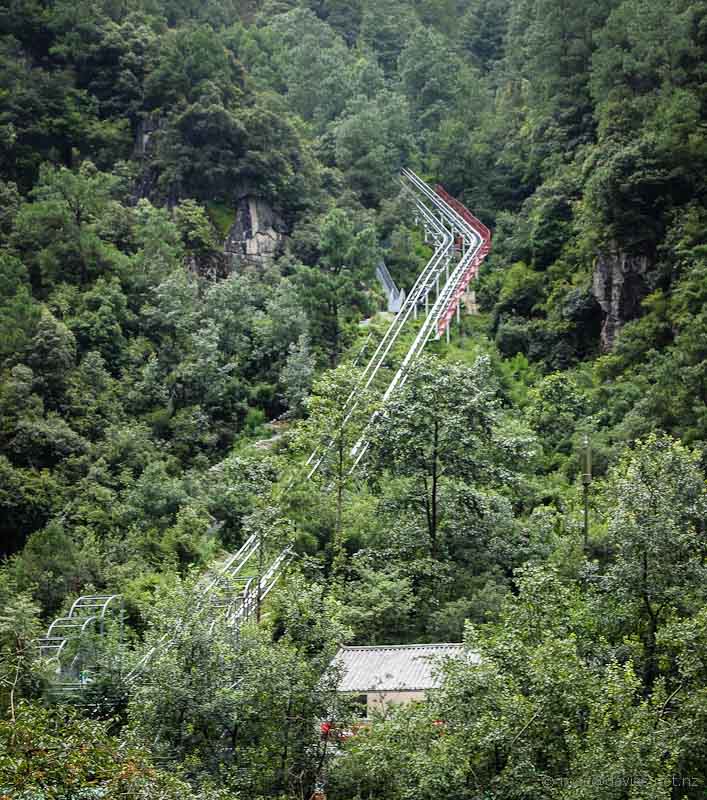 But a sign mentioned tickets and we soon discovered that for 3 dollars each we could get up to the cableway station above. It took us about 3 seconds to agree that this was a good option. It was a very shiny new system and appeared to be still getting finished off. I am fascinated by funicular railways, having first seen one three three years ago at Penang in Malaysia. I wonder why such a system could not be used to recreate the Denniston Incline railway near Westport in New Zealand. 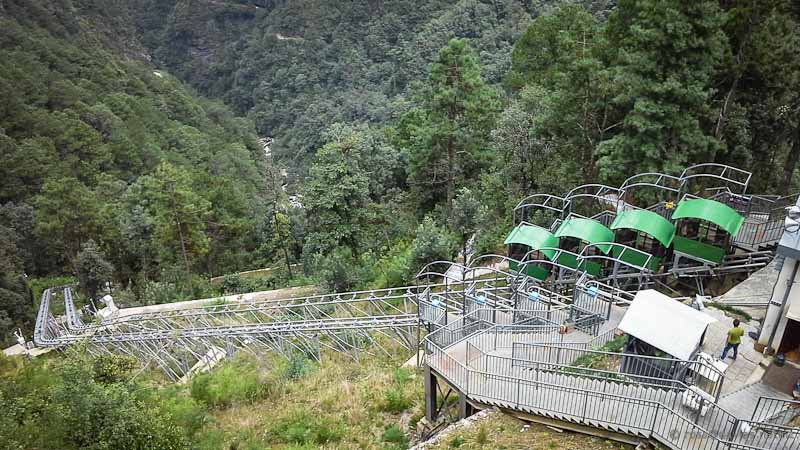 From the Funicular/Cableway Station another cableway disappeared up into the clouds carrying passengers to about 4,000m on the top of the mountain/range. It wasn’t worth the price on this day but on a clear day could be spectacular. After admiring the views from where we were, we bought a cableway ticket and headed down. 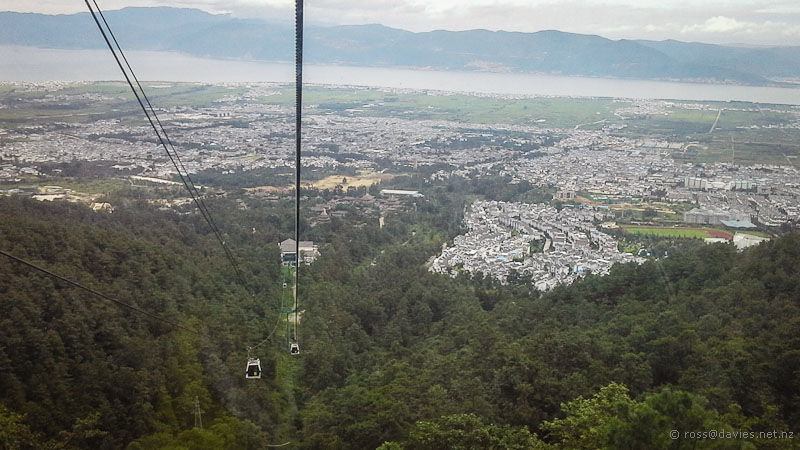 Gondola back down to Dali. Dali Old town in the middle with Erhai Lake beyond.

In the photo above the rectangular boundaries of Dali Old Town can be seen delineated by dark vegetation as a rhombus shape; the thickest gondola cable cuts through it. Just beyond the gondola terminal building and before the lighter coloured earthworks is a bunch of historic-looking buildings. They are actually a film set, somehow connected with Korea. Given that they still exist I’m thinking it is some sort of permanent film set.

I was confident that we could walk back to our guesthouse from the terminal building. We had a map of sorts on my tablet with a GPS pointer. There was some sort of track marked that looked like a good shortcut down the hill. It took us through the earthworks which was a bit weird. The trucks looked like army trucks so we didn’t like to be looking. Plus there were horses and at least one car which was also strange given how unofficial the track looked. Beside the track there were overgrown stone walls but no buildings – clearly something had been there once that wasn’t there now.  We’ll never  know what. 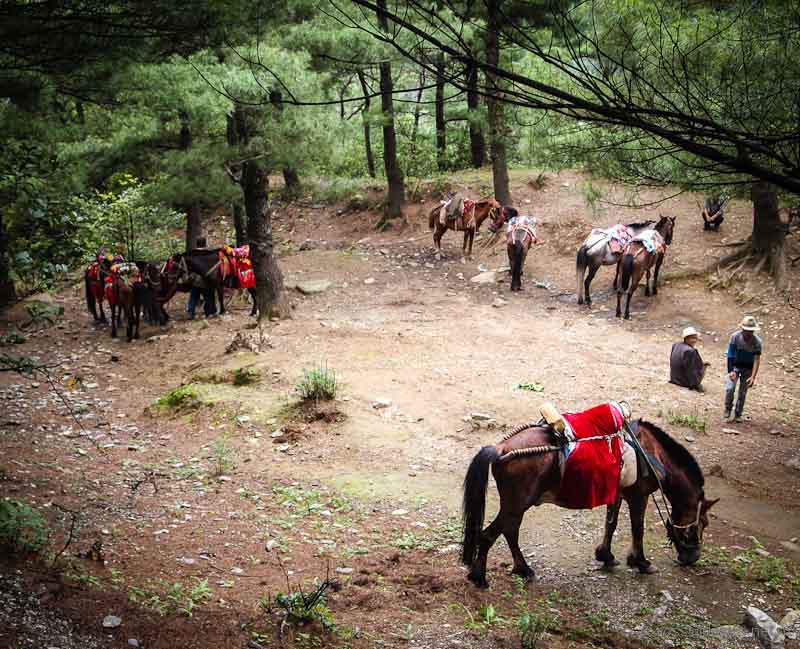 I loved the colours of the blankets on the horse/mule animal things. 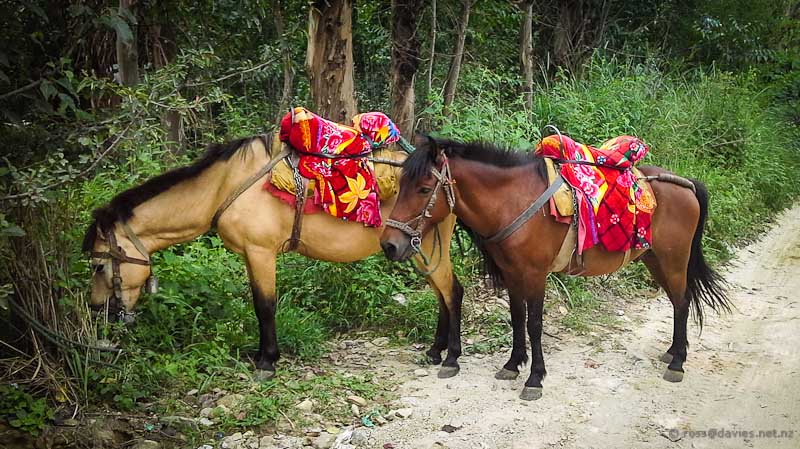 The map worked and we emerged beside the (approx) six-lane highway that we didn’t have to cross because we were on the right side of it. Walking down the road to our guesthouse we came across this old reservoir beside the road. A band of rain was threatening from the mountains but it missed us. 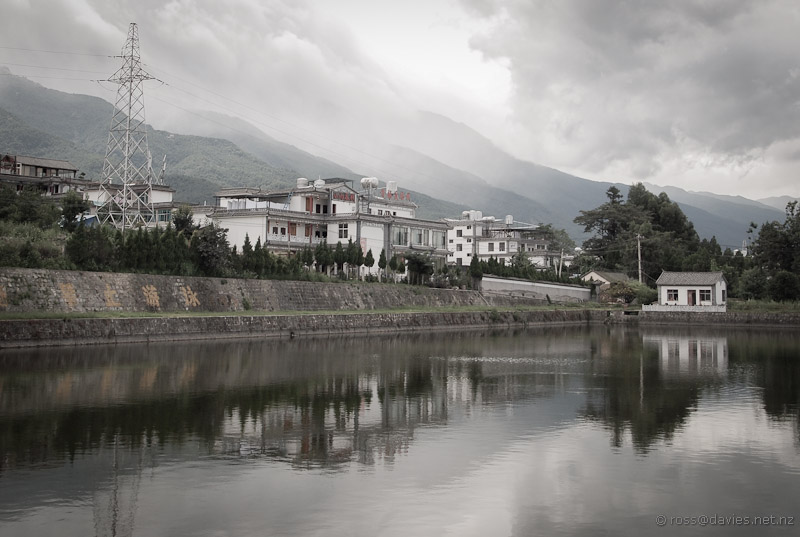 It was fun to look up the hills and think that we’d been up there and managed to find our way a short way along the range and then all the way back home again. It wasn’t like uncharted territory or anything. Just that we started the day without the chart and found it as we went along.