Night trains that arrive before the day starts are a bit awkward. Where the heck are you supposed to go? We were in the carpark/taxi park area of the Xiaguan Railway Station. It was 5am and still firmly dark. We had a reservation for that afternoon at the Jade Emu guesthouse about 30 minutes away at Dali, adjacent to the old part of Dali called Dali Old Town. Simple enough.  Xiaguan in the new city part of Dali. Are you keeping up?We struggled with it all. In China they might just build a whole new city near another one and all sort of joining up and with a completely different name. Which makes travel arrangements a bit confusing sometimes.

The taxi touts had almost given up on us when we stopped playing hard to get and produced the name of our guesthouse, all in Chinese characters, along with the address. This often resulted in great confusion but this time we got lucky and someone knew just where we were wanting to go. And soon had us bundled into a fine old taxi, a WWII VW Santana by the feel of it. Wyn was a bit concerned for our travel packs in the open boot but we didn’t really get enough speed up to put them at risk.

We headed west and then north on streets and sort-of motorway. We were conserving fuel which meant coasting in neutral  down anything remotely down. Soon enough we were in a walled alley at a big gate that seemed to be our guesthouse. The taxi driver buzzed the buzzer and someone appeared who let us in to the dark courtyard. And indicated we were welcome to wait there. At least there was somewhere to sit.

Eventually people started appearing and someone checked us in and it turned out that our room was ready to go. Which was a wonderful bonus. Soon enough we were settling down in our room washing the train journey away. 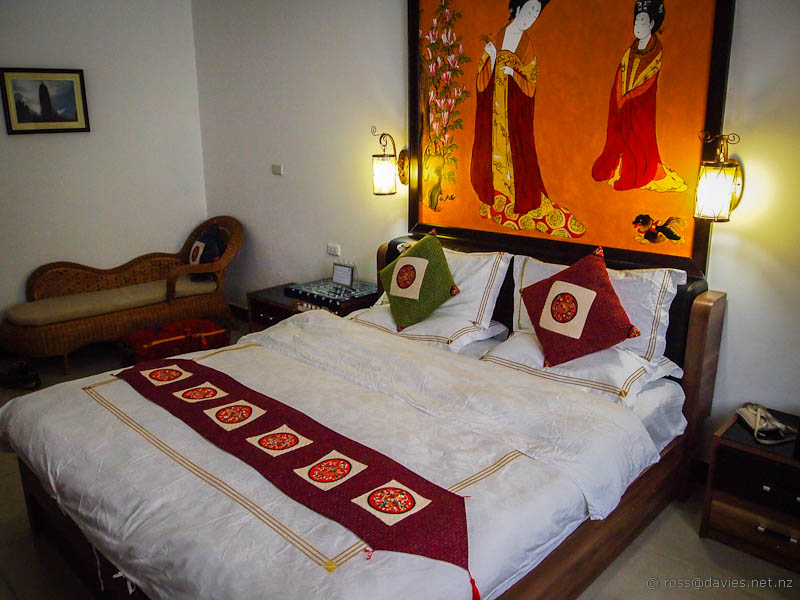 The rooms had dynasty names rather than numbers. We were in the Tang dynasty. 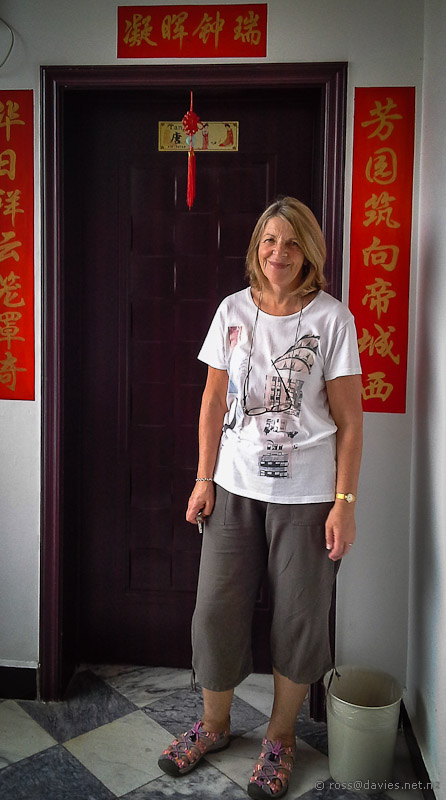 Eventually we emerged for some breakfast, all very relaxed and civilised. We were going to enjoy the guesthouse concept. 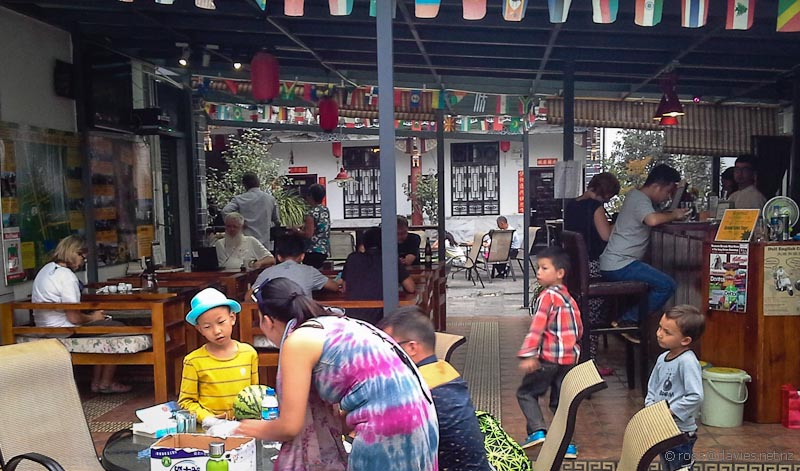 It was probably a plus that the guesthouse was a little removed from the Old Town. And perhaps a minus that the main separating feature was a six-lane highway. Approximately three lanes in each direction with a median strip for refuge. Exactly how many lanes was a bit variable; it depended on the daring/nerve of the drivers. The road rules were simple enough. Big trumped small, fast trumped slow, expensive trumped cheap. Black trumped any colour or white. So for example you didn’t push your luck a big black zooming SUV.

As a pedestrian you had to let the Force be with you plus make no sudden movements like stopping once you’ve started across. Wyn was better at it than me. I would cower behind/beside her and try to keep up. We mostly got used to it but you had to have your wits about you. The wild cards were electric (almost silent) scooters hurtling the wrong way up the road coming from the direction you weren’t looking. We never fully got used to this idea which was probably a good thing.

We  headed off for some exploring of the Dali Old Town. There were lots of tourists and mostly no traffic; no cars or trucks anyway. And not so many scooters. 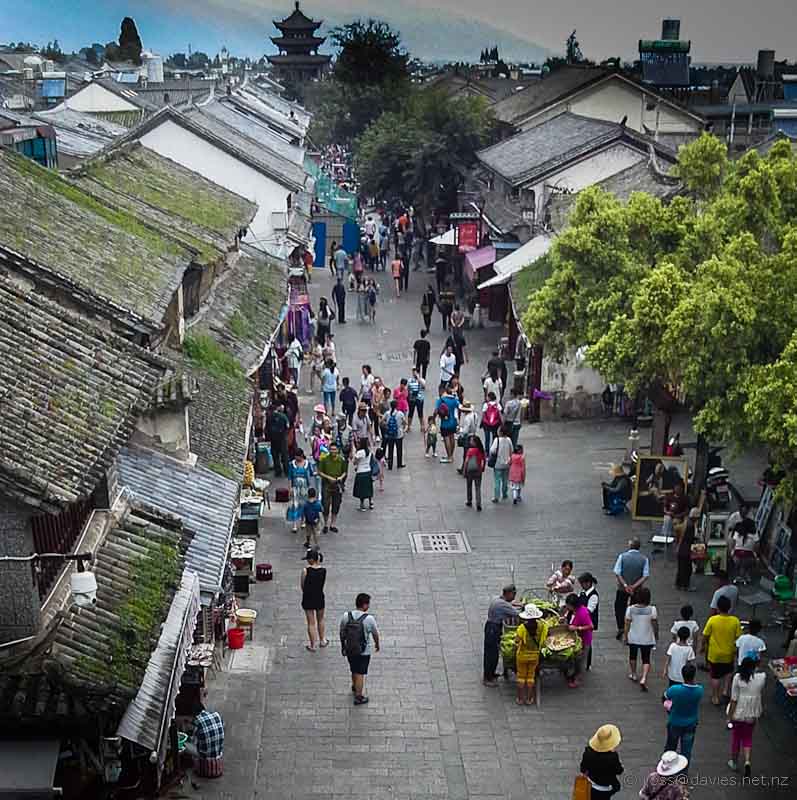 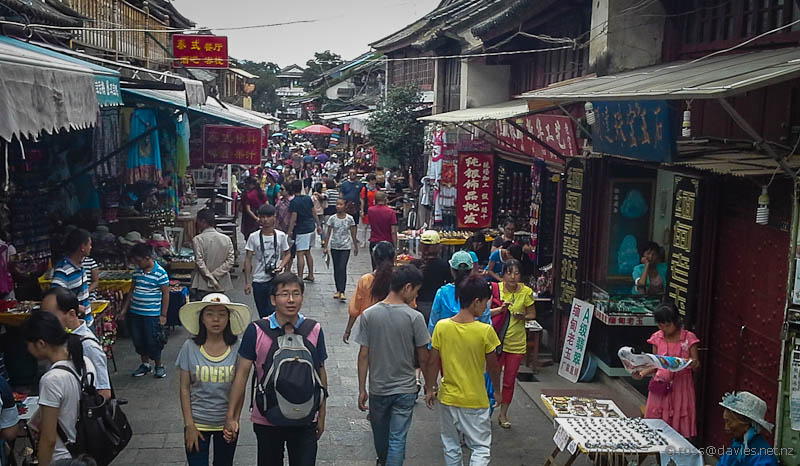 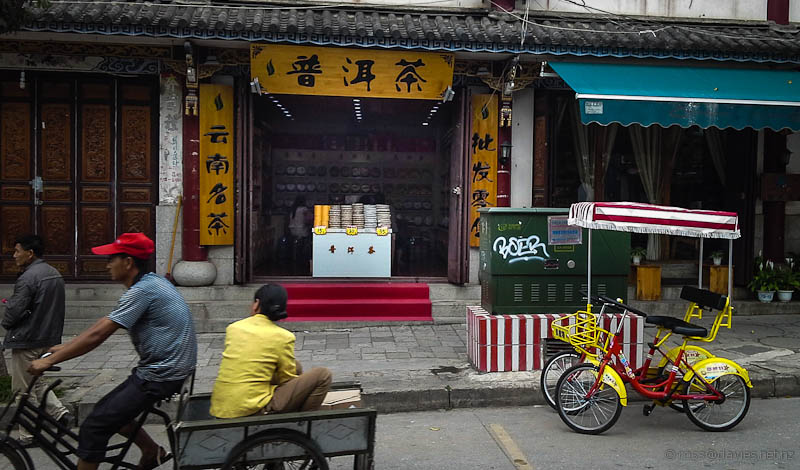 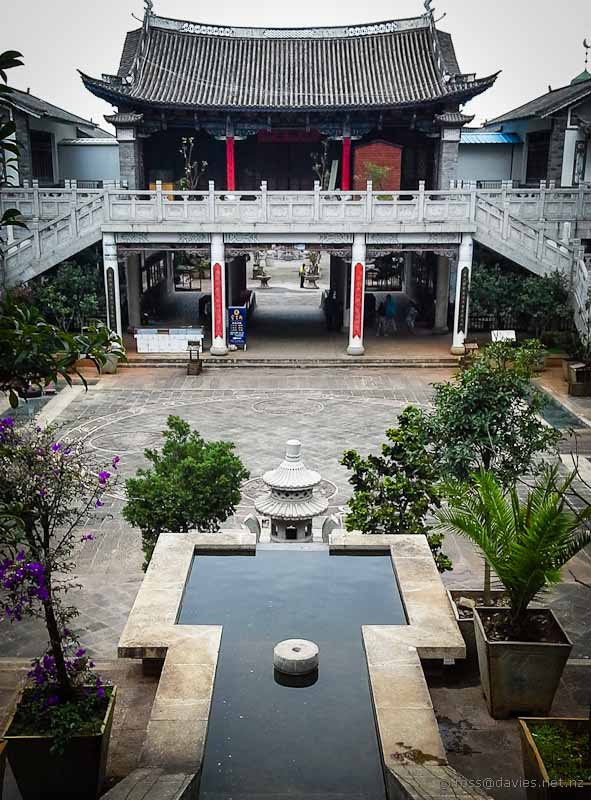 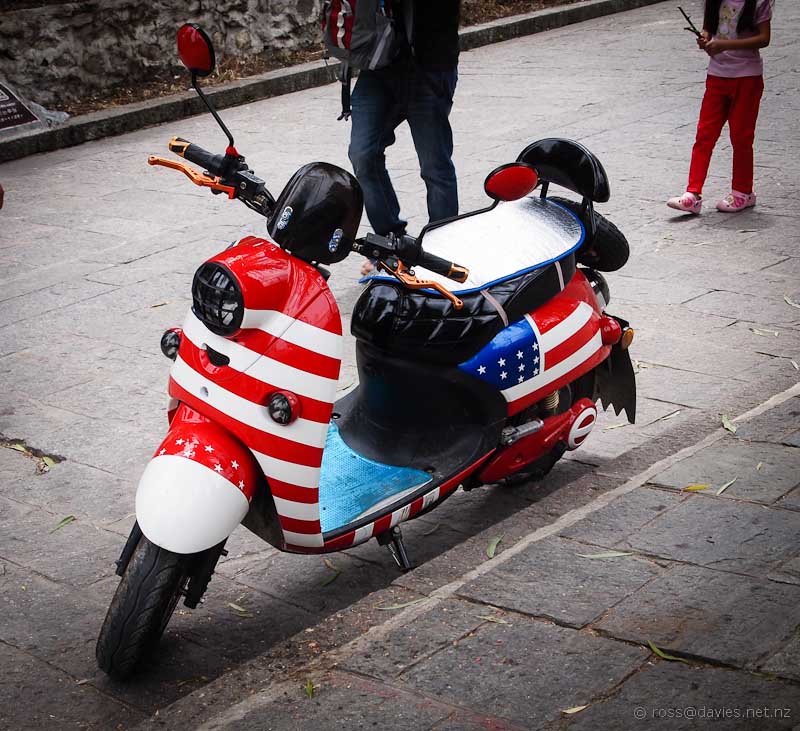 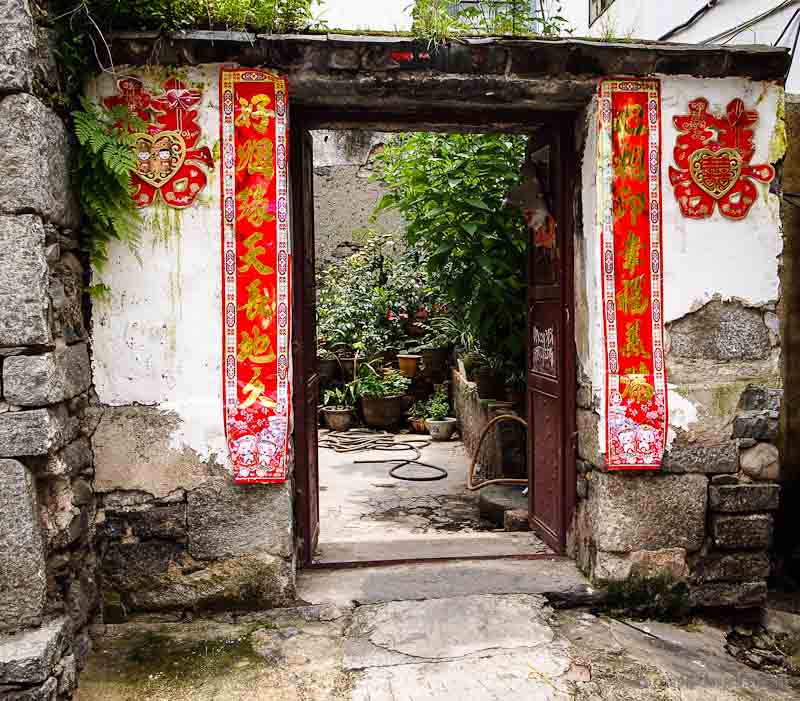 Behind the Old Town looms the Cangshan Mountain range. Lots of deep-cut valleys in a range the rises to 4122m asl. Dali is at about 2,200m asl so we could blame our lethargy on the altitude effects. 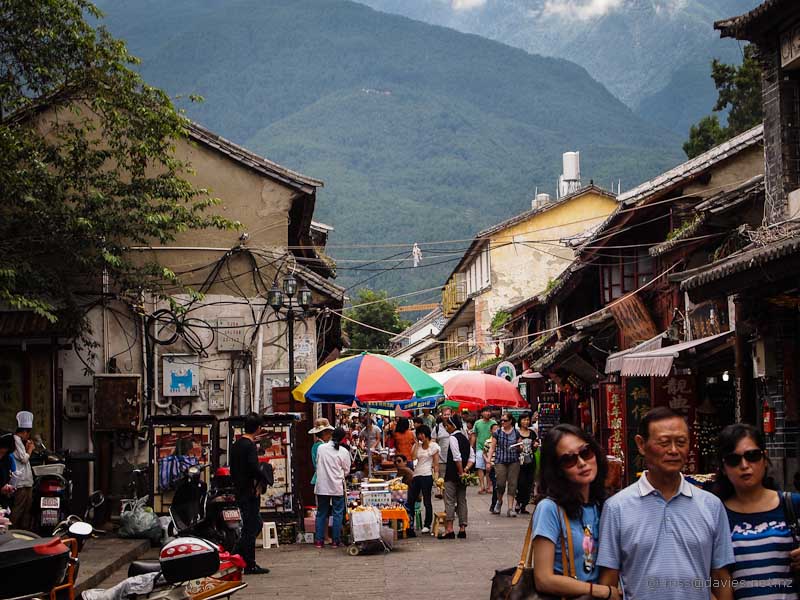 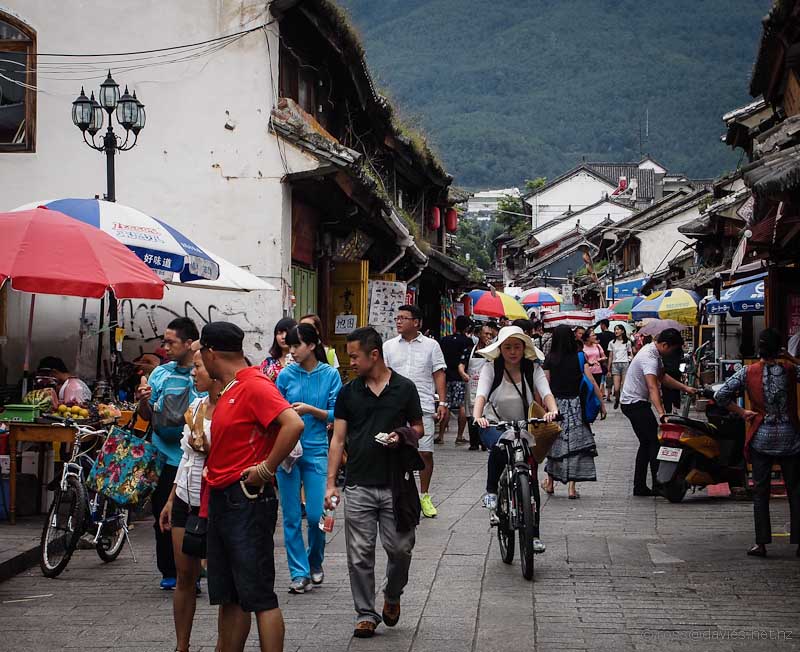 The Old Town walls were a good vantage point for checking out the houses and shops and guesthouses within the walled Old Town. I like the design and “land”scaping of the one below. 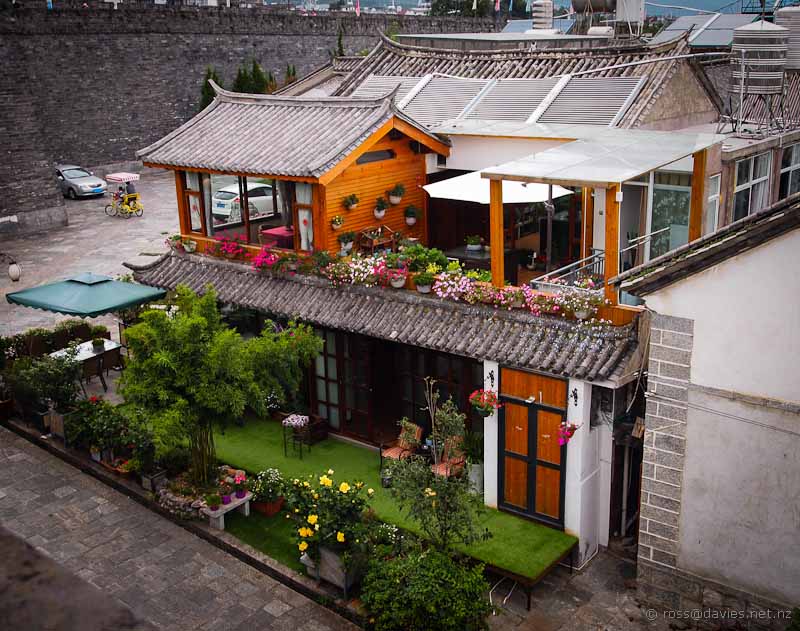 Just outside the gates of the walls where the tourist buses dropped off their tourist loads there were interesting scenes. 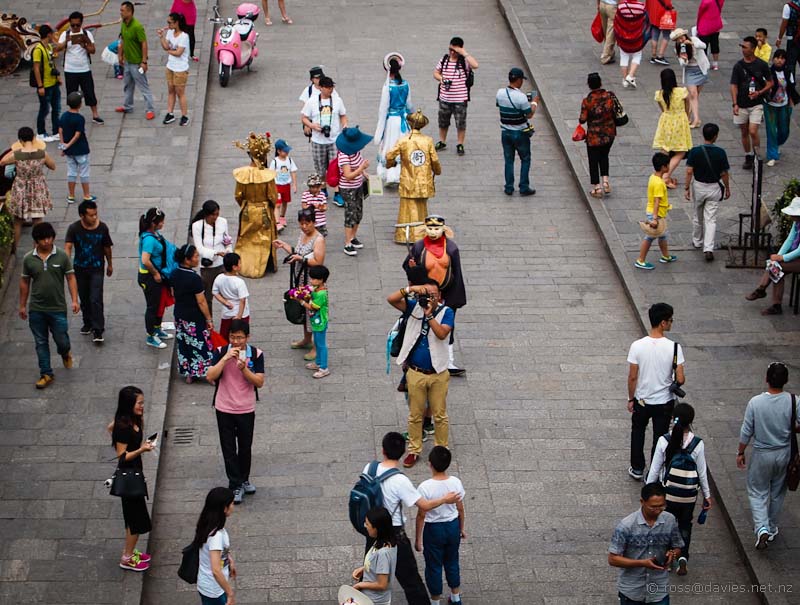 We were struck by the big numbers of solar hot water heating systems throughout China. 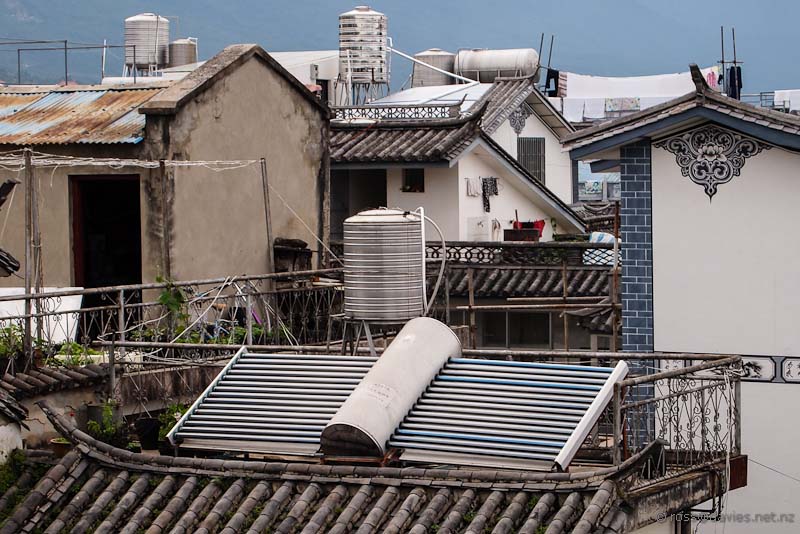 Later in the evening we returned to the Old Town for a meal, and a beer. Beer was generally cheaper than coffee, tea, soft drink, and sometimes on a par with water. What were we to do? 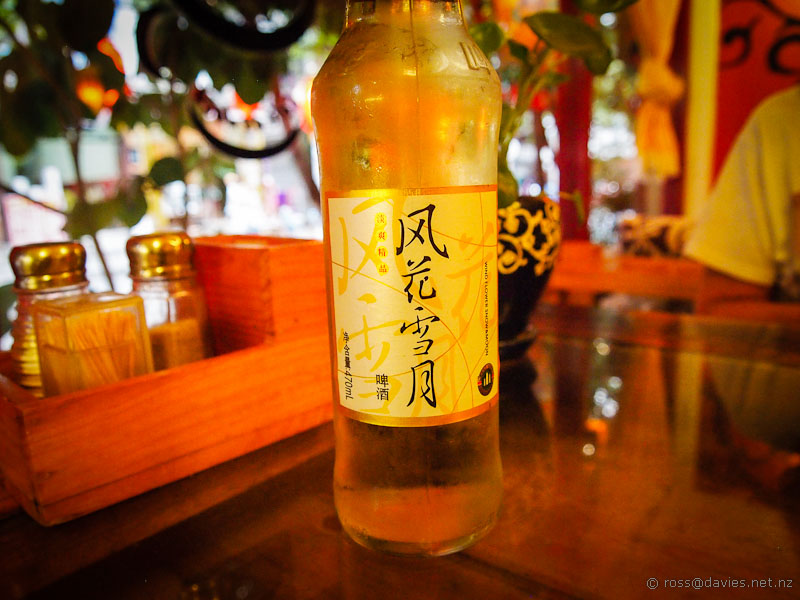 Dali beer – coolest bottle in both senses of the word

Strangely, at night they let the cars and the motorbikes into the pedestrian streets. So it wasn’t as relaxing as in the daytime. 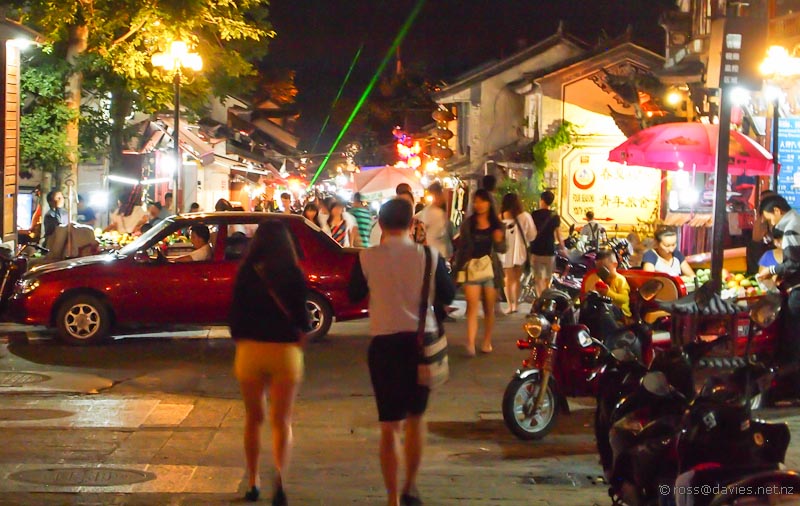 But it was more picturesque. 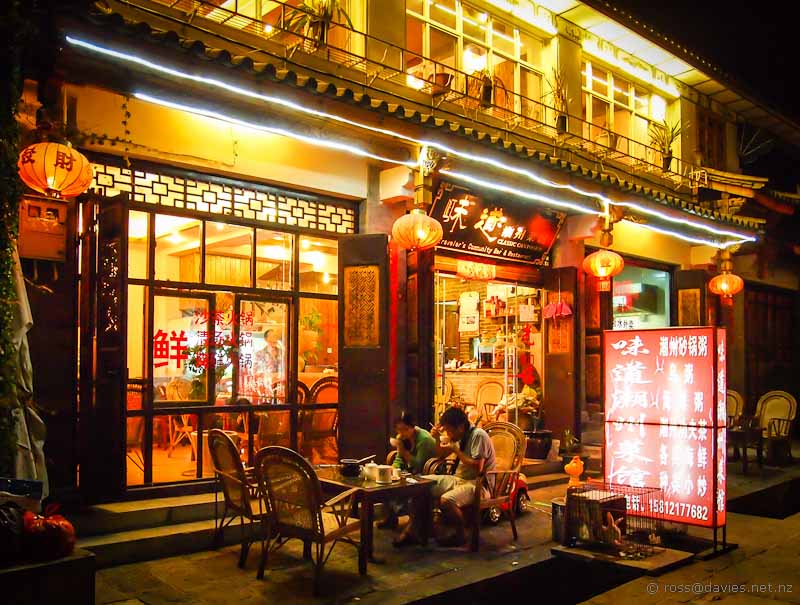 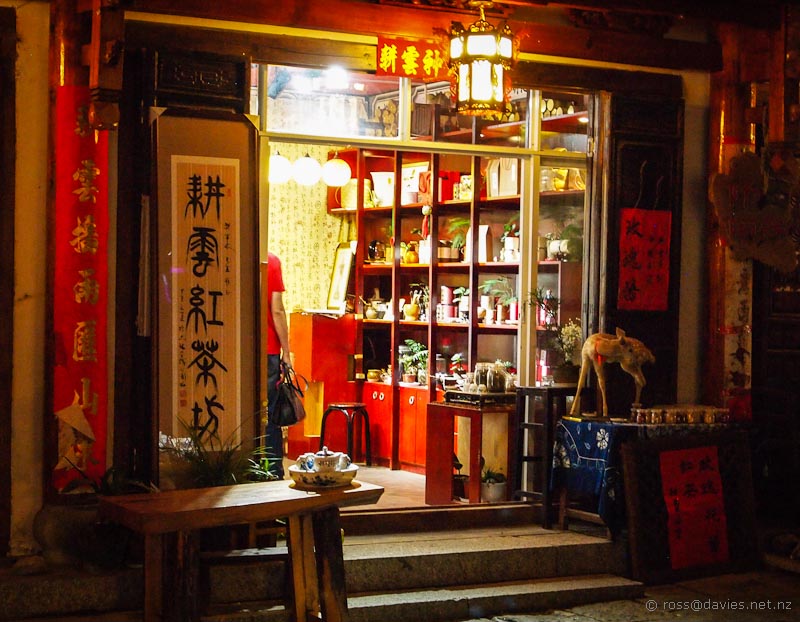 We didn’t linger much. It had been a day and a half since proper lying down in a proper bed and that six-lane highway didn’t keep us from ours for long. It was  good to be in Yunnan and it was going to be good to catch up on some sleep.