So there we were, rosy and relaxed in the plane from Shanghai to Kunming. Trying to work out how we’d been so lucky to even get there. We knew we owed the God of Travel. After that we always turned up early and never complained about waiting around – hoping to pay down the debt. Had we not been forced to use the air-bridge when we arrived in Kunming we’d have done that Pope thing and kissed the tarmac. We’d have had plenty to choose from – she’s another big airport.

And another new airport. It’s only been open a couple of years – they are going to demolish the “old” one. This one can handle almost 1,000 planes per day and 33 million passengers per year. It’s the 4th biggest in China. That’s more than all the passengers at every airport in New Zealand but then again Kunming has a population about twice that of New Zealand.

I expected China architecture to be grey, utilitarian and boring. I couldn’t have been more wrong. Many public buildings are stunning. Think of our airports in New Zealand. Can you think of anything imaginative with any of them? 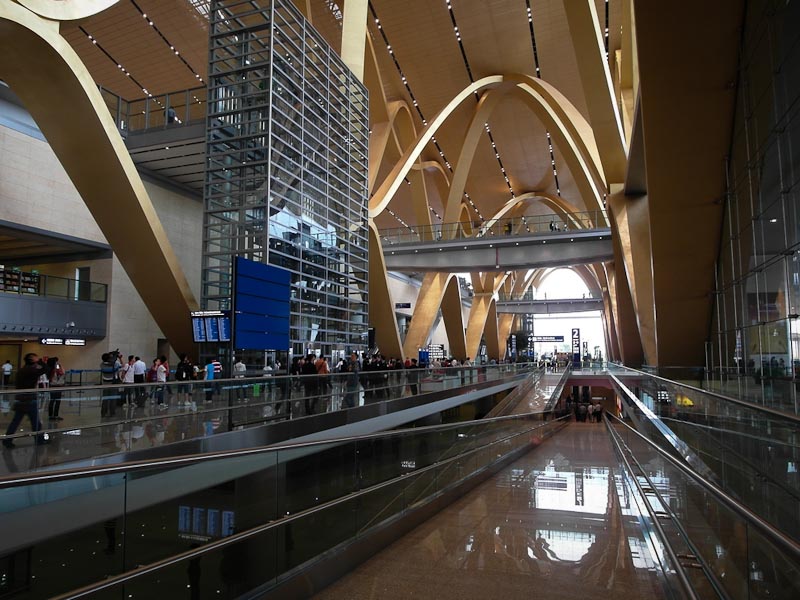 None of the photos in this post are mine. I think my camera was a bit overawed. I’m thinking the one below must have been taken before the terminal opened for use. 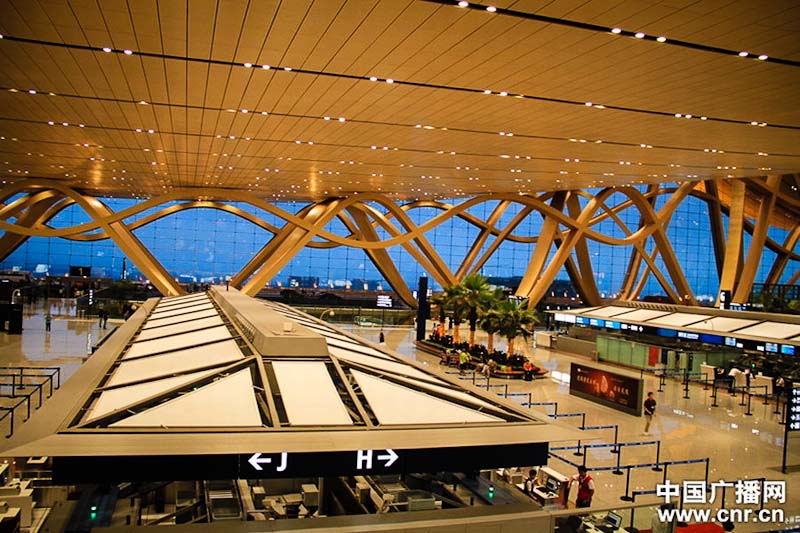 Again the picture below looks deserted so it too must have been before the terminal was operational. It’s a lovely bit of big building whenever it was taken.

Kunming is the capital and main city of Yunnan Province. Yunnan is what brought us to China. Three years ago when we traveled in South East Asia our guide book was based on the Mekong River, which actually flows most of the way down through Yunnan. We considered then getting between Laos and Vietnam via Kunming as both countries border southern Yunnan. We didn’t, but we’d read a bit about Yunnan and it sounded like an interesting place to visit. Hence this trip to China. Which grew to more than just Yunnan but that was our initial interest and remained our focus.

We’d decided Kunming was somewhere we could skip through; we’d see a few big China cities. So the plan was to get a night train out the day we flew in. The trains are popular in much of China and we’d not managed to get the exact train we wanted or the class of travel we hoped for. The best we’d been able to book was a train that arrived in Dali at about 4.30am, and the only sleeper option were hard sleeper. Since it was all that was available, that was going to be our lot. Plus we only had an on-line reservation; we had to exchange that for actual tickets before we could go anywhere.

So we got a bus from the airport to the Kunming Railway Station at somewhere around 5pm, not sure where to start with our ticket quest.

It looked nothing at all like the photo above. The station did, but the sparse crowd is hard to reconcile with what greeted us when we got there. “Throng” would be more accurate. Somewhere between a riot and a rugby crowd. There were hundreds and hundreds of people everywhere. All heading somewhere. We just had to figure out the system. Plus security was very tight. For good and sad reason. Just last April about 8 masked people went amok with knives in the ticket office and killed 27 people and injured over 100. So there was a security check to get anywhere near the station and then another to get into the station proper.

We didn’t mind in the slightest. The more police and soldiers the better as far as we could see. We eventually found the ticket office and joined one of the slow-moving queues. Some of the queues were at un-staffed windows so we chose a staffed queue. Until the staff person closed the window and disappeared. Except the people in the queue didn’t move. I joined another queue that was moving and eventually Wyn worked out that some of the information above each ticket window included the time of the staff tea break! Luckily we were not in a hurry and eventually we got to the head of one or other of the queues.

Where the person could see we only knew one word of Chinese so went off and found someone who knew several words of English. They were very patient and tolerant and helpful; something we found almost universal on our travels. We eventually doubled our vocabulary to two words and it was never much of a problem. Finally our on-line reservation was converted to actual tickets and we could go through another security check into the actual station.

The photo below must have been taken on a quiet day. Or maybe it is busier at night with the sleeper trains being popular. There were about 4 waiting rooms, each with a number of gates to platforms. We knew what our train and gate number were so were able to keep track of our departure. The signage was perfectly adequate. 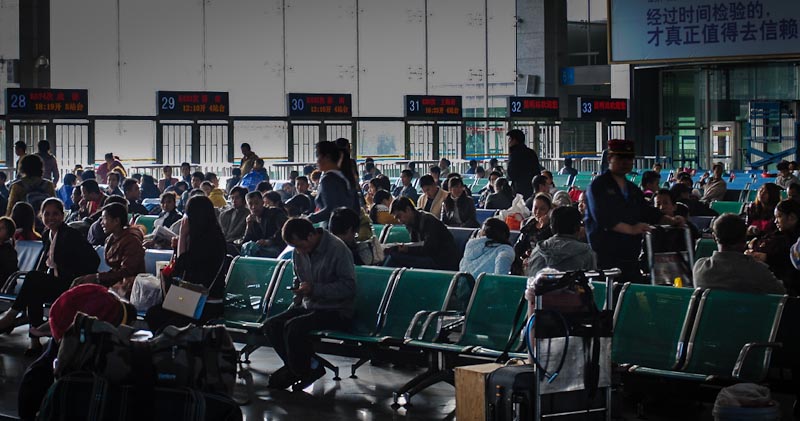 While it was all very busy, it was also highly organised. And efficient. The trains ran on time. All the boarding was to a timetable as well. Boarding announcements lead to a stampede which usually made me think of 100 loose forwards trying to be first to the next ruck. We got good at the game, anticipating which way play was going to go and often managed to be in the right place in clear air.

There were lots of ticket checks which reassured us that we were heading for the right  train – there seemed to be lots of them. Although I did manage to misread the ticket and we spent half an hour in the wrong carriage. 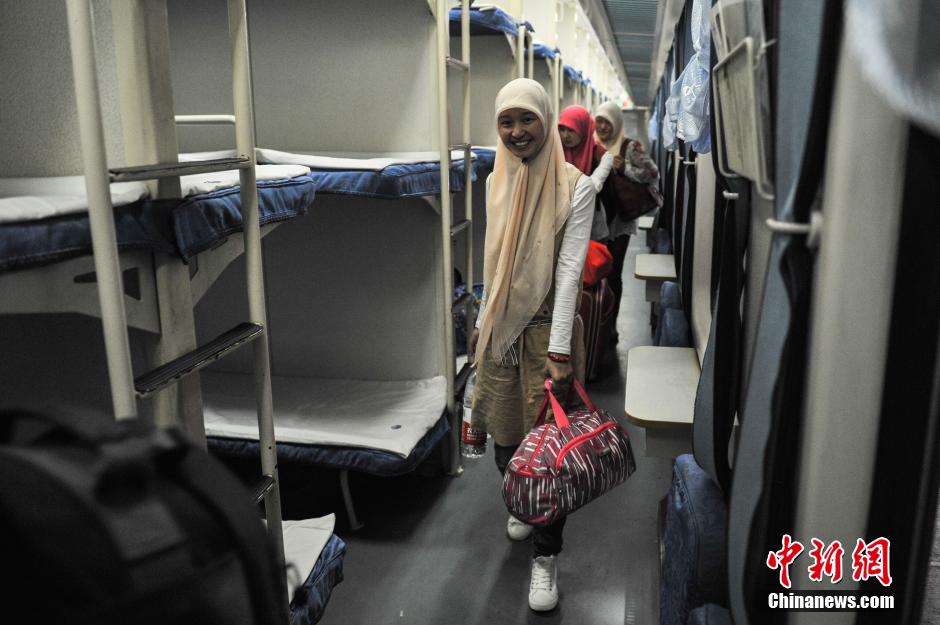 The photo above is a good one of a Hard Sleeper carriage. Soft Sleeper is more expensive and has compartments for 4 with two bunks either side with much thicker mattresses. Hard sleepers have a very thin mattress, are open plan, and have three levels. The best our agent had been able to secure for us was a middle bunk and a top one in a Hard Sleeper. I drew the top one and it was not much fun. It was close to the ceiling and thus hard to manoeuver around. Even the middle bunk required using the ladder to get up and down.

It wasn’t our best night on a train. And it was over before the night was. At 4am the lights came on and someone came around to rouse us up. We assumed it was our station coming up, so we got up and prepared. The train was going on further so we didn’t want to get off in the wrong place. It was about 4.30am when we got off, and we had no idea of how we were going to get to our guesthouse . We dawdled as best we could, thinking we might be allowed to loiter somewhere. No such luck. By about 5am we were herded out of the station into something of a taxi/car park and left to the mercy of the taxi touts. It was still dark. We still only knew one word in Chinese. So began our adventures in Yunnan.