How Not To Catch An Aeroplane – Shanghai-Style

Some days you don’t know it when you wake up but you are going to be very unlucky or very lucky. Our day leaving Shanghai turned out to be one of those. It started out nice and relaxed. We went for a walk around the corner from our hotel to check out the early-morning action in the pocket-park we’d spotted on the first day.

Like so many public parks in China there is a range of outdoor exercise equipment which is used by the oldies to keep themselves going. Plus groups of mainly women doing Tai Chi for the same reason. Plus groups of mainly old men sitting chatting and checking everyone made it through the night. It’s funny how living in such a huge city can be so sociable. It was very relaxing to sit and watch. I couldn’t bring myself to take any photos. Somehow that would have been intruding.

The French Concession is a lovely part of Shanghai. Lots of trees and not much high-rise. 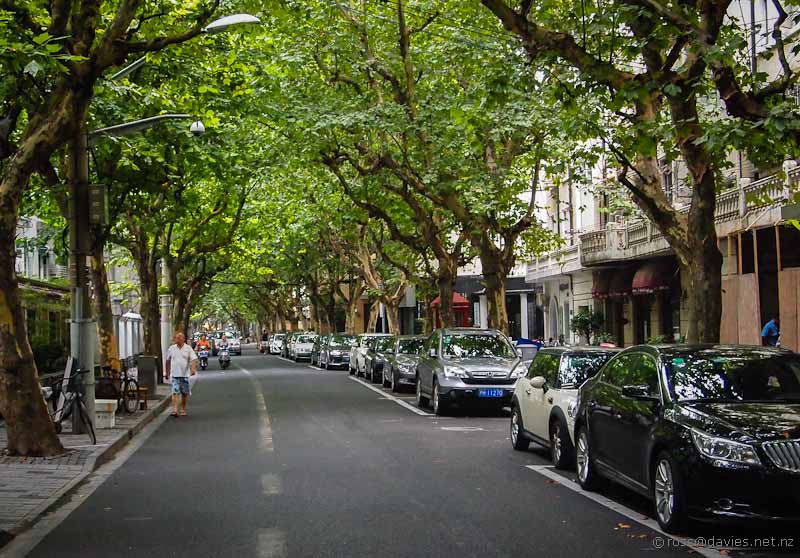 You have to hand it to the French. They mightn’t have been the most successful colonialists but they sure as heck left their mark. Tree-lined streets, cafes, bakeries … 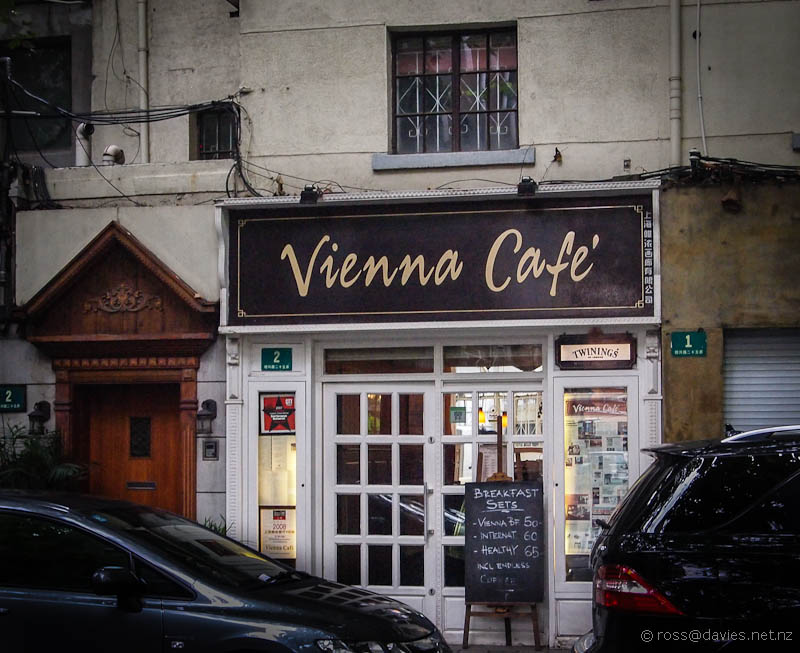 One of the pleasures of strolling through the streets is the glimpses up alleyways and through gates; of other worlds and things. 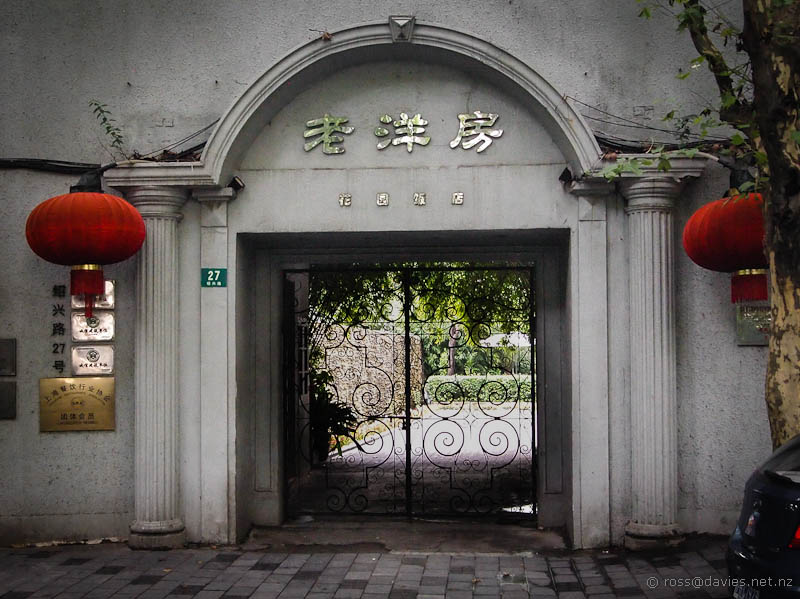 Our Hanting Hotel was OK. Good location. Nice outlook from our room on the 11th floor. But the reconstruction on the 9th floor made the lift a bit industrial. And the calling cards from the massage women slipped under the door each day were interesting. Perhaps the nicest feature was the lobby. 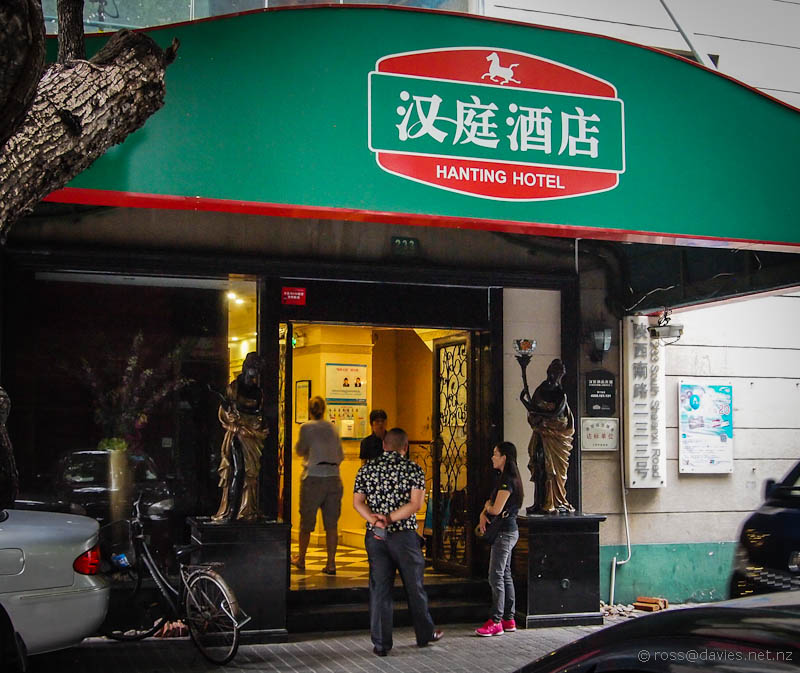 All too soon we dragged ourselves away from our people-watching in the park; back to our hotel and time to get packed up. All we had to do for the day was get ourselves to the airport and fly to Kunming about three hours West and catch a late-evening train north from there to somewhere else. How hard could it be?

We could have got a taxi from the hotel but that’d have been too easy and have cost about $25 or something. We had worked out we could do it on the metro/subway for less than $2 each. What a bargain. We couldn’t see how that could take more than an hour and a half. Mind you we didn’t know how early we had to report for our flight. All I had was an email from a China travel agency confirming that we had a seat. Maybe we should have allowed a bit more time. [Cue the ominous music]

So up the street we marched with our bags, and into the metro. We got our tickets to the airport and away we went. We had to change lines before too long and then we were on the train right through to the airport. Well that’s what the map showed…. The time started to tick by and there did start to look like quite a number of stops along the way. We briefly considered bailing out at the station where we could have transferred to the high-speed above-ground train but we didn’t.

By this stage we could hear the ominous music and see the time ticking by. It rapidly dawned on us that we had made a big mistake. All we could do was hang in there although we wondered about jumping out and trying to get a taxi but had no idea whether that would be any faster. We stopped at another station and most of the passengers got off. But not everyone so we weren’t alarmed.

But then the train started off in the opposite direction. This was definitely the time to panic. And wonder what on earth was going on. It turned out we should have transferred there to another train (on the same line) to get to the airport! Where was that explained? We were now speeding back to where we had come from. A nice young woman passenger explained this as best she could and said we’d need to go back again and then go “up” to catch the metro the rest of the way. So off we jumped at the next station, across the platform and onto the next train going the other way and back to the transfer station. Off we got there, in full panic mode by then.

There were signs to follow which went along but not up but we stuck with the signs and boarded the next train heading to the airport. All we could do was sit there and watch our watches tick by and hope there were not too many more stations. And plan our strategy for when we finally reached the airport. Which was simple. We got off as fast as we could, found a trolley and hurtled as fast as we could towards Terminal 2. Which was a long way but we could get along quite quickly with the trolley.

Until we came to the escalator. Doh! Time to abandon the trolley and shoulder the packs. At least Wyn’s had wheels. Up the escalator we came to the departure hall although “hall” does not convey the size adequately. There were about 12 different check-in areas, depending on which airline. We did a good job navigating through there, finding a board which explained that our airline was down the far end! Then halfway along there was a travel desk for our travel agency where we wasted a minute for them to explain that we had to continue to the airline rows.

Mercifully these were well labelled and our airline flight one had no queue. There was a good reason for that though. We were late. It was only 40 minutes before takeoff and it turned out we had to be there 45 minutes beforehand. I started to explain feebly that the only documentation we had made no mention of reporting time but that didn’t matter. The woman was a saint who cut me off with a simple question: “Did we want to catch the flight?” She was saying that we could carry our travel-packs on if we wanted to make the flight. Thank heavens for modest-sized travel-packs and check-in staff who are fully-fledged saints. I think the lovely woman saw the sweaty desperation and panic on our faces and took pity on us. Or maybe it was pity for Wyn travelling with such a gibbering idiot.

Next minute we had boarding passes and were hurtling onwards in what seemed the right direction. Except there seemed to be a considerable crowd queuing for something. A quick u-turn to the check-in desk confirmed that that was the crowd queuing for the security checks. My heart sank again as we joined the long line but I was hoping that our boarding passes were our saviours. I thought there was a reluctance to leave behind passengers with boarding passes but then I remembered that only applied to ones with luggage in the hold.

The queue was moving fast enough and they didn’t seem too concerned about our oversize “hand” luggage and then we were through and all we had to do was find and get to our gate. Shanghai Airport has over 70 gates spread over many kilometres in different directions. With good signs thankfully. Which just left the distance problem. So we walked and we jogged and we walked and trotted past gate after gate. Several electric golf cart things wizzed by and we wished we’d hired/commandeered one of those. We’d have paid anything.

We reached our gate just as they were beginning boarding – which meant they must have been a few minutes late – unusually. It seemed too good to be true. We zoomed straight into the queue and were actually some of the first to board. With our oversize hand luggage soon nestled in the overhead locker. And us red and rosy collapsed in our seats, drained and relieved. After that we didn’t care about anything although we were already resolving to never do this again. And we did appreciate the lovely seats in a lovely plane with oodles of leg room – somehow we’d been allocated an exit row.

We’d made it. We tried to work out how it had gone so wrong yet still worked out.  And didn’t want to contemplate how bad the alternative might have been. Some days you are going to be lucky, and occasionally very very lucky. This was definitely a very, very lucky one.

2 Responses to How Not To Catch An Aeroplane – Shanghai-Style