The Retrospective Tourists in Baisha China

I’d harboured hopes of a trip to Jade Dragon Snow Mountain up the valley from Lijiang but the cloudy weather ruled that out. There is a gondola or chair lift or something up to 4,500m and then you can walk up another 200m to see some snow and ice. But it was expensive and all we’d have seen was the inside of a cloud. Other guests at the Bruce Chalet were hiring bikes and getting out into the countryside so we decided to do the same.

I was a bit apprehensive about Lijiang traffic but it wasn’t a problem. There was even a cycle-lane once we emerged from the alleyways where we were staying. We headed up valley, bound for the next village, called Baisha. We’d heard of Baisha frescoes, without much idea of what they were. And an embroidery/calligraphy school as well. As we got closer to Baisha we saw signs with directions to the frescoes and we found the car park and inevitable ticket office.

The frescoes give a rare and valuable glimpse of daily life back in the Ming and Qing dynasties. No photos were allowed but I wasn’t too disappointed. Somehow the frescoes were a bit underwhelming. I was more taken with the 500-year old willow tree and the small forest called the SRMY Commemorate Woods. 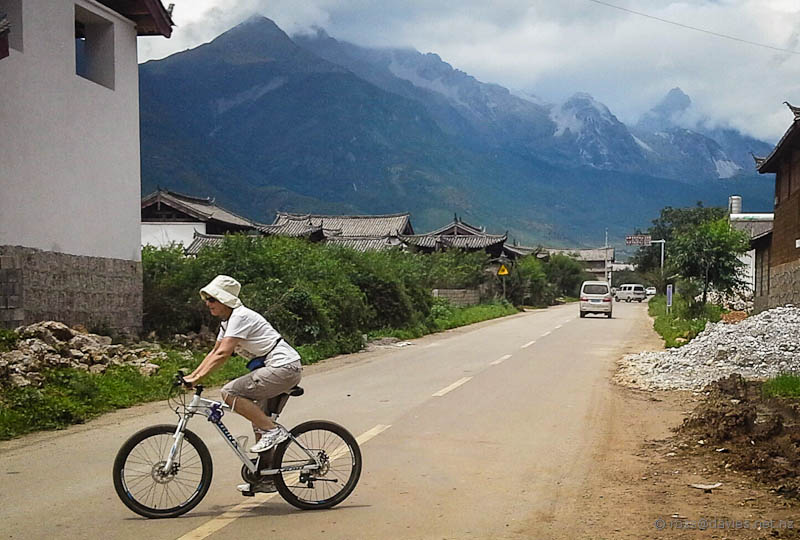 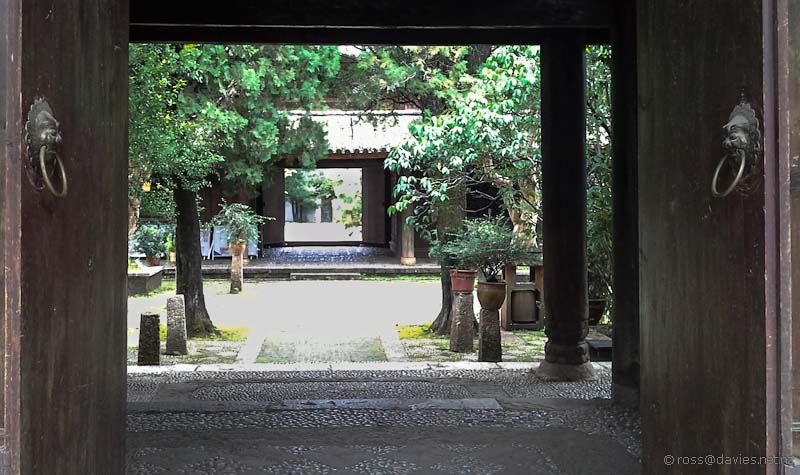 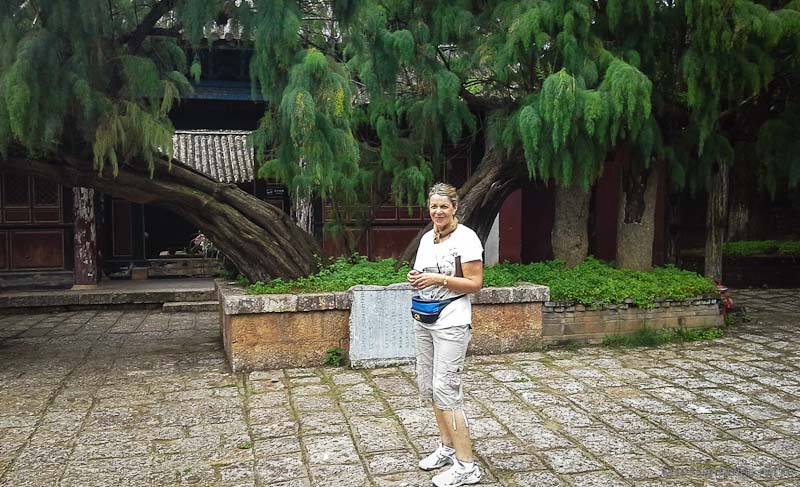 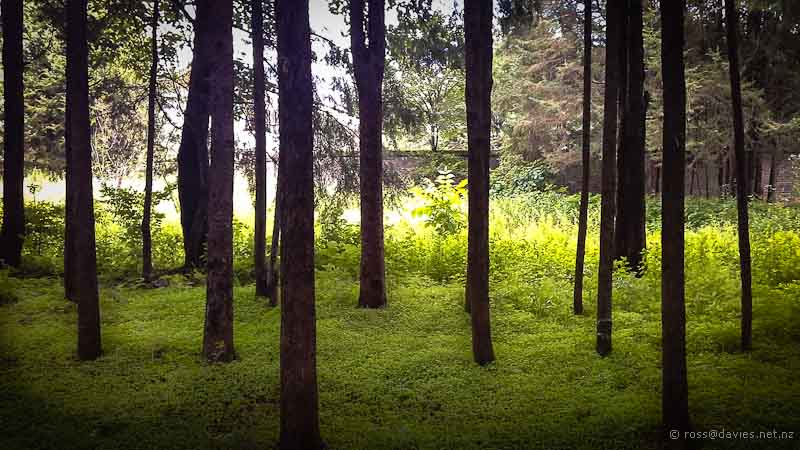 We rode off in search of food and refreshments. And stumbled upon a wonderful courtyard restaurant run by a lovely man with a book of handwritten endorsements – Tripadvisor eat your heart out. We did anyway. We followed all his recommendations including the speciality of the house – crabapple juice. There were quite a few restaurants and cafes in the area and this one looked the least likely. Yet something drew us there, and we were glad. It was a special experience. On the way out I photographed the various sign-boards in the street outside – I wanted to know where we’d been. 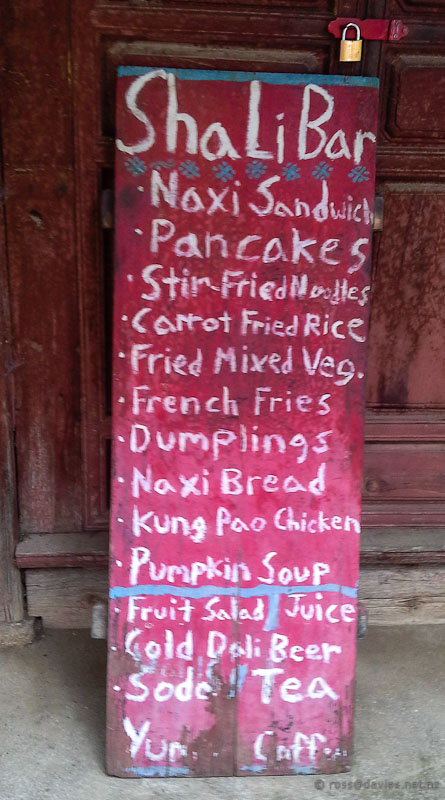 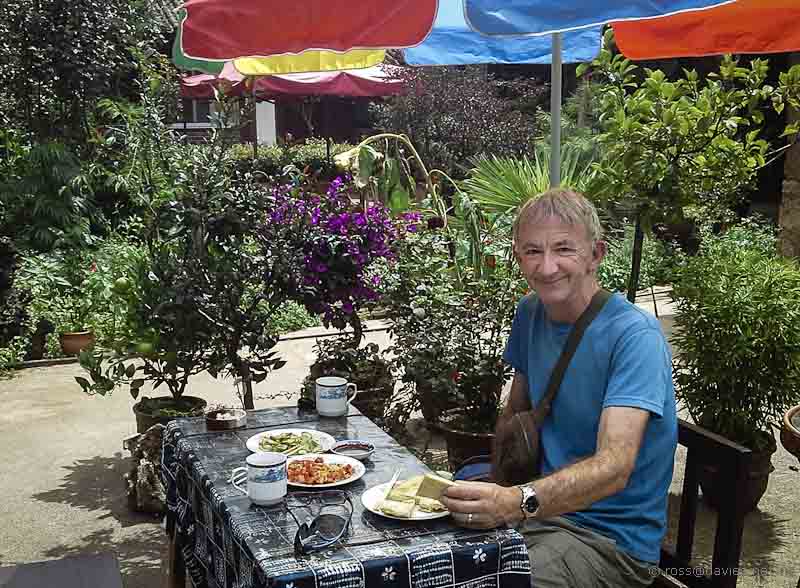 A google search yesterday revealed that we’d eaten at the Shali Book House. This is run by the younger brother of a late famous local author. And the same search indicated that just next door lived/lurked the famous Dr He, dispenser of cure-all herb teas. I wonder what he could have cured me of?

We headed on and found the Baisha Naxi Embroidery Institute. This is a relaxed sort of school for teaching local women the embroidery skills needed to maintain this exquisite art. These embroidered pictures take many months and are incredibly detailed. The threads are extremely fine – imagine a silk strand divided 64 or 132 times! Some are double-sided which does my head in just contemplating it. Photography is not allowed so it is difficult to convey the artistry. The subjects and styles vary but the skill is sublime. Some in a gallery was priced as high as US$18,000 and I thought that was likely a fair price. Had I a spare $18,000 I wouldn’t have hesitated. 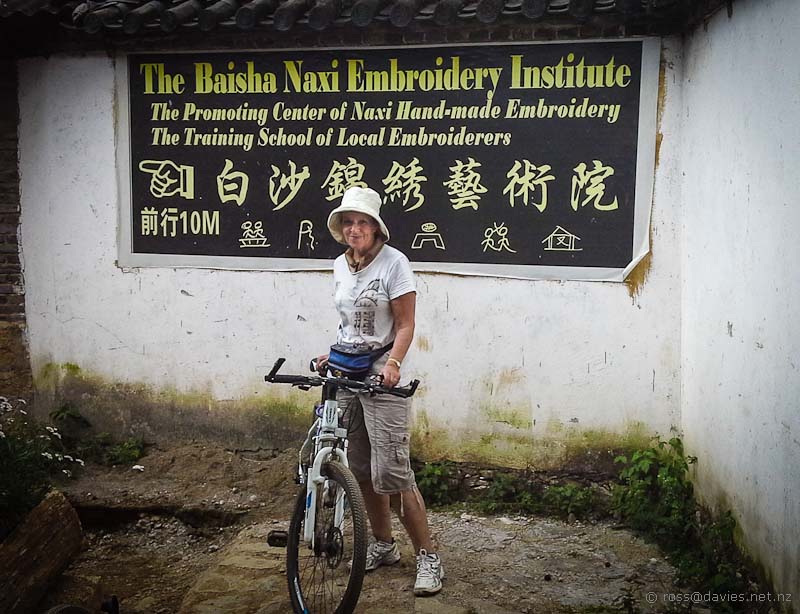 Baisha Naxi Embroidery Institute – note the hieroglyphics on the bottom row of the sign. 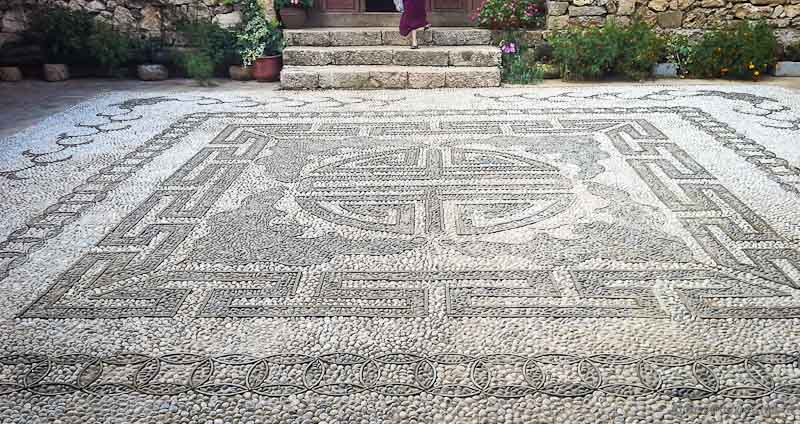 Most of the main streets and alleys of Baisha resembled something between a construction site and a disaster zone. It looked like some major infrastructure going in. The good news is that it is probably sewage pipes. The bad news is that this will probably allow a far greater influx of tourists to invade this little town. 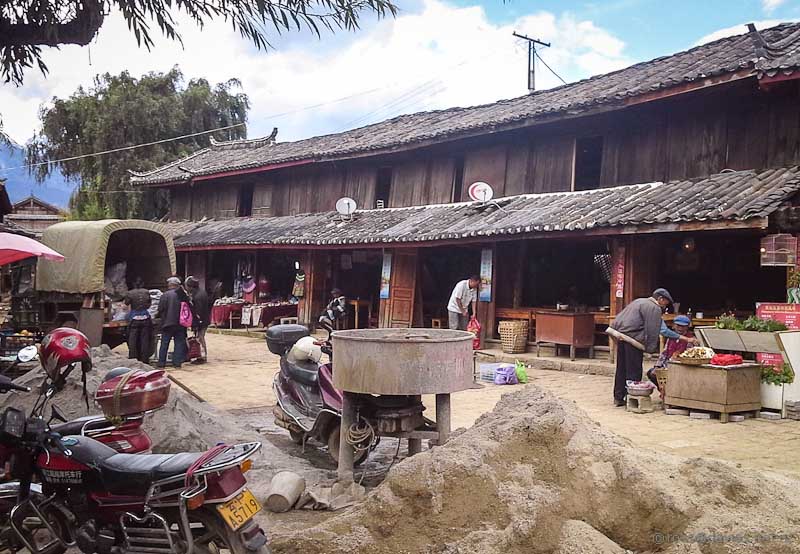 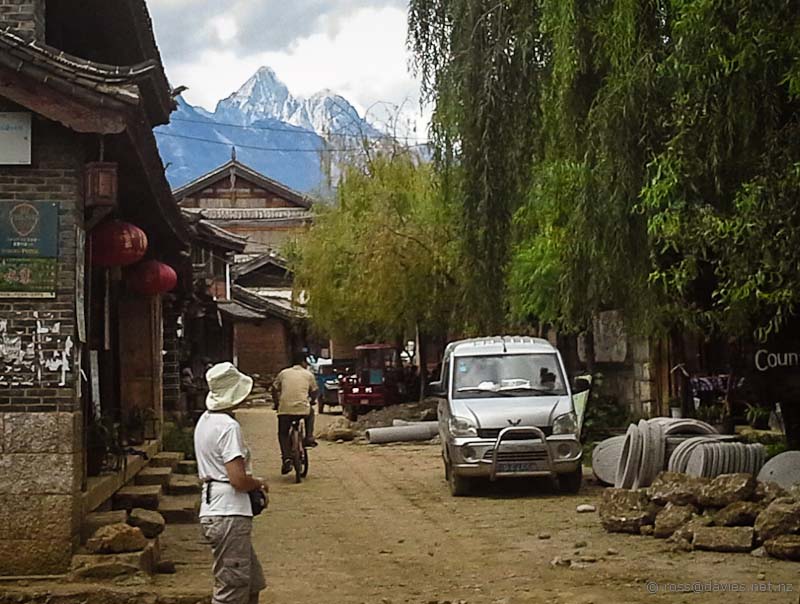 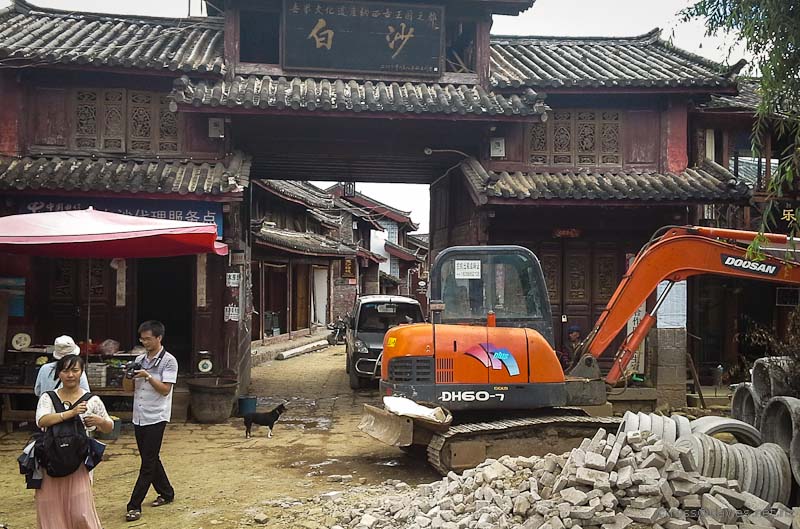 In Lijiang and Baisha we saw many examples of hieroglyphics; on signs, on artworks and on souvenirs. The hieroglyphics were simple, distinctive, and compelling. I photographed the building below as we left Baisha. Somehow I thought it might have been some strange graffiti or protest or something. I finally googled it yesterday and finally learned that this is known as Nakhi or Dongba pictographs – the only living hieroglyphic language. We might have heard of the hieroglyphics in the Egyptian or Mayan tombs but I never imagined hieroglyphics alive and understood in China today. I’m guessing the writing on the house below is part of some warding-off of evil spirits or bad event or the like. 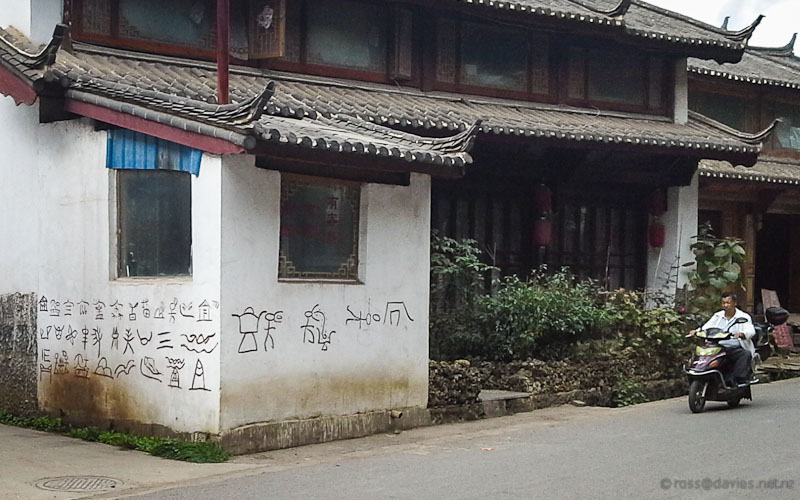 I don’t feel bad for taking many months to understand our day in Baisha better. We tried to read up on the places we visited beforehand. But sometimes it all makes a lot more sense afterwards.

The next day was wet. We’d been lucky with the two previous days and didn’t mind an excuse for being less energetic. I was keen to return to the streets and alleys of Lijiang and we did a bit of a circuit and once again patronised the Prague Cafe. 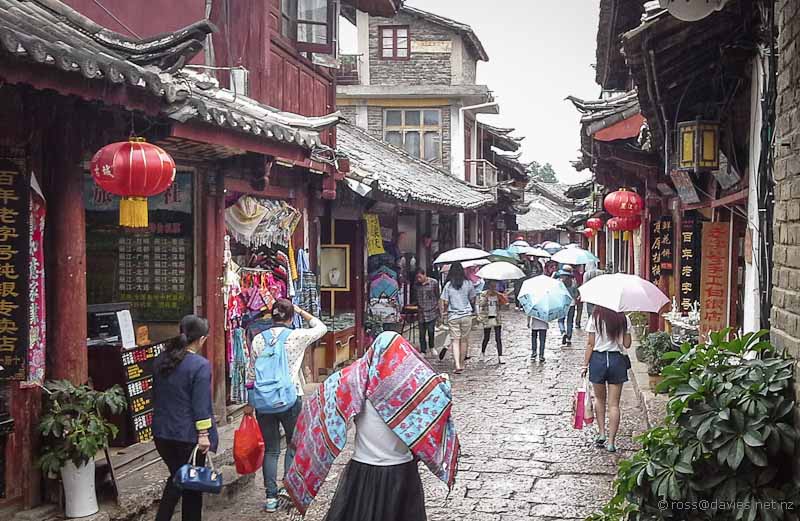 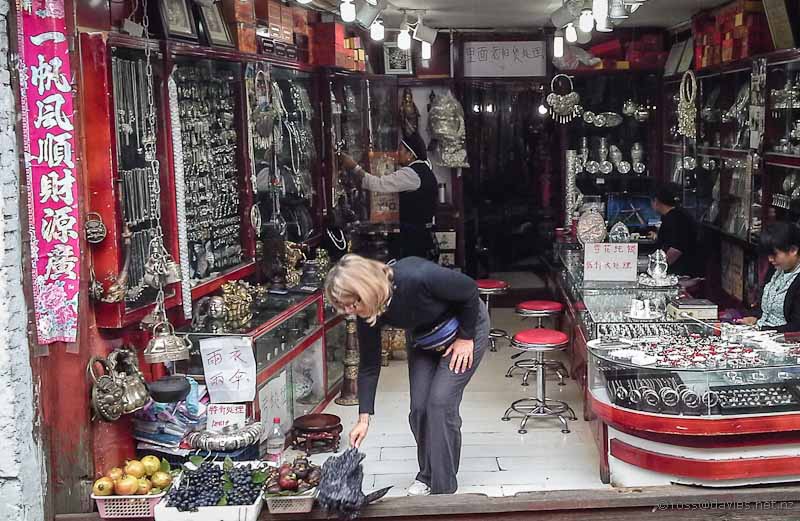 But our hearts weren’t really in the shopping and we eventually returned and retired to our guesthouse, already thinking of moving on up country.

1 Response to The Retrospective Tourists in Baisha China