From Lijiang we were heading north to Shangrila. In between is the Tiger Leaping Gorge and it would be wrong to not stop there for a walk or a look. There is a high hiking trail which sounded energetic and maybe not for us. Instead we hoped an overnight stop in the middle of the gorge would give us enough adventure and it turned out to be a good option.

This was definitely one of those trips where we struggled to learn the exact details, like exactly how far the bus would take us. Most information said to take a bus from Lijiang for about 2 hours to Qiaotou, a small town at the upper entrance to the gorge. From there the high trek started and we could get a minibus along the lower road that runs through the gorge. The road goes right through the gorge but we wanted to go only 20km to the guesthouse we had booked.

The bus trip from Lijiang was spectacular, climbing to get out of the basin and then dropping a longer way down to the river. This is the Jinsha River which is a primary source of the Yangtze River. The small bus was carrying mostly foreign backpackers heading for the high trail. 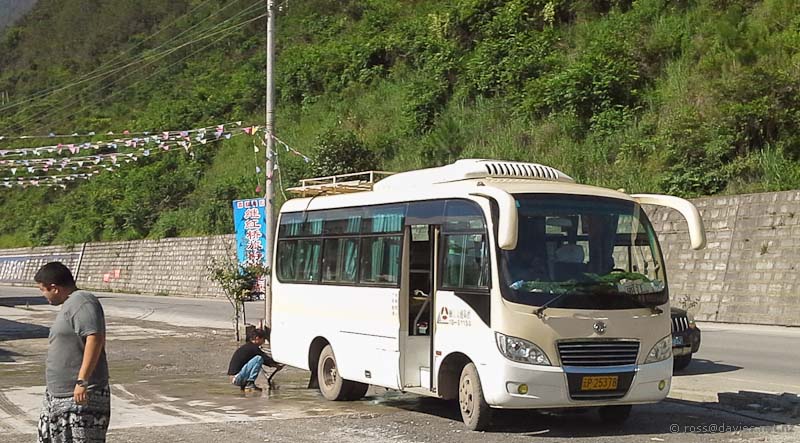 We traveled for some distance down the river, which was very big and very brown. It was rainy season upriver so the river was high; normal for this time of year. 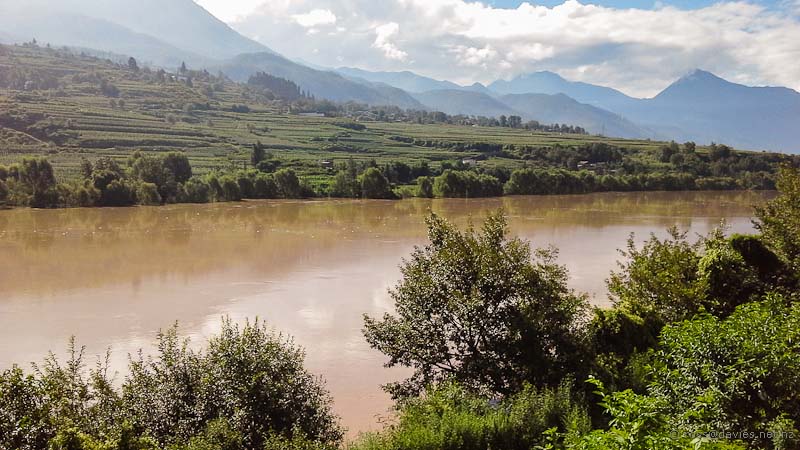 We arrived at Qiaotou and were all charged the standard gorge entry fee – about NZ$12. At this point all the trekkers got off to start their walk with a big climb. This left just us and a group of Chinese tourists on the bus and they indicated that they were taking the bus further on into the gorge and we could stay on too, for an extra fee. This suited us perfectly as we’d been unsure about onward travel anyway. They said they were going to the Middle Gorge, which Tina rules from her Tina’s Guesthouse and restaurant and bus service. Our Tibet Guesthouse was only 3km beyond there and we could walk that if we had to.

Almost immediately the road from Qiaotou headed into the gorge. It was sealed all the way, except for sections rebuilt through washouts or rockfalls. And it was spectacular, cut into the hillside which was angled at 45 degrees at least. Even at 45 degrees, looking out a bus window on the outside of the road, it seemed we were looking straight down hundreds of metres to the river. There were a lot of cars and tour buses that zoomed past ours when we were stopped paying our entrance fee and we were worried that we’d be sharing the gorge with many hundreds of others.

A few kilometres into the gorge we came to a huge car and bus park with a huge number of buses and cars packed up in it. Huge numbers of people were walking down from there to viewing platforms beside the river. Our little bus carried on through a short tunnel and stopped just up the road for us to have a look. Down below were the hundreds of people on the viewing platforms. And the roaring river. And across the river a parallel universe. Or more correctly an alternate viewing option; walking a couple of kilometres to a bridge and viewing platforms below. 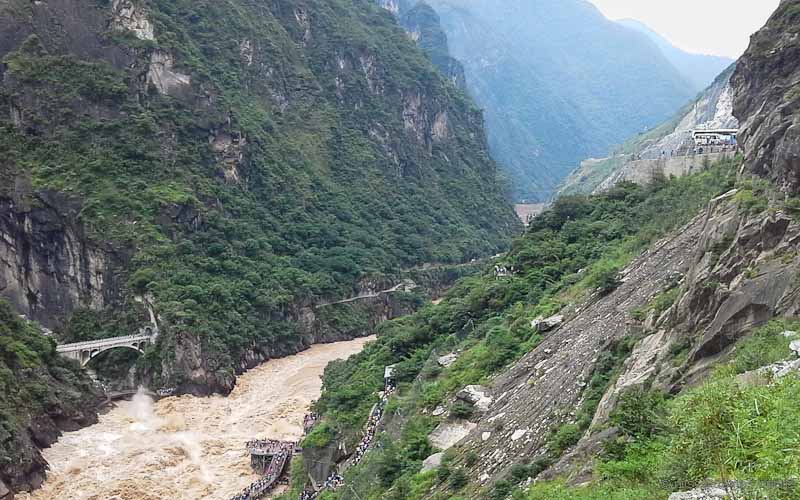 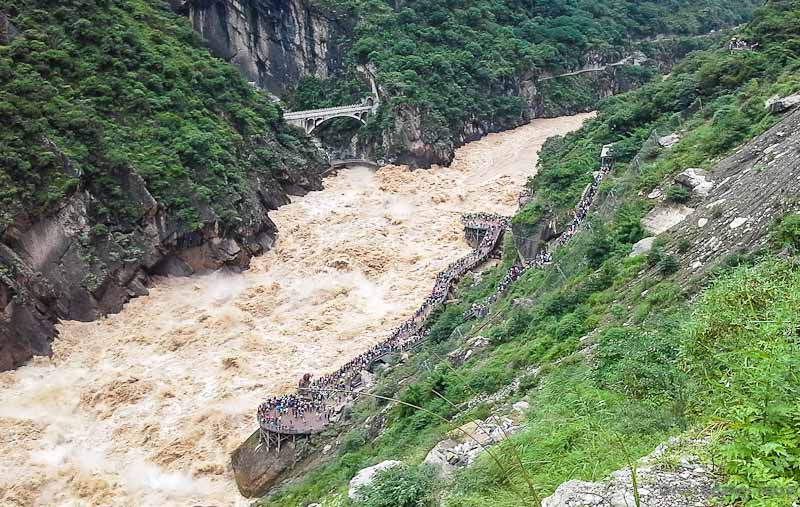 The lovely local tourists had taken us under their wing by now, helping us to understand transport arrangements. They were very kind and considerate. Like many others in China they were keen for a photo with us – we were a bit of a novelty in many places as older independent foreign tourists. 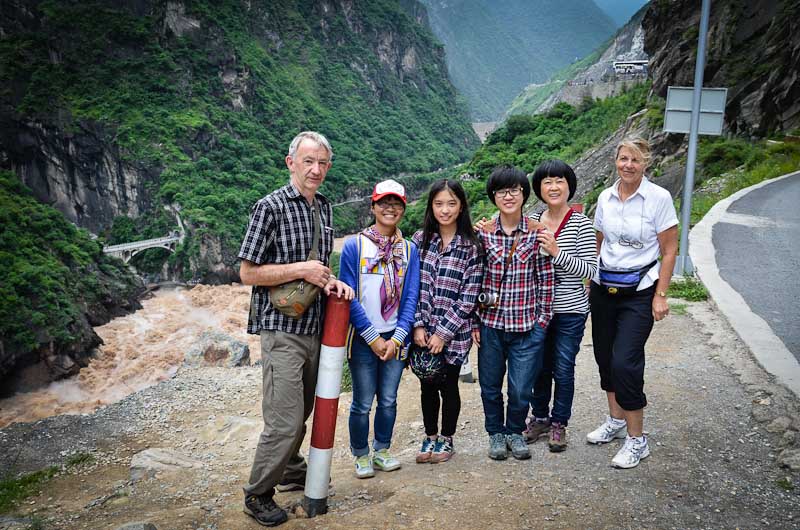 Upper Tiger Leaping Gorge – thanks Ziki for sending the photo.

From there the bus headed off along the gorge road, stopping at Tina’s Guesthouse in Middle Tiger Leaping Gorge. This is where the high trekking trail descends back to the road so is a major junction with lots of comings and goings. Our new hosts had a meal here before heading off to walk down to the river; a 3-hour trek for the return trip. Before they left they explained that they’d arranged with the bus driver to take us the extra 3km to our guesthouse which solved our ditherings about how to get there. We benefited from a lot of kindness and helpfulness during our travels in China and this example probably topped the lot. I hope we are as welcoming and helpful with Chinese visitors in our own country. 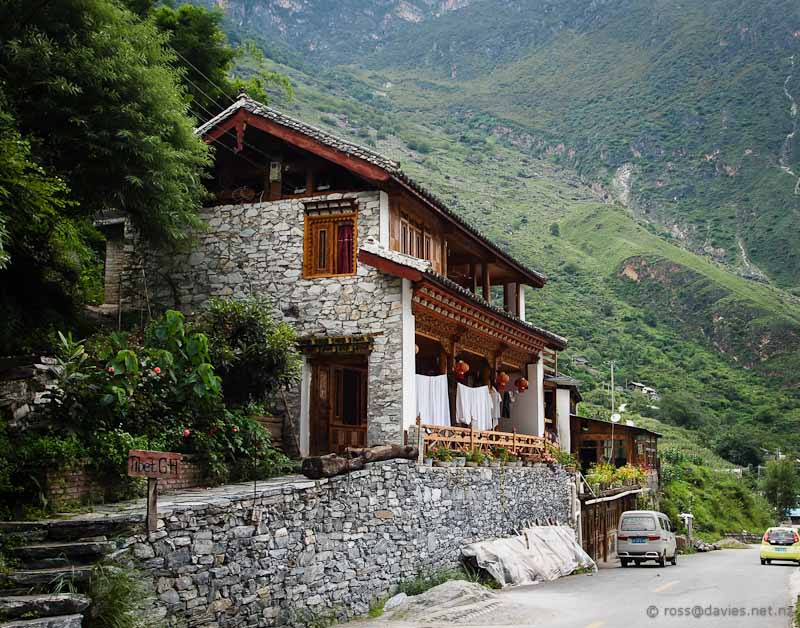 The Tibet Guest House is a lovely little place to stay. It’s right beside the road which hardly matters because there’s hardly any traffic. It’s a through road that isn’t much used. It is an interesting transition. The top end of the gorge had maybe hundreds of vehicles and thousands of visitors each day. The middle of the gorge where the trekkers finish might see a hundred or two tourists. And then 3km further to Walnut Garden where Tibet Guest House is there might be only a handful of visitors a day. It’s like there are invisible barriers on the road or something.

There were probably a lot less tourists at Walnut Garden than on the high walking trail.  We didn’t feel too much like we were cheating. More like we’d chosen a great location to quietly enjoy the extraordinary landscape (except for the noise of the river hundreds of metres below). 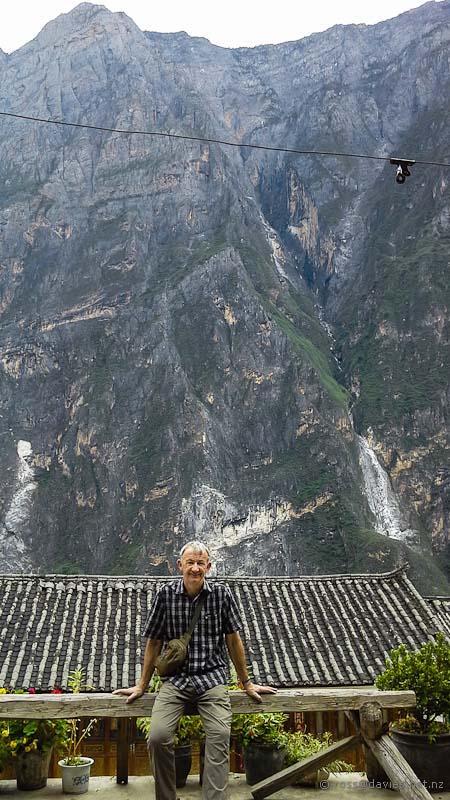 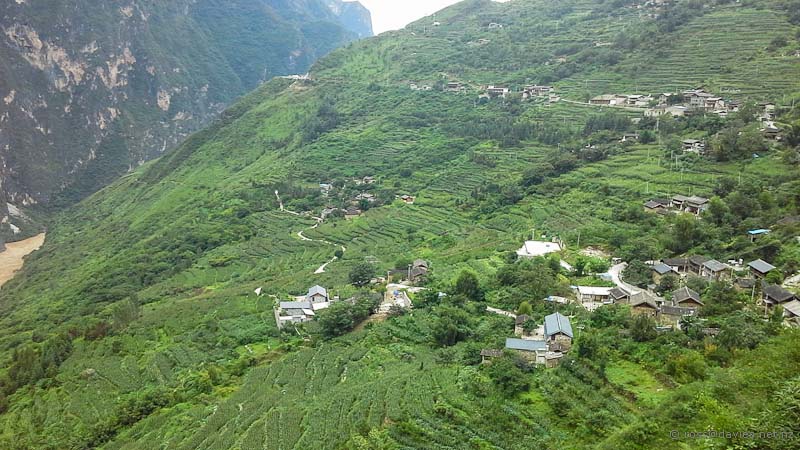 Walking a bit further down the road gave a good view back across Walnut Garden and back up the gorge. Tiger Leaping Gorge is an incredible piece of landscape. The Chinese claim it to be the deepest gorge in the world (but, depending on how you assess height, I think the Annapurna Gorge would beat it). The river is approximately 1700m asl. And the Jade Dragon Snow Mountain on one side is 5,596m asl and Haba Snow Mountain on the other side is almost as high. Even with the mountain tops set back, the cliffs on the far side are around 2,000m high. Sitting at the guest house looking about 500m across the river at a 2,000m high rock wall; it’s definitely in the Awesome category.

Later when it cooled down a little, we went for a walk back up the road the other way. 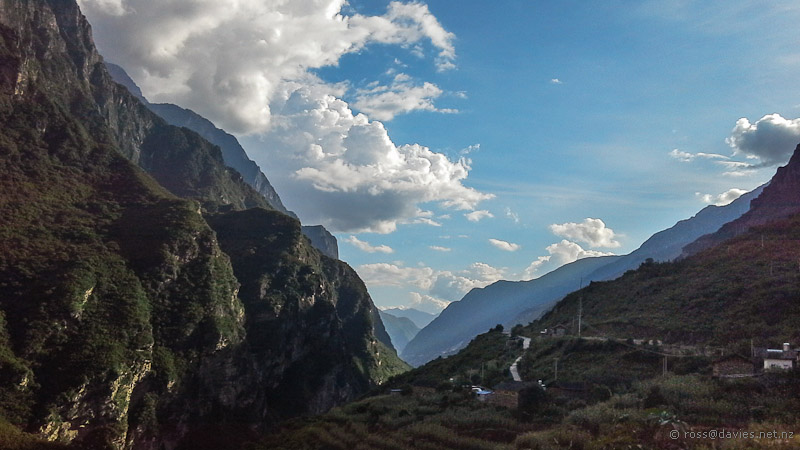 Next morning we found the trail from Walnut Garden that descends and traverses back up the gorge towards the viewing rocks below Tina’s Guesthouse. We probably only got halfway down and along but it was a nice walk. 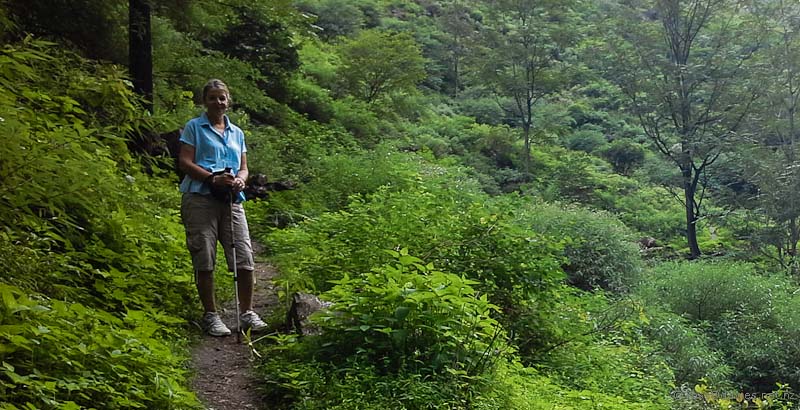 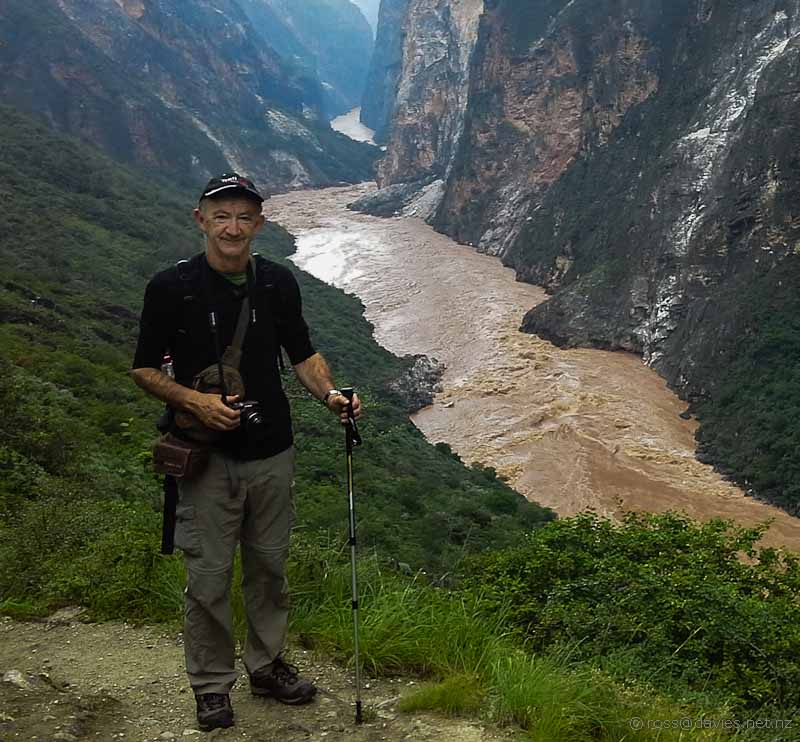 It was a noisy river with a constant roar, amplified by the rock walls. Think NZ’s Huka Falls times about ten. Compelling. 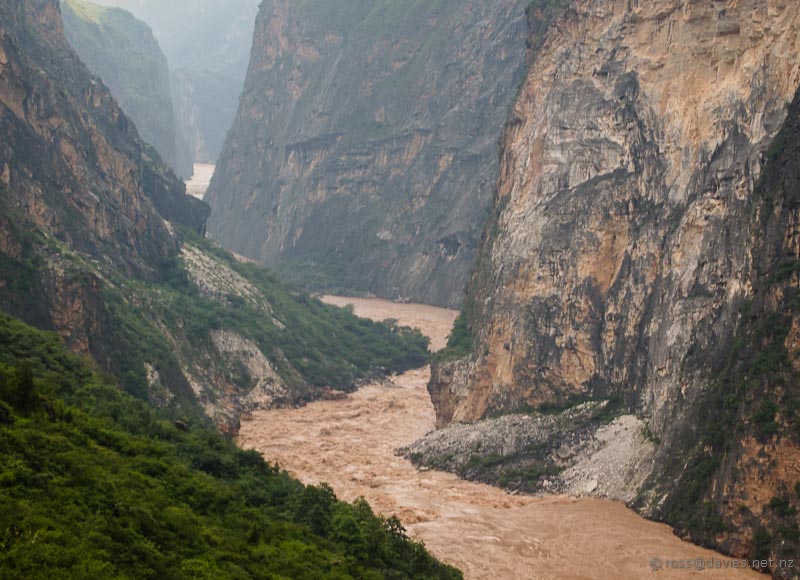 We managed to retrace our steps, even finding a more direct route back to our guesthouse. It was time to pack up, have some lunch, and get dropped back to Tina’s Guesthouse. With some time to spare, we walked back up the road a very short distance to the road bridge over a side gorge. If ever I had a head for heights it’s long gone, and I could hardly bring myself to look over the railing. It is a very long way down. 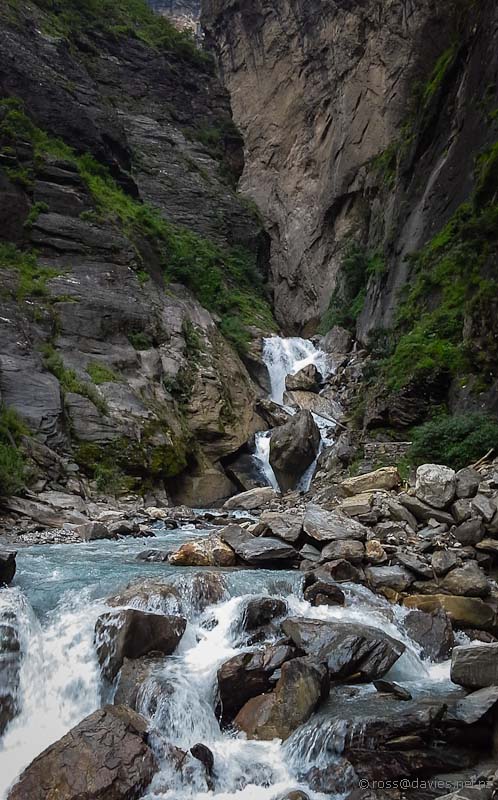 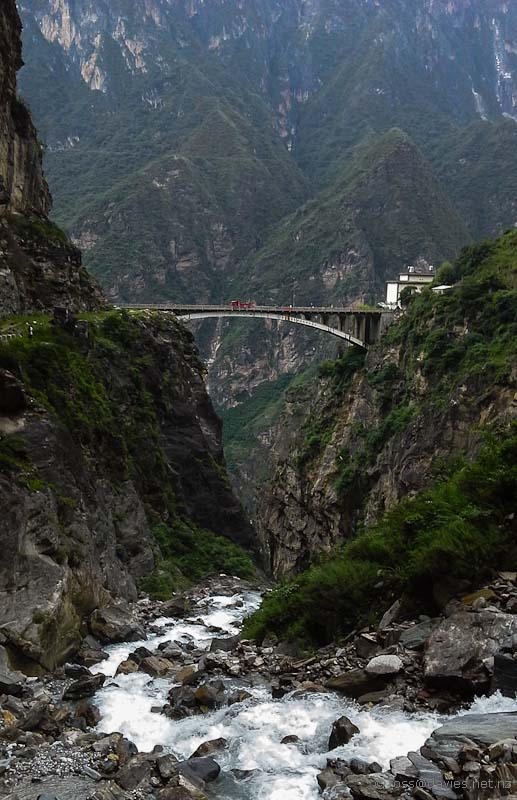 Roadbridge across side gorge near Tina’s Guesthouse Tiger Leaping Gorge 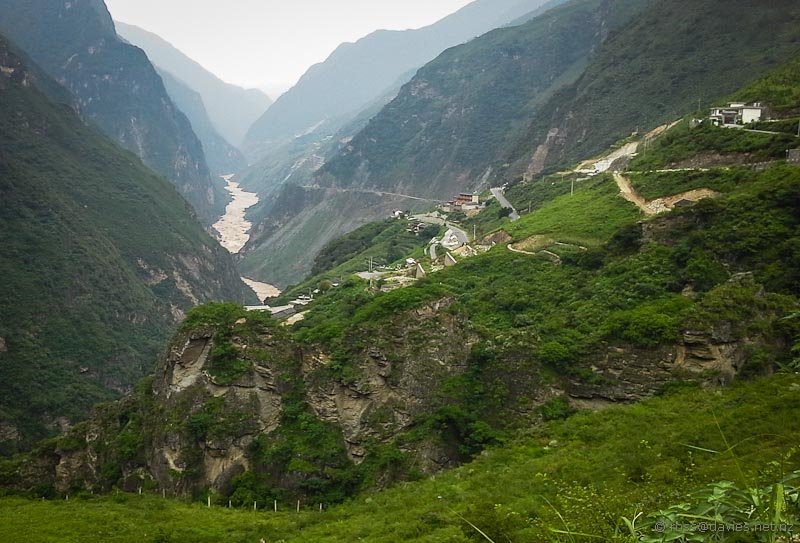 Soon enough it was time to farewell the Tiger Leaping Gorge. It came well recommended, and definitely delivered. The scenery is stunning, to the point of being scary. Our choice to do the drive-in option probably didn’t diminish our experience much. It is one of those places you don’t forget; you couldn’t.

One of Tina’s buses took us back up the gorge to Qiaotou and then began the climb up towards Shangrila. As we got higher, the climate and geography and buildings changed. It was easy to see the Tibetan influence as the air got thinner and colder. We just hoped we had enough warm clothes. 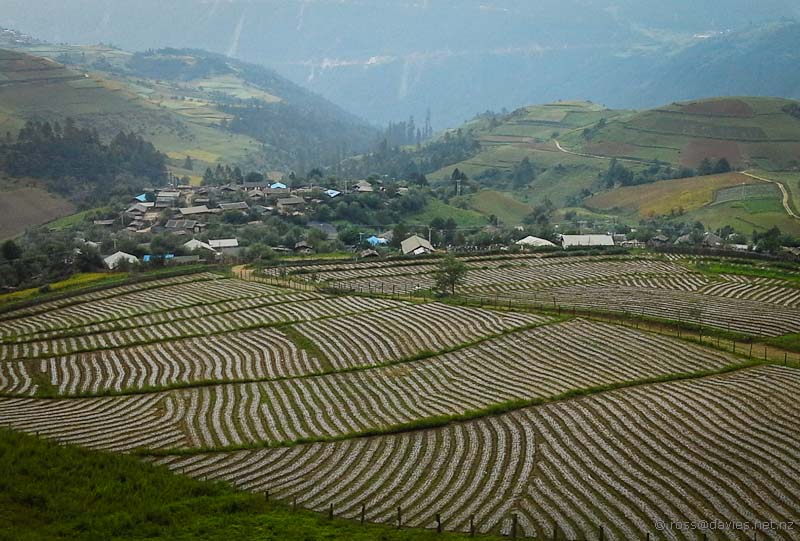 2 Responses to To Tiger Leaping Gorge To Look – Yunnan China