A Big Walk Back From Cape Brett

The plan was to take the shorter walk in to Cape Brett lighthouse and hut, and then do the full Monty on the way out; walk right back to Oke Bay at Rawhiti. It was a great plan as we’d enjoyed the afternoon hanging out around the hut and reading up on the lives of the lighthouse keepers and their families. So that just left the part about walking all the way out. 16km the info says; which doesn’t sound so awful. But then it says 8 hours which did sound a lot more. Plus the two young French guys who arrived in the evening mentioned all the ups and downs as the track follows the ridge-line muck of the way.

So we woke early and were away before 8am. It was overcast which we didn’t mind as the first part of the track was considerably up; back past the lighthouse and on up the ridge. 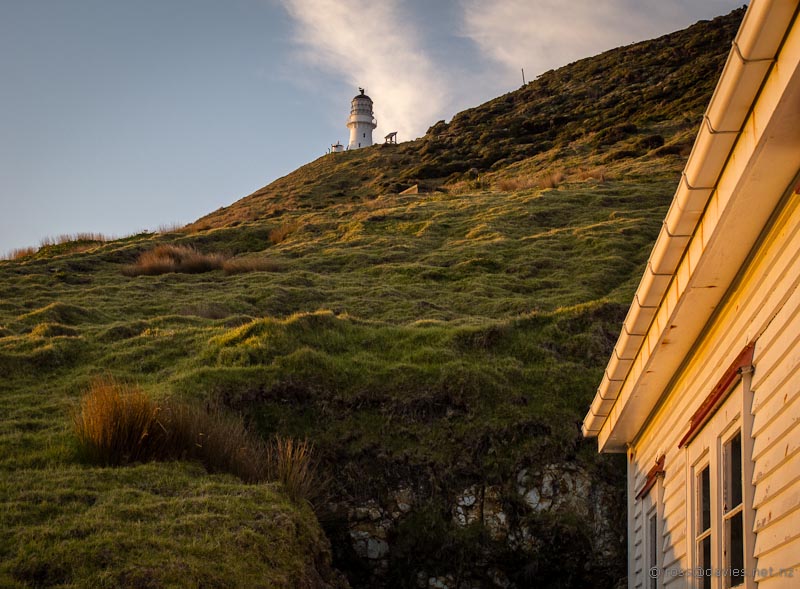 Cape Brett lighthouse from the hut 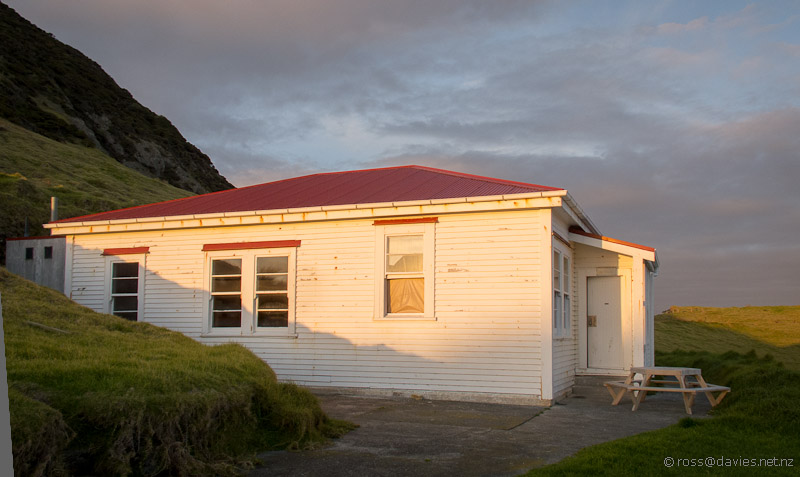 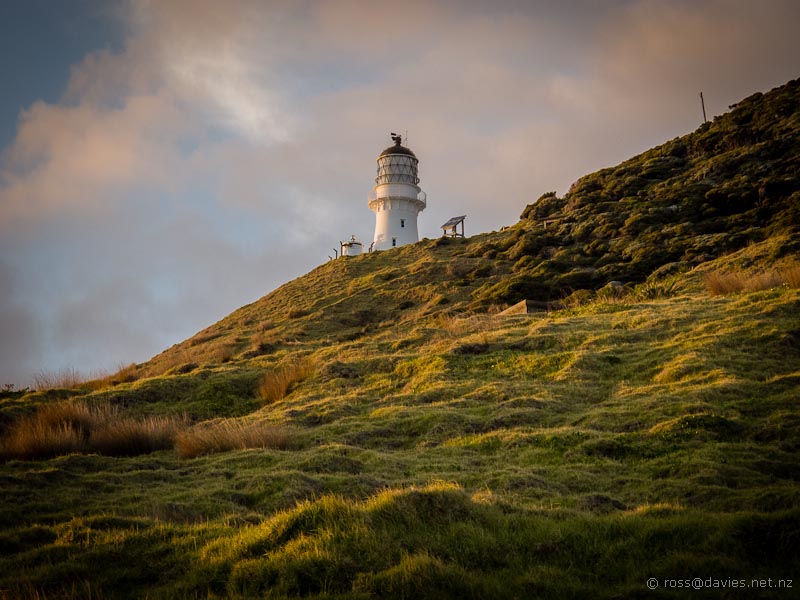 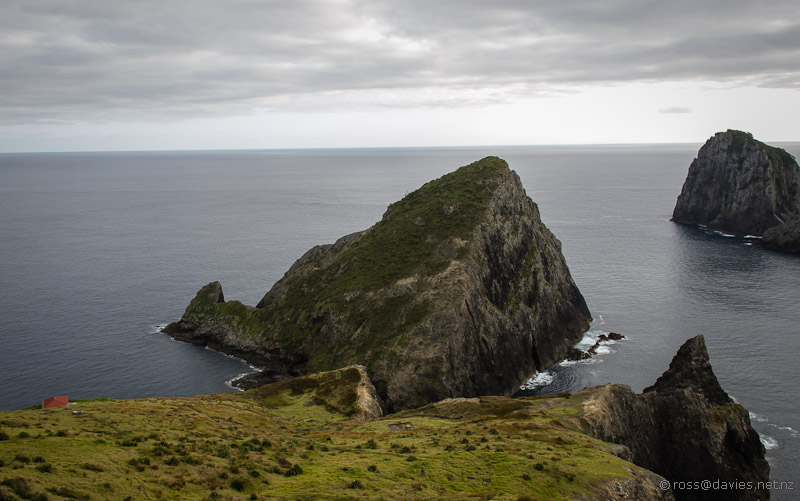 Cape Brett with the hut down on the left with the red roof.

Cape Brett lighthouse – which has been nicely restored. 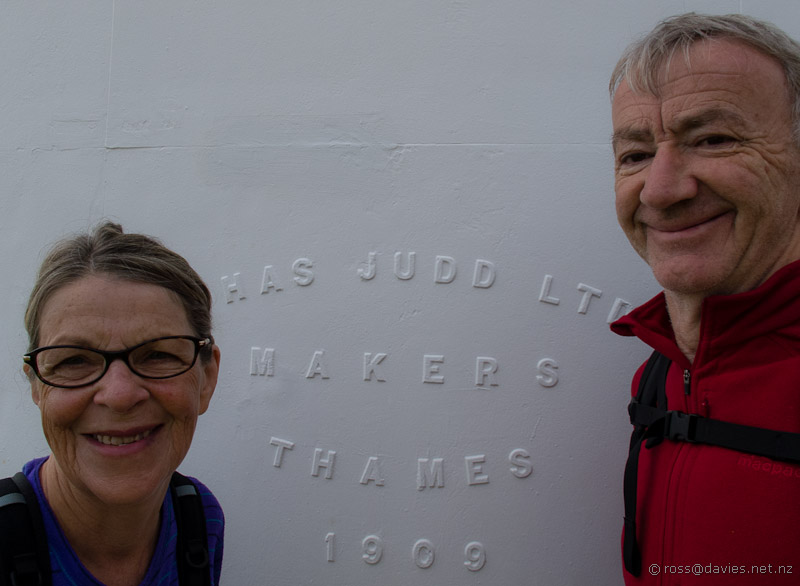 We liked that the lighthouse had been born in Thames. So had Wyn’s Mum and so had I.

Cape Brett lighthouse. The light these days comes from the white cylinder partially visible to the right of the lighthouse which is much shorter; it’s all fully automated.

We knew what to expect of the first section of the track back to Deep Water Cove so it didn’t seem so intimidating. But I still couldn’t bring myself to look over the edge at a couple of parts. By the time we reached the track junction the day was clearer and warming up. From there the track followed the ridge line more or less over each bump and hill along the way. 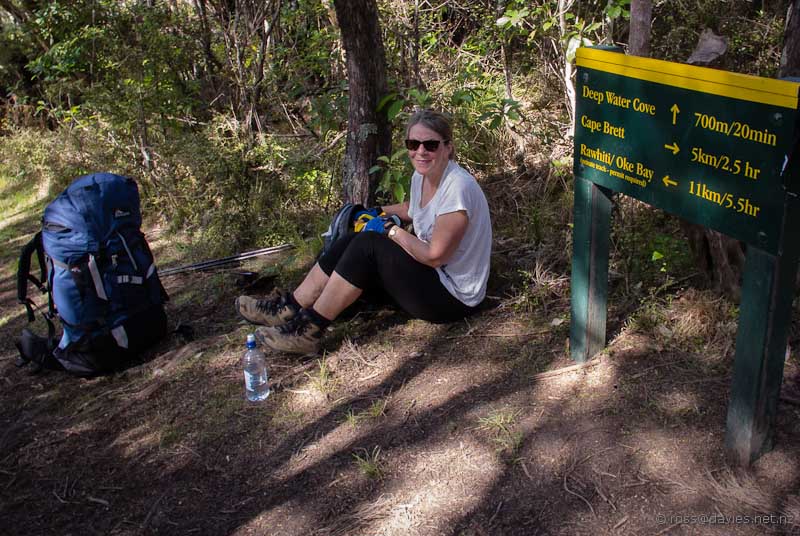 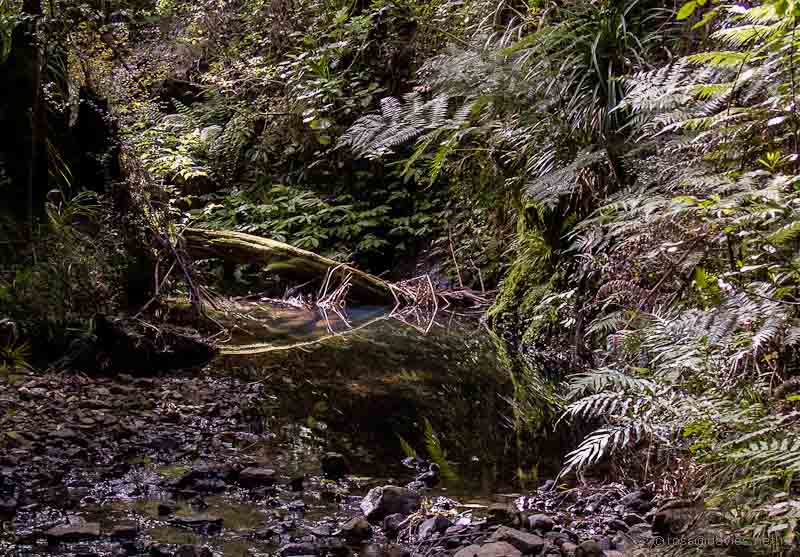 Small stream Cape Brett track. Mostly there is no water because the track follows the ridge line. 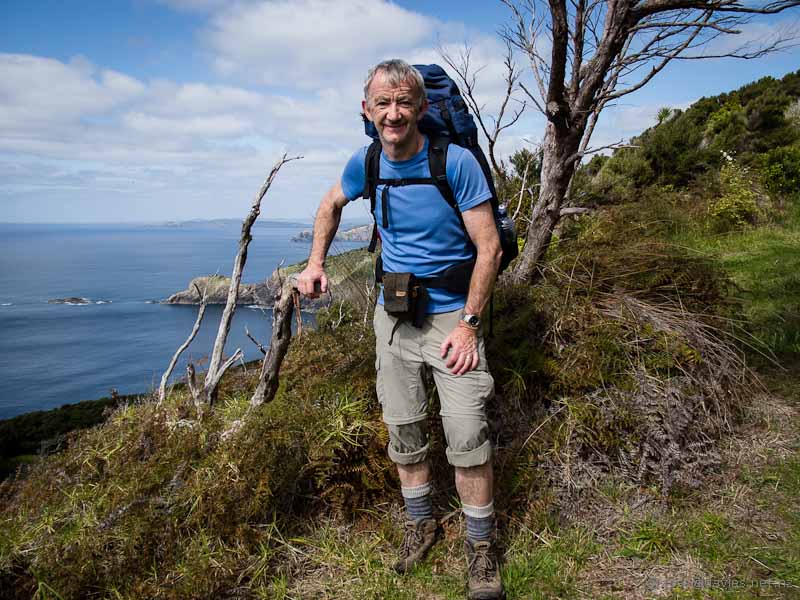 Cape Brett track with a view south down the coast 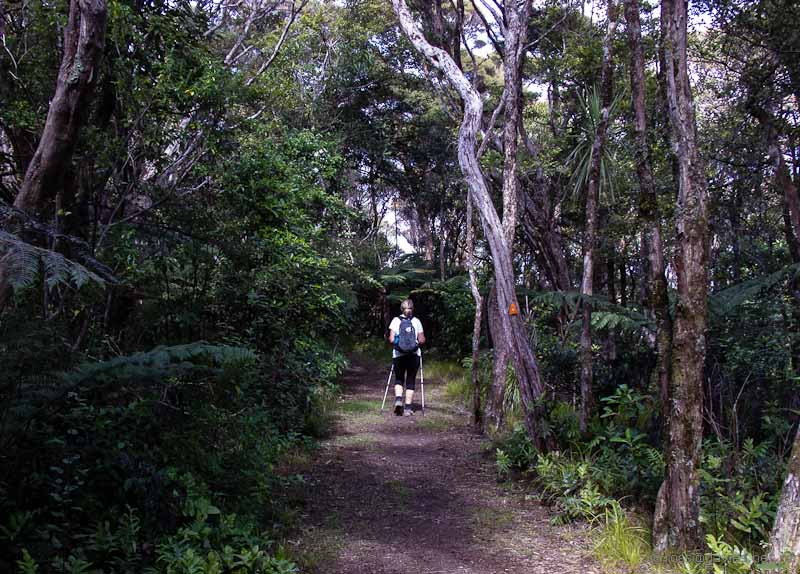 Cape Brett track – much of it is through regenerating forest

It is a long way back along the ridges but there is ample reward with many wonderful views of the coastline to either side. At last we were starting to get an idea of what the Bay of Islands is all about i.e. a bay with lots and lots of islands. 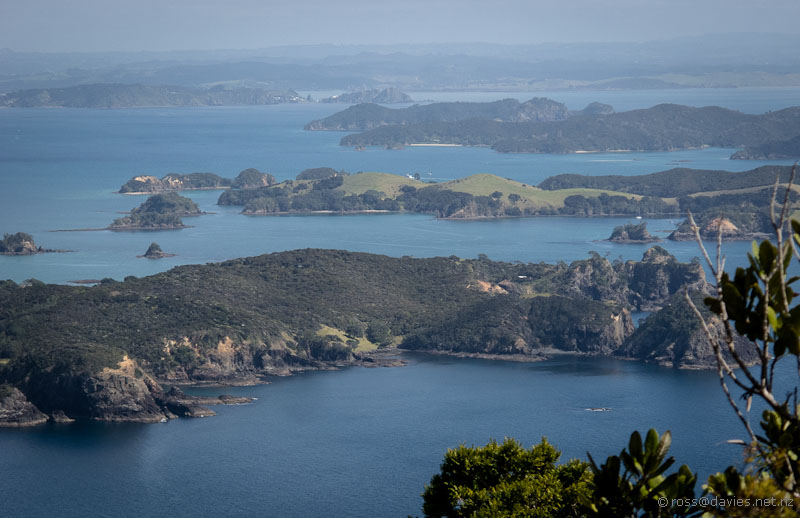 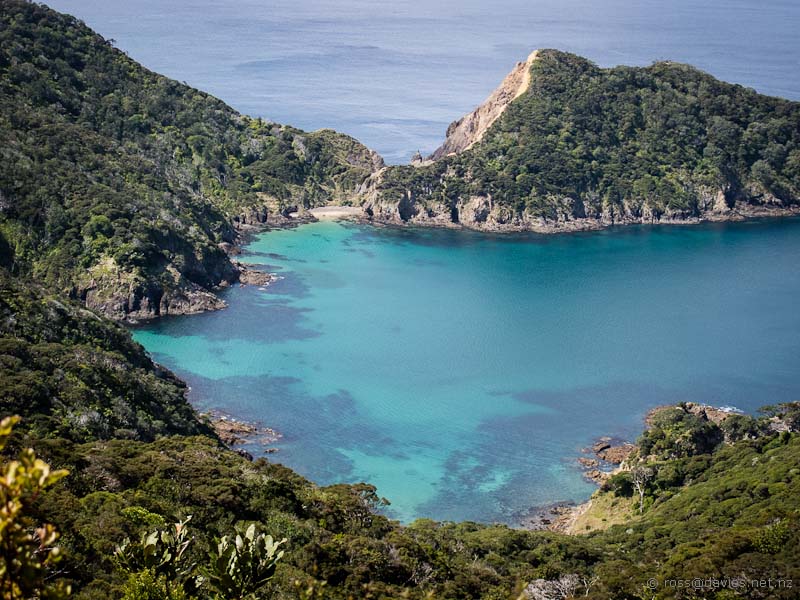 View from Cape Brett track – another window into the sea 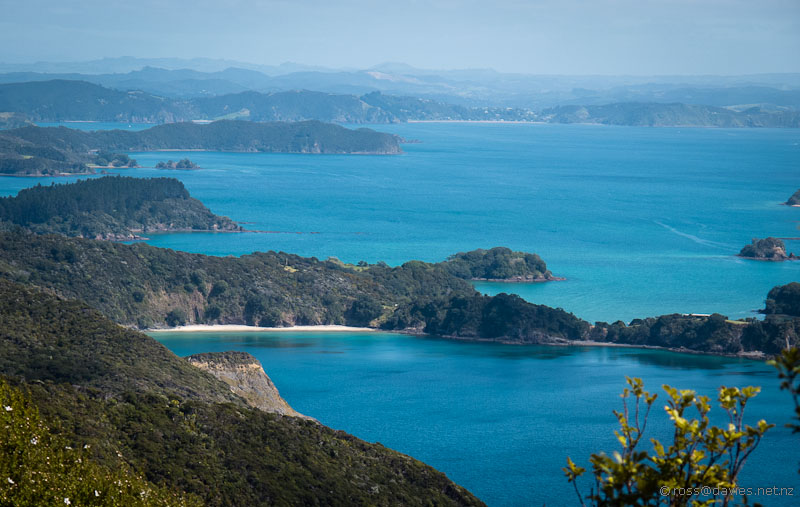 Bay of Islands from the Cape Brett track. That’s Oke Bay at Rawhiti the closest Sandy Beach. The sandy beach in the distance is the one over the back side from Russell. 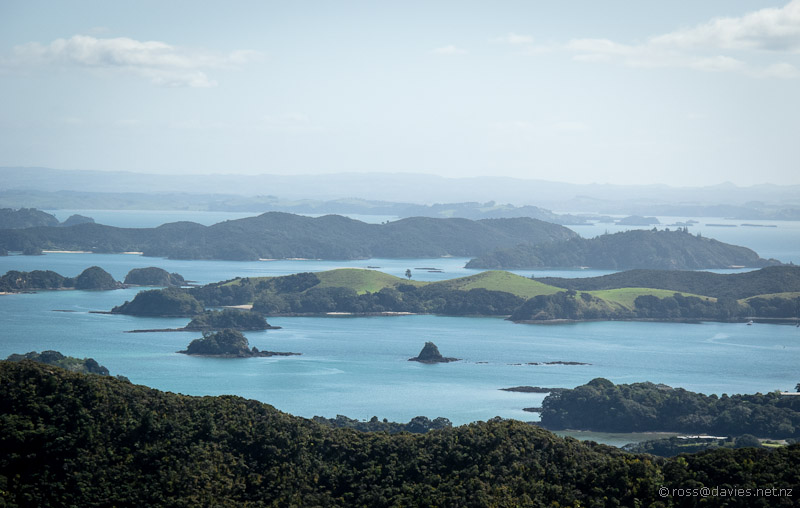 Bay of Islands from the Cape Brett track

Bay of Islands from the Cape Brett track. This is from a lookout on top of Pukehuia which is the last big hill at 345m or thereabouts.

After a long descent we finally reached Oke Bay and the end of the track. It did take us the 8 hours, although that included a lovely long lunch of an hour. There were lots of rewards with all the views of the coastline and the final views from Pukehuia were alone worth the effort. Short of getting into a plane this is probably as good a view of the Bay of Islands as is to be found. 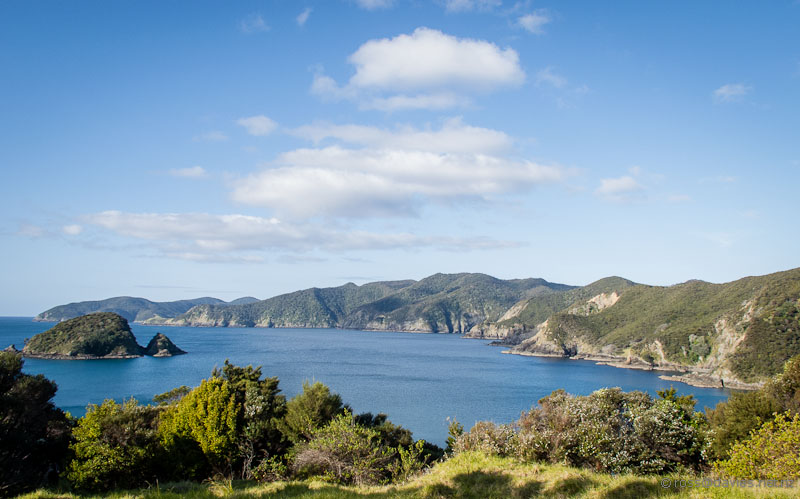 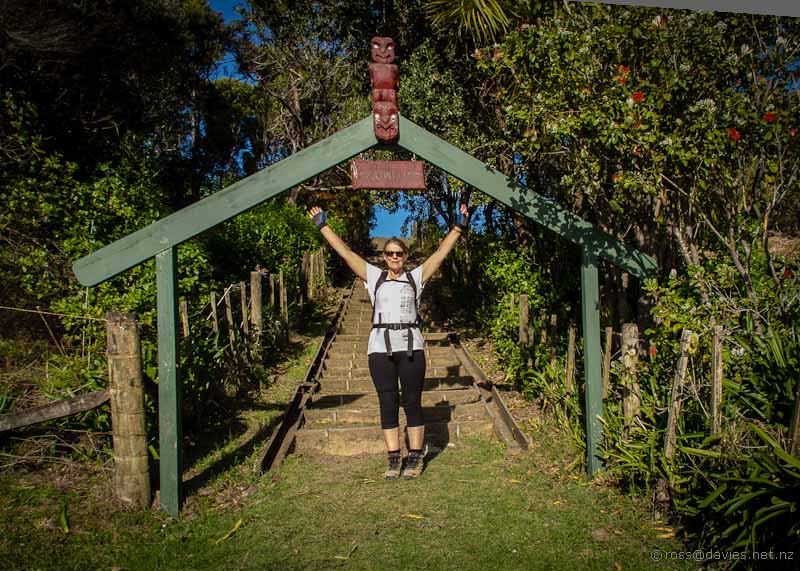 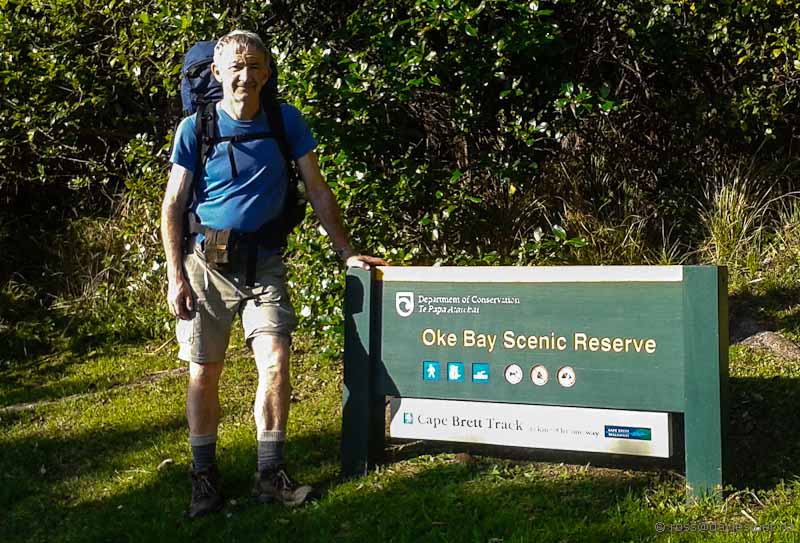 1 Response to A Big Walk Back From Cape Brett