While we were at Bland Bay last week we wanted to walk the walk around Whangaruru North Head. The harbour entrance is at the southern end of the harbour and so North Head was to the south of Bland Bay. But I guess the North Head is north of the South Head over by Oakura Bay. Except when I check it is actually east. So there goes that idea. Hopefully the weather was always clear when they were entering the harbour in the olden days because it might just be a bit confusing for anyone not sure which way was up. 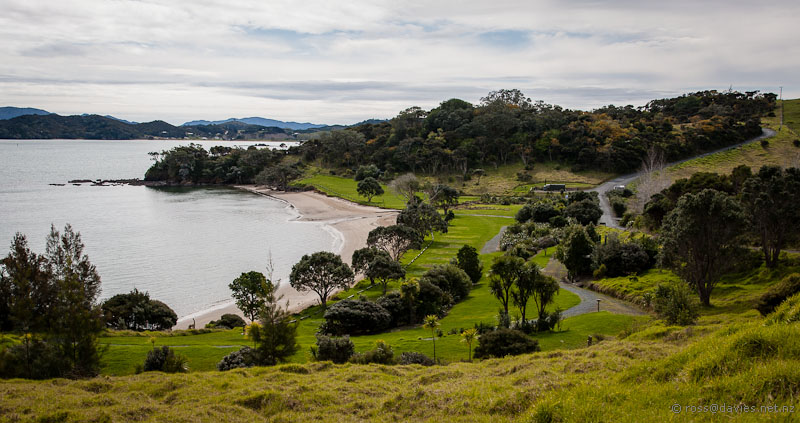 From Bland Bay we drove the couple of kilometres to the Whangaruru North Head Department of Conservation camp – which is closed for the winter when it goes soggy. Nice outlook. The information there about the walk was kind of helpful in explaining that there were several tracks but then didn’t seem to have the detail on exactly where they started or finished. This was the Department of Confusion at work. I have decided that their signs are made by people who know what they mean but don’t ever check that they help us who don’t. They could do well to learn from the Whangarei District Council. Or do some checking with users. Or take a hint from the helpful additions scratched onto their signs (or written neatly with permanent markers by people trying to help other people understand their signs. Which by the way generally look like they were created last century, they are fading!

Anyway …. I’ll calm down and walk on. Which is what we did; we wandered through the camp and followed some orange markers which seemed to go in the direction we wanted. Eventually the farm track became a bush track and headed up. It was a lovely track, if a little greasy in places. Further on we came to a fork in the track. One was labelled “Trig” and the other “Coast”. This was interesting but unhelpful because no other information explained where these options fitted into the loop-track concept. We decided that Trig sounded like it might have a view so we headed that way. The view didn’t exactly solve what “Coast” meant but with “Trig” a dead-end “Coast” it had to be. Which didn’t actually go to the coast but it did go closer and did have a view of the coast and did keep on going until eventually we came to a point with signs showing clearly what the options were.

It was a nice day for one of those sort of adventures. 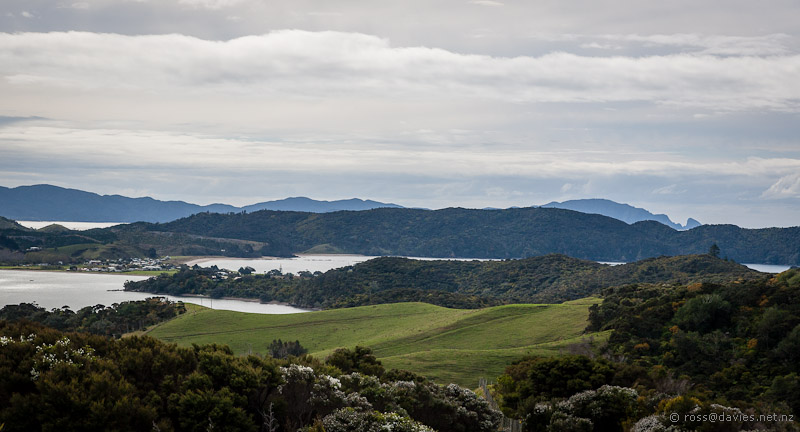 The view North from Whangaruru North Head; Bland Bay isthmus on the left and Cape Brett in the distance on the right 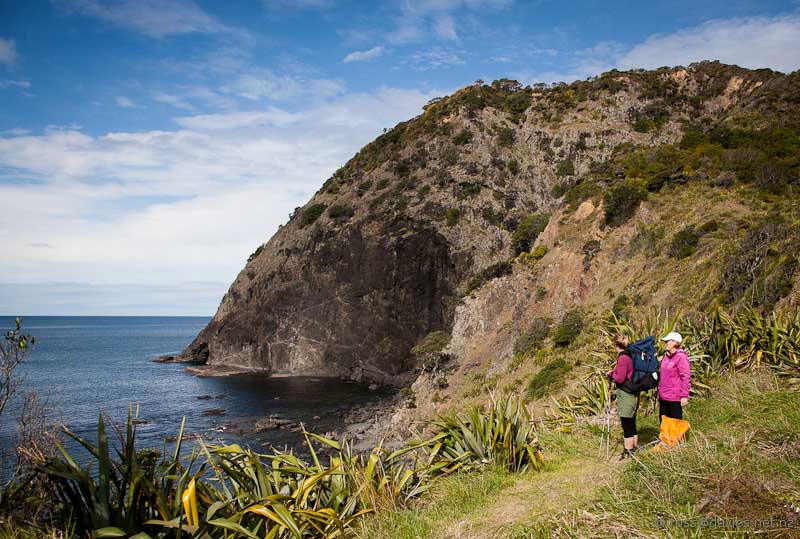 Coast side of Whangaruru North Head – as close as we got 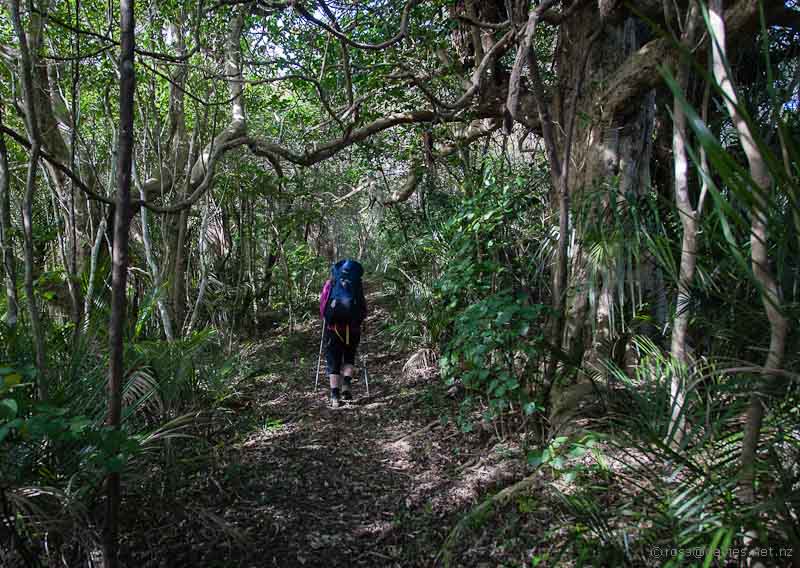 The main memories are of the nice natural track and the Tuis. The birds were rampant. It must be the kowhai trees blooming, which they were; all over the place. And every Tui from anywhere seemed to have turned up to enjoy the occasion. The noise was gorgeous and remarkable and memorable. 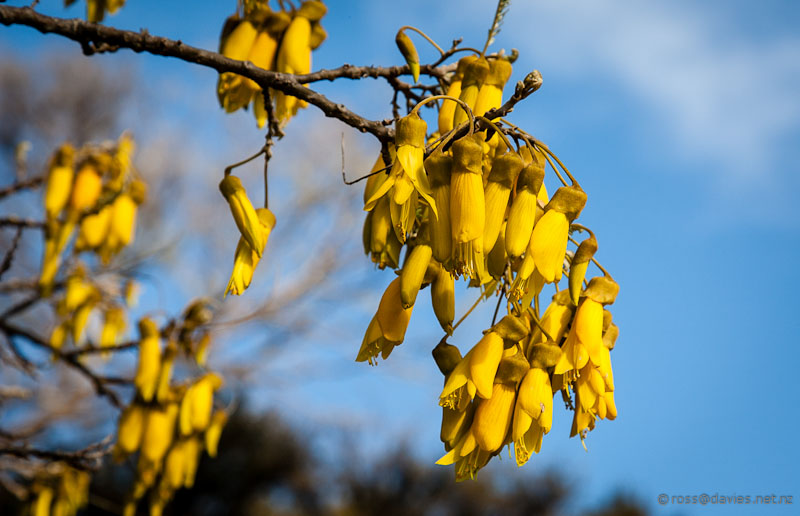 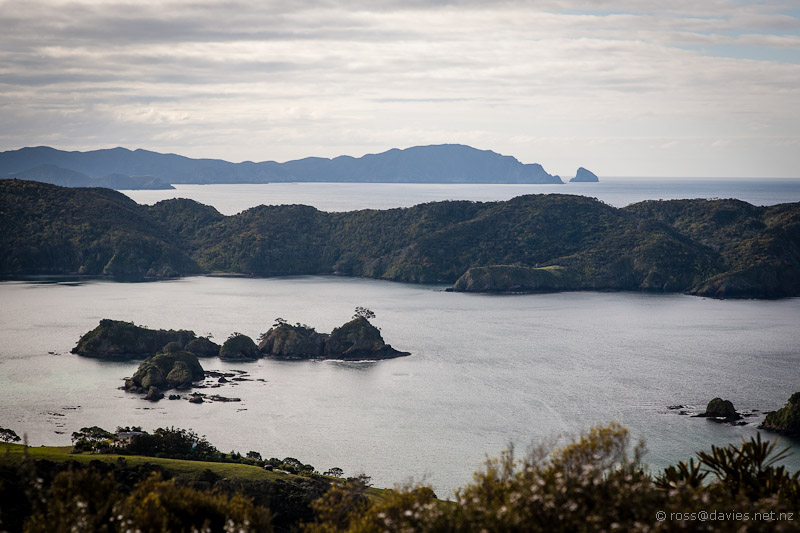 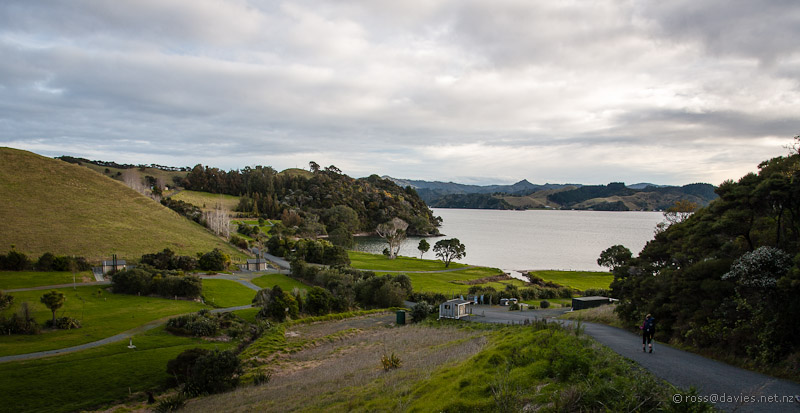 Back to the DoC camp Whangaruru North Head – wearier and wiser. Oakura Bay across the harbour. 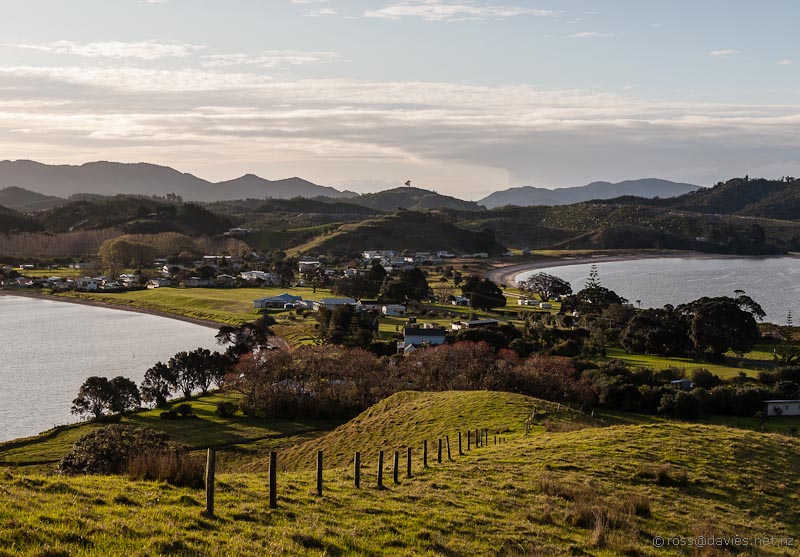 Bland Bay isthmus; Bland Bay on the right and Whangaruru Harbour on the left. The camp is on the edge of the bay.