South On The Surf Highway – Taranaki

We spent a last night in New Plymouth overlooking Fitzroy Beach looking south towards Port Taranaki. In the morning we headed back downtown and paid a quick visit to Puke Ariki, the museum. An animation of the volcanic history had been recommended to us and it was a fascinating recreation of the volcanic sequence of how Taranaki got to where it is now. Mt Taranaki is at the southern end of a row of volcanoes that have progressively erupted and subsided as the activity has moved south. Mt Taranaki has formed several times and subsequently collapsed/exploded in major ways. This has had a significant impact on the surrounding landscape, as a mountain collapsing might. The museum also gave us our first glimpse of Mt Taranaki for the day. 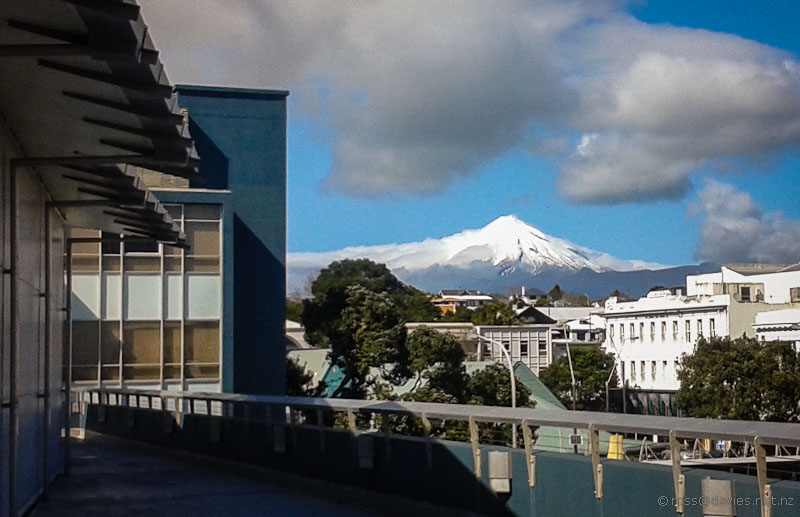 We headed south from New Plymouth on a direct line towards Mt Taranaki. We were travelling separately for the day with Suzi motorhome not being in the best of health. We figured that towing the car mightn’t be so good for her. This turned out to be a blessing as the road climbed and narrowed. We were heading for Pukeiti, a 360-hectare forest garden famous for its rhododendrons; an interesting mix in native rain forest. This is sited on a saddle between two of the earlier volcanoes (now much lower) in line with Mt Taranaki. The road does get very narrow so it was an interesting drive. 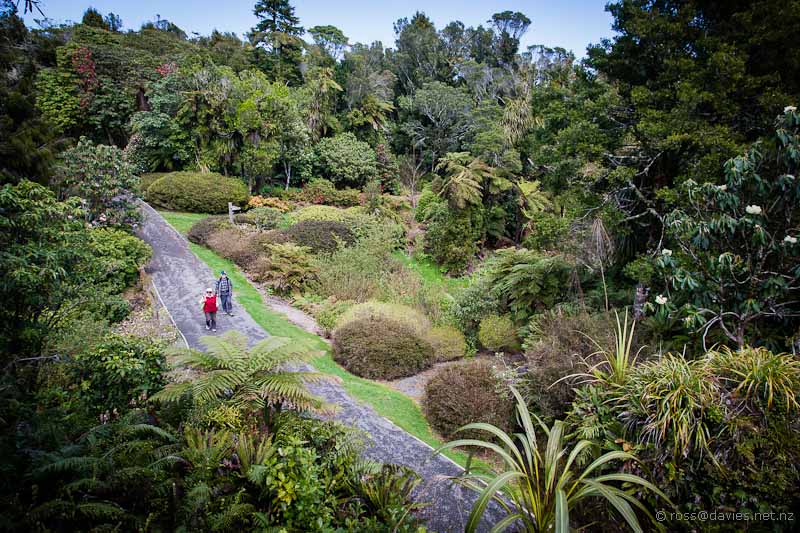 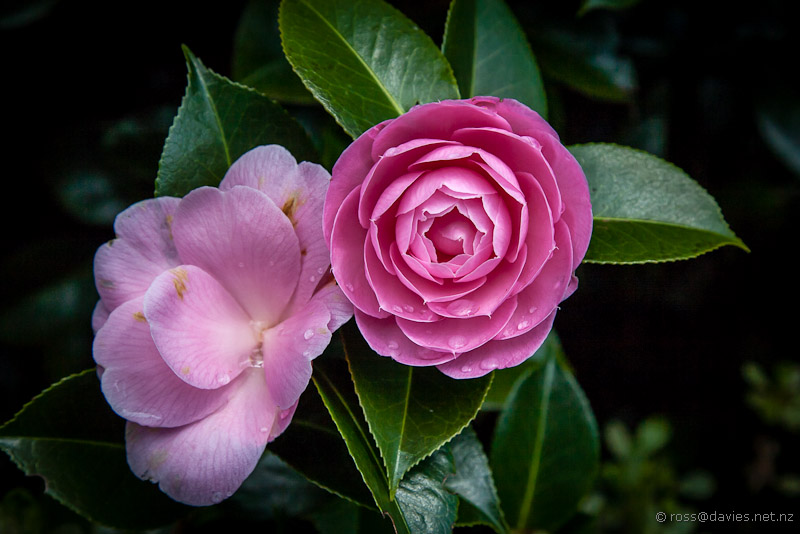 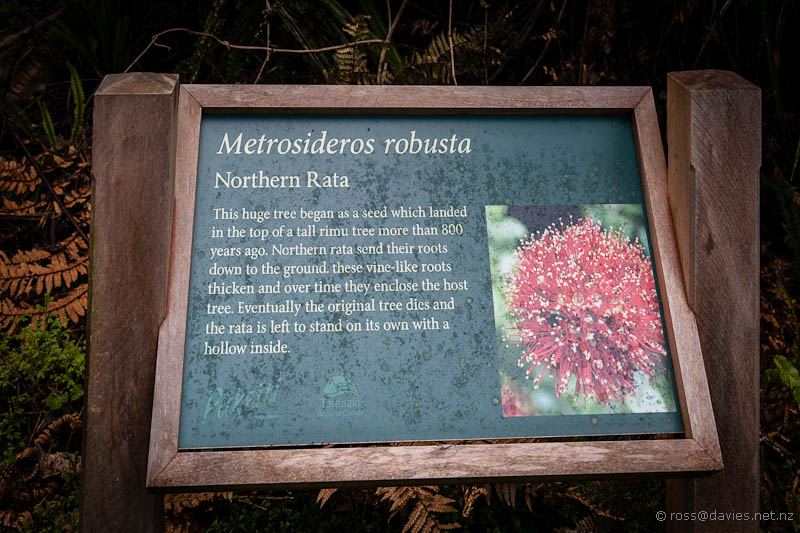 The story of the Northern Rata Pukeiti Gardens Taranaki 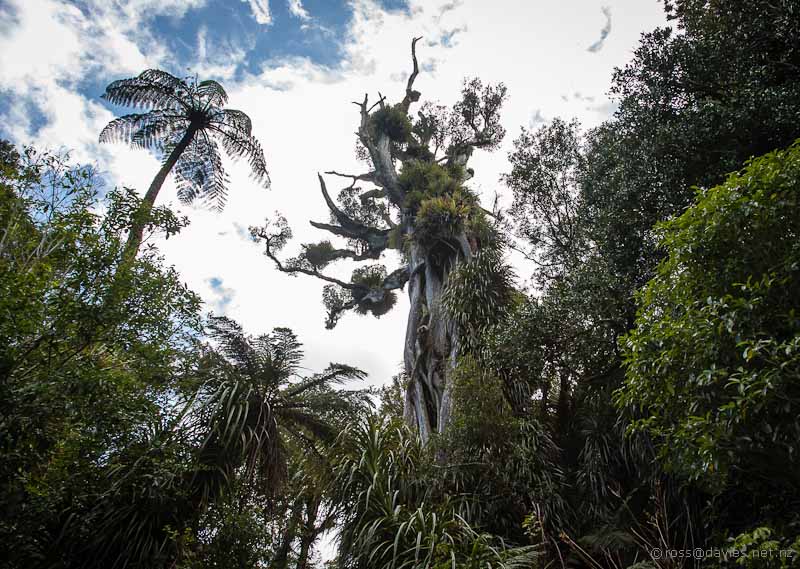 Northern Rata Pukeiti Gardens Taranaki – a scary looking tree if ever I saw one! 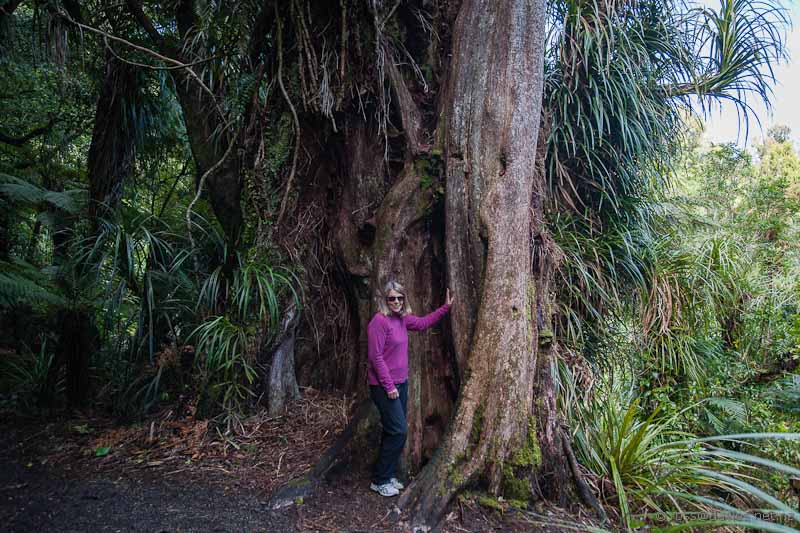 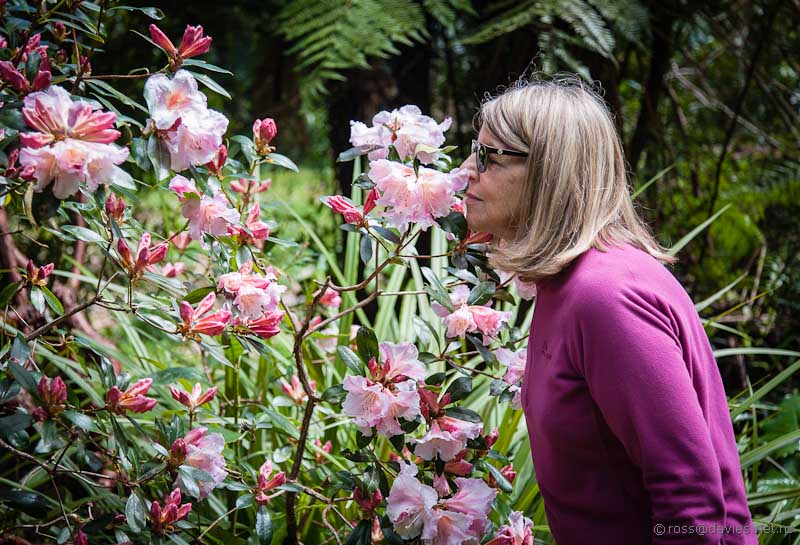 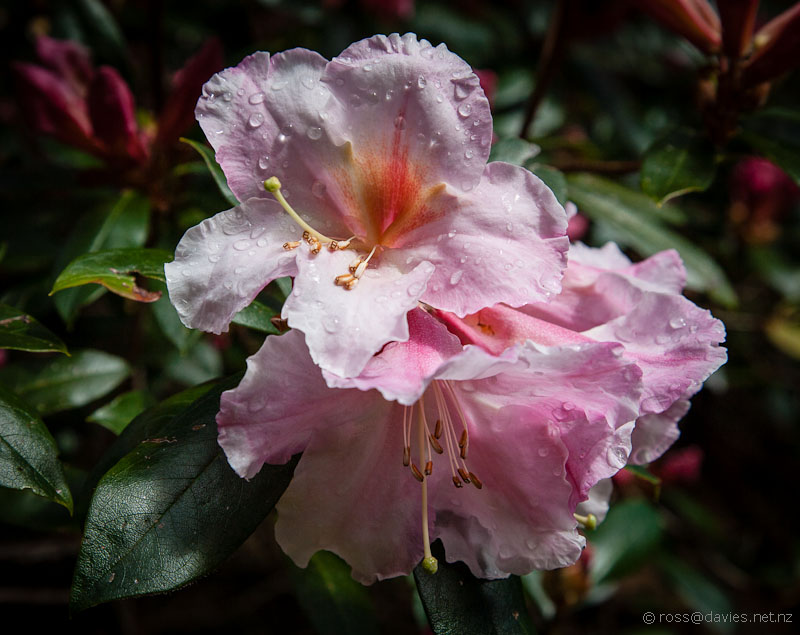 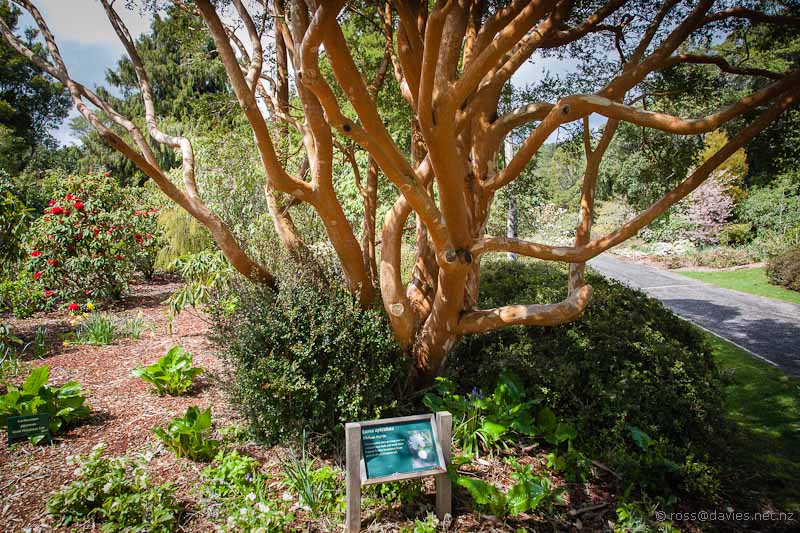 We were a little disappointed with the gardens; we were too early by the looks of things. Plus there is major redevelopment going on near the main facilities so it was a bit of a construction site around there. Nevertheless it is an interesting concept and must be a sight when it’s at its best.

We carried on south-west from there; descending an even narrower road towards the coast and State Highway 45 aka the Surf Coast. With the Taranaki coast being a symmetrical semi-circle from New Plymouth to Hawera, the beaches offer plenty of choice for the surfers no matter which way the wind is blowing. We headed south towards Cape Egmont and the lighthouse; the western-most point of Taranaki. As New Zealand capes go, Cape Egmont is an anti-climax. Most of our capes are mighty headlands that dominate the landscapes. Whereas Cape Egmont takes a guess to work out which point might be the most westerly. It’s all about how they are made. Cape Egmont’s creation has been the most dramatic with fiery volcanic origins yet its appearance is now the least dramatic. 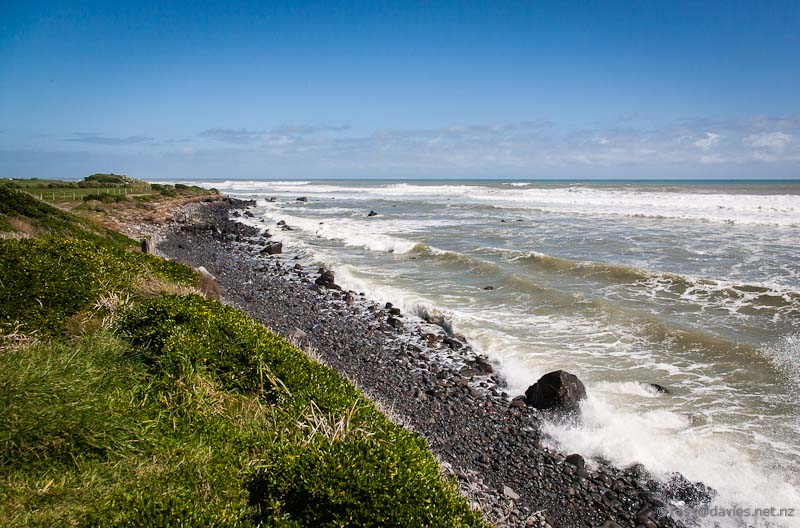 Cape Egmont Taranaki – it’s here somewhere, or it might be the other one …. 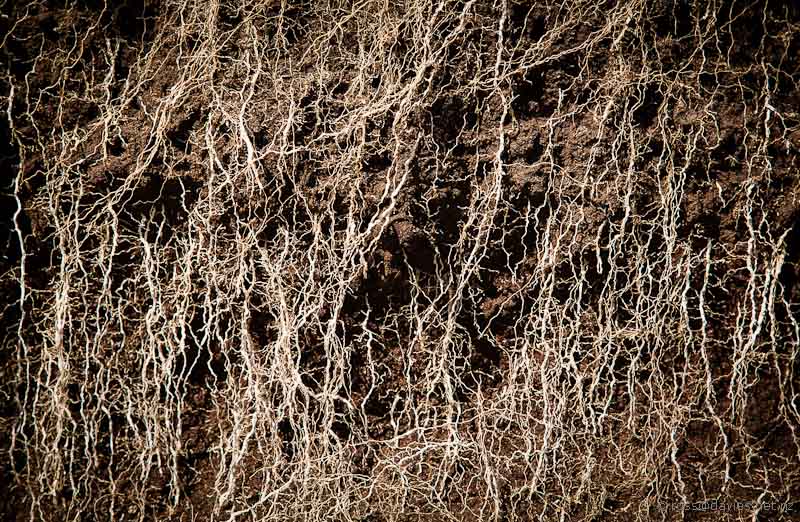 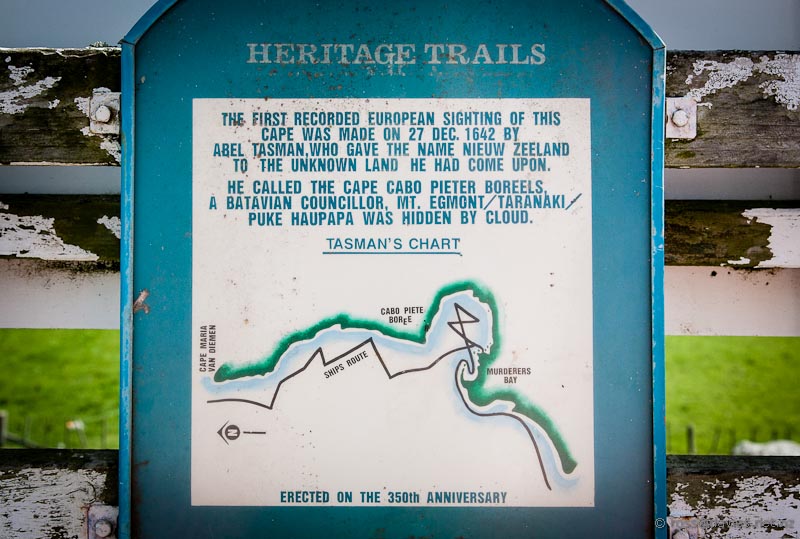 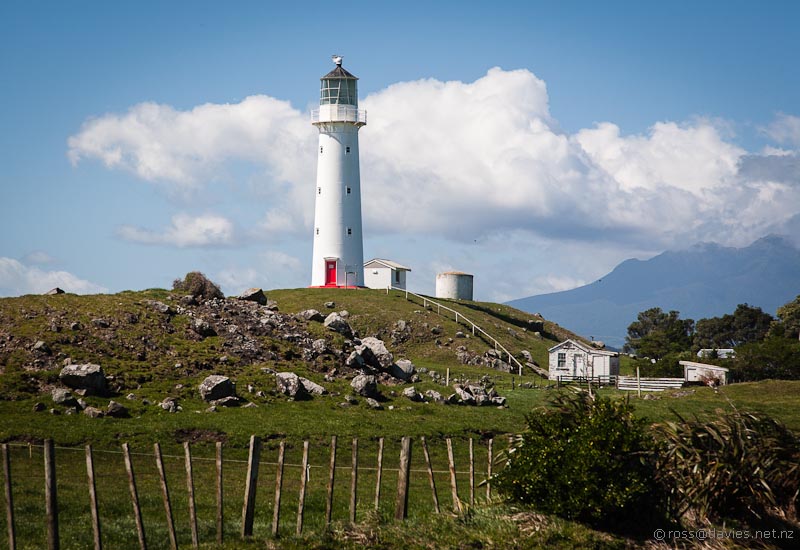 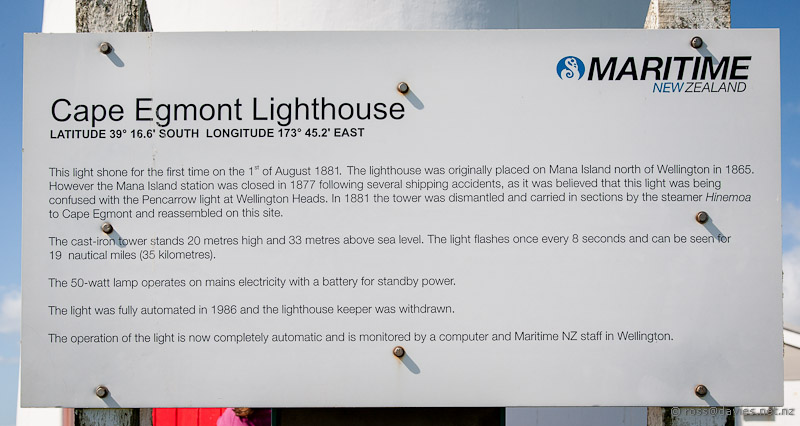 The story of the Cape Egmont lighthouse Taranaki 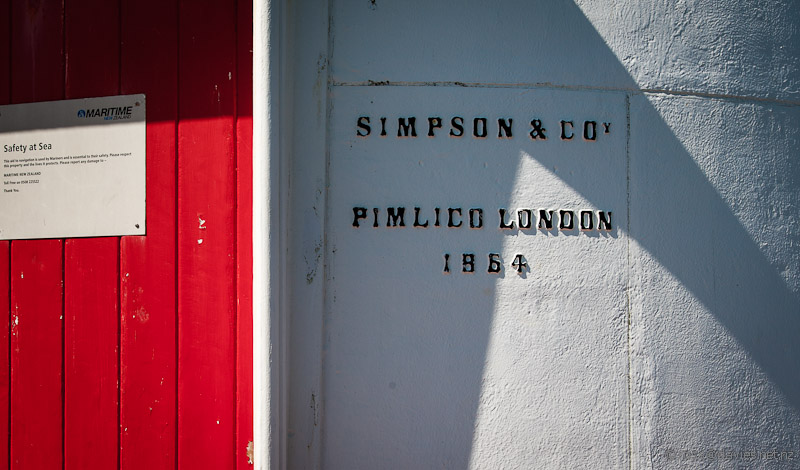 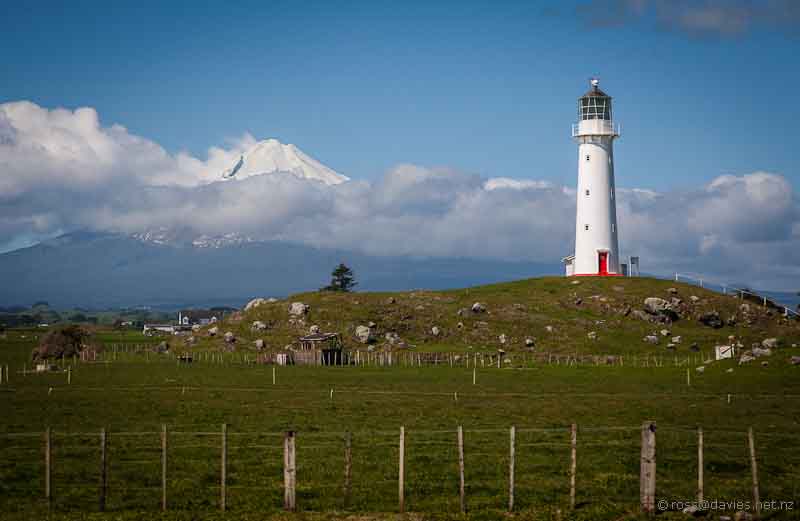 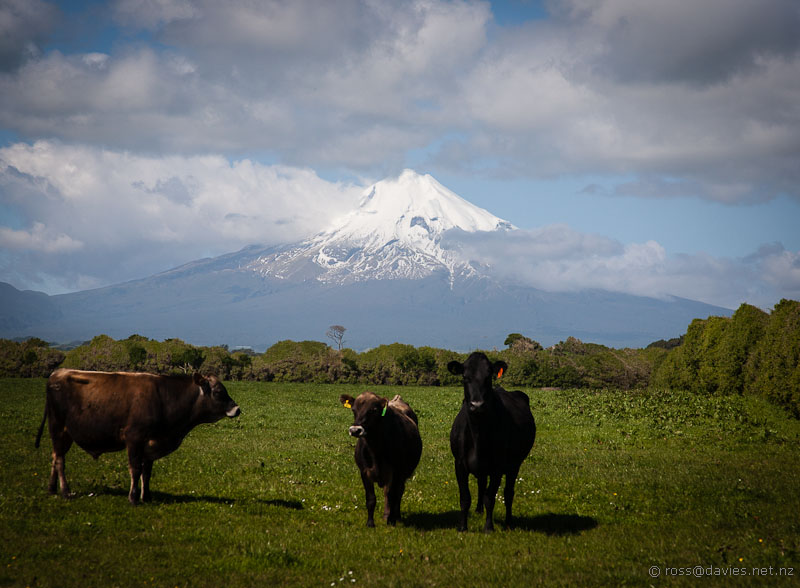 We had late lunch nearby and later made a small diversion looking to see what we could see of Parihaka. This was a place that I’d heard about with an interesting story. “In the 1870s and 1880s the settlement, then reputed to be the largest Māori village in New Zealand, became the centre of a major campaign of non-violent resistance to European occupation of confiscated land in the area.” It didn’t end well, nor did it reflect well on the colonial powers. If you have some time, you might like to read more about it here.

The village/pa is not really signposted, and having found it is not really welcoming or unwelcoming. Somewhere we read that the pa can be visited by arrangement so maybe if we’d asked around we might have found more. It is a focus for an annual peace festival but even that seems to fly under the radar in New Zealand. This is a story that we all need to know to understand how things work today. We maybe know more about the Troubles in Belfast in the 1970s than we know about the troubles in Taranaki in the 1870s?

Much of the Surf Highway is inland from the beaches but it does meet the sea at Opunake, It was a stormy day when we passed through with a stormy sea and most of the surfers were somewhere else. 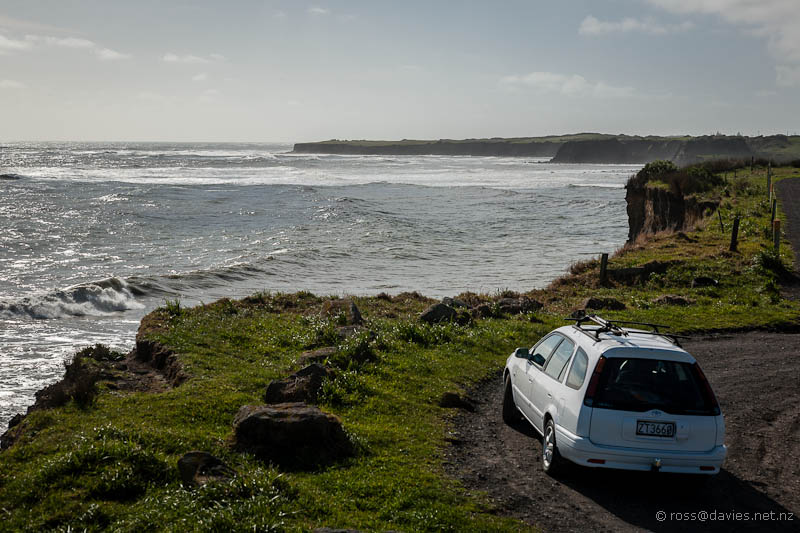 Opunake on the Surf Highway Taranaki

We carried on to Hawera to stay. The highlights of the day were the many views of Mt Taranaki, a lovely classical volcanic mountain. The Surf Highway offers a bonus of foregrounds of strange grassy mounds; a legacy of the many lahars as Mt Taranaki has collapsed and poured down over the surrounding land. It is a serene landscape with a violent history. 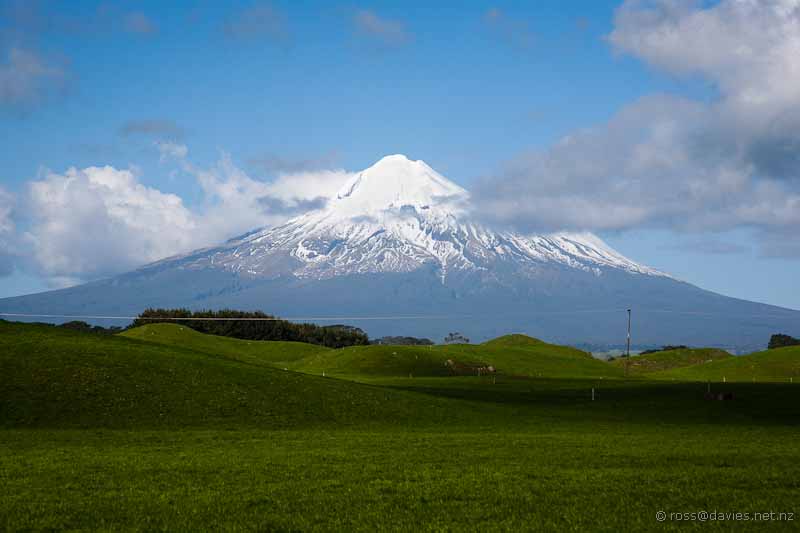 Mt Taranaki with grassy lahar hillocks in the foreground

2 Responses to South On The Surf Highway – Taranaki