West to Taranaki and the Wonderful Len Lye Centre

From the hot pools at Waikite Valley we headed west, more or less. The central North Island seems to be crisscrossed with State Highways never going exactly where we want to go. Travel is often a matter of leaping from one to the other; sort of like a giant game of snakes and ladders. It’s ladders when we and the GPS are on the same page and snakes when we have disagreements. We happily zig-zagged westwards, finally reaching the coast at Awakino. Our route never quite arrived anywhere very big on the way. This meant we didn’t see any fuel stations as our supply was diminishing. And when we did encounter one I’d forgotten what they looked like and then we were past and it was too late. I made noises about the likelihood of more soon and of course there weren’t. By this stage the rain was welcoming us to Taranaki in typical fashion; and the fuel filter light came on indicating continuing problems with the fuel system. It wasn’t a great afternoon!

We’d come to Taranaki to catch up with friends and see the new Len Lye Centre. But first we had to go see the truck people just north of New Plymouth. We left Suzi with them and did a bit of shopping and then went back for one of those you-better-sit-down sort of talks. She needed parts and parts needed to be ordered but it could all come together in Hawera where their other workshop was. We were going that way anyway so that became the plan.

Later that day we finally made it downtown, to approach the Len Lye Centre. This is a new art gallery building to complement the Govett-Brewster Art Gallery which it is joined to. We’d enjoyed the Govett-Brewster Gallery on a previous trip and learned a bit about Len Lye, described as a filmmaker, sculptor, painter and poet. He is probably better known overseas than he is in New Zealand.

The Len Lye Centre has only been open for a couple of months and the people of New Plymouth seem to be in two minds about the usefulness of the project – see the linked newspaper article, particularly the comments section below it. I’m part of the flocking photographers group, and I’m sure there will be many more. 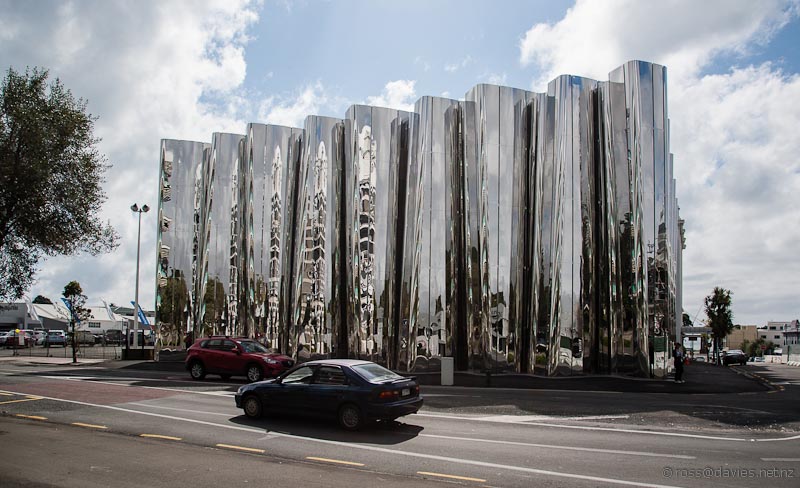 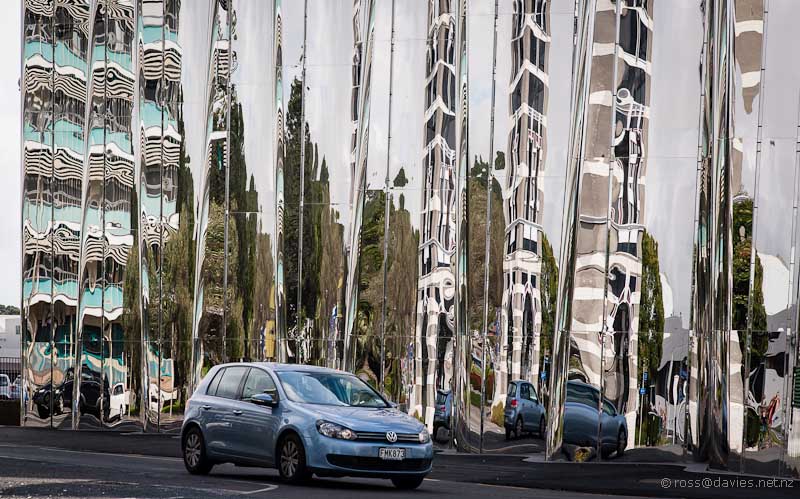 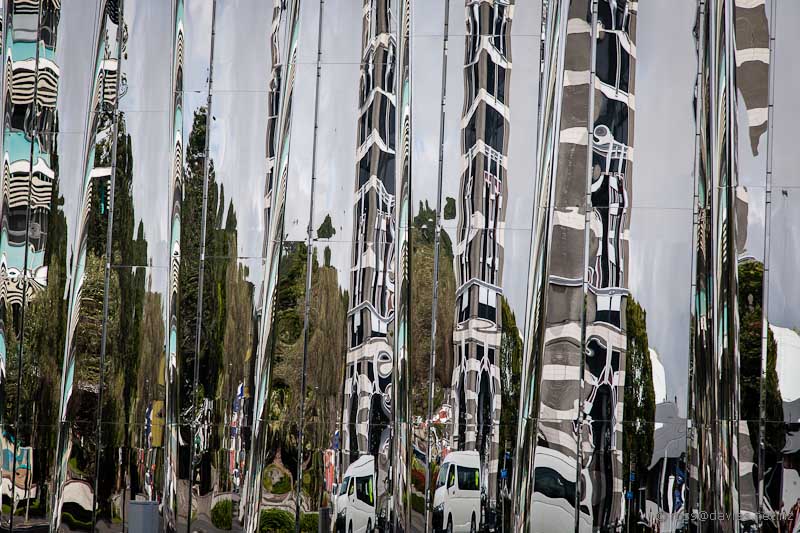 Len Lye Centre New Plymouth – is it wrong to love a building? 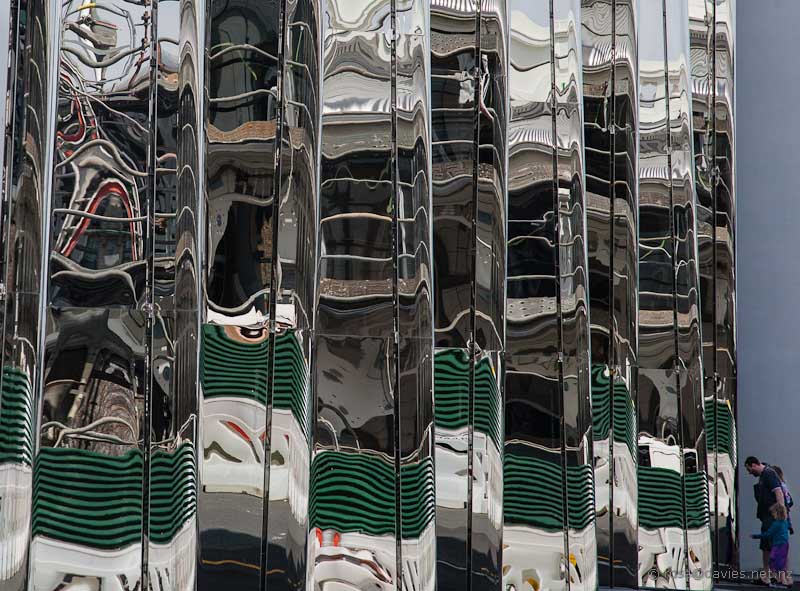 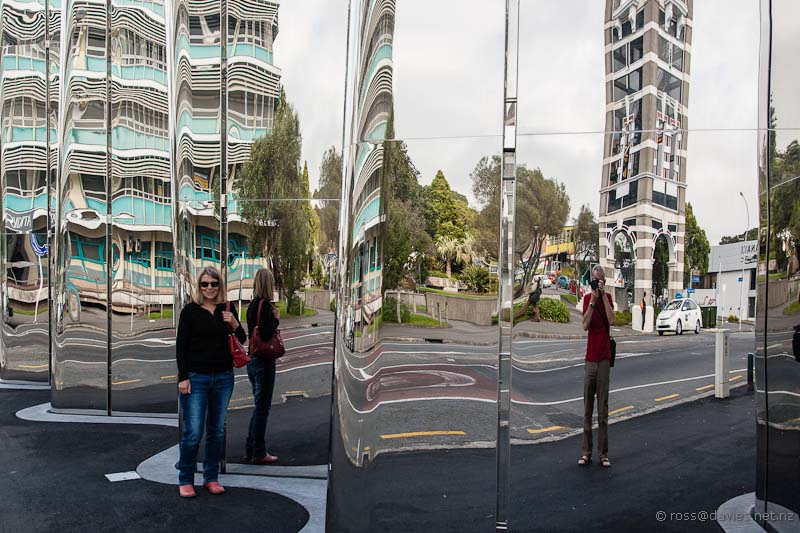 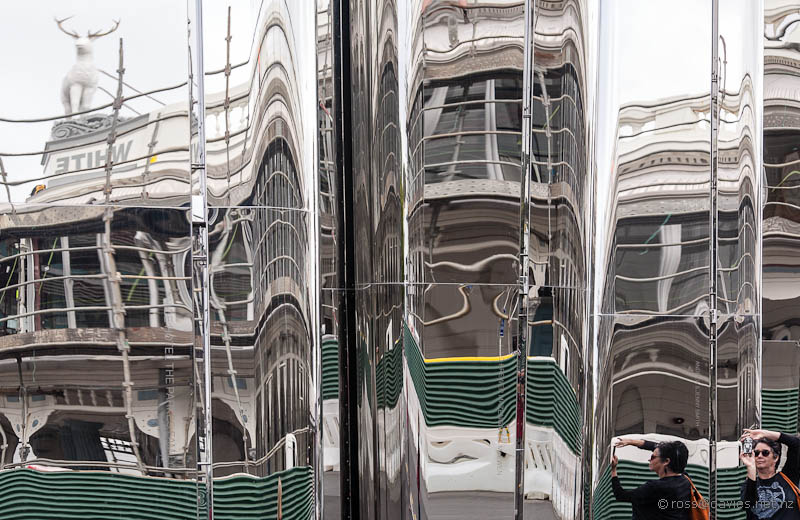 There are some great effects from different parts of the building with all the crazy mirrors and angles. We found the tall short car images repeatedly funny. Below is a very short video of one of the views – try it on Repeat as that’s sort of how it works in reality.

Wyn finally dragged me away from the outside and into the inside. I fell in love all over again. There was a focus on Len Lye but not just on his kinetic sculptures. He was  an artist with many facets; just like his sculptures. You quickly realise that these are not just random bits of metal thrown together. These are carefully engineered bits of metal that performed art. And his animations were extraordinary. And I haven’t even mentioned his paintings. 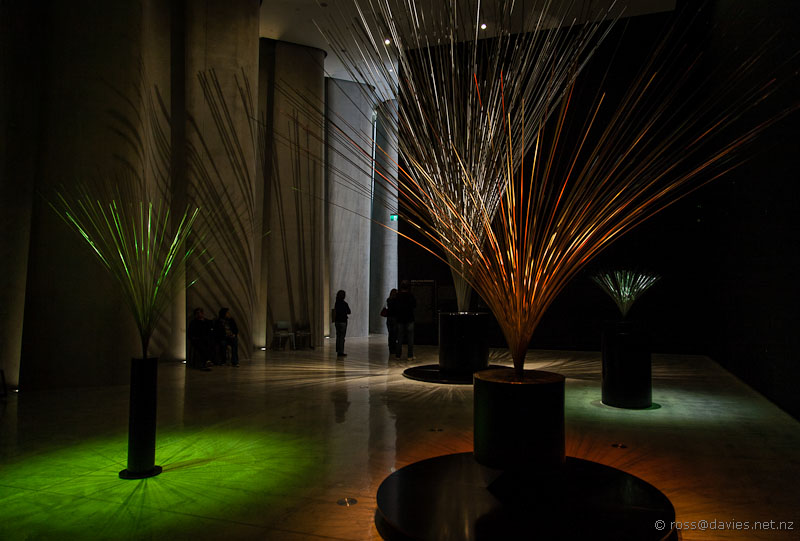 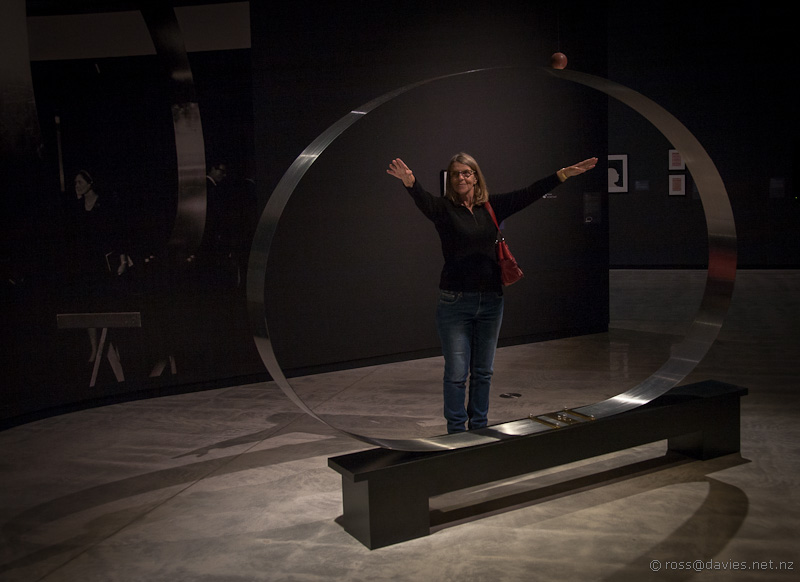 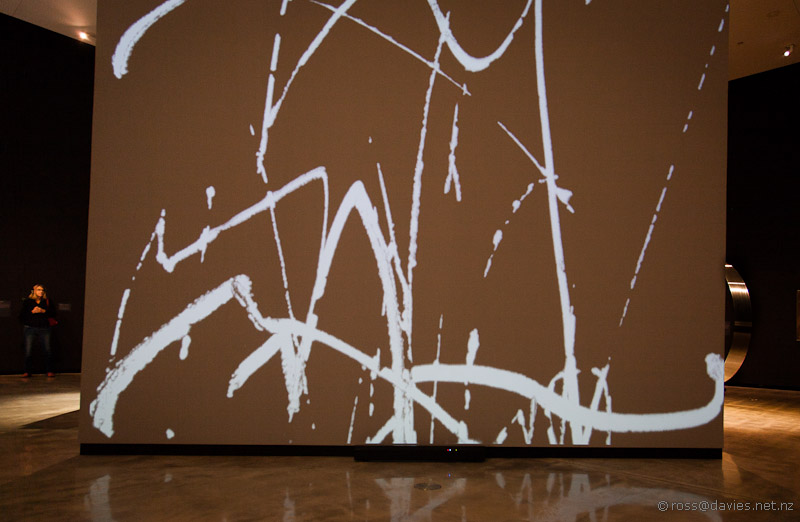 Len Lye animation, Len Lye Centre New Plymouth – a single frame of a moving masterpiece – somehow it works even at this level. 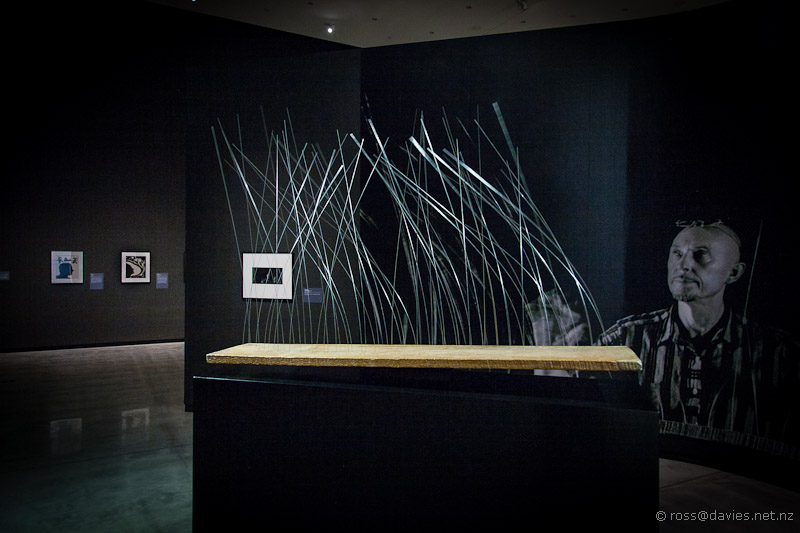 And then I noticed the interior of the building. And fell in love again. It is worth a visit just to spend some time contemplating the building inside that mirror exterior. 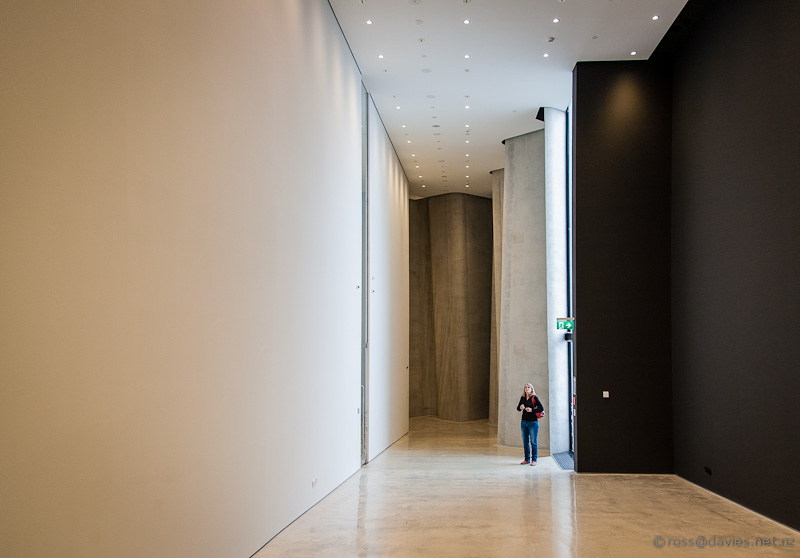 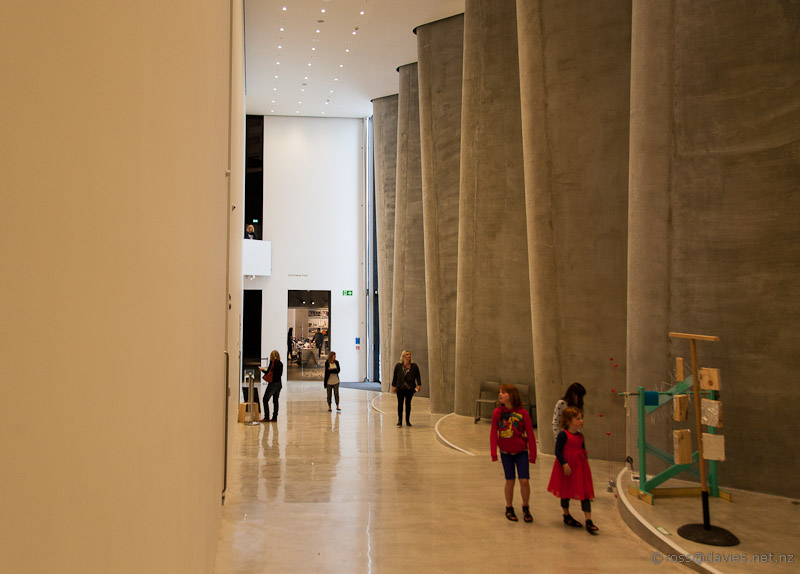 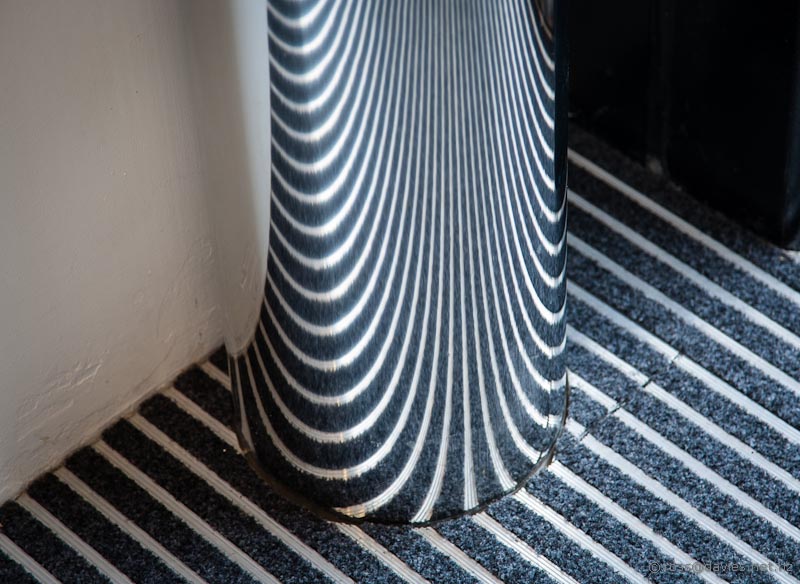 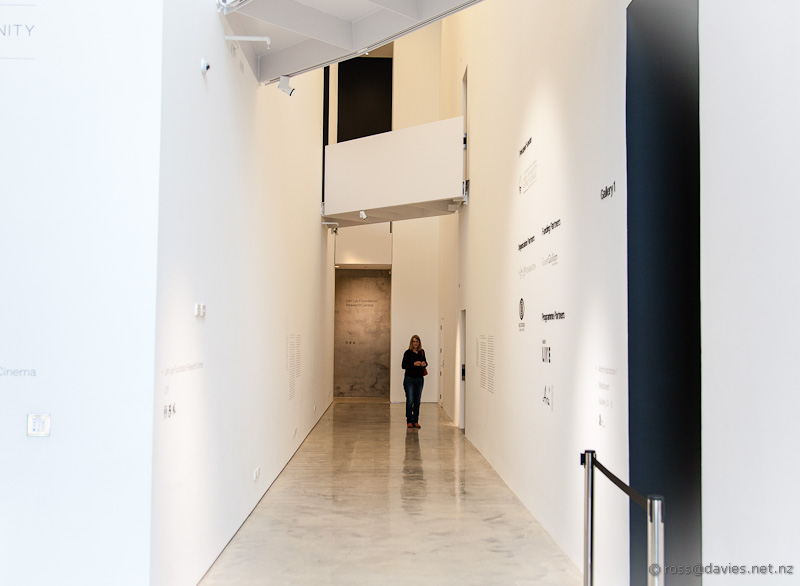 Wyn finally coaxed me out the door with one last parting photo of the exterior. 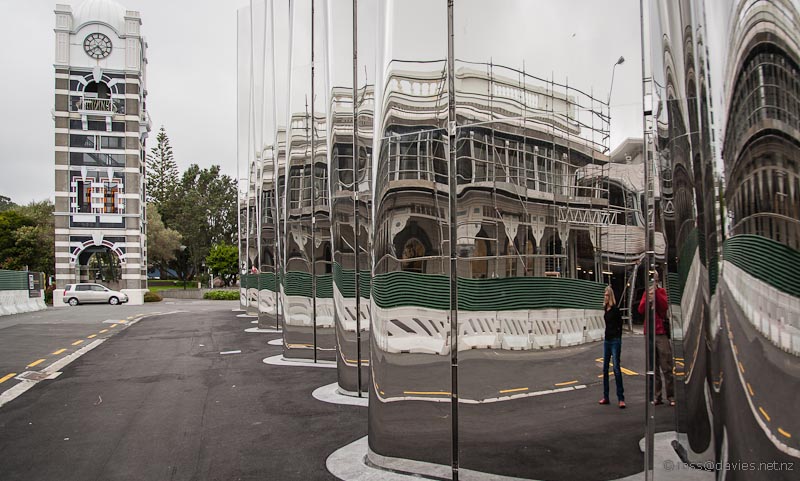 We went for a wander around the  nearby streets and along a short section of the lengthy Coastal Walkway including the Len Lye Wind Wand. 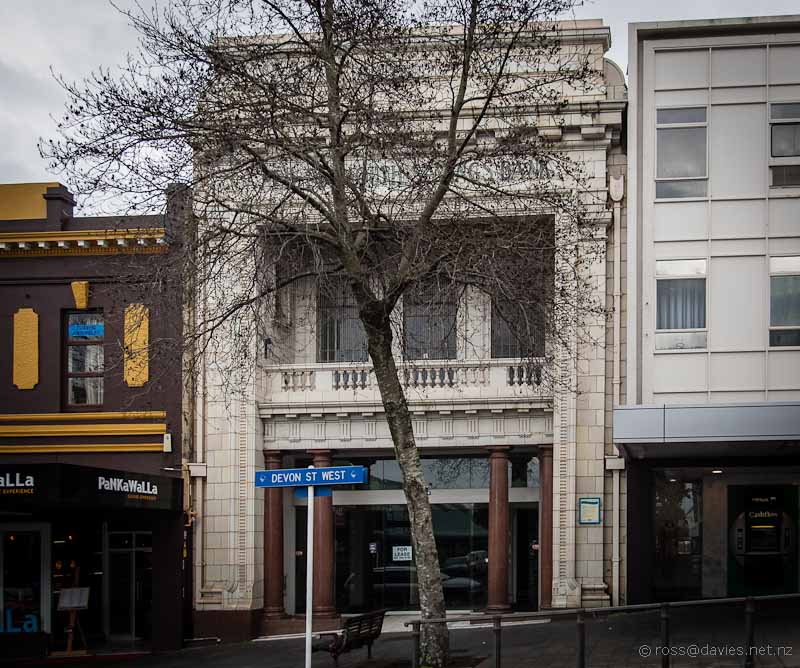 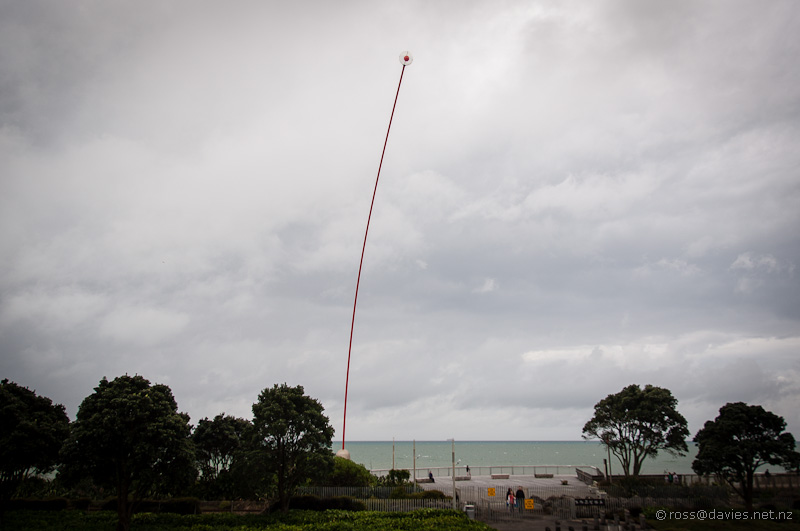 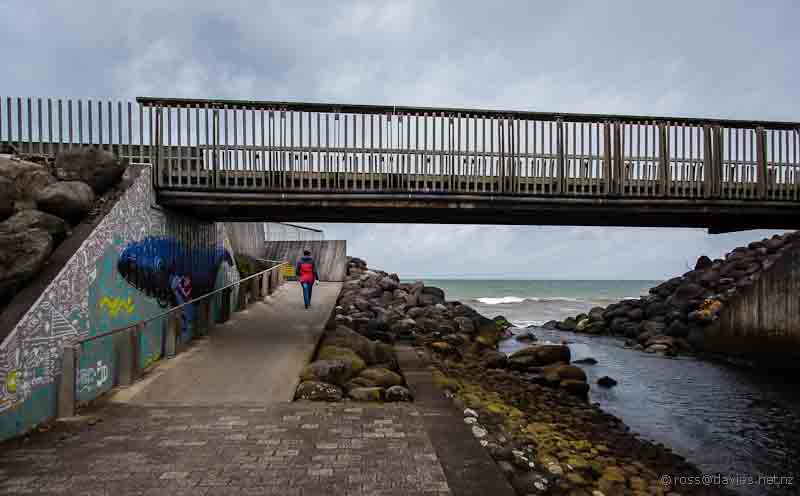 I can understand the reticence of some New Plymouth residents about paying for the Len Lye Centre. Many of them were also originally concerned about initial construction of the Coastal Walkway; now highly used and supported. It does look like the ratepayers contribution to the construction of the Len Lye Centre was small compared with things like stadium building like Dunedin’s. And given that it is serviced out of the adjoining Govett-Brewster Gallery, operating costs are not likely to increase hugely. The Len Lye Centre seems likely to attract a steady stream of visitors who will more than pay back the initial costs.

In any case New Plymouth is fortunate to have the Len Lye Centre as a source of inspiration; showing that Art is not just about paintings on walls. Generations can be inspired by the diversity of Len Lye’s works, just as the Len Lye Centre has been. The building literally reflects the city that surrounds it; it gets Art out into the streets. If only other new buildings could be even half as much fun. 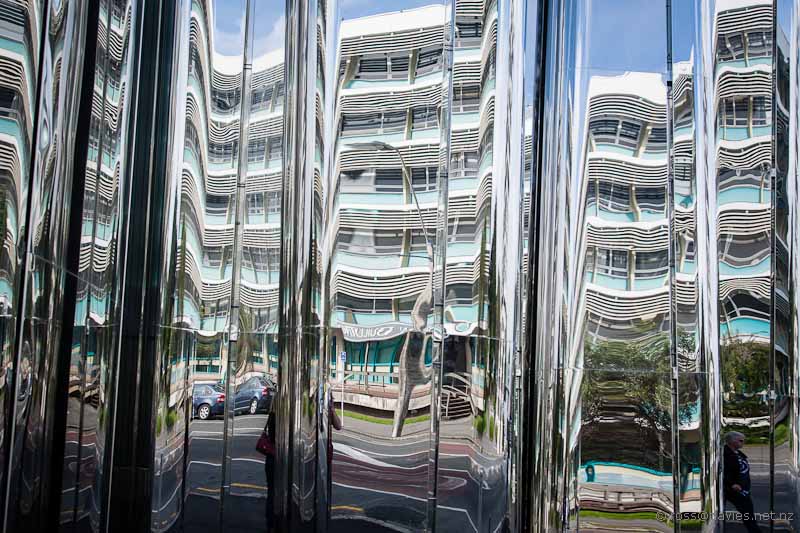