Did I Mention Hills and Hot Pools Already? – Waikite Valley

On our last night in Tauranga we stayed at Sulphur Point down by the harbour which is one of our many home-away-from-homes. Our departure from town next morning was a bit disastrous; fuel contamination which is a long story getting longer. Eventually we headed for Rotoruato catch up with friends there. We took the new toll road from Papamoa that by-passes Te Puke so we could try it out after having watched it being constructed for a long time. Of course we made a mental note to go on-line and pay the fee before we forgot and once more we forgot before we remembered!

We stayed the night in the new NZMCA park at Ngongotaha; I made an observation that I’d seen longer aircraft landing strips. In any case, it’s got plenty of room. 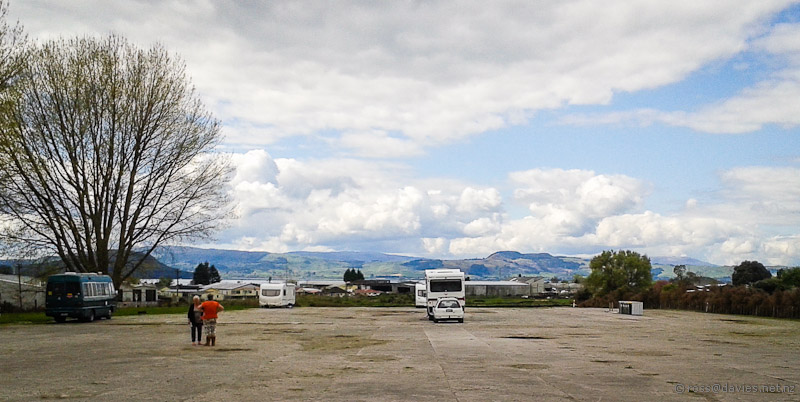 Parked up at Ngongotaha at Rotorua – there’s even a view of the lake.

Next morning we headed south on SH5, bound for the hot pools at Waikite Valley. These are our favourite hot pools of all. It is a lovely small complex that we can park up beside and use as often as we like while we are there. Our GPS took us another silly way to get there and got closer still to being thrown under the front wheel and driven over very very slowly.

We reached the hot pools without an actual mutiny and parked up and were soon soaking warmly and happily. But then our thoughts turned to walking and hills and soon enough we were heading down the valley in the car back to SH5 and Rainbow Mountain. This is a good walk with a great view which we’d done back on 2009 and we set off to repeat it. It is a volcanic mountain with steaming crater lakes and steaming holes and lots of interesting colours. The Maori name was Red Ochre Mountain and it was a valuable resource with the red ochre able to be traded. It was used with fish oil for painting wakas and meeting house carvings and as an insect repellant. 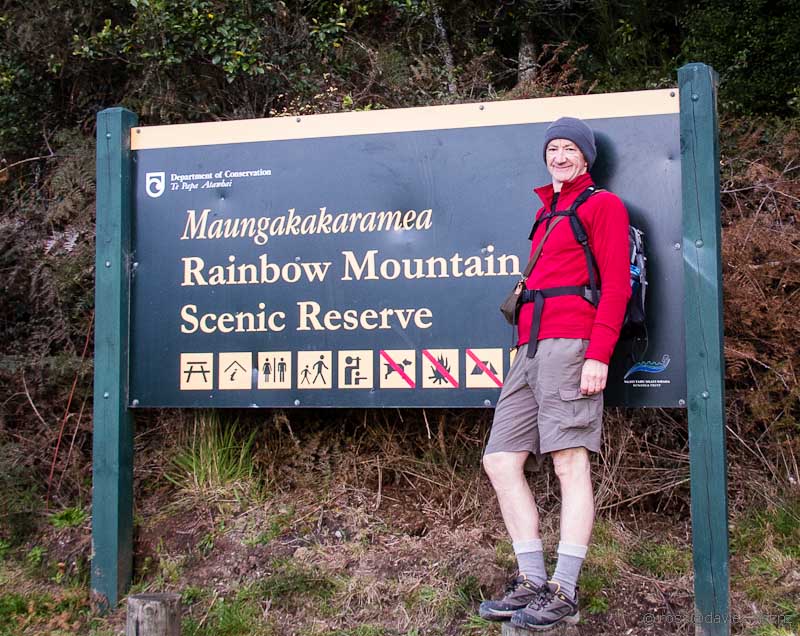 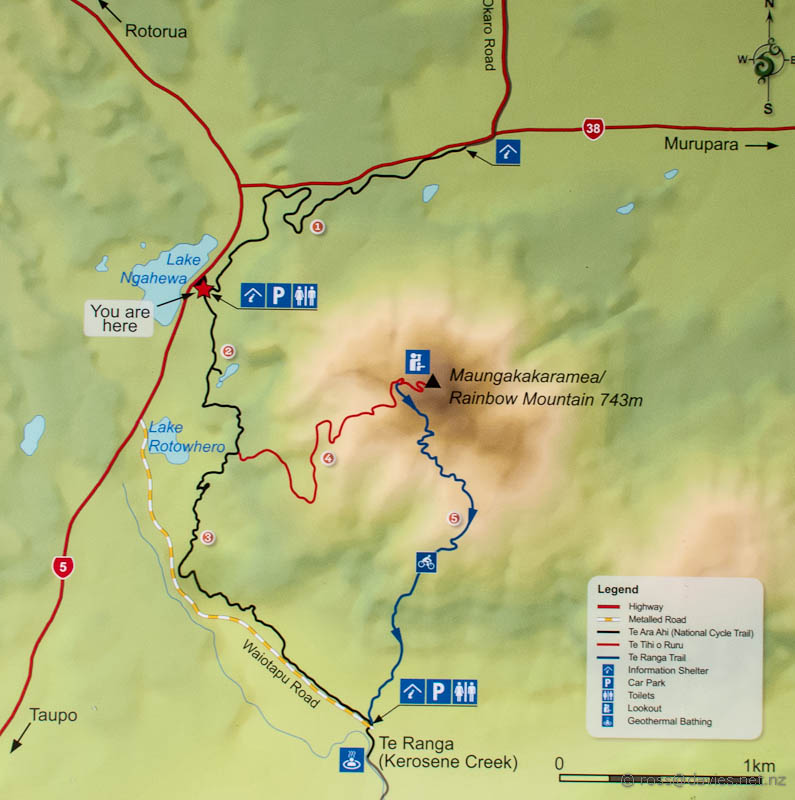 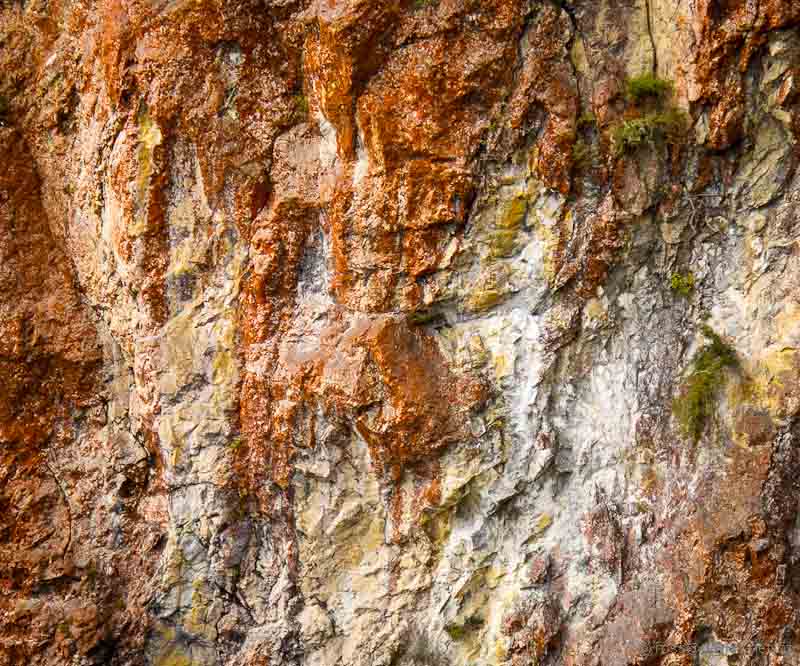 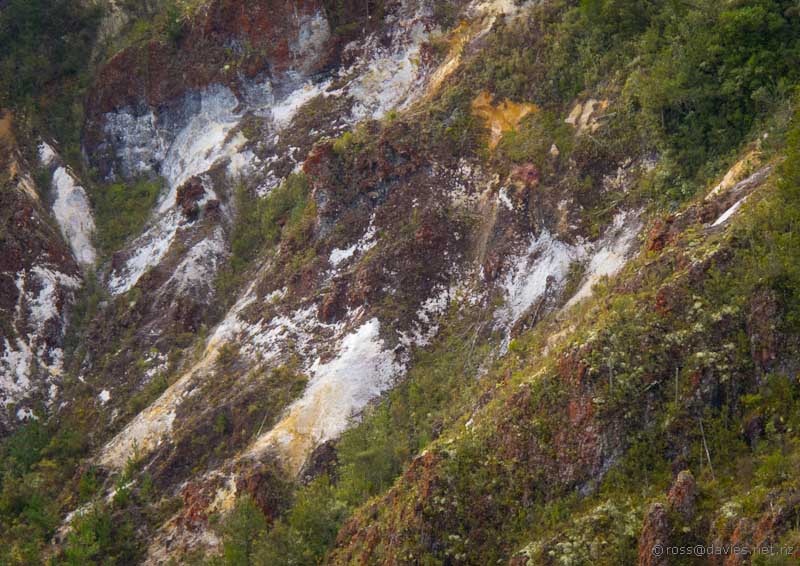 South from Rainbow Mountain. Mt Tongariro is the snowy volcano in the distance on the right. 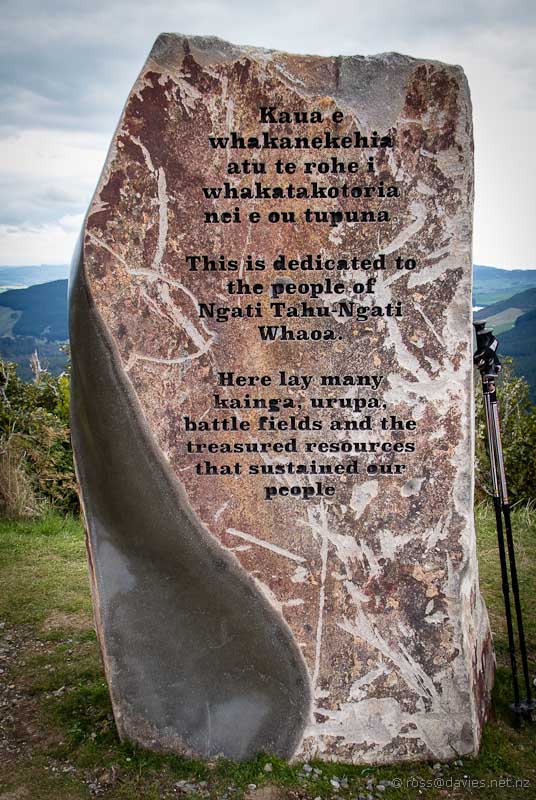 Poignant memorial on the top of Rainbow Mountain 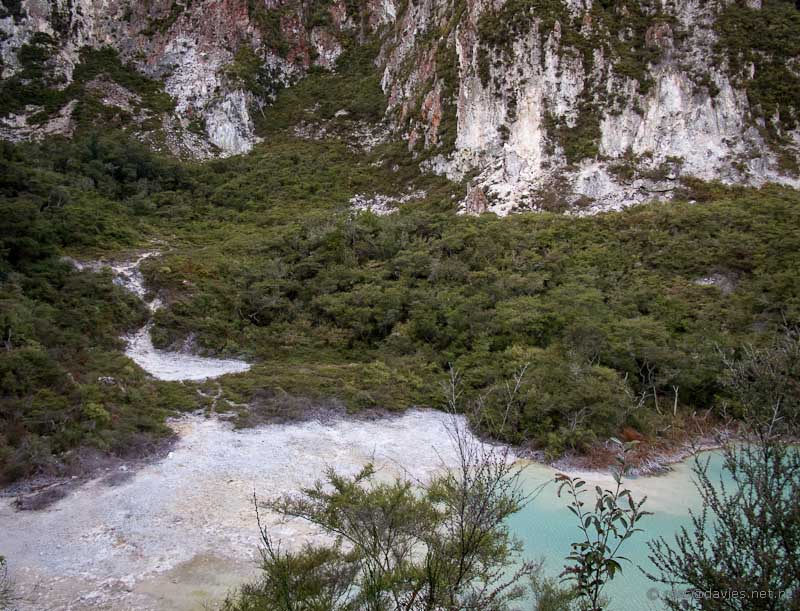 Crater lake on lower part of Rainbow Mountain quietly steaming away as were parts of the cliffs.

We got back to the car with the day running out but we made a quick trip to nearby Kerosene Creek which has long been a free hot-water stream. We’d not been there before because it had a terrible reputation for theft from vehicles parked on the road while the occupants bathed nearby in the stream. I used to call it bandit territory. The short road off SH5 to the creek is unsealed and we struggled to recall a similar sort of road anywhere in the country that is as badly maintained. Much of it is an extensive collection of potholes.

There were a lot of vehicles parked by the short track even as the sun was going down with lots of happy bathers in various parts of the stream. 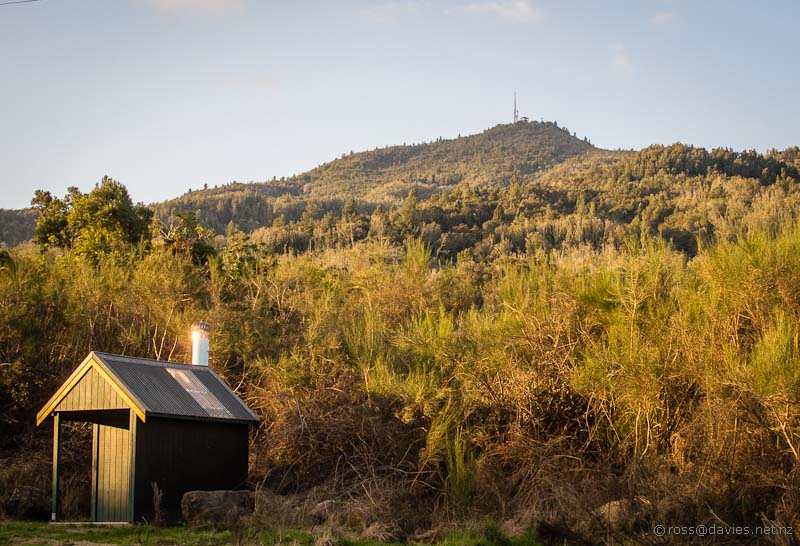 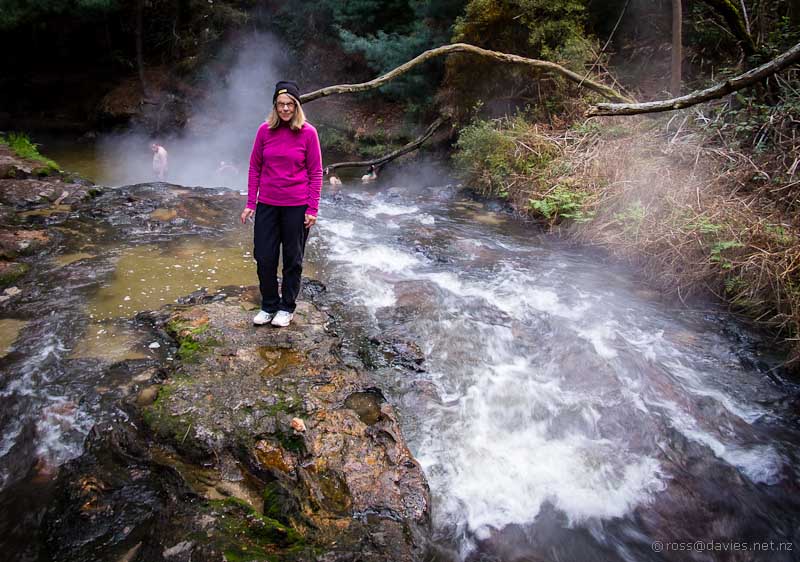 Kerosene Creek – the little stream that is not too hot and not too cold.

We returned to Suzi motorhome at Waikite hot pool for tea and an evening soak. And next morning we had a morning soak before we moved on. 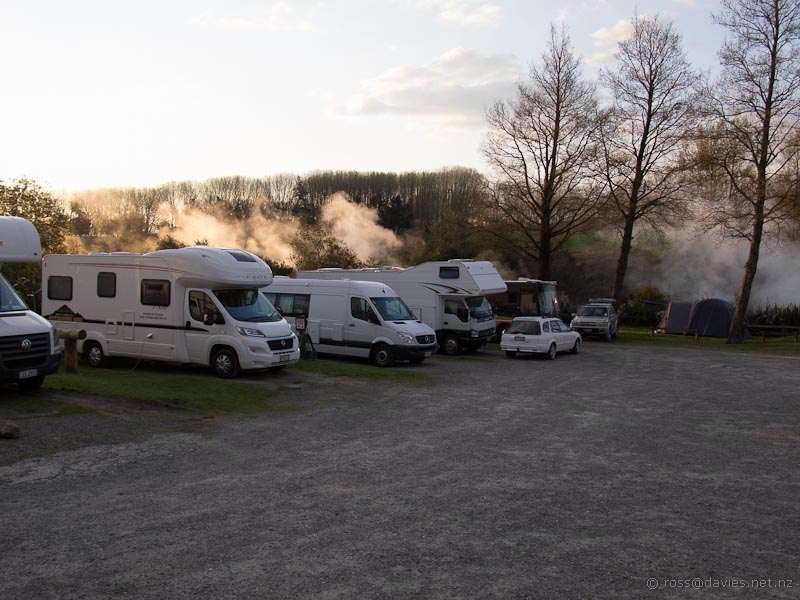 Parked up at Waikite hot pools. The stream that goes past there is very hot. 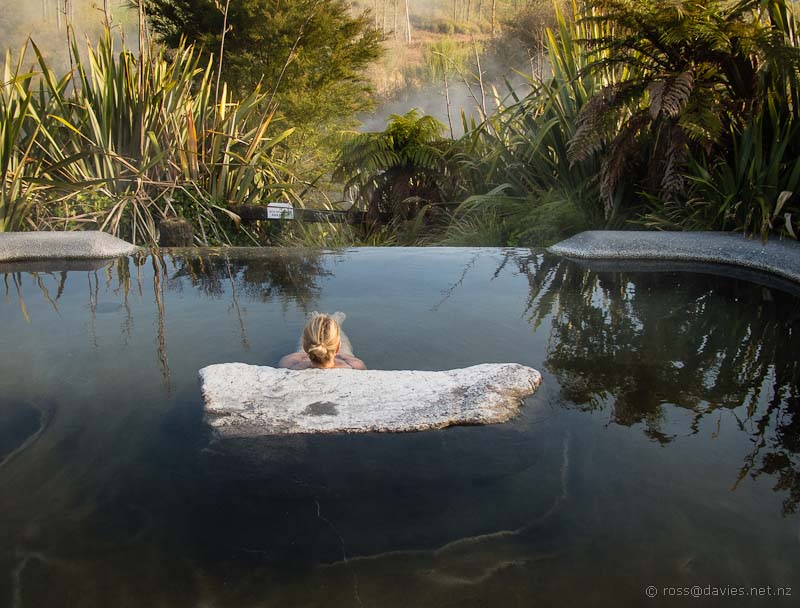 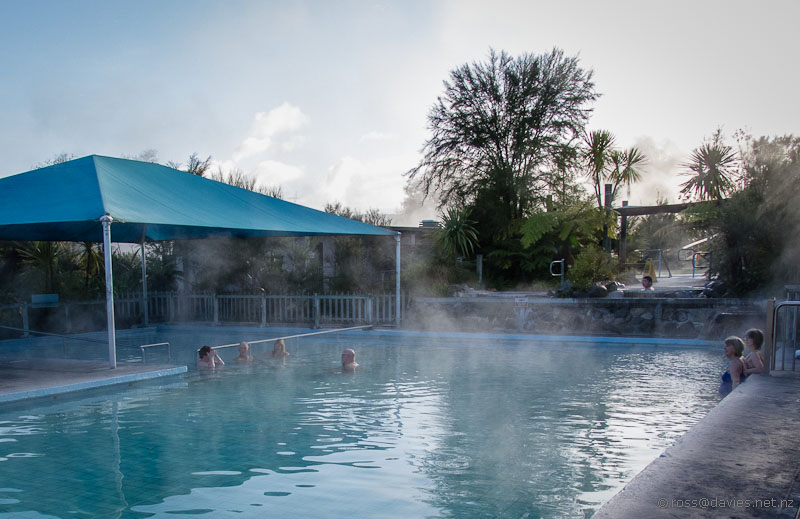 4 Responses to Did I Mention Hills and Hot Pools Already? – Waikite Valley